A City’s Flying Gardens of Maybe

Right about now you might be hearing the squawking calls of Canada Geese as they fly in crooked Js or balanced chevrons across the sky. Many of them are heading toward warmer climes as part of a fall migration they’ve done, collectively, tens of thousands of times before. But for any creature making a journey, there are hazards.

Kate Cummings’s post “City Along a Flyway” on this blog last year spoke eloquently to the ecological interruptions that the sky-scraping and “Bright Lights” landscape of Chicago poses to bird migration. It turns out the glassy-surfaced architecture can look like nothing but more transparent air, or in other cases these surfaces can create a myriad of virtual spaces. A Swainson’s Thrush flying toward what appears to be a bushy tree might in fact be making a straight line for an unforgiving sheet of glass simply reflecting the foliage behind her…

In the night hours, tall building lights can create not only visual confusion, but also false navigational cues much more perilous than the ones that the moon and stars provided for millennia preceding Edison’s bright idea of light bulbs. The 9/11 memorial lights at the World Trade Center site in New York inadvertently created a luminous trap for migrating birds in its powerful beams a few years back. Various “lights out” programs in cities across the country together with the work of organizations like the Fatal Light Awareness Program (F.L.A.P.) in Canada are initial efforts to minimize the collision between urban and migratory lifestyles, but in the meantime we know the avian flux and flow will continue to suffer blows.

While I am familiar with the sparrows, thrushes, waxwings and other birds that fall victim to building strikes, a conversation about seeds with a friend last year led me to consider a whole other ecology that is also interrupted—that of the plants whose seeds are seeking safe passage in the bellies of birds. These seeds are effectively hitching a ride in a feathered vehicle and dispersing to new territories. After all, this is the conceit of the fruit that flowering plants fashion: attract animals to eat them, and in that process, carry their seeds within the fruit to new places. Plants, for all their rooted sensibility, are fundamentally mobile too.  With every bird that dies en route to some other place, the diversity of seeds it carries fall short of some possibility of finding suitable soil, at least in theory.

I thought about how I might dig more meaningfully into this idea, and a number of connections started to flit and link… Kate talked about the important work the Chicago Bird Collision Monitors (CBCM) do in collecting birds throughout the city. As she mentioned in her post, injured birds can be brought to rehabilitation centers and, if all goes well, shepherded back to health on the wing. But what happens to the less fortunate ones? Many are brought to Bird Lab at Chicago’s Field Museum of Natural History, where they become part of a behind-the-scenes collection and part of a growing data set on bird migration. They are identified by species and sex and their skins and skeletons are carefully prepared by volunteers and staff at the Bird Lab, all under the direction of collections manager Ben Marks and emeritus collections manager and CBCM founding member David Willard. 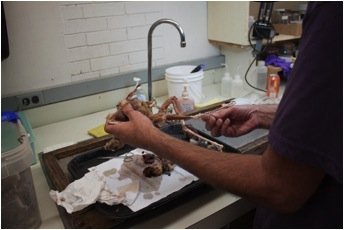 Knowing the bones and skins found a final resting place, I asked David what might happen to the birds’ guts, only to find out they are usually disposed of. With a generous spirit of collaboration David started saving the stomachs of these building-struck birds for me and I began a project of dissecting and collecting the seeds to form a small archive of botanical possibility. But what to do with the seeds?

So far, I have come up with a few possible routes to reactivate ecological potentials and take the project from archive to experiment.

Having ruptured the vessel of the bird’s stomach to recover the seeds, I decided to make new vessels in the form of ceramic planting pots. Each pot’s design is based on the feathering pattern of a species, and in that pot I plant seeds found within one individual bird of that species. Will the seeds sprout? What are they even seeds of? The unknowns are many in what I am calling the “Flying Gardens of Maybe.” So far the germination rate is about 50%, as various grasses and small shrub sproutlings are emerging in some form of resurrection. 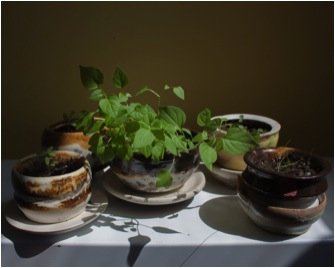 Some of the other seeds I mix in with commercial birdseed and put back into my porch feeder, to let them be taken up by other birds and have them continue the journey they never quite finished. And in some cases it is the representation that, par avion, continues their travels through postcards that document the seeds that were found in a given bird, in this case a Mourning Dove: 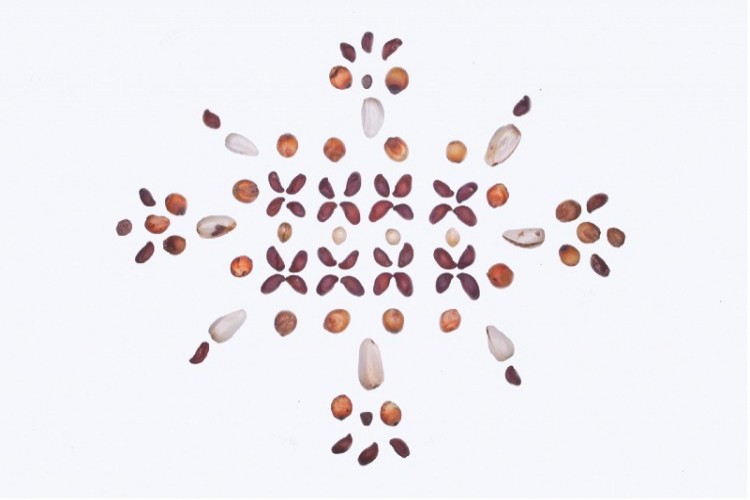 All together, it is a small experiment in trying to better understand the myriad of organisms, feathered as well as foliate, within the complex ecology of a city like Chicago. Every living process layers and links to the other. The question increasingly becomes what we might reveal and how we might reimagine the cohabitants in our urbanizing environments—for city creatures who are year-round residents, but also those just trying to pass through. 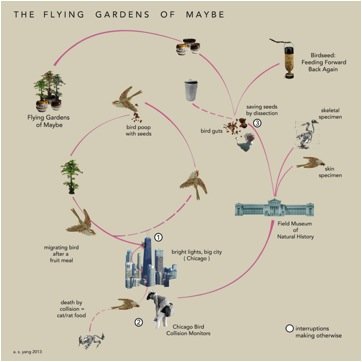 To learn about the Flying Gardens of Maybe project, please visit www.andrewyang.net/maybe.html.

The project is currently on exhibit at the Sullivan Galleries in downtown Chicago through October 11th as part of the group exhibition “Rooting: Regional Networks, Global Concerns” 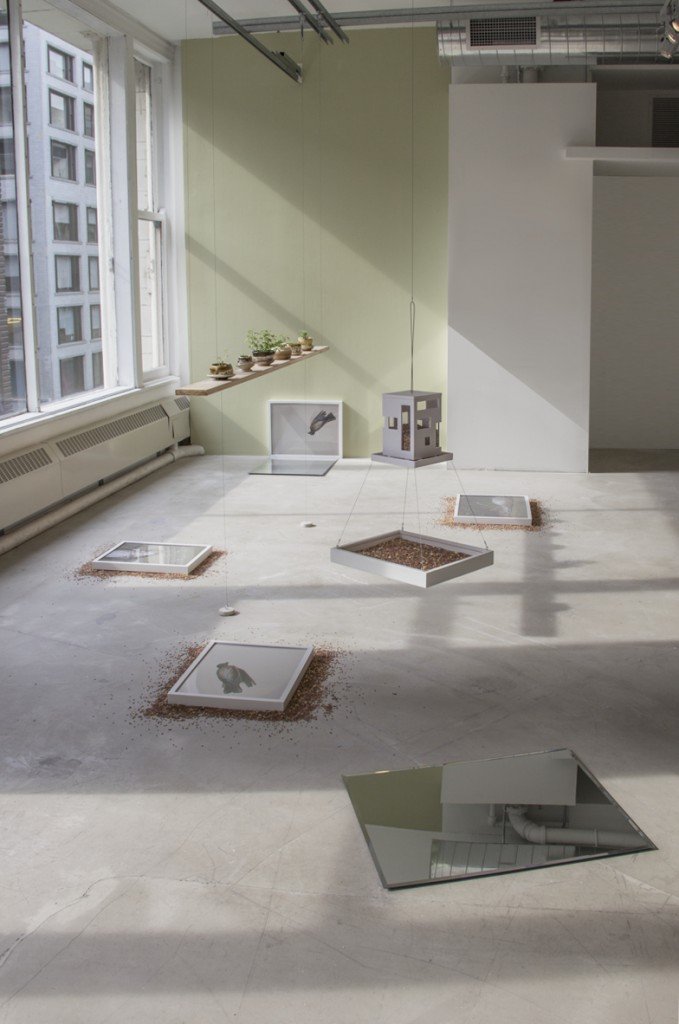