Pure white in the sharp sunlight of early morning, an egret struggles with a fish as big as its head. The bird drops the fat bullhead, pecks at it, picks it up, tosses it into a new hold, drops it again, over and over. A ten-minute job—is it trying to pick off sharp spiny whiskers before swallowing?

In the clear air of early autumn, the bird’s yellow bill and black legs are a stark contrast to feathers whiter than white. A dozen mallards lounging at the other end of the pier; a crowd of swifts chattering over the water; yellow-rump and palm warblers in hawthorns bearing dark red fruit; one, two wood ducks dropping into glassy water from low branches; the first gaudy color in small maples—this is a picture of the drama and the peace of the wild. 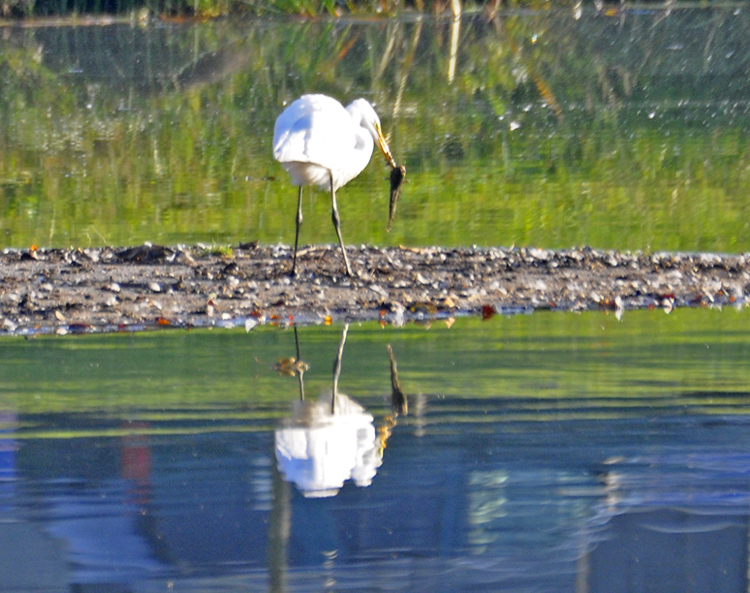 Is this perfect vignette playing on a backcountry lake?

No. Reflected along with the egret’s graceful form are cars on the boulevard just beyond the shore. Mowers trim lawns, saws and chippers rumble where a crew disposes of borer-killed ash trees on the golf course. From the far side of the park, the constant rumble of expressway traffic and the big rhythmic piston-like whoosh from a foundry firmly place us. Wilderness this is not.

I came here this morning for some relief from reading yet another disturbing treatise on our failure to deal with climate crisis. The park does its best as antidote. I didn’t burn any fossil fuel to get here, and walking itself always helps.

I could appreciate less urban din, but at least the chipper has gone quiet for the moment. And the dead trees—over four hundred already removed from this one park of less than a half-mile square—are yet another symptom of our impact. Keeping this oasis a haven requires management: lawns for picnics and fields for ball games; paths for joggers, bikers, walkers with and without dogs; manicured fairways and greens for golfers; and, yes, small but productive areas for trees, flowers, birds, butterflies, and nature nuts. Even the egret’s breakfast is a product of management for a very popular recreational fishery. 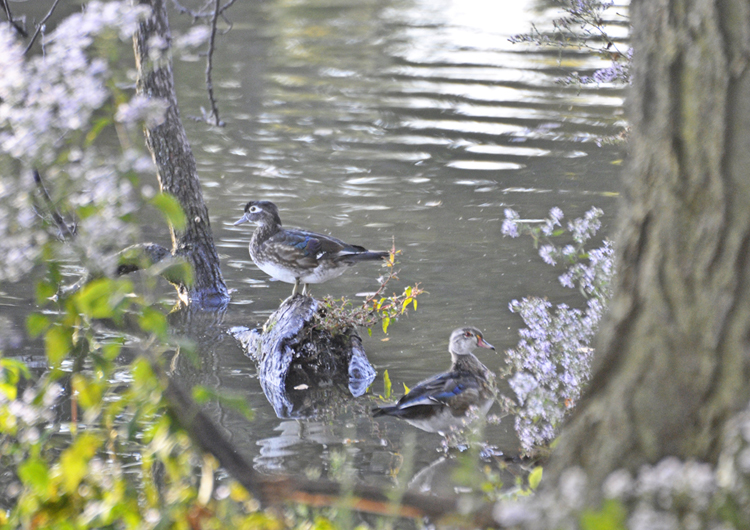 Management requires fuel. No one mows a golf course by hand. Ecological services come by trucks with power tools. Most park users, birders are no exception, drive here.

To care for a place, we must know it. Knowing is personal, being there. Want to get to know a national park? Fly and drive! Is this putting out fire with gasoline?

There is a general disconnect between what we love and the lives we lead. The reading that sent me here today, George Marshall’s Don’t Even Think About It: Why Our Brains Are Wired to Ignore Climate Change,* wrestles with this topic. A strength of this book, however unsettling, is Marshall’s review of how we process information and our ability to place conflicting facts and values into different compartments, in our heads and in our lives. There are, as the subtitle clearly indicates, disturbing biological reasons for our inability as individuals and society to deal with climate crisis. After 200-plus pretty grim pages, Marshall does offer a strategy for hope. It is not an easy one; it involves a daily struggle with conscience that is kept active by connecting to particular places.

December. Birds have been quiet so far this winter. I slip through the hole in the fence and along the edge of the golf course woods, a slightly different route. Maybe I’ll see a resident coyote. And there one is, taking a slow trot around the north side of the center woodlot. The coyote stops in full view to give me the once over, moves out into the open middle of the fairway, stops again, puts up its nose and barks. A strong performance goes on for a minute or more, and then stops as something catches its eye back up the fairway. Head down, the hunter starts a slow lope and then a dash—the squirrel doesn’t have a chance. What prompted the unfortunate critter to make that run across nearly a hundred yards of wide-open short grass? The coyote takes a few seconds to kill the prey and get a good grip, then lopes slowly southward and disappears at the small woodlot. 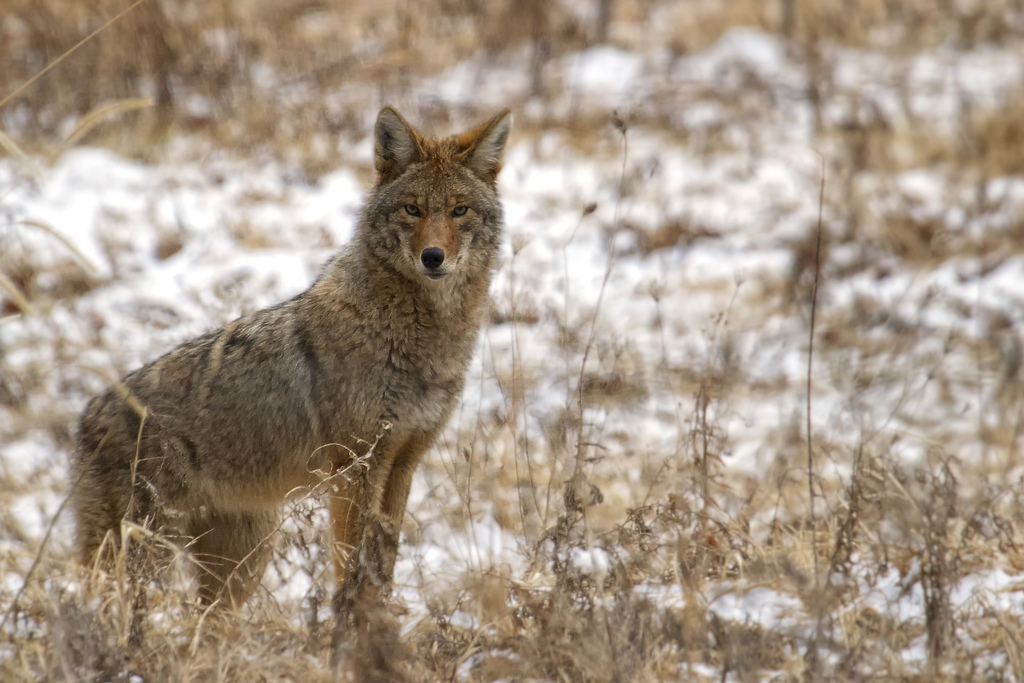 Chicago’s Columbus Park remains a haven, of sorts, even for the much-abused coyote. A couple years ago, four coyotes were killed by “authorities” after one was accused of biting a child of nearby residents. Was it a coyote or actually someone’s dog in the alley several blocks from the park? That’s another story of this less than perfect place. Coyotes and many other species make a living near us, sometimes with our help and sometimes in spite of our ignorance.

Every walk reminds me of our muddled relationship with other animals and the earth we share with them, but without these encounters, how would I be inspired to keep up the daily struggle to do my small part to make things right? In the closing section of Marshall’s book, he talks about the importance of personal connection and story in shaping public understandings of climate. Climate change is coming home; in the two short years since the book was published, the dialogue around climate has changed. We are at least talking about it. Havens like Columbus Park foster our connections to the earth, help us see the real impacts of our actions, and give us stories to share. 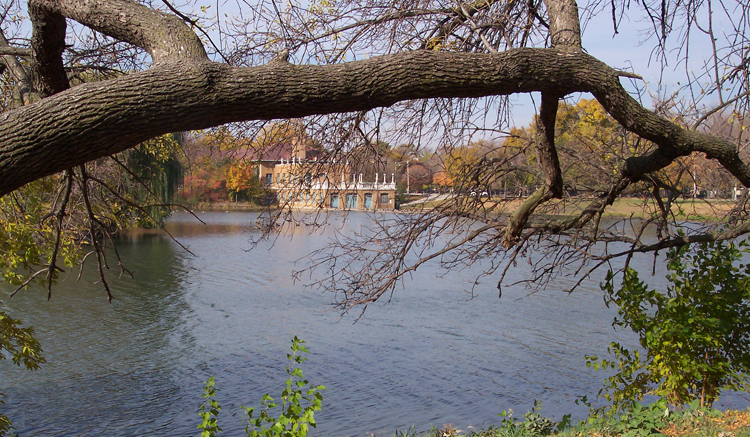 Is this morning perfect? Hardly, but it is as close as I will come today, or in many days. I linger as long as I can, settling my head again for routine chores and the business of daily living.

*Marshall, George. Don’t Even Think About It: Why our Brains are Wired to Ignore Climate Change (New York: Bloomsbury, 2014).

All images by John Elliott, except for “Coyote Takes a Break,” which is by Chris Smith, Creative Commons license 2.0.

This post is an expanded, modified version of an article that appeared in The Buffalo Bull (newsletter of National Association for Interpretation, Heartland Region) 27, no.1 (Winter 2014-15). Online: http://naiheartlandregion.weebly.com/uploads/1/0/1/4/10146667/2014_winter_buffalo_bull.pdf