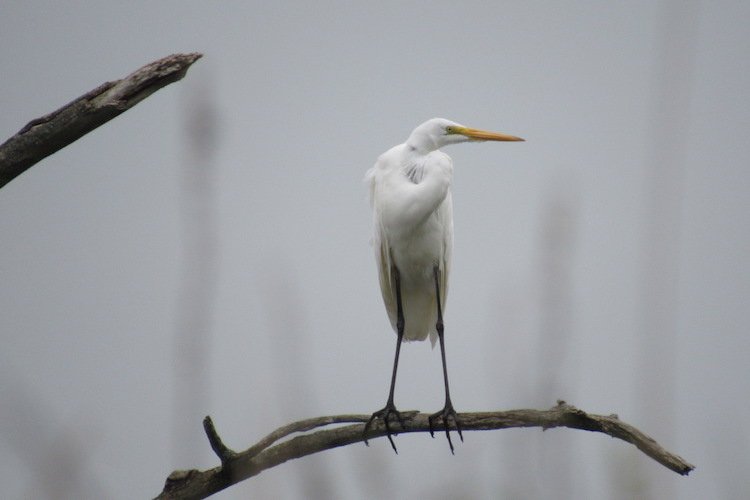 During spring break of my freshman year of college, I discovered that my eyes craved water. Growing up in the glacially carved landscape of Minnesota, it was rare that a car trip longer than fifteen minutes did not pass within sight of a lake. When I moved to Cleveland and the campus of Case Western Reserve University, such regular views faded from my life.

Situated on Lake Erie, Cleveland is certainly no stranger to water vistas. But water doesn’t permeate every neighborhood of the city in the same way that lakes and rivers do in Minneapolis and St. Paul. Furthermore, as a carless college student, my life was effectively confined to campus and the surrounding, mostly waterless, neighborhoods. While I reveled in the intellectual challenge and the freedom of being on my own, as the year went on, I sensed more and more that something was missing.

I wasn’t able to put my finger on it until I went home for spring break. While out and about that week, I found my eyes drinking in the sight of open water as though it satisfied a deep thirst. This is what I had been missing—water ever-present, just off the edge of my path, the sense of another dimension of life flowing around my own. 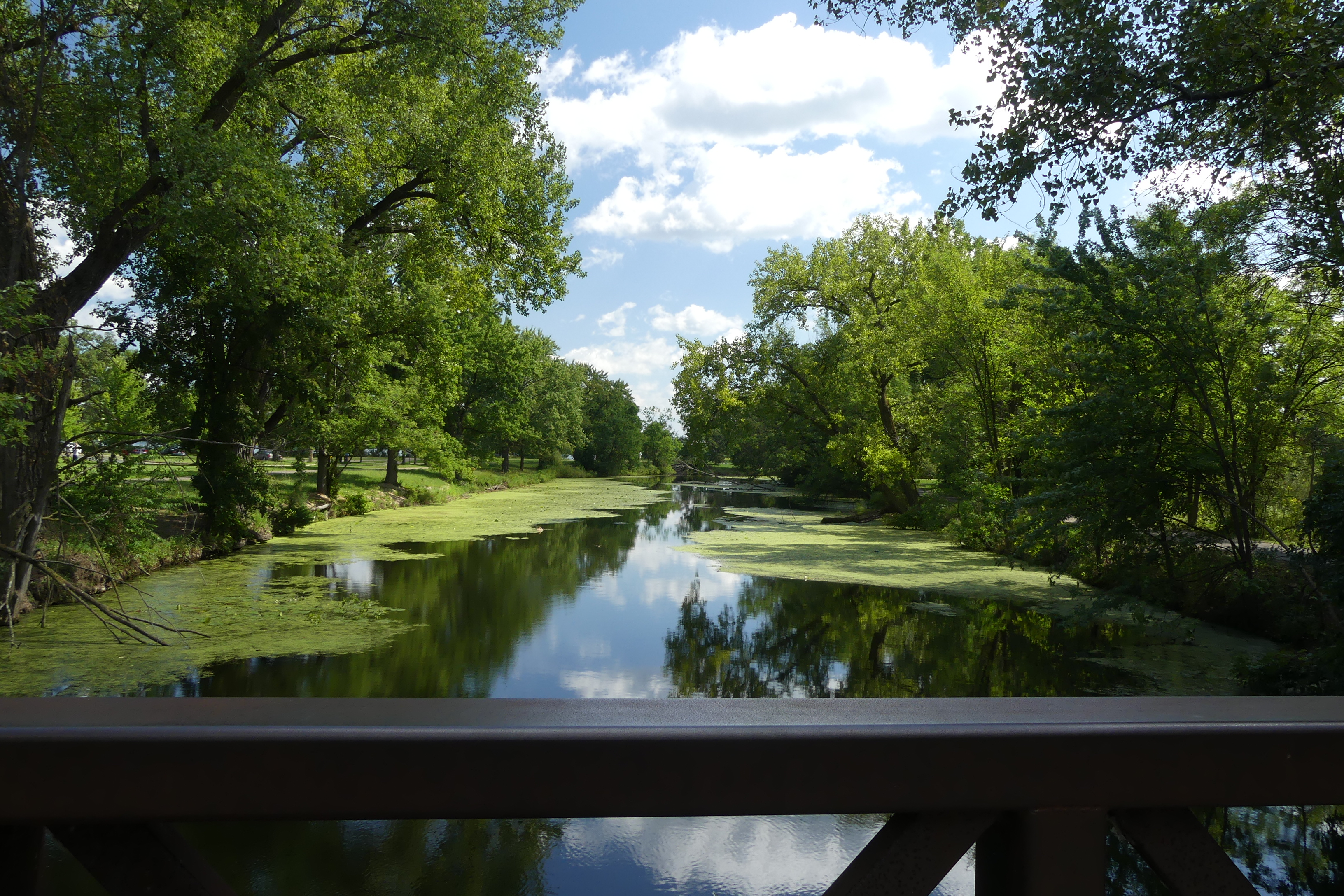 Twenty-some years and several cross-country moves later, like many Minnesotans, I have found my way back home. I now get my regular visual dosage of water, including while riding my bike over the Mississippi on my way to work every morning. Lately, though, I have found a deeper thirst in my soul: a craving to be on the water, to feel the rhythm of the water in my body. Recalling annual summer trips to the Boundary Waters during my childhood, I feel the urge to get in a canoe, to sit with just a thin sheet of aluminum between my feet and the water.

At three and six, my daughters aren’t quite ready for the full-on wilderness experience of the Boundary Waters. Fortunately, there are many places much closer to home to paddle a canoe around a lake. My daughters, my father, and I recently spent the afternoon in and around Lake Phalen, on the east side of St. Paul. Phalen is a decidedly urban lake, lying just three miles from downtown St. Paul and about a mile from two freeways. Given the lake’s central city location, Phalen is by no means wilderness. Rather, the lake creates a natural oasis, drawing residents from the surrounding neighborhoods to enjoy the water and the trees. The Twin Cities are well known for recognizing the value of urban green (and blue) space, and Phalen is no exception. Like many Twin Cities lakes, Phalen is surrounded by a park that offers swimming beaches, watercraft rentals, playgrounds, picnic areas, and trails.

Similar to lakes in the Boundary Waters, Phalen is part of a connected chain of lakes. A series of streams and canals links Phalen to Round, Keller, Gervais, and Kohlman lakes, making it possible to paddle mostly uninterrupted for several miles. Along the way to Keller Lake, there is even a mini-portage, where a sill under a bridge makes the water too shallow to navigate, and canoers must disembark and carry their craft around the bridge.

As my family paddled across the lakes and along the canals as far as the end of Keller Lake, we passed under a series of bridges. The bridges varied in size and construction, from narrow, artfully crafted, pedestrian bridges linking park trails on either bank, to large, utilitarian structures carrying traffic on major roadways. Each bridge was a reminder of the simultaneous separateness and connections between the aquatic and the terrestrial. I had passed over some of the bridges by car several times, and here I was in the same place, but with a significantly different perspective. We were travelling not in a parallel universe but in a perpendicular one. 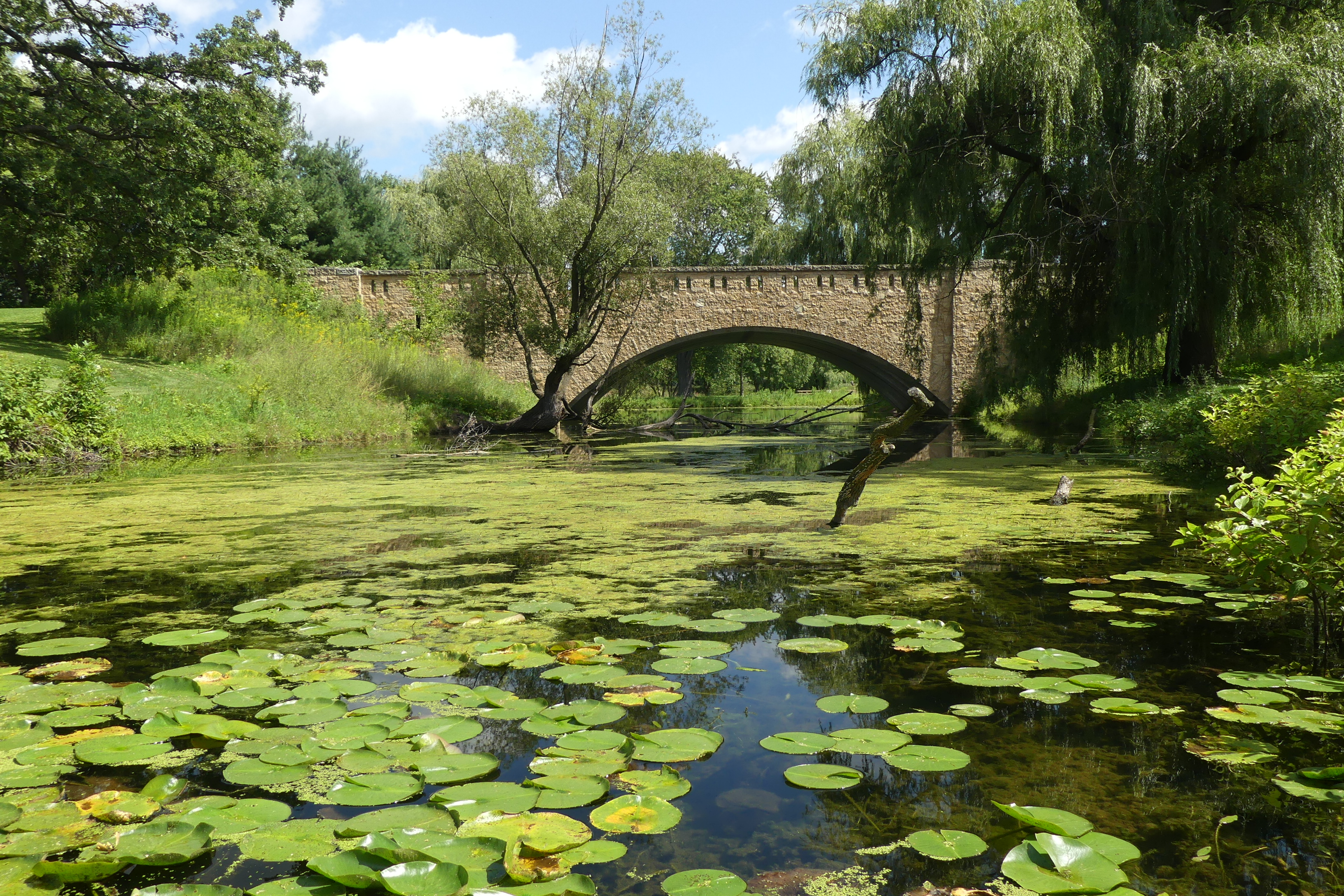 The aquatic world is populated by a different community than the terrestrial. When walking, I am accustomed to seeing bees, robins, sparrows, crows, squirrels, and rabbits. On the water, dragonflies abound, and we were surrounded by swooping, diving barn swallows with their elegantly pointed wings and tails. Under certain bridges, they dropped from their nests on the girders like so many feathered stones, veering upward just before hitting the water. A great egret passed overhead, broad wings a striking white against the sky. The egret hunted fish we rarely saw, but bubbles on the surface occasionally marked their passage. The same monarch and swallowtail butterflies that brighten my backyard garden flitted among the wildflowers along the bank.

When walking or biking, my legs move me forward. In a canoe, locomotion is powered by my arms. The soreness in my shoulders the next day attested to the novelty of that arrangement. Seated in the canoe, I was much closer to the surface of the water than I ever am to the ground on a stroll through the park. This proximity afforded a close-up view of the miniscule dimples water striders ride across the surface and the water lilies with their cupped petals raised in supplication. 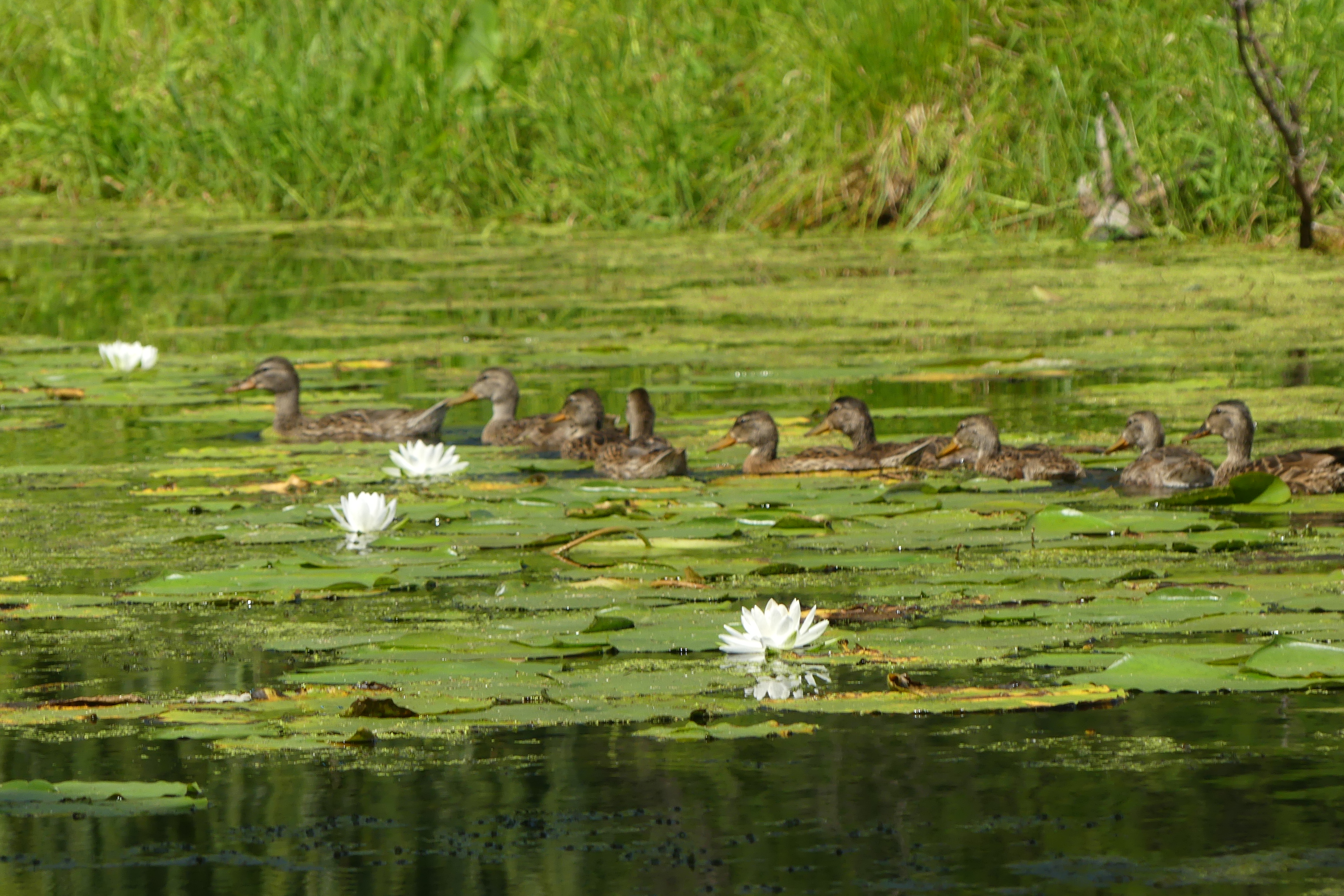 In many stretches, paddling down the canals was like paddling through Jell-O because the water was so clogged with weeds and algae. The long strings of stems and leaves that snagged on my paddle delighted the girls, and the mallards seemed to be enjoying their duckweed feast. But all that green represents an imbalance in the water community brought about by excess fertilizer running off lawns and golf courses. Even more obviously, empty cans and bottles floated among the lily pads. From the land, there is a mental disconnection that misses these physical connections between terrestrial lawns and aquatic weeds and between terrestrial litter and aquatic trash. But on the water, the relationship between the two realms becomes clear.

I practice yoga shortly after climbing out of bed most mornings. I find that focusing on my breath and stretching my body serves as a reset button for any physical or mental tightness that may be lingering from the previous day. Downward facing dog is especially effective, as I stand inverted, head down, hips lifting, heart melting, and weight distributed between my arms and my legs. A day on the water has a similar effect. By approaching the world from a different vantage point, I not only exercise seldom-used muscles but also awaken mental spaces that often lie dormant. Beyond simply seeing the lake from the road, entering into this other realm cracks open new vistas and invites new relationships. Being at the point of intersection, where the water meets the land, where the butterfly meets the swallow, prompts me to consider different perspectives and different possibilities. Surely the walleye under my feet and the egret over my head live in vastly different worlds—even more different than the surface of the water compared to a grassy lawn—yet am I not also connected to them?

Yes, in truth we are all connected to all of these spaces and all of the beings that inhabit them. We city-dwellers come to the water to relax and renew—paddling, fishing, swimming, or just enjoying the scenery—then return to our lives on land. Yet even as we drive over the bridge and along the road into our terrestrial world, the connections remain. Whether we recognize it or not, actions we take on land continue to affect the perpendicular universes with which our lives intersect. By returning to the water, I renew my awareness of these connections and deepen my relationship with the myriad dimensions of life.

All photographs accompanying the text were taken by Ken Ljung.