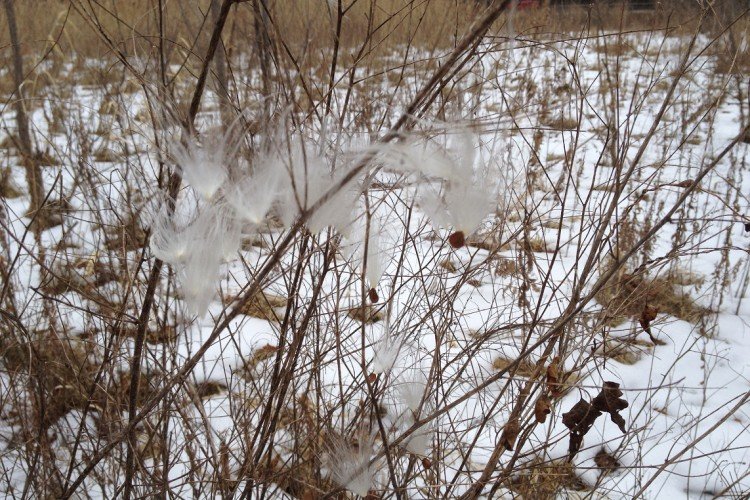 Today, one day past the Solstice, that pregnant time when what-was and what-will-be seem more closely intertwined than at all other times, conditions are favorable: chilly, wind picking up, lowering clouds, the smell of rain in the air.

A paper grocery sack full of seeds has been sitting in the kitchen by my back door since late October, awaiting this day. The contents of the bag: four months’ worth of seed collected (with the site stewards’ permission) from the various forest preserve sites I visit along the Des Plaines River. Rudbeckia, Echinacia, cup plant, rosin weed, prairie dock, milkweed, goldenrod, aster, Helianthus, bee balm, big and little bluestem, Indian rye, bottlebrush grass—you name the common native prairie or savanna plant and I might have some.

To gather seed, I’d go out on a workday or a walk, bringing little bags and old paper envelopes, collect (not too much at a time), and add to my home stash. The whole effort was distinctly unscientific, even haphazard. I didn’t keep track of species collected, where they came from, collection dates, percentages, or weights. It sufficed that they were native and collected near the Des Plaines within biking distance of my home. And there the bag rested, waiting, while I tended to other necessities, such as processing the pie pumpkins from the farmers’ market; clearing the raised garden bed and sinking into it the pots of baby Osage orange trees to spend the winter covered with hay; piling fallen leaves on the compost heap; and baking the Thanksgiving pies and Christmas fruitcakes. My plan was to overseed a certain spot in a certain field, and I knew it should be sometime in December, but I waited for the right weather, just before rain or snow. 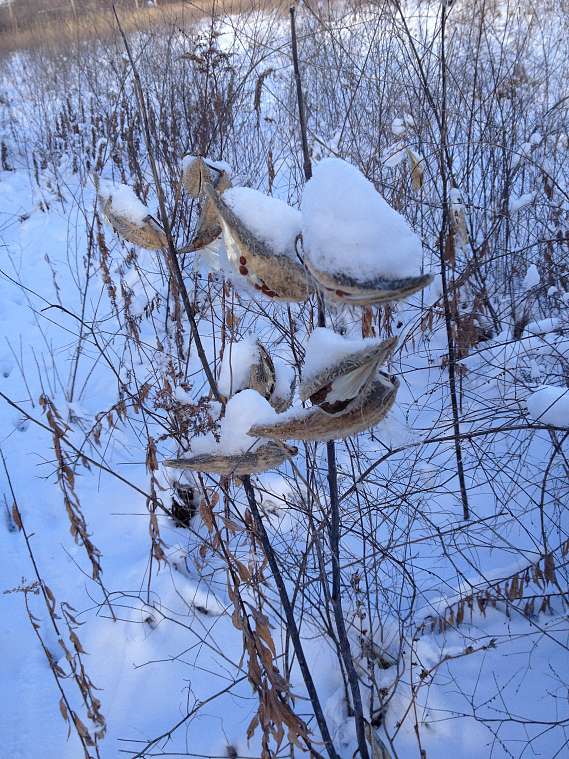 The day after Solstice, the time is right.

On my way to the field I walk through a tiny woodland with a creek winding through it that somehow preserves the old contours of the land. Until the early 20th century, or just before, the creek flowed freely from its beginnings a couple of miles west of here. Subsequently it was ditched and ultimately covered. Currently it emerges from a large, broken down culvert, makes its way through a miniscule valley until it passes under the road, through another culvert next to a muddy unused equestrian underpass, and enlarges into Des Plaines bottomland. Once a friend and I looked through that underpass to the woods beyond and saw a coyote assessing us in that alert intent way they have that makes those old stories about Coyote Trickster seem inevitable. 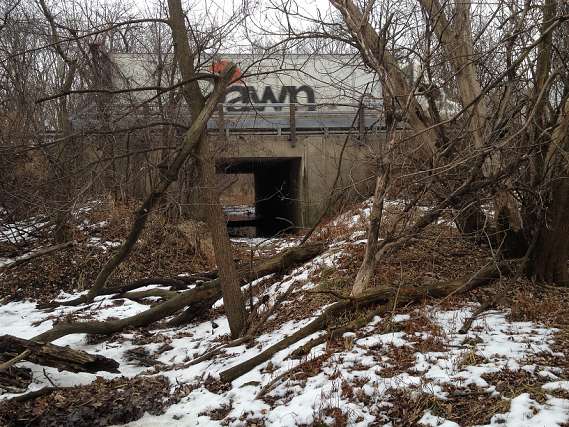 The woodland is more open now than when I first went there a few years ago: dead ash trees felled early this past summer lie across the creek banks, prostrate amid oaks old and young. The plant composition has already begun changing. Here I scatter a few seeds and tread them into areas of bare earth. It’s easier for prairie plants to take hold in a savanna than for woodland species to creep out of the shade. The bulk of them I carry into the field by following a well-used animal path between the tall grasses and forbs, noticing prints and scat, passing places where the deer have rested and flattened the tan grass. I begin to sow, flinging some seeds low across the air, scattering some in areas of bare mud, treading gently upon them, and adding my own tracks. Trucks roar by. An airplane motors northwest towards O‘Hare, regardless of prevailing winds, its straight, inclined flight and rigid body the antithesis of Bird. The clouds thicken. 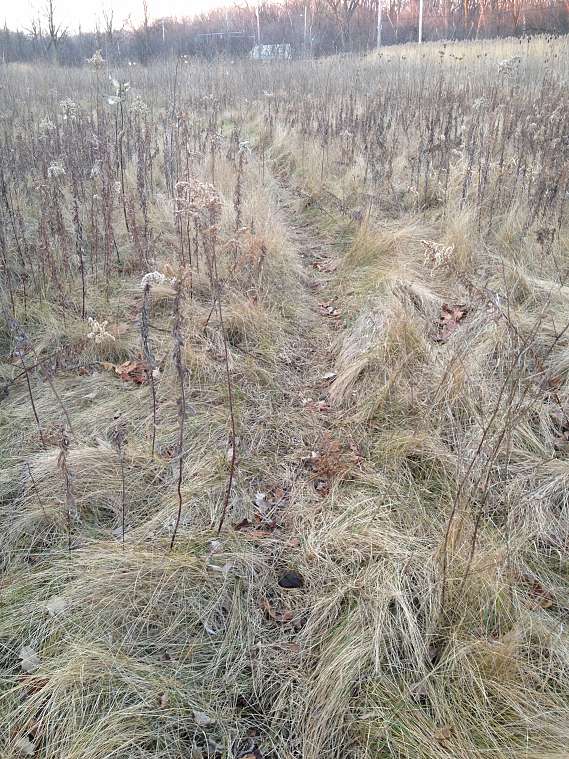 This field is perhaps twenty-five acres or so, jammed between two busy roads that meet to form the apex of a triangle. Theoretically the land should provide drainage into the Des Plaines, but the roadway on the east impedes this, as though the water were a living creature halted in its migration. Across the road and across the river is the site of an old Potawatomi encampment. On 19th century maps, this place shows up as part of the blank space between the careful grids of small towns. Was it prairie? Oak savanna? So much of learning an ecosystem requires imagining backwards, so much of restoration mandates thinking forwards. Just when was this wilderness? If you define wilderness as an unpeopled, unmanaged place left to its own devices, not in 7,000 years. It’s always been a pretty good place to live, but has also pretty much always been wild. At the turn of the twentieth century it was an agricultural area. At the turn of this century, when they were digging the deep tunnel, it became a repository for excavated limestone bedrock that grew into a high white hill, which, in the way of these things, took a lawsuit to get the parties responsible to remove.

Now coyotes, deer, skunks, mice, and birds frequent the field. In human terms, it’s a degraded area of low floristic quality, full of smooth brome and other introduced grasses, asters, Canada goldenrod, white poplars, scrubby willows, occasional switchgrass, unaccountable prairie coreopsis, milkweed, some brambles, a little teasel, and Phragmites in the low areas. The damp soil is probably still limey. Generally unpromising, it’s near the bottom of restoration priorities, the kind of place sometimes called wasted space, or a wasteland, outside the city walls, beyond the pale, to which one might be banished for transgressions against god or human to wander among the thistles and weeds, bereft of music and ritual, feasting and friends. Were it not public land, it’s a place certain people would immediately want to “develop.” With the heavy traffic fencing it off and planes overhead, it seems forgotten; never have I encountered another human being. These sometimes can be the best places—unmanaged, off-grid, not under surveillance, so to speak. Anything could happen: plants grow, wild animals make homes, old-field successional ecology manifest. 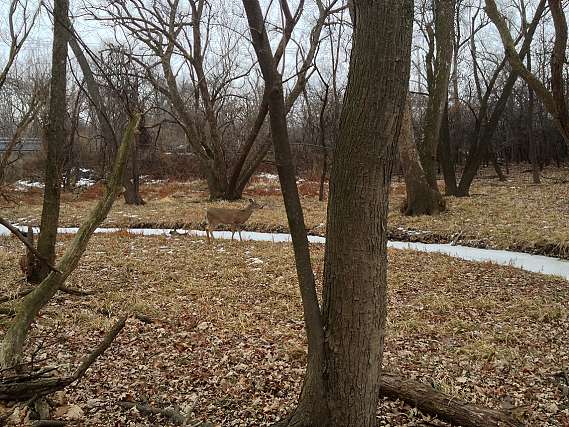 After too many hours in my windowless office, I’ll often walk here to watch seasonal changes, follow the deer trails, smell where foxes or skunks have been, relish the sheer size of the unbuildinged, open space. Somehow it reminds me of the vacant lots—sometimes nearly whole blocks—of my childhood, full of debris and what we children called tumbleweeds, where we used the scattered bricks, old boards, bottles, and broken crockery to build “houses” and play at living in our own society full of elaborate stories, folkways, and rituals, play at living like the Indians we learned about on visits to the Field Museum. This acreage is a neighborhood in flux—full of oldtimers, new immigrants, a few glamorous and a few dodgy inhabitants—everything precarious because of large forces such as land use planning, and still larger ones such as climate change. 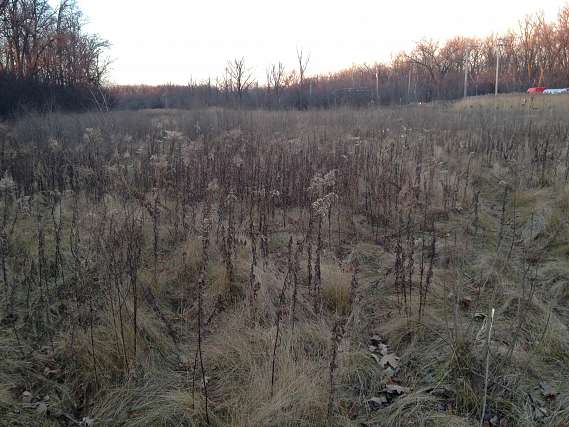 While sowing, I think of the old much-quoted Wendell Berry poem about sowing clover in a time of war. We live in a time of cascading distresses. I think a silent prayer: Oh lord, let us live lightly on the earth, oh great creator help us learn to live lightly on this earth, oh let us learn to live in keeping with its laws, to not overstep our bounds. To my people, the Quakers, every place is sacred. What should this mean in practice? If every place is sacred, aren’t all creatures, also plants, rocks, river, and air, also sacred? Is the self-regulating, complex biosphere with all its emergent properties not sacred? Shouldn’t this call for an ethic of restraint? An ethic of care? Doesn’t it call for a reversal of paradigms, a redrawing of cultural and actual maps? What if we thought of the proper role of human habitations as being islands among a conservation landscape, instead of the opposite?

Sowing seeds is an act of faith, wild seeds especially so. There’s no shelter, greenhouse, seed-starting mix, containers specially designed for deep-rooted plants, or controlled watering. Selection is random, germination chancy. Very few will thrive–mice and birds will eat some, some won’t germinate, and when and if they do, deer will graze upon their tender green youth. It is a direct expression of faith, as it always has been, of acknowledgement and trust that natural processes will carry on, that cold weather, rain and snow will prepare them, that they will germinate and thrive, bloom and set seed, adding their new life to the ancient cycles. Oh let these seeds grow and add to the biodiversity of this place as it becomes something new. Oh let them take hold so that summer after next I will walk among their blooms, insects partake of their pollen and nectar, birds eat their seeds.

This neglected field, including all its nonhuman inhabitants, has its own emergent properties. It is always in the process of becoming. As I empty the bag, the clouds lower until all the air takes on their gray dampness. The wind picks up and frozen bits of not-quite-rain begin to ride on the surging currents. Later on it will snow. I walk around brushing asters and goldenrods so their remaining seeds lift in the wind, then walk from milkweed to milkweed, each plant’s dried pods already opened, thousands of clustered dark seeds with their gleaming floss ready to fly, each one a prayer. For a while, I pull out handsfull, fling them aloft, watching as some waft away in the open and some catch on plant stems and on willows and poplars. Oh help us choose the path of regeneration, the path of helping other species, the path of learning to live in reciprocity: the path that will lead us home. 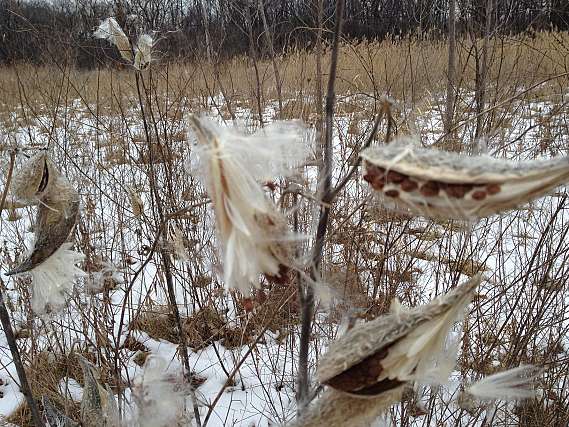