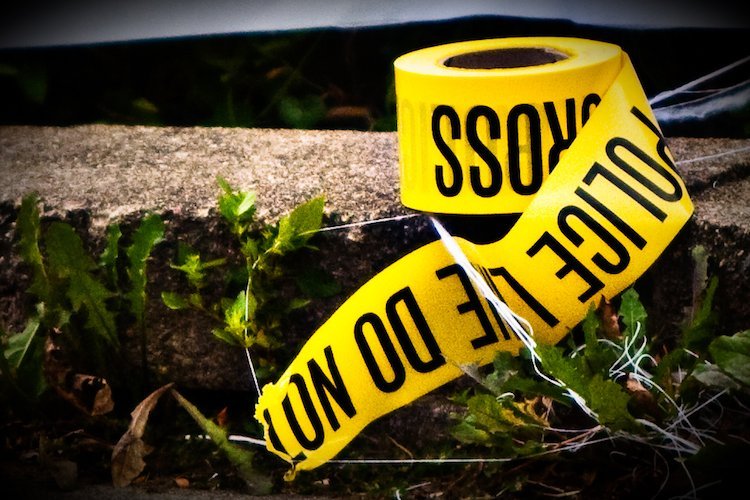 While scrolling through my Facebook feed one day this summer, I came across a post so disturbing it stopped me in my tracks. As in, my thumb froze, immobile, above my phone screen. Being temporarily stunned by a shocking Facebook post is nothing new to me. But this was different. The post was about a horrific act of violence perpetrated against . . . a row of street trees.

The post reported that in the middle of the night, someone had girdled—sliced around the circumferences of—thirty-two Japanese cherry trees. A community tree-planting organization had recently installed the trees along a median in my town as part of an effort to increase tree canopy. The vandal drilled holes into the trunks of the young trees and injected them with poison.

If ever a situation called for the rhetorical “Who DOES that?” it was this.

Harming a tree is like kicking a puppy. Cutting into a tree and injecting it with lethal poison? That is the stuff of a deranged, evil villain in an animated Disney movie. I realize not everyone loves trees, but, at worst, people are merely indifferent to them. Right? Who could feel such hatred toward a tree that they would take such calculated steps to violently assault it? And why?

My mind shifted from incredulity about the act to the stupidity of it. Hadn’t anyone read Shel Silverstein’s The Giving Tree to this criminal when he or she was a child? Wasn’t the offender aware that trees improve our health and wellbeing in so many ways?

Trees in towns like mine reduce urban heat island effect, help filter polluted stormwater, and provide habitat for many forms of wildlife that play important roles in the food chain OF WHICH WE ARE AT THE END. Even the non-nature lover can appreciate the financial benefits of urban street trees. Research has shown that they improve our property values, draw more people to local businesses, help our roads last longer, and reduce our home energy costs. Ironically (though not surprisingly), studies suggest that tree cover may even help decrease violence.

Later that day, the tree-planting non-profit posted an update on their Facebook page. The perpetrator had yet to be identified, and the trees were in serious trouble. As this was not an animated Disney film, there was no magical antidote to the villain’s poison. Keeping the trees well-watered during the hot Maryland summer was the only thing that could be done to increase their chances of survival.

Like an episode of The Andy Griffith show come to life, the local fire department helped with an initial dousing, but the young, injured trees would require longer term care. The organization quickly raised enough funds to purchase and install water bags, but they needed help keeping them full. On their next Facebook post, they invited families to “adopt” a tree and care for it by keeping its water bag full through the summer.

My daughter and I sprang into action. With the enthusiasm and cluelessness of a family about to adopt its first pet, we made preparations. My daughter filled two of our largest insulated sports jugs with water. We made signs. Mine was a boring, nerdy sign about the multiple benefits of tree canopy. My daughter’s, which was written in fat, green magic marker, consisted of a simple, earnest message:

“We care for our trees because we (heart) our community.” 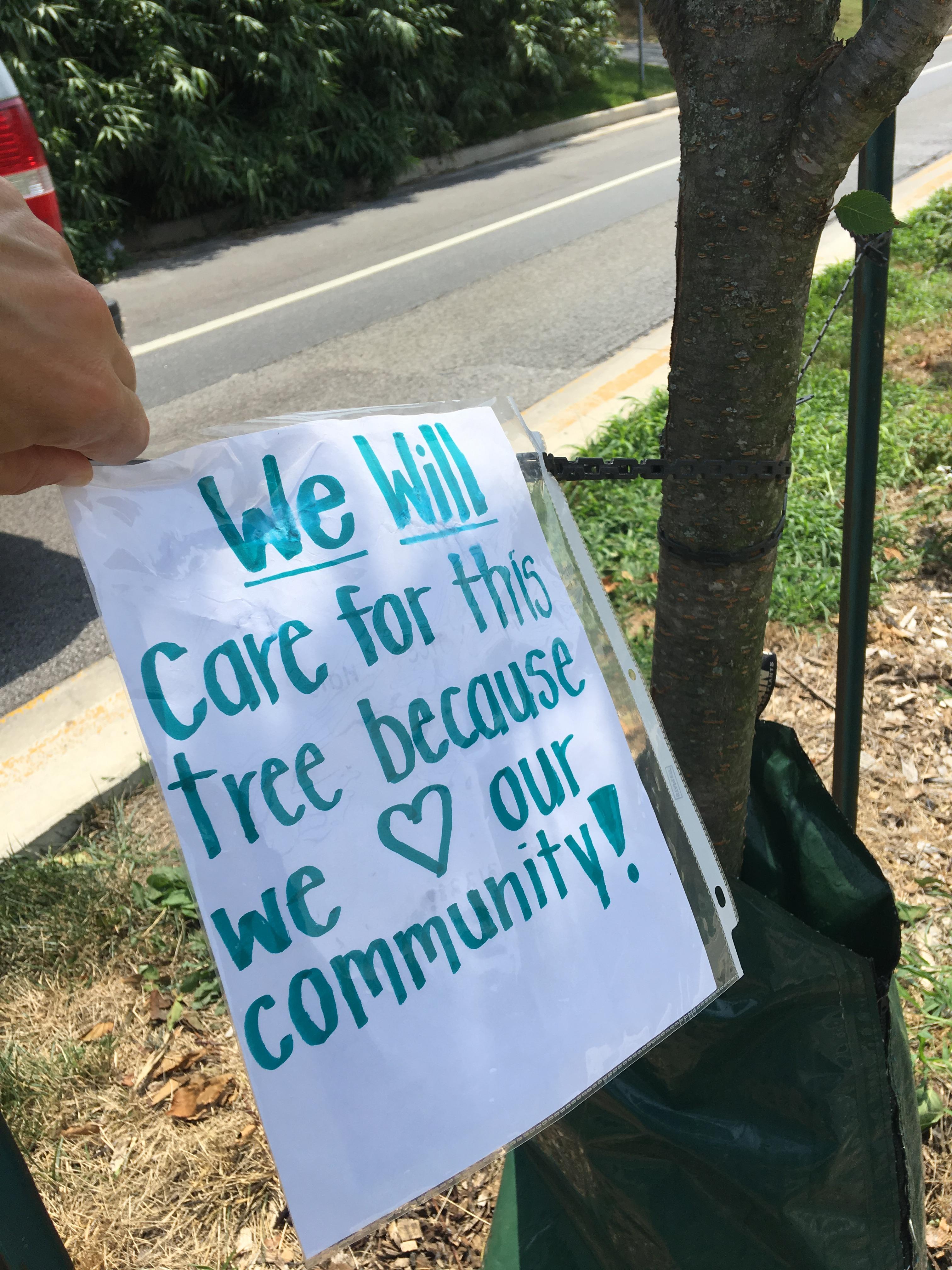 We rushed to the crime scene, parked along the side of the road, grabbed the signs and jugs, and walked down a portion of the median. We admired and pitied the trees as we searched for one to adopt.

“Mom, this one looks healthier than the others.”

We were encouraged to see that several of the trees had already been adopted, their water bags near bursting and their branches adorned with hand-made signs.

We stopped at a tree toward the end of the median. It hadn’t lost too many leaves, and my daughter thought it looked “cute . . . and hopeful.” I had to agree. We tied our signs to the tree and gave it a gentle hug. Oddly, the water bag did not seem to get any fuller as we emptied the contents of our first jug. Upon closer inspection, we realized that we had not poured the water into the bag, but instead through the middle of it, directly onto the trunk of our tree. Talk about adding insult to injury. After discovering that the bag, which was shaped like an upside-down ice cream cone, encircled the tree and contained an opening flap, we successfully poured the second jug into the bag . . . and realized that we needed about eight more jugs to fill it. It turns out a tree requires more water than, say, two kids during a lacrosse game. After four more shuttles from the house to the median, the water bag was full. 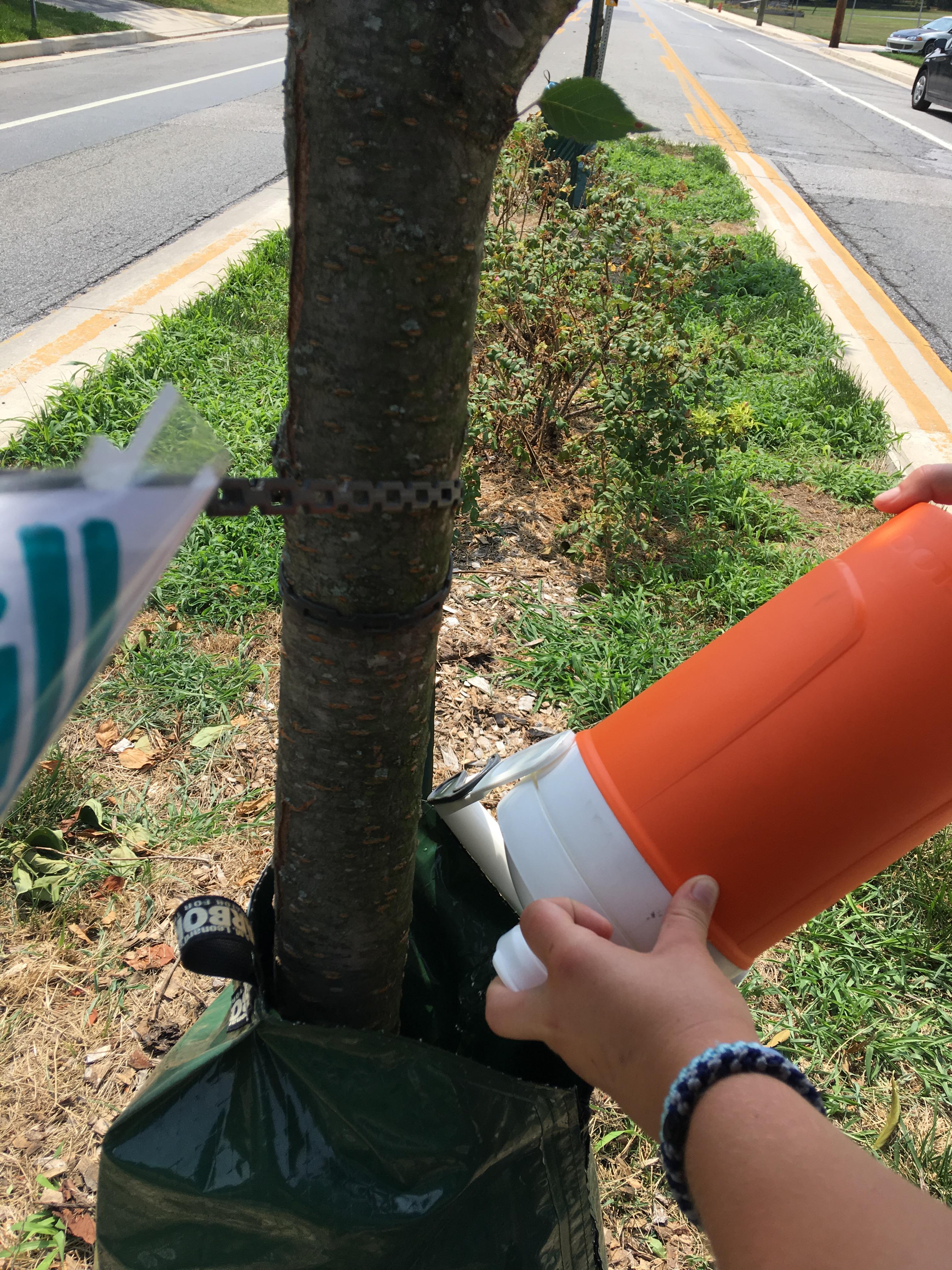 By the end of the week, all of the water bags enveloping the trees along the median strip were full. As was the tree-planting organization’s Facebook feed. Photos of our signs were among the first items posted. (My daughter’s garnered six likes and a heart emoji. Mine got nothing.) Offers of help and expressions of support flooded into the comment section. Soon, photos of T-shirts being sold by local businesses to help raise funds for the tree-planting organization began to appear on the feed. There was a palpable momentum to the street tree rescue.

Throughout the summer, my daughter and I repeated our tree-watering process (minus the erroneous pour and with larger vessels). After a few weeks, the signs faded. Eventually, they disappeared. But the tree stayed alive. By late August, it looked like our little tree was going to make it!

Sadly, the same could not be said for most of the assaulted trees. By fall, the organization determined that most of the thirty-two trees were dead or dying and needed to be replaced. And then something extraordinary happened. In early November, they held a volunteer day to replace the trees. Hundreds of community members showed up, shovels in hand, to help with the planting. Along with an army of volunteers, grant funding from the local utility and donations from local businesses guaranteed that all of the dead and dying trees would be replaced.

In my daily comings and goings, I frequently drive past that tree-filled median. Before the trees were harmed last summer, I never really noticed them, let alone thought about who cared for them. Now, when I pass that median, I look at “our tree.” I think about the love, effort, and water that went into keeping it alive. With a sense of pride and maternal concern, I gauge its growth. Earlier this winter, I noticed it held a birds’ nest. I took that as an encouraging sign. I’m rooting for that tree, and for all of the trees on that median. I feel a sense of connection and responsibility to them all. This, I think, is stewardship. 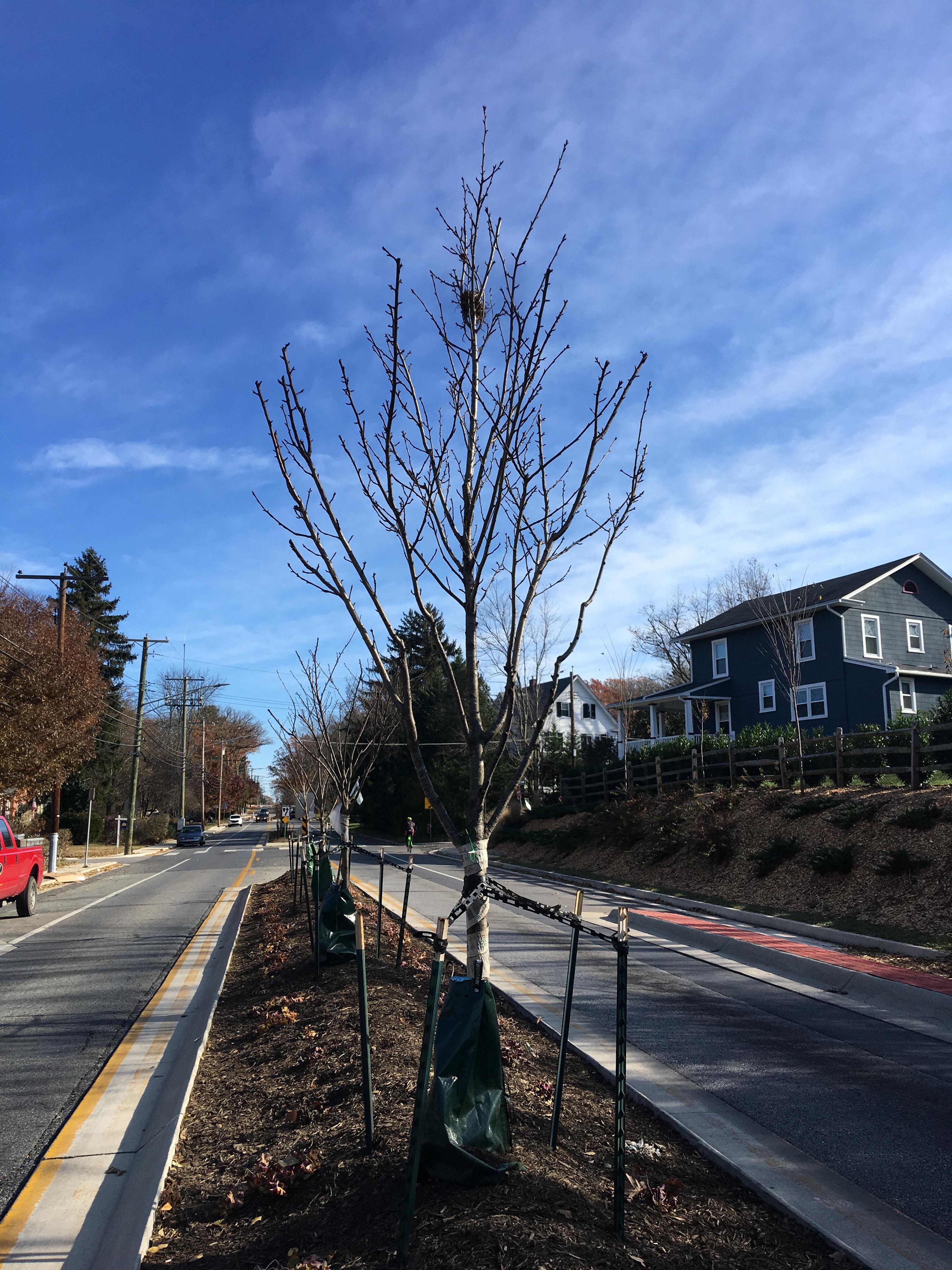 But must stewardship come at such a cost? Does a tree need to be harmed for us to care about it? Do we have to adopt a tree to feel a sense of responsibility towards it?

While tree vandalism is enough of a thing to warrant an article on the Arbor Day Foundation website, it is likely not common enough to spark widespread tree hugging. (Nor do we want to rely on vandalism for a reason to hug trees!)

What can motivate people to care about street trees? A few years ago, I interviewed three psychologists about the role of psychology in ecological restoration and conservation. When discussing ways to positively influence attitudes and behaviors related to the environment, they all spoke of the power of social norms and appealing to intrinsic, self-transcendent values (such as community, broadmindedness, and love) rather than extrinsic goals (think power, glory, and status). They also recommended focusing less on what we humans have done wrong and more on the possibilities of what can happen when we join together and do things right.

Perhaps I ought to ask my daughter to make more signs.

We never did find out who was responsible for the poisoning. What we did discover was a stronger sense of community, one that included trees and helped us recognize the beauty of reciprocity on a suburban median.