A Tale of Two Countries and Two Species: The Hedgehog and the Opossum 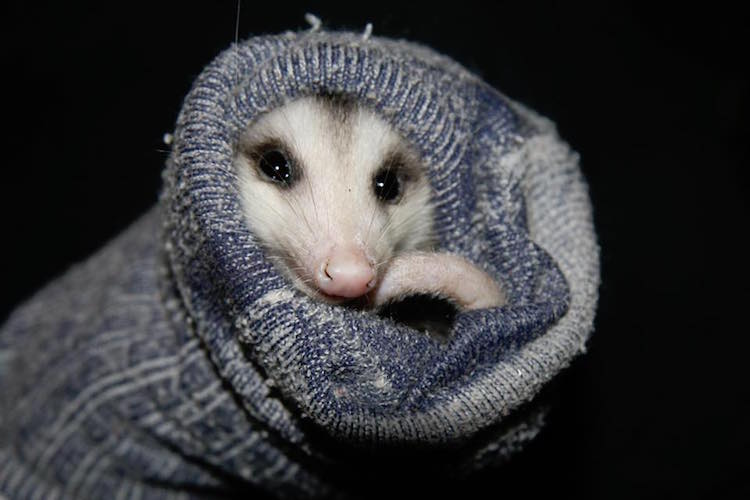 Britain’s favorite animal is not the cunning fox or the curmudgeonly badger but the prickly hedgehog. The little worm gobbler was crowned Britain’s best-loved national species in a BBC public poll in 2013. On the heels of the poll came a proposal to elevate the hedgehog to the status of a national symbol, a petition demanding stronger legal protections for the hedgehog, and the creation of the UK’s first-ever hedgehog sanctuary.

Why so much hullabaloo over the hedgehog? 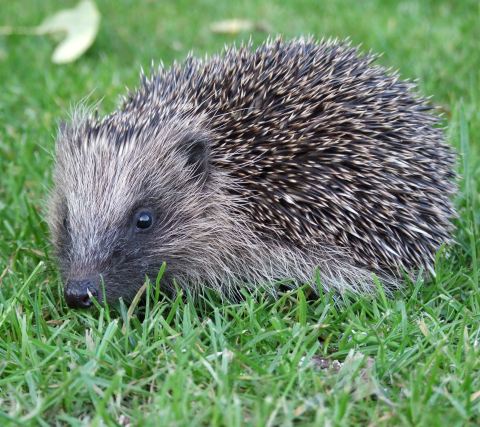 Because despite England’s love for its iconic animal, hedgehog numbers have plunged drastically, from a high of 35 million in the 1950s to under 1 million today. The once common garden visitor has become so rare that one in five Brits who participated in a backyard wildlife survey last spring said they had never seen a hedgehog in their garden.

I have never seen a hedgehog either, so on a recent trip to London, I was keen to meet one of the spiky creatures whose soulful countenance is familiar to anyone who has read Beatrix Potter (Mrs. Tiggywinkle is the stout hedgehog who lives in a cottage and takes in washing for the other animals). I emailed Fay Vass of the British Hedgehog Preservation Society to ask if she could facilitate a meeting with a representative hedgehog. Vass wrote back straightaway: “Meeting a hedgehog in London is not so easy I’m afraid! The only way to be sure would be to visit a rehabilitation centre and see a patient, but they aren’t close to central London.” 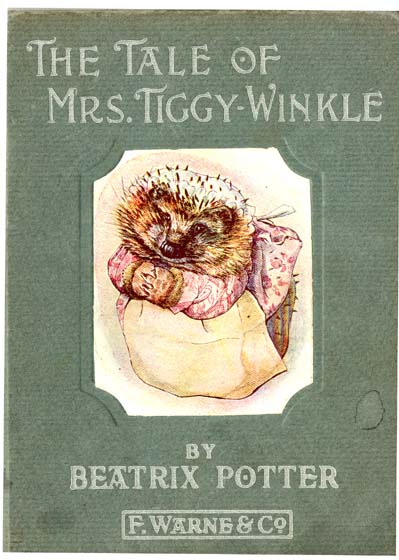 Unfortunately, Central London was exactly where I was headquartered. So I skulked around the Natural History Museum’s wildlife garden, an urban oasis that serves as a refuge to many species of mammals and birds in South Kensington. “Do you have any hedgehogs here?” I asked the curator. He told me that though a family of foxes had been homesteading in the garden, he had seen no hedgehogs. He suggested I try Regents Park, the only royal park that still hosts a tiny remnant population.

Hedgehogs spend their days snoozing and emerge near dusk to search for meals of earthworms, slugs, beetles, and snails. So I set out on my quest in late afternoon. It is thought that the elusive hedgehogs at Regents Park have survived because they have learned to avoid crossing busy roads. (The slow-moving hedgehog is a common roadkill victim; tens of thousands lose their lives to vehicles every year.) On my way to Regents, I stopped at a shop and bought a copy of the magazine The Lady, whose cover was emblazoned with a hedgehog and the headline “Help our hedgehogs—before it’s too late.” Dusk lengthened into night as The Lady and I prowled Regents Park. While I didn’t see a single hedgehog spine, I did read the magazine cover to cover, learning a lot about the UK’s movement to save the hedgehog, whose success can be measured not (yet) by rising numbers of hedgehogs but by the numbers of Britons who have stepped up to do their bit.

The group Hedgehog Street, a joint campaign of the British Hedgehog Preservation Society and People’s Trust for Endangered Species, has 30,00 volunteers, or Hedgehog Champions, who are dedicated to making Britain’s gardens more hospitable to hedgehogs. The lumpen little animals do not climb nor do they tunnel, so they are flummoxed by the fences and walls that enclose proper English gardens. Hemmed in by impassable barriers, they are unable to forage for adequate food or find mates. One of the actions recommended for assisting them is literally quite small: cut a hole in your garden fence the size of a CD so hedgehogs can travel from garden to garden.

I could hardly bring myself to read the long list of things that pose a mortal hazard to this near-defenseless animal: elastic bands, strimmers (weed-whackers), dogs, pesticides, swimming pools, automobiles, slug pellets, garden netting, and bonfires (many people burn garden debris in early autumn, just the time of year hedgehogs are burrowing into brush piles and getting ready to hibernate). It almost seems a miracle that there are any hedgehogs left in the UK at all.

But the hedgehogs’ protectors have wisely made their campaign entertaining and fun, and they have made brilliant use of social media. As the British naturalist Alan Titchmarsh says, “Conservation is not a gloomy, pessimistic pursuit. To be effective, it needs to be joyous and celebratory.”

So Hedgehog Street has an online map where people can pin locations of hedgehog sightings. One can post videos of hedgehogs on a Hedgehog YouTube channel. There are designs for hedgehog homes and advice on what to feed them—no to milk and bread; yes to meaty cat food, unsalted peanuts, and special hedgehog food. (Unlike in the States, where feeding wildlife is discouraged or even illegal, conservationists in England endorse supplemental feeding of wild hedgehogs.) And the first week in May has been dubbed Hedgehog Awareness Week, a celebration with a full slate of hedgehoggy events. 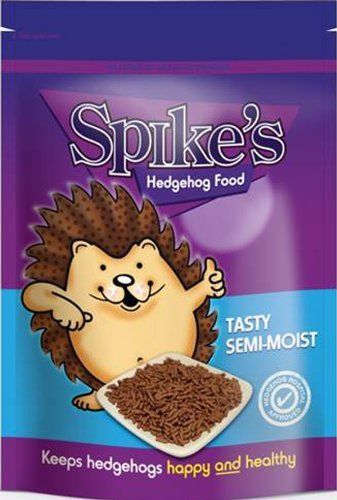 I was thrilled to learn about all the heartfelt and capable efforts on behalf of this gentle, appealing, beneficial garden animal. Yet the more I learned, the more I began to be aware of a simmering disquiet, which I eventually identified as … envy.

Yes, I was envious. Because we Yanks also have a gentle, appealing, beneficial garden animal. It’s called the Virginia opossum and is generally treated as a pest in the United States.

The opossum is the closest American analogue to the hedgehog. Though the two animals are not at all related, they share many similar characteristics, chief among them their uniqueness. The hedgehog is the UK’s only spiny mammal; the opossum is North America’s only marsupial. 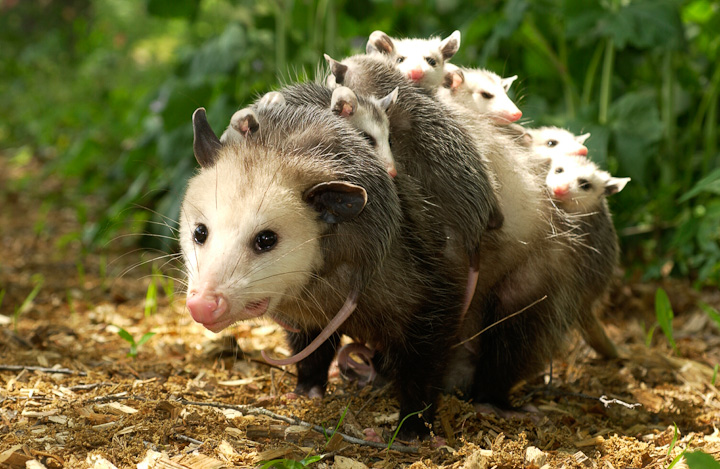 Like the hedgehog, the opossum is docile and shy. While an opossum may hiss threateningly when cornered and flash 50 or so pointy teeth, it’s all for show; they rarely bite. Both favor a non-confrontational defense method—hogs roll up into a tight, spiky ball when threatened, while opossums play dead—and both are completely helpless if their defense tactics fail.

Like the hedgehog, the opossum is enormously valuable to gardeners, hoovering up pests such as snails, slugs, cockroaches, centipedes, and even mice and rats. A single adult opossum also can eat up to 5,000 ticks a summer, which in this era of Lyme disease paranoia should make everyone want to run right out and entice an opossum into their garden.

Opossums don’t tunnel or destroy plants like moles and gophers; don’t release noxious fumes when cornered (skunks); don’t menace small children or pets (raccoons); and don’t snack on lovingly tended vegetable plots (rabbits). And because of their low body temperature, opossums rarely carry the rabies virus. They are fascinating creatures with opposable thumbs on their rear feet, prehensile tails like monkeys, and pouches like kangaroos—baby opossums are even called joeys and are arguably as cute as baby hoglets. 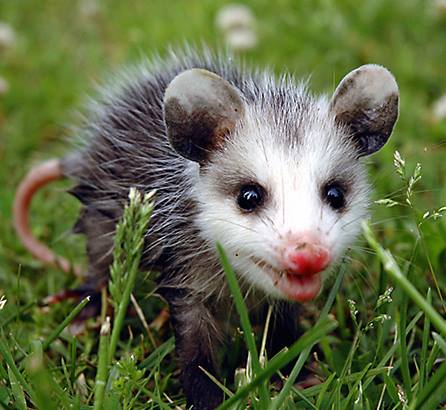 So where’s the love for the opossum? Where are the plans for opossum houses, the recipes for opossum snacks, the knitted opossum earmuffs (their naked ears are prone to frostbite)?

Of course, our opossum is not endangered and the hedgehog is. Opossum numbers are actually growing and their range expanding. Yet if opossum populations were threatened, I have trouble picturing the American public rallying to save this much-maligned animal. Indeed, despite an appetite for garden enemies like slugs and snails, the opossum often appears on the hit list of species that are most reported to pest companies for removal. The objections seem to come down to a single trait, one the opossum cannot help: a resemblance to rats.

Lila Talcott Travis—the founder of Ygdrassil Urban Wildlife Rescue in the San Franscisco Bay Area— told me, “Opossums get grouped together with rats because of their naked tails, black eyes, and sharp teeth. I think humans have an instinctual aversion to rats because rats and mice have long been associated with dirt, disease, and death.”

Rebecca Dmytryk, co-owner of Humane Wildlife Control, a non-lethal wildlife management company, agrees. She told me she gets calls about twice a week from homeowners who want opossums removed from their property. “People seem more afraid of them than skunks or raccoons, because people think they are rodents,” she told me.

She says opossums have a way of staring that people find unnerving. Dmytryk explains this is simply because the animals are nearsighted and will stare in the direction of any noise. “People think they’re going to be stared down and attacked,” she said, adding, “Opossums are totally misunderstood.”

While Dmytryk does her best to educate her clients, telling them opossums are harmless and even beneficial, it rarely seems to make a difference. “People just want them gone,” she says.

An accidental resemblance to a rodent isn’t the only card stacked against the opossum. The reasons the public finds one animal repugnant and another charming may seem arbitrary, but these preferences are often rooted in our subconscious and our own animal natures. Most humans prefer their animals cute, cuddly, and nonthreatening. The triangular structure of the opossum’s face is slightly reptilian, almost serpent-like, and that, along with a naked tail and pink claws, seems to awaken some primal fear in our not so deeply buried primate natures. One friend of mine even confessed that opossums reminded her of evil aliens and compared their appearance to Lord Voldemort—Harry Potter’s archenemy. 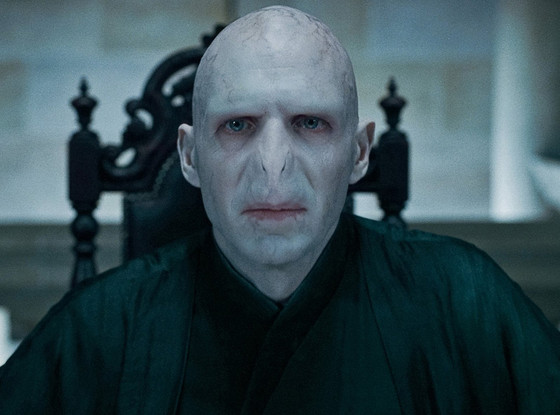 The rotund hedgehog also looks like an alien—the adorable (though frighteningly invasive) alien species called tribbles, from the television series Star Trek. And who doesn’t love a tribble? 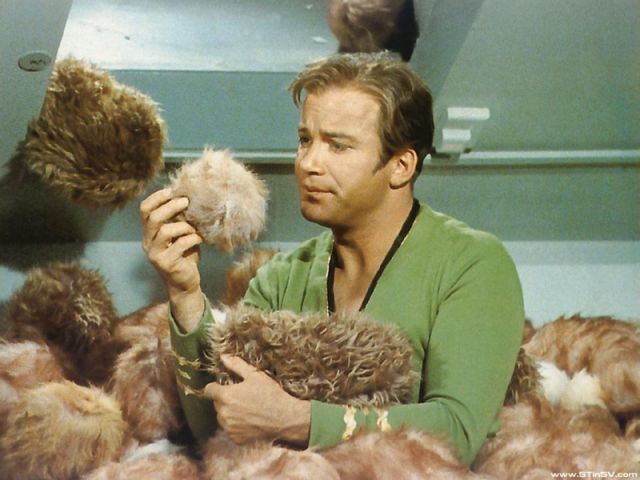 Hugh Warwick, a hedgehog expert and the author of A Prickly Affair: The Charm of the Hedgehog, says one reason people are drawn to the hedgehog is because it is unusually tolerant of human proximity, almost like a wild pet. He asserts, “More than any other wild animal on the planet, the hedgehog lends itself to being cared for by people.” Small and mild-mannered, hedgehogs provide that safe bridge to the wild we long for; even their spiny armature adds to their appeal. “The word that best seems to sum up its character,” one British reporter wrote, “is ‘friendly.’” 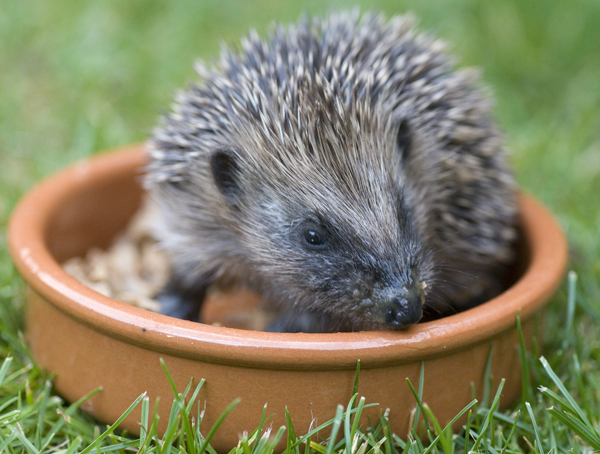 With mounting public adoration and a well-orchestrated national conservation effort, I’m optimistic Britain’s hedgehogs will survive. I’m less sanguine about our opossum. Oh, I know the species will endure—this ancient mammal has been around since the time of the dinosaur, 70 million years or so, and is remarkably adaptable. But as long as superficial aesthetics trumps a broader appreciation and wonder for this unique mammal, the opossum will always be persecuted; its homely appearance guarantees that North America’s only marsupial will never achieve the iconic status the roly-poly hedgehog enjoys.

I went back to Rebecca Dmytryk for one last-ditch try.

“Is there anything we can do for the opossum? Spread some kind of positive PR?” I asked.

She hesitated. I could almost hear her shaking her head over the phone.