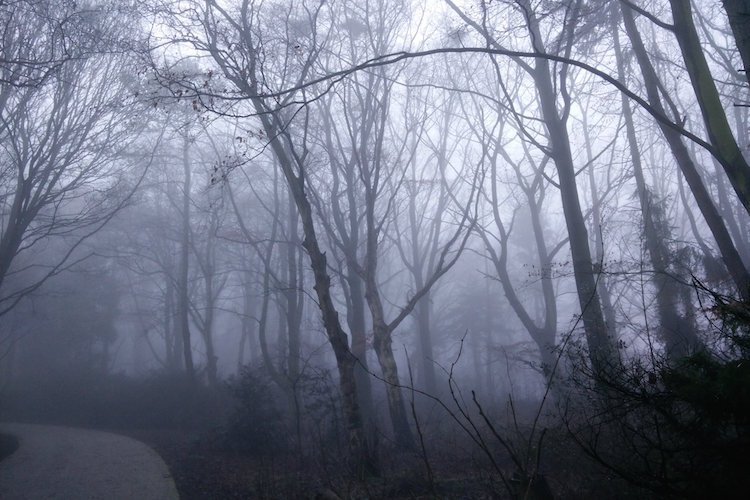 This weekend my boyfriend and I went on a walk, as we have done so many times before, time enough to have lost count, if we ever started counting at all. Sometimes these walks take us into the city to explore its streets and shops and hidden spaces, but today I feel the pull of something self-willed turn my head, so we walk down to the park instead. Just as the city reveals something new on every visit, so the park offers up gifts too: a new plant, a new bird, or a familiar view seen under different weather. It offers up something else too, something it took me a while to put my finger on and longer still to name—it offers up the wild.

It is not a beautiful day. Warmer than it has been lately and most of the ice is gone, but it is still not warm, especially in the wind. Overhead, the sky runs clear and cloudy in turns, unsure what to settle on. 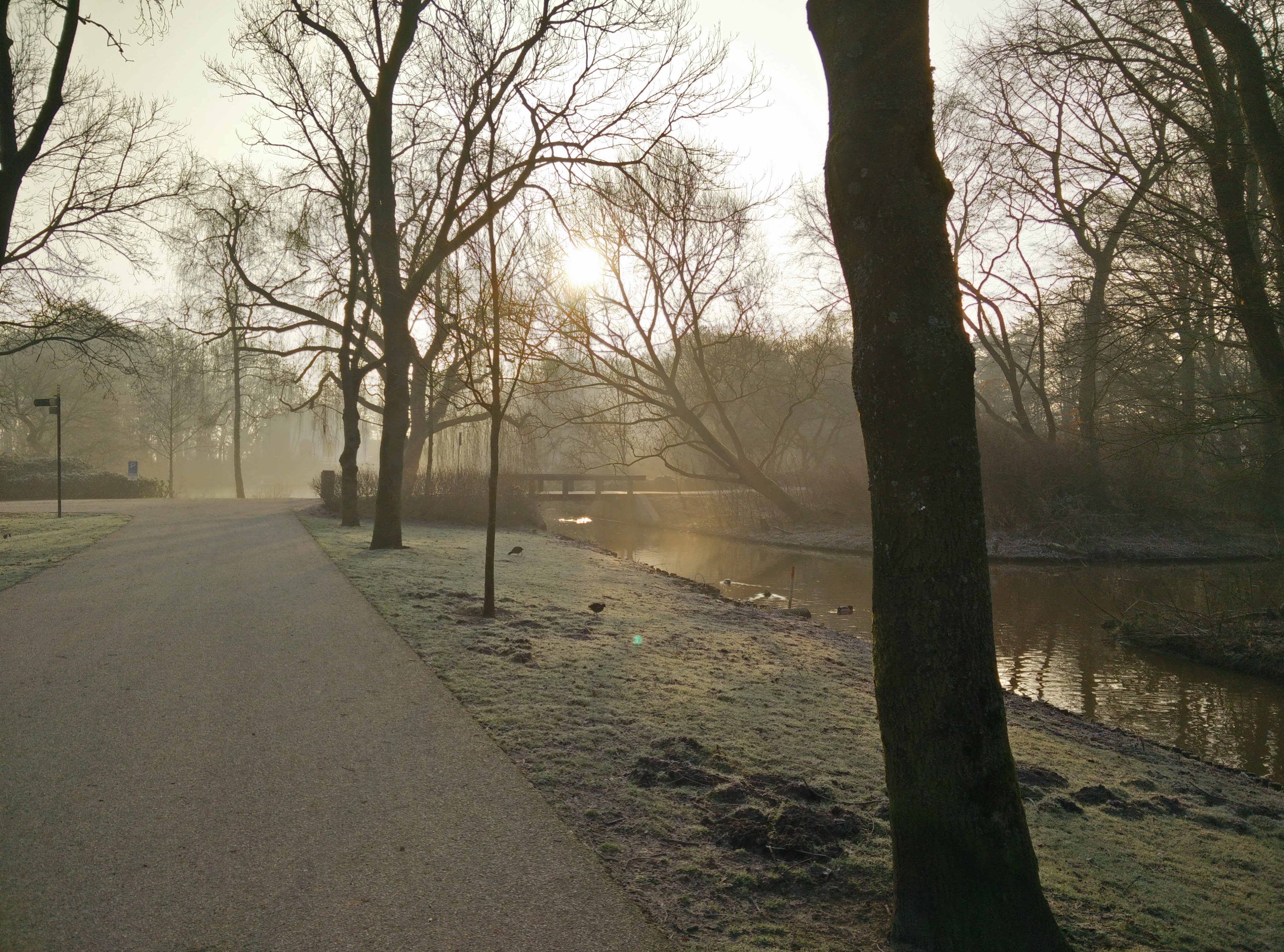 We pass under the tram tracks and approach the park gates. The stout stone gateposts declare “ANNO 1770.” They once belonged to the Muiderpoort, an old entrance to the city, and were relocated here many years later. There are no walls or railings around the park, and the gateposts stand alone, gathering moss. Out of time and out of place, they are the perfect portal to this small patch of green, surrounded by concrete and bricks.

We pass through the gateposts and watch a heron land on a branch with a twig in its mouth. The herons nest over there, I say, and the heron flies off in the direction I’m pointing. We take a left and head down a wood chip path between two drainage ditches. Beyond the drainage channel to our right is the playground. It is empty today but in summer that sandpit and those swings will be teeming with children and parents. I think of those children, the ones who walk here from the apartments in the neighbourhood, and how they must love this place, how they are already collecting future nostalgia. Beyond the drainage channel to our left is a place I call the meadow, though the only thing that grows there is tall yellow grass that reaches for the sky. The grass has overstretched in certain patches and lies wind-drunk and bowed. Beyond the meadow, apartment buildings rise high into the sky too. I have seen hawks here, circling in the air, but there are no hawks today.

We pass the fallen tree. The one that has lifted up the soil like a yoghurt pot lid, revealing the bricks that make up the channel’s bank. The fallen tree always reminds me of how thin the veneer of land is in this country reclaimed from water, and how sometimes disrupting that thin veneer is all it takes to make a place wild and free again.

Leaving the wood chip path behind, we veer right by the outdoor swimming pool. It’s empty at this time of year and the turnstile gates stand stock still and cold. To our left there is a road bridge and the arches underneath are covered in graffiti that stands out bright and clear against the cold, grey air. My boyfriend stops to take a picture of a small pond; the surface is still covered in a film of ice. His photography forces us to slow down. He takes several shots, trying to capture something beyond what is really there in this very moment, whilst I wonder how the fish that live in the pond are doing below the ice.

A car pulls up under one of the bridge arches and a family with bundled-up children piles out, followed by their Irish wolf hound, a loping, scraggly haired dog that looks like it belongs by the fireplace in Wuthering Heights. We trail the family for a while and I wonder what it must be like to be someone who drives here from elsewhere. This park isn’t a place I visit. It is a place I come to out of necessity, like a garden that needs watering. 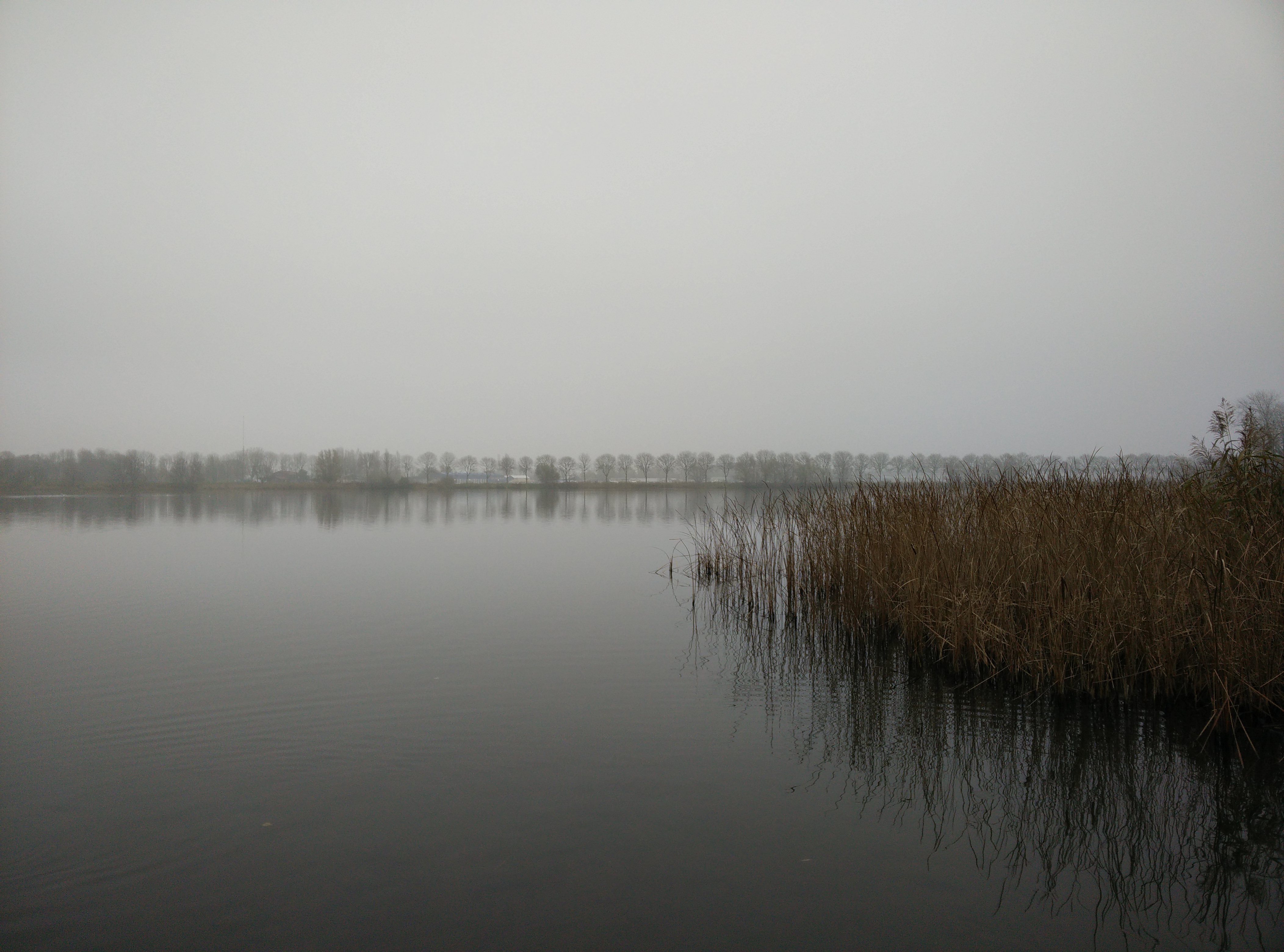 We cut back on ourselves along the edge of the Nieuwe Diep, where coots fight in the water and a seagull bothers them. The Nieuwe Diep is an expanse of water almost as large as the park itself, inhabited by coots, tufted ducks, seagulls, cormorants, geese and the occasional grebe. There are no mallards here. They stick to the channels of water near the park entrance, to fight over bread from pudgy toddler hands.

The path turns foot-churned and muddy and we look back across the Diep. The sun is out again and lighting up the road bridge. My boyfriend reaches for his camera, but he’s too late. The sun has gone behind a cloud again. Out on the wooden posts that rise from the water, seagulls perch and cry.

We leave the Diep behind and take to the path that circumnavigates the park’s wide expanses of playing field, where people throw balls for dogs and where, in the summer, they will string out bunting and have barbecues and picnics. The path passes under the heronry—where the herons nest and will, I hope, raise their young. The herons live a wind-buffeted life there, and they let you know, with their eerie human screams.

My boyfriend takes pictures of moss-covered logs and we notice the snowdrops, making their decided way up through the forest floor. It is not a true forest, just a strip of trees that lines the perimeter of the park, but it is every bit a forest to me. The floor is full of leaf litter, rummaging blackbirds, and fallen trees, where unseen insects lead busy lives. When it rains, the forest smells earthy and good. 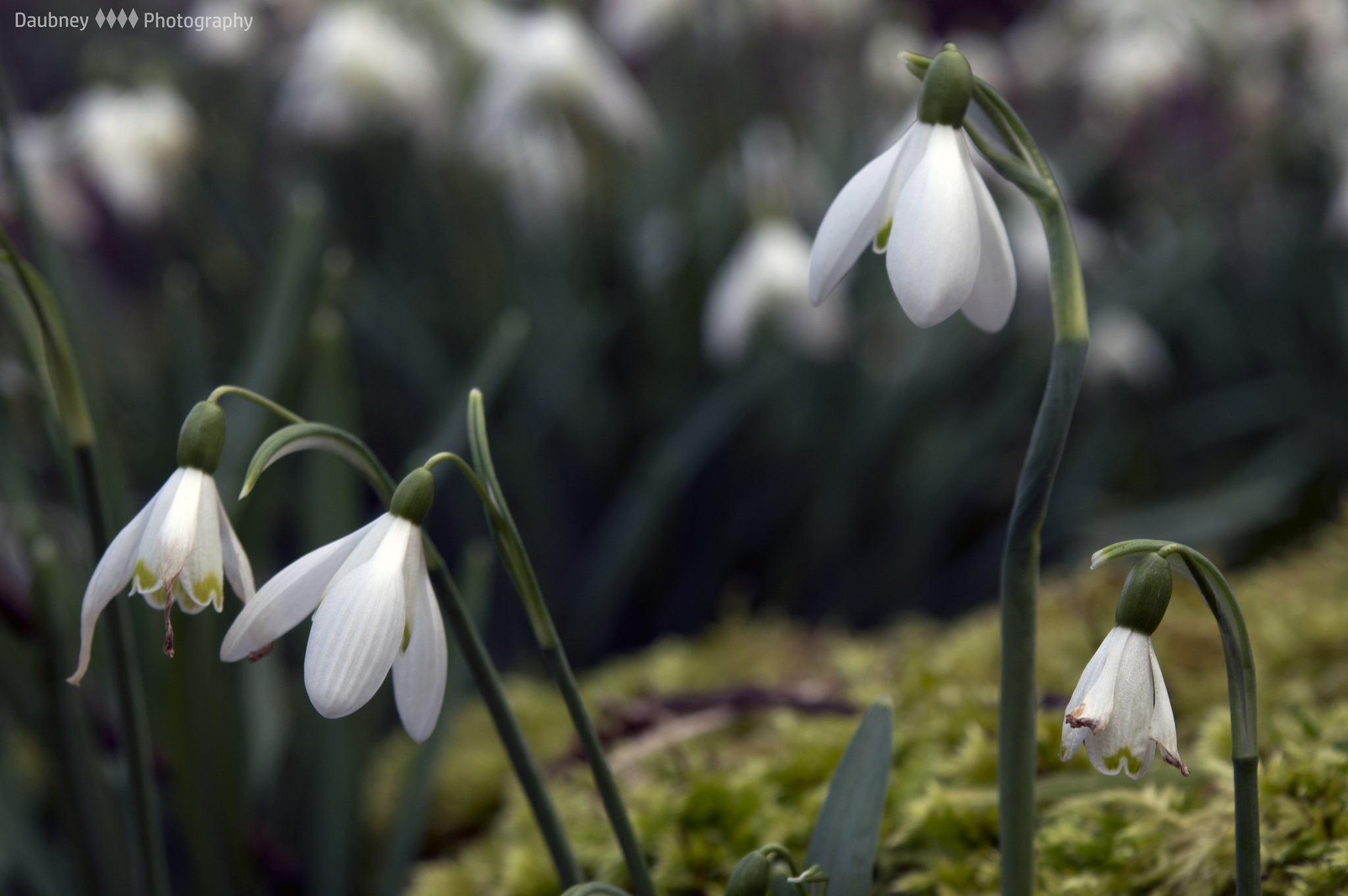 We venture deeper into the trees to investigate the little yellow flowers growing there. Later on, at home, I search online and discover that they are winter aconite. The name makes me think of acolytes, which seems appropriate for these little winter worshippers, blooming whilst everyone else is waiting for warmer weather.

Back on the path, we keep going, passing more families, more cyclists and dogs. The park is a lot busier than it was when I walked through it last week at dusk. It was five o’clock and though the days are getting longer, it was still darker than I would have liked. The park was quiet and empty and I quickened my pace, wanting to get out again. Until I saw something that slowed me in my tracks: crows and jackdaws roosting. The trees above the path were already dotted with corvids, but many were still gathered in the field below. Every now and then one would fly up, find a spot in a tree, and then fly back down again, like a little child that doesn’t want to go to bed. All the while they croaked and cawed into the approaching night. I know where the crows roost, I told my boyfriend later that evening. I felt as though I had been let in on a secret, as though this new knowledge made me wise and crowish. 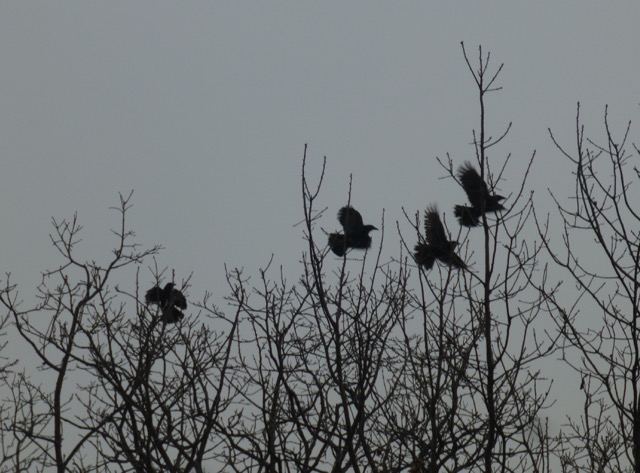 We see something in the undergrowth. We think it might be a mouse, until it flits up onto the branch of a shrub. Its tail sticks up in the air and we watch it for a while as it flits from shrub to shrub and then disappears. We decided, later on as we look through my copy of British Birds, that it must have been a wren. I add the bird to my mental taxonomy of the park, that list of things that makes it unique and beautiful to me. As J.A. Baker said, one part of England is superficially so much like another. The differences are subtle, coloured by love. There are probably other parks with wrens and hawks and winter aconite, and maybe after a year of walks I could love them just as much as this one. Maybe. Once a place works its way under your skin, it takes some doing to work it out again, wrens and hawks and all.

We decide to wind our way back through the wooded paths, following the drainage channel that mirrors the one we walked along earlier. The path splits and passes round and under a fallen tree. One path for the humans, one for small creatures. The tree is covered in curled shelves of fungi. Some are white and furry; some are shades of green and shiny. Just a few months ago, I was wearing shorts and climbing this fallen tree. I’m glad it has found other company for the winter.

On the other side of the drainage channel is the Jewish Cemetery. We walk down to the water and scare off a flock of pigeons that were hidden in the long grass. They take off with a gunshot of flapping wings. Take a picture. But he’s not quick enough, the camera doesn’t focus and they are a blur. After the pigeons’ ruffled departure, quiet returns and we look over at the gravestones of the cemetery, where hundreds of thousands of Jews were buried, though many were relocated when the land was sold to the city. The few gravestones remaining are mostly broken and falling over, or lost in the long grass. If the wild is something other than domestic, then this place—where the very thought of all those lives once lived makes it feel haunted—is decidedly wild. After all, if they live on at all, it must be a very different sort of living, far from hearth and home.

We trek through the forest undergrowth to return to the path and I remember the time we got muddy and lost in a New England forest. The thought wends its way to Thoreau and how he cautioned against vain dreams of distant wildness. We spot two ring-necked parakeets up in a tree, but they are gone before we reach them. Their shrill, indignant calls trail behind them. The parakeets seem to belong to a different colour and soundscape, but they have made their home here nonetheless, just like us. We have both given up on the sort of vain dreams Thoreau talks about, the parakeets and I. We have brought the wild home instead. I suspect it might be the only way to truly come home. 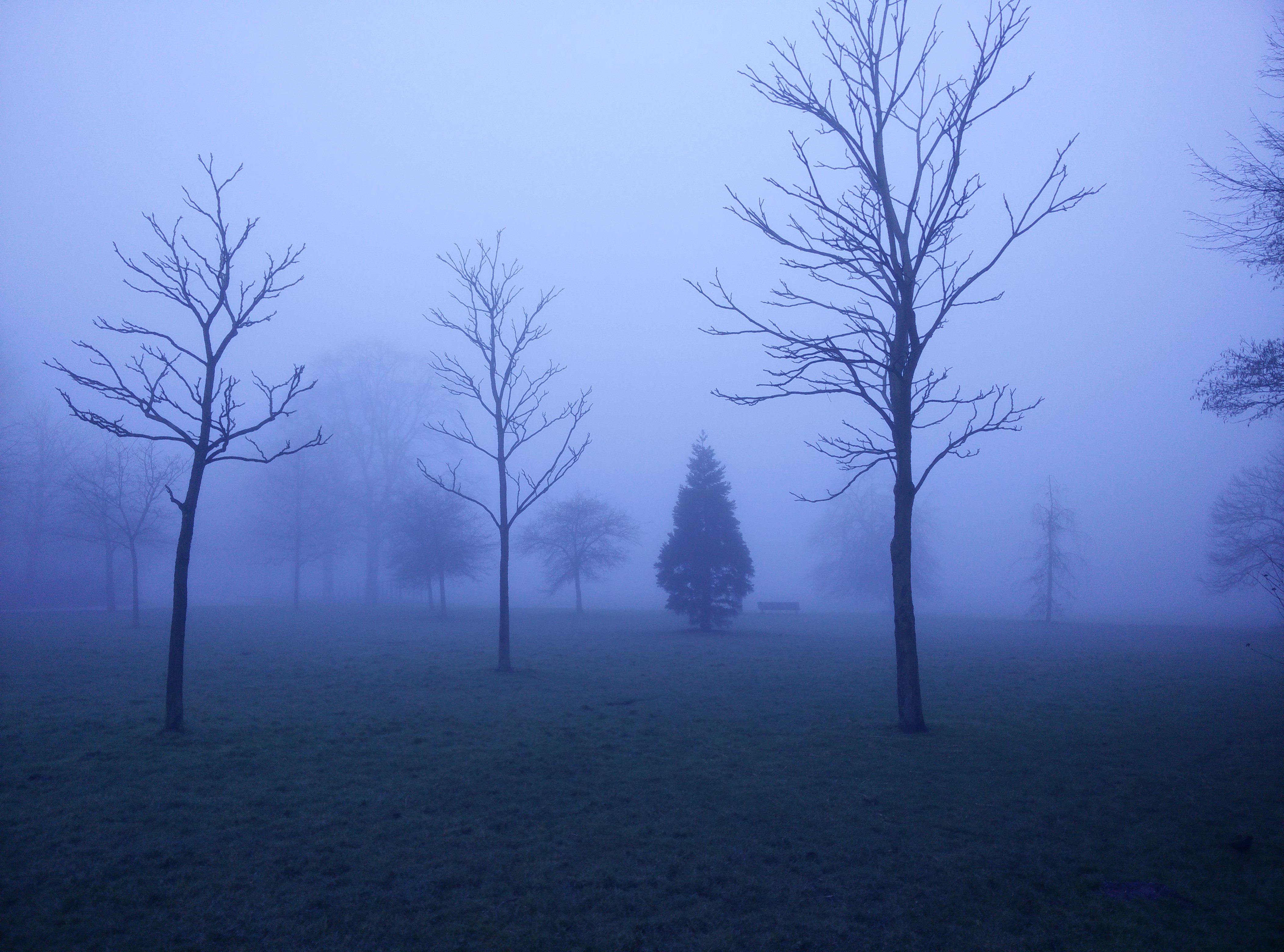 We reach the gates again and the walk is over. Yet, in other ways, it’s not. We trudge off to the supermarket for our Sunday food shopping and I carry the park with me for the rest of the day. I carry its wild places, its mosses and flowers and fungi. I carry the birds (or do they carry me, up out of myself and into a wide sky). And I carry its human histories too, its patchwork of gateposts and gravestones and all the life that passes through.