The city of Chicago has about four thousand miles of roadway. Let me put that in perspective. If you were to lay those roads out in a straight line, you could have a highway that runs from the Florida panhandle to parts of Alaska. Or, you could build a road that went back and forth between Chicago and New York City more than five times. It would be two-thirds the length of the Trans-Siberian Railway. In other words, it would be a road whose length would be overqualified even for a Jack Kerouac novel.

With all that road comes a sizable chunk of alleyway as well. Just shy of two thousand miles to be exact. If you laid that out, you would have a straight shot from Montreal to Miami, Winnipeg to Monterrey, or Paris to Istanbul. If you walked that distance for twenty-four hours a day, it would take about a month and a half to go the whole length. If you slept some, it would still take you more than three months. This is only the walking itself, which doesn’t include the time required to explore, to eat, to appreciate the strange back-alley architecture, to catalogue the various kinds of plants growing there, and to look at the objects—things hoarded and stored away and hidden and forgotten about—that accumulate behind the facades of the apartments and homes. It would take far longer to appreciate these aspects of an alley, these minutiae that are its essence. It would take years, decades. There are whole lives to be lived traversing the alleys of Chicago. 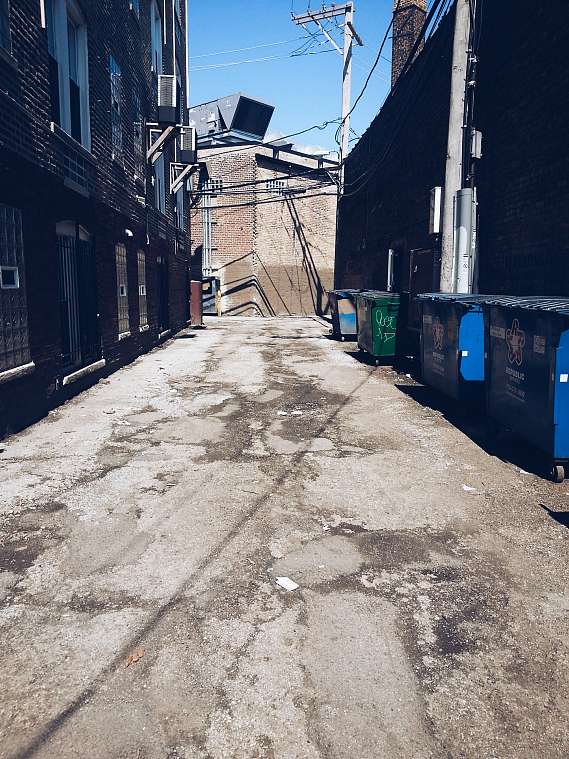 And life lives in these hidden passages already. Rats, raccoons, squirrels, birds who nest in these safe places, a dozen kinds of ivy, at least a hundred kinds of mosses. There are human professions, too, that thrive off of the detritus of back alleys. Metal harvesters, trash collectors, recyclers, ragpickers, wanderers.

There’s a common element here. Something unique happens to bodies in the alleys of Chicago. Existing within or encountering the alleyways has a magical sort of effect on biological life. All of these alley-dwellers are or become seekers, sifters, collectors, those who are made to find things that are lost or rejected, to keep and use and discover value in things cast off and forgotten—those who in this sense are the caretakers of memory. Perhaps it’s a bit of a stretch to say that rats are “caretakers of memory,” but it is no stretch to say that they care more than we do about the things we discard or want to forget about. Their lives depend on it.

As do the lives of those people who have made it their profession to work in the alley. The trash collector rides through these byways, picking through waste and taking care of the soiled couches, wrecked vacuum cleaners, broken fans, torn blankets, and worn-down furniture that we can no longer bring ourselves to fix up and reuse. The scrap metal collectors, like miners seeking ingot, drive their trucks through the alleys to rummage through the dumpsters and pick through burnt husks of couches and strip the hollowed-out armchairs of all their hardware. 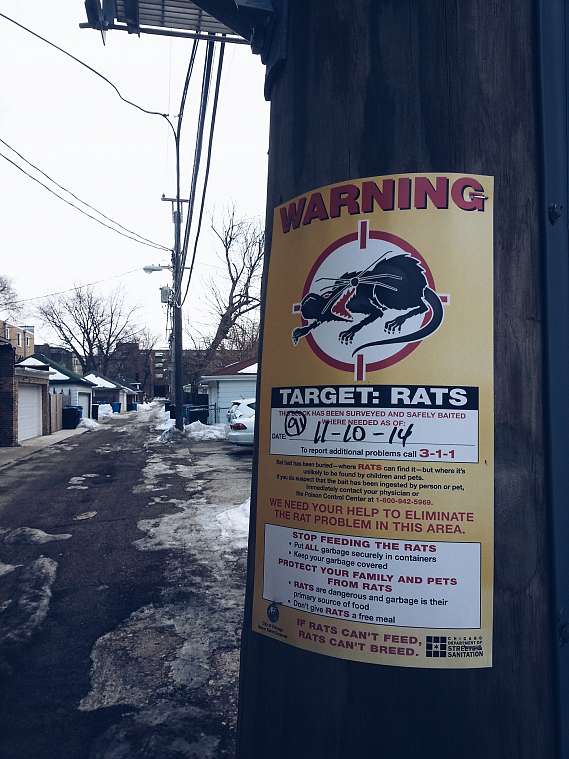 It is a shame that these names (rat, trash-man, tinker, and so on) carry feelings of disgust due to their associations with dirt, grime, disease, waste, and other supposed impurities. It seems to me that back alleys have a fundamental power of lending life to the project of seeking and sifting and caretaking. You don’t have to be a frequent alley-walker to be transfigured by these tasks. Take a walk, leave behind your cell phone, your watch, turn between two buildings where you are able. Perhaps you’ll be lucky enough to find one of the places in the city where the block is big enough or set up in such a strange way as to be a maze of unpopulated gangways.

I’ve found that there are several grids like this in the Chicago neighborhoods of Lincoln Park, Logan Square, Wrigleyville, and Bucktown. In my estimation, you’d be lucky to find one of these spots, because in them you can walk for long swaths of time, uninterrupted by traffic and only very occasionally by another passerby. In these places the buildings behind which the alley runs reach back to different lengths, and are sometimes built in such a way that makes sense from the street but causes strangely anomalous and circuitous itineraries in the space behind the buildings. In these places every turn down another stretch of corridor is a mystery. Will there be another alley? Where does this block end? Whither will the roads bend? Where am I? 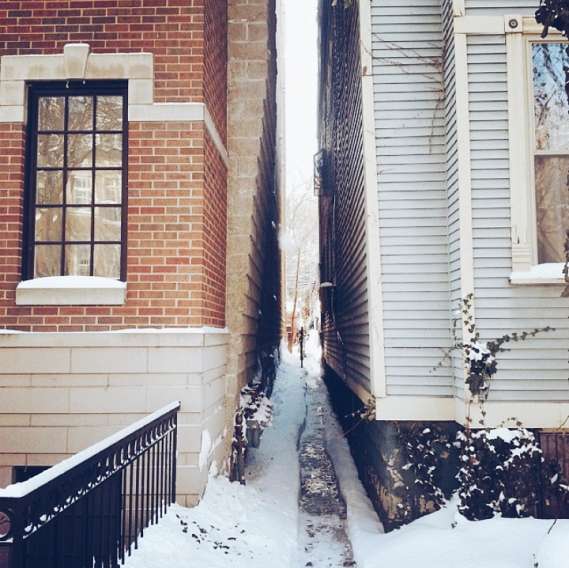 Of course, my enthusiasm might be overblown. I am a straight, twenty-something, white, able male: the perfect amalgam of a body that is relatively safe in traditionally unsafe places. I’ve never more than run into another person in an alley. I encounter more (far more) confrontation on the train or on the street.

But then again, you aren’t usually alone on the train or in the street like you are behind a building in a service alley. That’s part of the appeal and the terror of being in these liminal places. In the middle of the third largest city in the states, tucked away amidst nine odd million other people, surrounded on all sides by the products of human labor, you are alone. What an isolation! You run the risk here of slipping into oblivion. One bit of nothing, by itself, in a space filled with the offal of society. 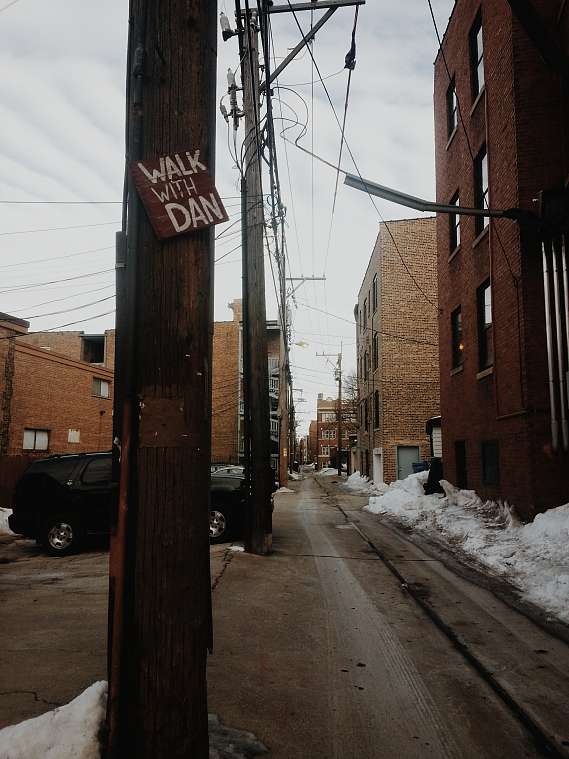 Compare this to the isolation that one feels in nature, walking along great paths between great trees, impressive and still more impressive than the buildings of the city, under the chirp of birds, the air light and earthy, the ground soft and pliant beneath your boots. The wandering that takes place in nature can become a sacred orientation, as some of the most revered nature writers have claimed. Thoreau, for example, finds in the art of walking through nature the highest form of spiritual practice, and goes as far as to say that if he didn’t spend at least four hours in the woods a day, he would lose his fitness of mind, body, soul (in the sixth paragraph of his essay “Walking”).

But what was it about the woods that was so important to Thoreau? Are we as city creatures condemned to miss out on this saving grace? Thoreau says that it has to do with the way the woods encourage you to shed your thoughts of the affairs of the city, to disburden yourself of your normal cares, economic concerns, family problems, and so on. In short, it is a form of meditation. Walking is a way of calming the soul, a method of preventative mental healthcare geared toward cultivating a sound, receptive, and curious mind. It is, as I argued in another article, a philosophical state that leaves the mind pliant, disabused of common notions, unprepared for what it might find and thus more fully prepared to see things with fresh eyes.

To me, reading Thoreau is like taking a very deep breath at the top of a very tall mountain. Living in the city, the inhalations are more short and dangerous than refreshing. Good Henry, the “sainte-terrer,” had nearly unfettered access to “the woods and … the hills and fields absolutely free from all worldly engagements” that he found so necessary to the cultivation of his art of wandering. Besides a few scattered parks, none nearly large enough to spend four uninterrupted hours walking through, if you want to find this kind of wilderness in Chicago, you’ve pretty much got to have a car, or a good friend willing to lend you hers, in order to drive the hour, two hours, maybe three, to get to a stretch of equivalent wilderness. There’s been far too many times when I read an essay by Thoreau, or Nietzsche (another consummate wanderer who perhaps doesn’t get as much attention), or Emerson, or Muir, and then looked out my window onto North Sheridan road and felt miles and days away from the spiritual wilderness in their texts. It’s not as if walking the streets, or down the lakefront, isn’t satisfying. It just isn’t the same. 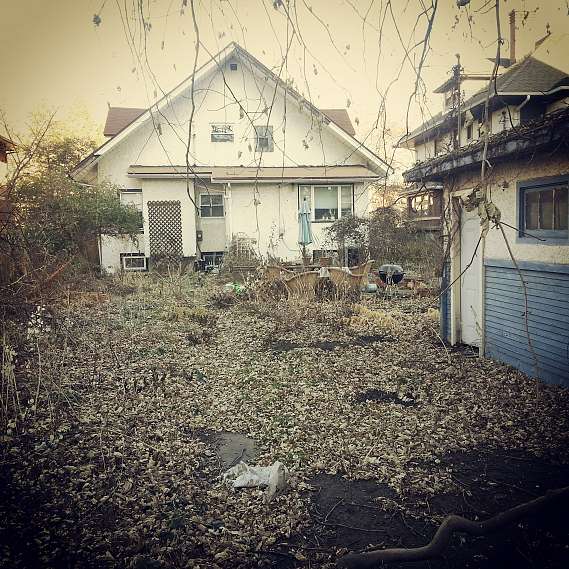 This is why I love the alleys. The isolation there is sometimes terrifying in its completeness. It conjures an overwhelming feeling of being alone, even when you can hear cars, even when you are walking beneath windows that look into the apartments of hundreds and hundreds of other people, even when the passageways are filled with dumpsters stuffed and overflowing with the waste of human beings—even then you feel utterly abandoned.

It is easy to forget about so much here because it is a place of forgetting. The trash bins and the recycling receptacles in the alleys are the last place to see the things we want to be taken away. Of course, we know that our waste is taken to landfills, or incinerated, or processed into new bottles and cans and newspapers, or chewed up by vermin, or carried off to build birds’ nests, or broken down by microscopic mycelium to make mulch for the sproutlings growing in the alley, or any other of the millions of ends that might befall our leavings. But even though we know this, our common sense, which leads us to believe our involvement with waste ends in the alley, is hard to be rid of. 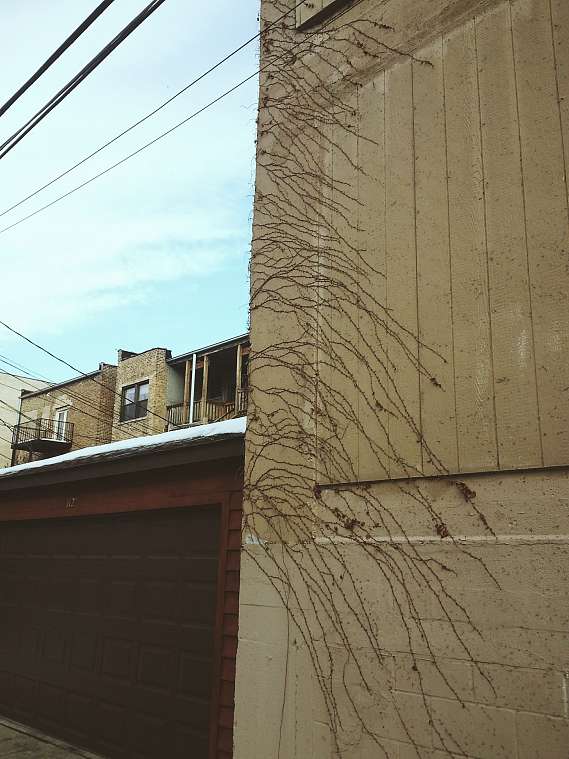 Ironically, when we walk through the alleys and pass all of the things about which we would like to collectively forget, we act as witnesses to those things that most people want to push out of their memories. Borges once wrote, “I cannot walk through the suburbs in the solitude of the night without thinking that the night pleases us because it suppresses idle details, just as our memory does.” But when we walk through the alley, we find that walking in solitude delivers just the opposite effect. Here, it is every detail, every strange piece of discarded clothing, each abandoned street sign, all the weird arrangements you find of perfectly good shoes (How many times I’ve found nice shoes, untouched, in the alley!), that gives walking through the alley its particular appeal.

Distracted from our everyday concerns, as Thoreau might have liked, there is so much to see in the alley, and so much that is trying to be forgotten. There is so much to discover outside of our small isolated lives that alleys are transformed into a kind of absolute urban wilderness. In these kinds of city-based excursions, the alley becomes “the alley,” the place where memory shimmers like a vague mirage; the place where we find ourselves lost and search our selves out of that gap in recollection. 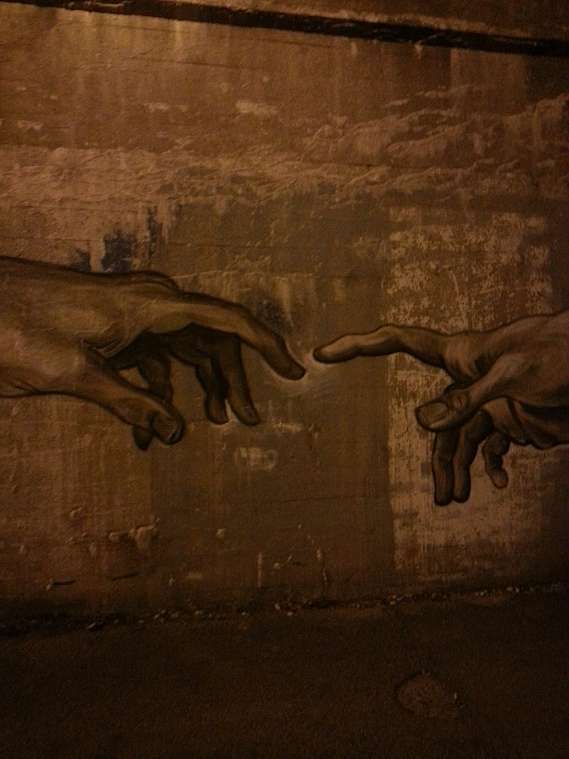