An Etiquette of Sound 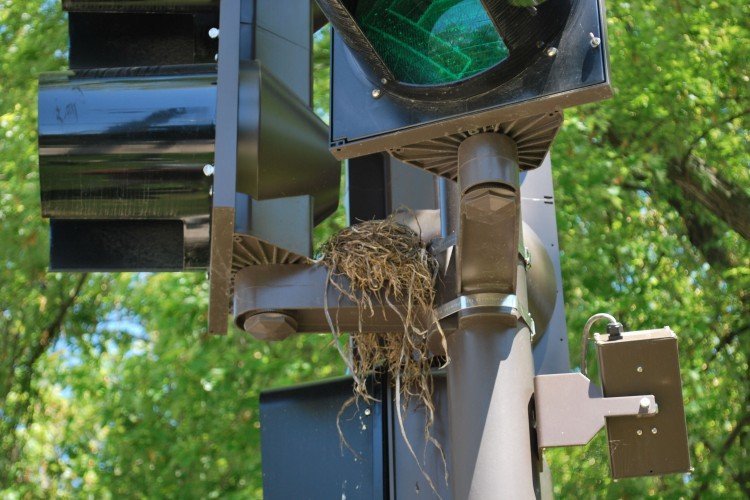 This is not a story about the discovery of a new species of frog in Papua New Guinea. To bring back this information, I neither cleaved wine-dark seas nor sailed capes of hope. I did not climb Kilimanjaro, or run class five rapids in a Tibetan canyon. No crampons were used, ice axes deployed, or emergency flares burned. Supplemental oxygen was not required.

I saw a robin for the first time with my ears.

You may now shake your head and ask, Who is this man of high adventure? Robins are everywhere. Precisely so. And I heard one for the first time.

This spring, at our local elementary school, a barricade was put in place. Nine caution cones sprang up overnight like mushrooms, creating a faerie ring around a potted tree just outside the entrance doors to the school. What danger was afoot? The first thought I had while unloading my son and his backpack in a single-file line was that a broken bottle was awaiting clean-up. The second thought was that a saintly teacher had taken mercy on the young tree, sensitive to its long-sufferings at the abuses of little hands and feet. But what I discovered was more surprising. A pair of robins chose this unlikely spot to deliver and raise their young. 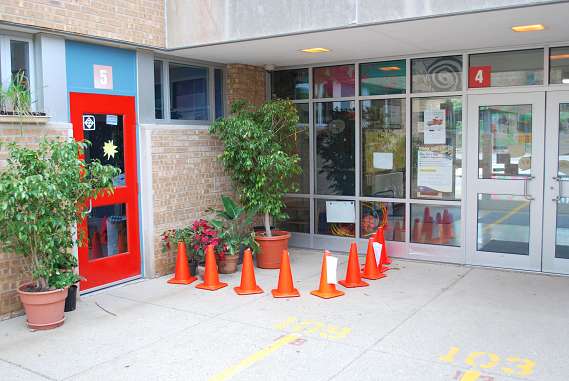 There was no ecological justification to set up a barrier. The city would not suffer were one robin’s nest to fail, nor would the robin population (among the most abundant, year-round residents in town) as a whole feel the impact. There were other reasons at play.

A piece of paper, Scotch-taped to one of the cones, carried this message:

eggs in her nest.

This may be the best example of a “teaching moment” that I’ve ever witnessed—more important than any follow-the-lines printing or counting-by-tens that my son learned in his kindergarten classroom. Though I understood well the absolute impossibility of quiet children at the front entrance of the school—please or no please—this message communicated a simple but profound lesson: other creatures are worthy of our quiet respect. 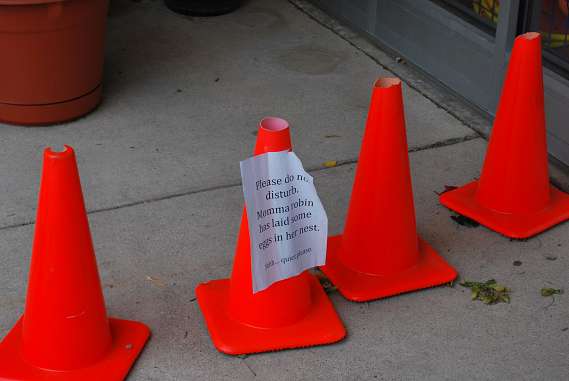 Seeing a nest at eye-level is a treat. No sore neck. No binoculars. But, for me, this nest was still more significant because its appearance coincided with a book I’d recently been reading. What the Robin Knows, by Jon Young, makes an arresting claim by stating that robins know something, and that something is at least worth enough to have a book written about it. 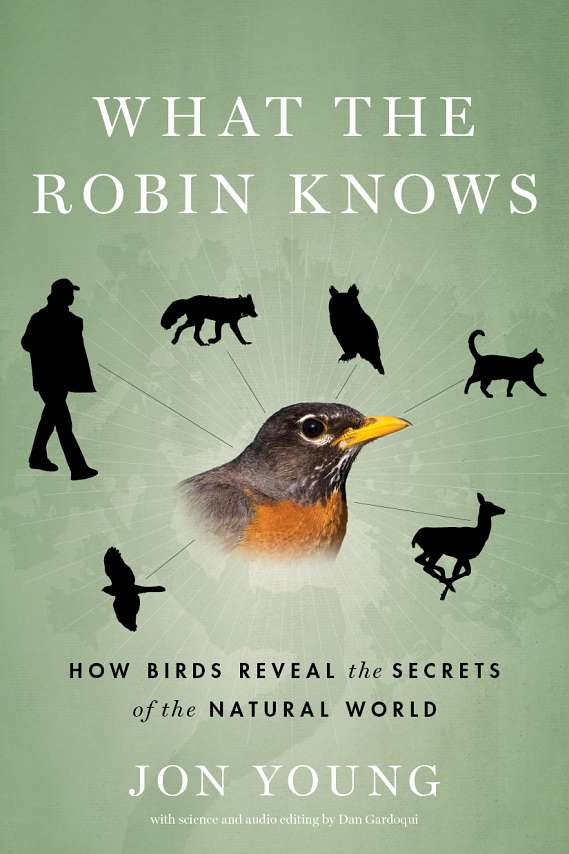 The bulk of the What the Robin Knows is dedicated to “deep bird language,” the five vocalizations that are typical of songbirds (excluding the corvids’ anomalous behaviors). These include the four “baseline” vocalizations (singing, companion calls, territorial aggression, and adolescent begging) and the varied alarm calls that usually signal the approach of a predator. (Which, in a fascinating twist, can be used to the advantage of a bird like a Stellar’s Jay—a corvid—who will imitate predator vocalizations and mimic the alarm calls of other birds. This turns out to be a very useful ruse for diminishing competition around a bird feeder.) The detailed explanations of what these five vocalizations mean, and the behavior that frequently accompanies them, provides valuable perspective into the power of birds’ observational skills. Their survival depends on it. An anthropologist might describe this as Young does, as a “culture of vigilance” (p. 170) that exists on the streets, in the woods, and throughout any given meadow. Every place is “full of little eyes and ears” (p. 69) that obey the unwritten laws of energy conservation.

Take companion calls, for example. Young provides an English “translation” for the domestic repartee that often occurs between cardinal pairs in the form of a series of chips!:

Here’s the rub: you are one of those potential predators, and you will be treated accordingly. But you need not be perceived as such. This is the point at which the book becomes simultaneously very practical and very philosophical. By developing the skill of “diffuse awareness,” “wide-angle deer hearing,” or what Young most often calls “jungle etiquette,” one can come to recognize patterns (baseline behaviors) and when they are broken (alarms and different types of alarms). If you want to avoid alarming birds, and therefore increase your opportunities to encounter wildlife, you’d best learn how not to disturb the vocal gatekeepers. This means expanding awareness, learning to recognize patterns of avian language, and acquiring a posture of care; Young sums it up nicely in a phrase: “softening your presence in the world” (p. 62).

Robins are common where I live. They swarm the open grounds of my neighborhood’s soccer field. They pluck recalcitrant worms from the local playground soil. Their tuneful whistling ebbs and flows between the metallic braking of the commuter train. The robins are common; and therefore, they are uncommonly great teachers. 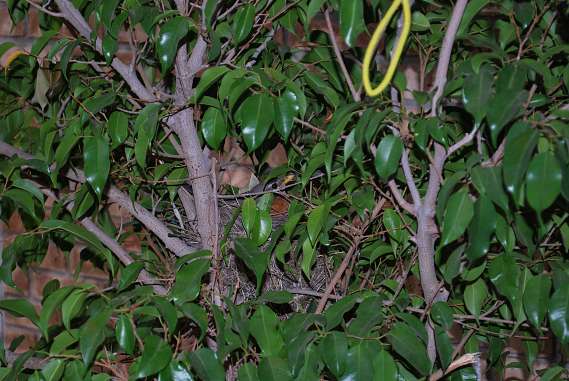 During the nesting of the school robins, my son and I often visited the school playground after-hours. We checked on the nest together, always careful to maintain our sanctioned cone-based distance, and kept tabs on the progress of the young mouths as they expanded to fill out their woven-twig abode. On one of these trips, we happened to ride our bikes onto school grounds with three other migrating boys that we somehow picked up along the way… That’s when I heard my first robin.

I’ve heard many robins before, of course. In the back of my mind I vaguely apprehended that chips and tuts and zeee-bits had some communicative purpose. But it was indistinct “bird song” to me. Chatter, like all background chatter, it blended into the larger soundscape of a visually-oriented life. Meanwhile, I attended to pressing matters, like checking for cars at the crosswalk or keeping my child from running face-first into a tree. This time, however, because I’d been cued and prepared for it, I heard something new.

As the boys raced each other across hopscotch-scored blacktop, they whizzed too close to the caution cones. Zeee-bit! and up from the nest flew the mother. The kids created a perfect bird plow. The robin dashed a straight-angled flight line to the low-hanging branch of a honey locust tree. Now at a safe distance, she assumed the sentinel posture, scolding us in a series of agitated tuts and buzzy trills. The boys were oblivious, of course. They moved away from the nest on their own accord, preoccupied with their first of many rounds of tag. The robin gradually unruffled her feathers, her suspicion becoming less emphatic, until she determined that our group was indeed just a bunch of bumblers with non-robin-related intentions. She quieted, flew back to the nest, and resumed her mothering.

Now, it’s fair to respond: any moron would have known what was happening in that moment. But for me, a healing had occurred: the world was speaking and the language was intelligible.

The same season that the caution cones appeared, my son and I were walking our bikes to the storage room of our building when we noticed a funny-shaped rock with an eye. Closer examination revealed a robin fledgling, huddled in the corner of the condominium’s cement staircase. When we approached, the surprisingly large “baby” skipped about, contending with legs and wings that were new to the world. My son, moved by curiosity and the urge to help, tried to corral the bird as we speculated on the location it may have flutter-fallen from. Eventually I scooped its body—a couple of ounces of fragile fluff—into the cup of my hand. With one foot on a gas meter and one on a handrail, I lifted it up to an electrical wire box that showed signs of a nest inside. After vigorous protest, the bird settled on the quarter-inch rubber tubing, seeming content to observe the two of us.

No matter if we inhabit a city neighborhood or a far-flung corner of the earth, avian teachers are everywhere to be heard. Meanwhile, we are carefully watched. We move through well-maintained nonhuman territories. We are constantly stomping through the stomping-grounds of others. How different would a landscape look if the dominant human etiquette was one of “softening your presence in the world”?

I confess, I’ve never heard a tree say hello. Never had a river speak my name. But I do think the world is alive, resplendent with many tongues. There is probably no end to how I can improve as a listener, as a neighbor, as a large-footed biped in a world criss-crossed by wings, traversed by scaly musculature, and palpated by sensory apparati that exceed my comprehension.

I’ll begin with robins. They check on me, monitor my presence. The least I can do is return the gesture and gracefully check in with them.