On an October afternoon when the sun was slanting through the juniper bushes, a red-breasted nuthatch landed on the edge of my wheelbarrow. My husband and I were at our cottage in Michigan’s Upper Peninsula getting the firewood inside. I was hauling logs from where they had been dumped at the bottom of the driveway, and Ron was using an ax to split them. With the bird looking up at me, I reached into my coat pocket and pulled out a handful of emergency rations left over from a hike. I held them out to the small presence and he hopped to my hand without hesitation, picked out a nut and flew into the conifer trees, returning a few minutes later for seconds. 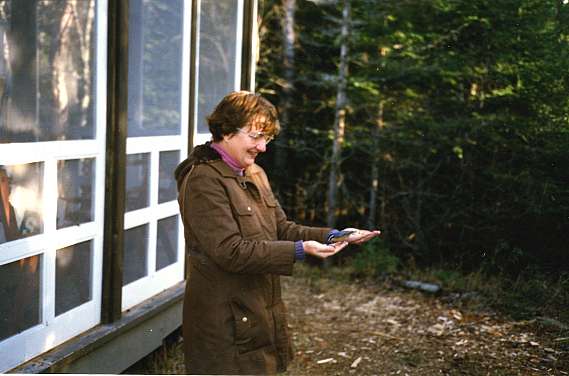 After that, the nuthatch greeted us when we stepped outside the screen door. If he didn’t come right away, we whistled for him and watched amazed as he shot from the trees and swooped down to either of our outstretched hands. He was particular about the nut he chose, sweeping his bill across a palm and scattering all but the desired morsel, typically one of the bigger smoother ones. Ron named him “Presto.”

Our daughter-in-law came up that year, very pregnant with our first grandchild. The nuthatch hesitated, then ate from her hand also. One morning Presto flew down as I walked from the cottage to greet the UPS man. The young driver clambered from his truck and stared. “Lady,” he said, hesitating with a package in his hands, “you have a bird on your shoulder.” 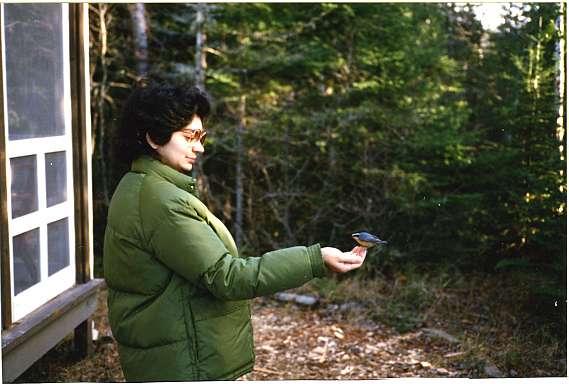 It is hard to escape the feeling that writing about birds is avoiding the pressing issues of the day—especially of this day, September 11, 2013, when the nation ponders the advisability of a strike against Syria. Perhaps by the time this blog entry appears, Congress will have voted one way or the other and President Obama will have made the decision that may or may not widen into an all-out war. The processes of decision-making were different in the times of the powerful Roman empires. A decision that affected the peace of the world required consulting with augurs who would study the flights of birds or the timbre of their voices to determine if the course of action coincided with the will of the gods.

Whatever is decided upon in regard to American involvement in Syria, it is doubtful that any of the players in this moral dilemma will have so “taken the auspices.”

Partly the problem is that birds have gone into hiding and are not around to consult. For the forty million birders in the United States, having to rise at dawn and buy expensive scopes to view fly-sized bodies may make a weekend pastime more exciting, but for augury it is a bad sign.

It wasn’t always thus, that we know. At one time, hunters could knock fledging passenger pigeons right off the nest “easy as spit.” Darwin wrote from the Beagle of the extreme tameness of island species, “almost making a gun superfluous.” Even today, where persons live in quiet isolated locales, curious birds risk bludgeoning and lead pellets to share a spot of tea. I knew a wonderful woman in Australia who kept the windows open and a platter of cut-up fruits on the table for drop-in avian guests. One afternoon a Macleay’s Honeyeater ate a chunk of banana and then wiped its bill on the woman’s blouse.

Some birds are more willing than others to take risks. It is well-known that nuthatches are among the less fearful of wild birds.

Nevertheless, we have a lot to overcome before the majority of birds will trust us with their presence. There’s the legacy of naturalists and explorers who, not possessed of a camera, felt the need to say “look what I’ve found” by other means. My favorite quote in this regard is from American naturalist John Burroughs who said of a long-legged thrush, “I shot it and saw that it was a new acquaintance.” The Scottish explorer of New Zealand, Charles Edward Douglas, excused his eating of a pair of kiwi by saying he had been without food for two or three days. “I was not aware it was an almost extinct bird. Had I known so, I would at least have skinned it and kept the head and feet.”

But why go on? We know what our species has done. No need to dwell on the fate of passenger pigeons that once blackened the skies for hours, the fifteen thousand hummingbirds exported weekly from Trinidad to the hatters of Europe, the drained marshes of the Kankakee, the yellow cape of Hawaiian Chief Kamechameha constructed of feathers from eighty-thousand mamo—a bird, by the way—need I say it?—now extinct.

Yet I feel the danger of not paying attention to birds and the desirability of taking the auspices.

Of course I don’t mean going through the shenanigans of the ancient Romans, classifying birds into Oscines and Alites and giving their every movement and every sound a meaning and interpretation. Nor would I question the rightness or wrongness of every intended action by our elected leaders. But just suppose for a moment that our representatives—the President, the Secretary of State, the various Ambassadors—paid attention to birds. Suppose they stood quietly in the Rose Garden as the sun began to set and listened to the robin’s sweet calling. Wouldn’t it matter? Wouldn’t the decisions they came to, over Syria, over Lebanon, over the Middle East, be more comprehensive, more embracing of all life forms? Wouldn’t they speak for the weak as well as the strong, embrace all of Earth’s inhabitants not just its dominant species?

These thoughts were awakened by a book that I have owned for some time but not read until recently, The Bedside Book of Birds: An Avian Miscellany (Doubleday, 2005), assembled and edited by Graeme Gibson, writer, birder, past president of PEN Canada, who happens to be married to poet and novelist Margaret Atwood.  Gibson collects birds like the Brothers Grimm collected witches. He layers myths, parables, nightmares, fairy-tales, and stories of inter-species friendships with a richness of illustrations of birds on cave walls, Anthenian vases, and tapa cloths. A miscellany, indeed. And why not? As Gibson asserts, “birds had been around for more than 150 million years by the time humans appeared on the scene. We came to self-awareness surrounded by them.”

The collection ends with an illustration so faded that at first you think there’s nothing on the page. Then you see the figures of two men wearing tin hats and recognize by the blasted trees that it is a photograph from World War I. “Approaching the Mecklenburg trench, Bandoviller, France, 1918” accompanies  “Everyone Sang,” by the poet Siegfried Sassoon, who fought in that war, wrote about it realistically, and turned against it, becoming a pacifist. “Everyone Sang” goes beyond a pro- or anti-war stance to proclaim the existence of something indescribable, the exaltation provided by a flock of birds singing as they wing over the battlefield:

My heart was shaken with tears, and horror
Drifted away . . .O but every one
Was a bird; and the song was wordless; the singing will never
be done.

Gibson introduces that final section of writings with this thought:

A great many birdwatchers—from those who simply maintain feeders in their gardens to those, more obsessed, who wander the world in search of new and better birds—have stumbled onto a seductive truth: paying attention to birds, being mindful of them, is being mindful of Life itself. We seldom think of this clearly, but sometimes, unexpectedly, we are overtaken by a sense of wonder and gratitude. Surely it is the encounter with a force much larger than ourselves that moves us.

As Jon Young, the naturalist author of What the Robin Knows, has said, “Eons ago, Homo sapiens were just as alert and aware as all other creatures . . . They needed to be. Now we don’t need to be—or do we, but just don’t understand this anymore?” 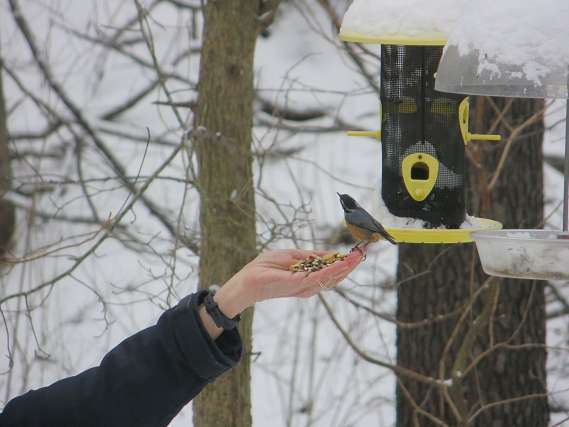 I knew as I skipped up the path to report to my husband about the stunned look on the UPS driver’s face, that I was, in my glee, in no way superior to Burroughs and his shotgun. That year Ron and I left Upper Michigan when the snows came, and although I have heard the tin-horn honks many times, no nuthatch has greeted me again at the cottage’s screen door. But this past winter, twenty-five years after the wheelbarrow incident and eight-hundred miles further south in Indiana, a small red-breasted bird with a bold black eye stripe flew to the feeder ahead of my filling it. I reached in my pocket for the nuts I now religiously carry there.

That it was again a nuthatch is no proof of ancestry but I murmured “Presto” as he wrapped his toes around my finger for balance and removed a nut from my opened palm.