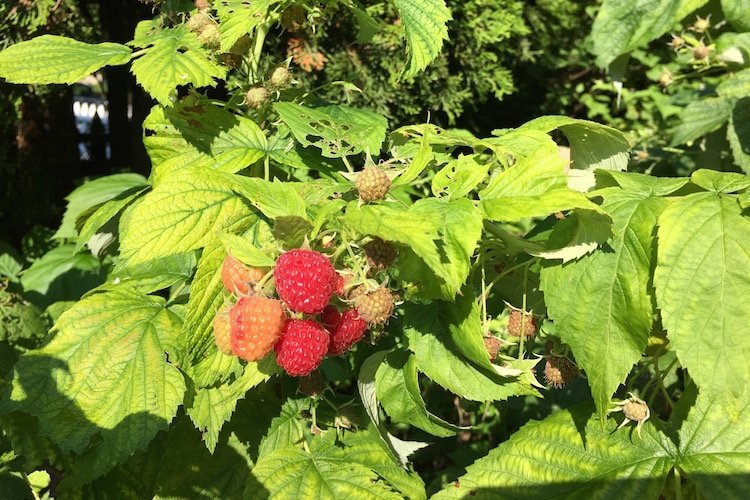 I’ve been writing this blog post for a long time. Decades actually. But the death of the Center for Humans and Nature’s dear board member, George Rabb, prompted me to finish this post, at least for now. George died today. I was at his side when it happened, holding his hand, telling him how much I love him—knowing how far George’s love for life and this world extended. After his death—and after a beautiful, cleansing plunge along Lake Michigan’s sands and shores—I came home to the comfort of beetle love and raspberry perspectives. 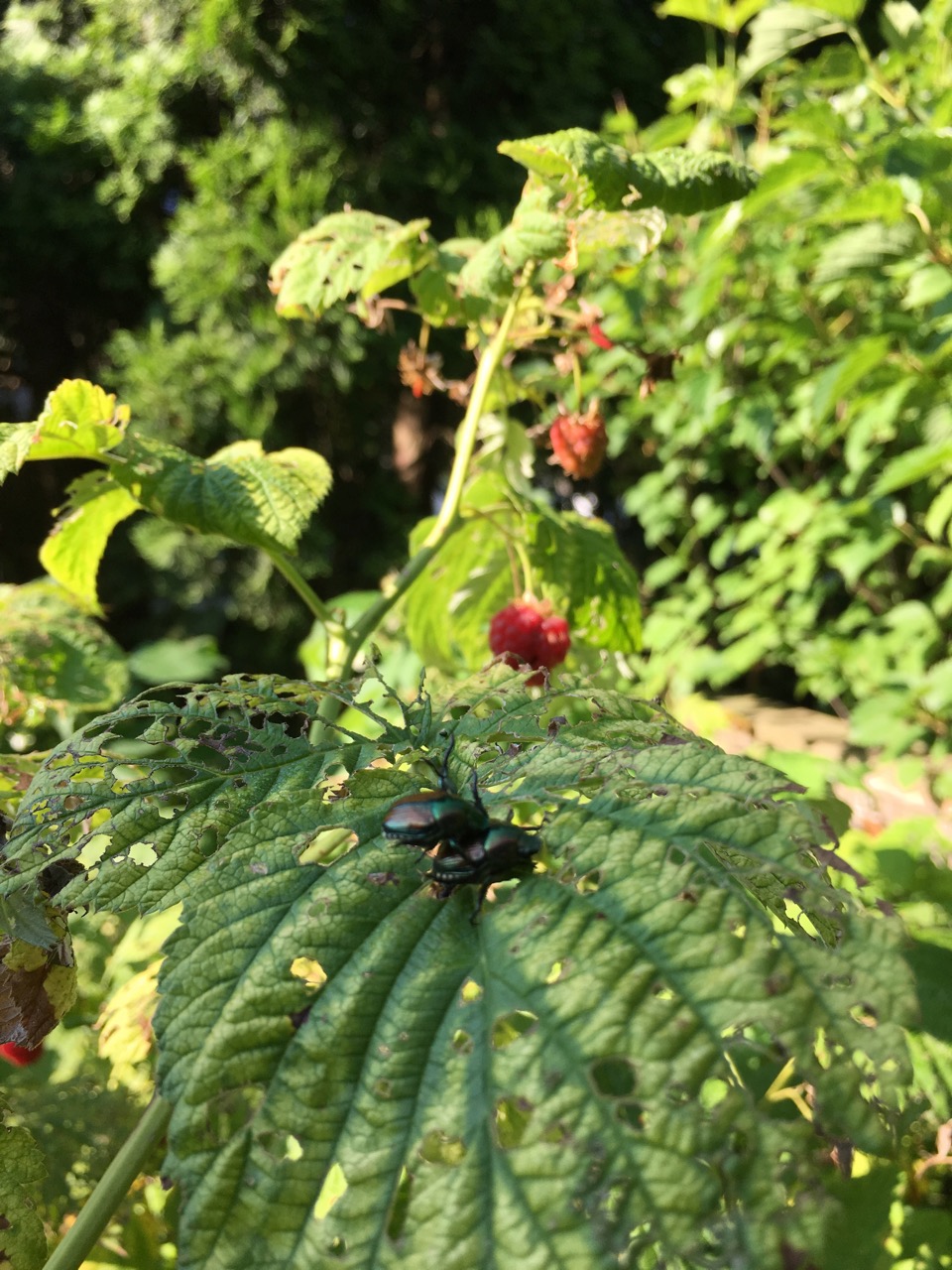 And then there are the beetles who also call this bramble home. Japanese Beetles to be exact. I spent considerable time with Japanese Beetles as a child. My mother was a bit of a stickler about Japanese Beetles, especially when it came to her roses. Starting at six (or was I seven?), one of my jobs was to cull (okay, kill) the Japanese Beetles interested in her roses, flicking them from rose blossoms into the bottom of a jar, a place from which they did not return. The treatment for some undesirable species, such as slugs, involved an intoxicated end. My mother drowned slugs in beer, which can’t be the worst way to go. In any case, thinking now of flicking scores of Japanese beetles into jars… I can’t remember, but I hope they were drowned in beer.

Species affinities aside for the moment, my mother was—and is—an amazing gardener. What stands out to me the most from my tween years is planting daffodil bulbs with her—by the thousands. Every year, she would lovingly select daffodil bulbs from catalogues, and we would eagerly await their arrival by mail. As autumn descended, we planted the bulbs in earnest. Pressed for time before the frost, we would plant bulb after bulb by flashlight, because we believed we had an important role in co-creating the beauty of the land. We would squeeze in all the planting we could before the ground froze. I know I have both her and those chilly fall nights to thank for bringing me to the raspberry bramble now.

Back to the Japanese Beetles. Mother was not alone in her judgment of species. She was backed up—and still is—by the vast preponderance of the ecological academy. As far as I can see, I am the outlier, somehow abnormally conflicted by the fates of “alien” and “invasive” species. My ambivalence has stretched through decades now, surviving a Ph.D. in ecosystem ecology and a stint at Fakhri Bazzaz’s lab at Harvard. If you are an ecologist, you know Bazzaz. You’ve seen his name on hundreds of the most influential papers in our field. Bazzaz was a pioneer in climate change science and, in general, he was a mastermind ecologist. When I came to his lab, he had a cadre of amazing students (some still dear friends of mine) who nonetheless reacted with horror when I questioned whether “invasive” species should be mercilessly eradicated by us—their human judges. I still see their dropped jaws when I wondered aloud whether these “aliens” might be given a pass to find their way over evolutionary time. After all these years, I still harbor the same question and ambivalence.

I know I continue to be on the ecological outskirts. In my garden, I wouldn’t dream of flicking Japanese Beetles into a jar or even offering them beer. It would distract them from their task at hand—profligate lovemaking in the raspberry bramble that I call home. Can I blame them for being “invasive?” Who am I to judge? Nor can I blame them for picking this bramble for their rendezvous. From my perspective (minus the thorns), they have chosen a delicious, intoxicating spot. 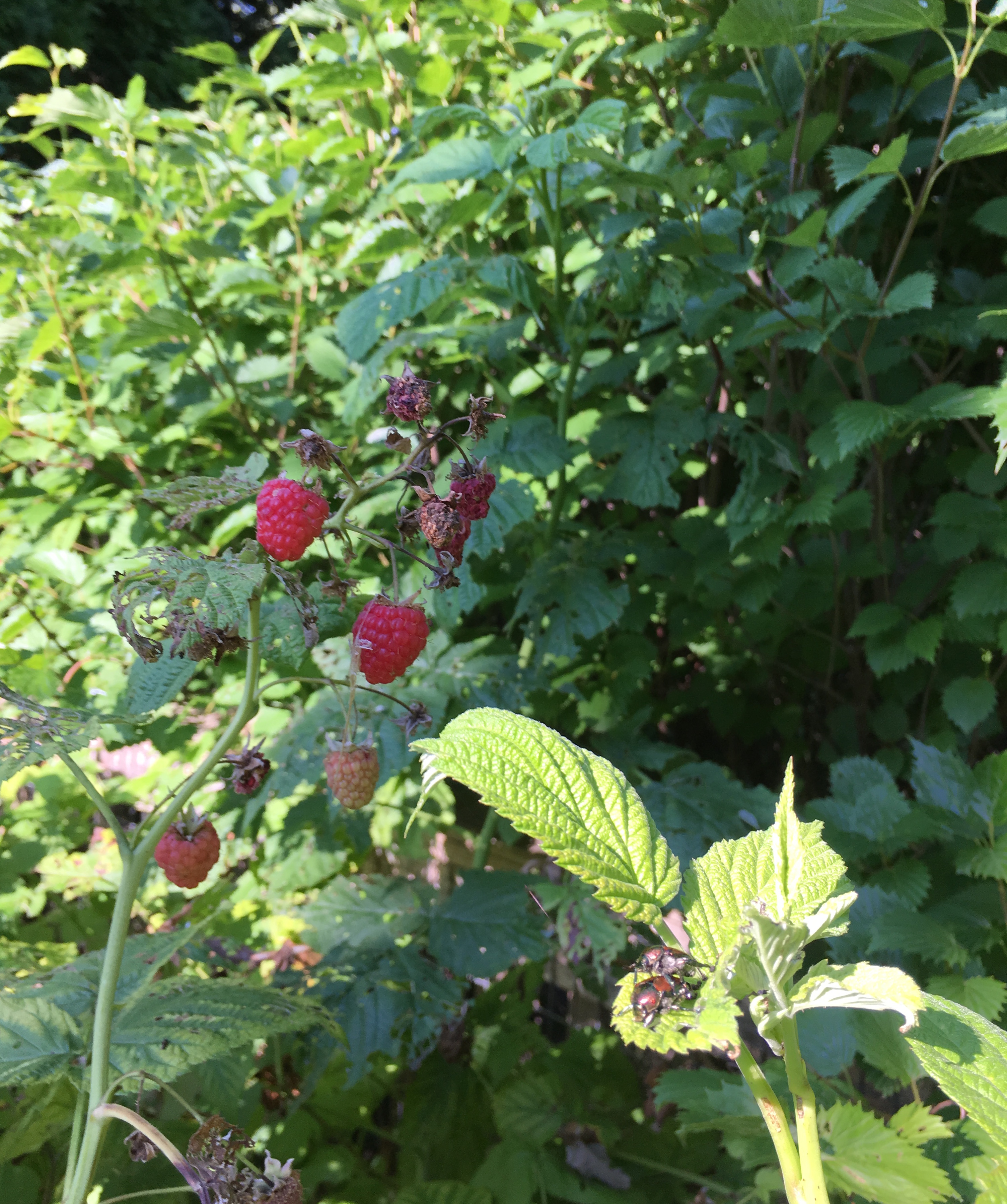 Today, after George’s death, the calling of raspberries—and beautiful beetles—was a special comfort. As I ducked and weaved through the bramble, I was making sense of life in my usual way—by picking berries for my two little girls’ dinner. In the midst of my berry picking, iridescent pairs of beetle lovers were oblivious to other beetle trysts nearby, sometimes only millimeters away. I accidentally knocked one pair apart, and I was sorry. I must be more careful as I harvest.

The berries always teach me lessons before dinner begins. Tonight was no different. When picking berries, I mainly use color as a signal for which berries are ready to go inside. While color is my clearest sign, it is not the only one. The final test is whether the berry yields to a gentle pull. Berries that do not give way to that tug are telling me—no, wait for me until tomorrow. And I do, grateful that the berries teach me patience and that tomorrow will bring nourishment and beauty.

Most nights, after I have picked all the berries that yield, I stand back, amazed that somehow I have another bowlful of berries. I think, “Seriously, you guys?? Again? You did this last night!!” I experience the generosity and abundance of berries as care, and I send my care and gratitude in return. Tonight, this makes me think of George. The importance of care was perhaps the most central of George’s life lessons. He always pushed those around him to care for the world more deeply—to expand our love to include all species. About this lesson, George could be as thorny as the thickest part of a raspberry bramble. For example, if he thought you were not “bringing nature to the table,” he did not hesitate to “sound off” (to use his words) and let you know it.

There is one more lesson to be underscored tonight. Standing back and looking at the bramble, with a full bowl in my hand, I still see bushes with red berries. And I swear to you, I have gone through all the bushes with the thorough dedication of a Western scientist: up, down, in, out, left, right. No matter. When I move from one side of the bramble to the other, I inevitably miss clusters of berries on the side of the bramble I have just examined! Tonight (same as every night) I have missed berries. There is always more to see—something that can only be gained by looking at the bramble from multiple perspectives. This was another lesson that George brought squarely to the fore. If you were missing a perspective—from zoology, herpetology, conservation psychology, ethology, evolutionary biology (the list goes on)—George would bring you a paper (or a tome) underscoring various points that he did not want to go unnoticed.

In these last weeks, George talked about conservation as caring, reimagining ourselves as global citizens, and the dream of a world environment organization (that would care for the whole community of life) until he could speak no more. In the final hours that I was able to communicate with him, he wrote these concepts in the air and then, with shaky hands, scratched them onto paper with a pencil. Thank you, dear George. I don’t know that you could have left us with any lessons more important than these: to care deeply for life and embrace the insights of multiple perspectives as we do so. It comforts me that the berries teach me the same lessons, along with the promise of continuing to remind me of your insights in the summer nights to come.