Being Unseen: The Commonest Animal That You Have Never Seen 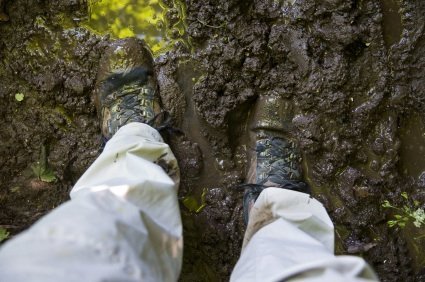 Have you seen this animal? 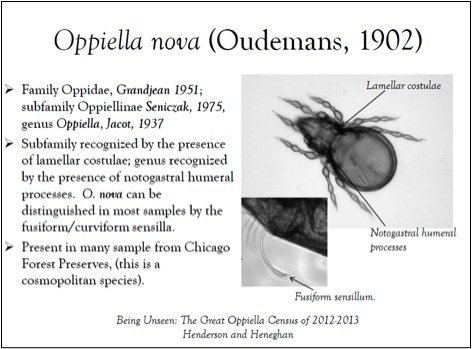 We think it may be the commonest animal in Chicago.

An unusual form of rarity
Conservation biologists typically study organisms that are rare in the sense that they are found in few places and typically have low abundance. Certainly, there are plenty of reasons to endorse the discipline’s almost exclusive focus on rarity. Rarity itself is one of the primary predictors of vulnerability to extinction. To lose biodiversity globally, as we are demonstrably doing, is a matter of great practical importance, since we are dependent on a range of other species for both goods and ecological services, often in ways that are insufficiently appreciated. In addition to these pragmatic considerations, it also would be ethically shameful for this generation to be the one under whose watch many iconic species are lost. Besides, most species are rare! That is, most biological communities are dominated by a relatively few species which are accompanied by a large number of rarer elements. Rarity, in other words, is common.

We have recently begun a project at DePaul University that highlights quite a different type of rarity, namely those organisms that are very common but almost never seen. In the soil, animal patterns are in many respects similar to the ones found aboveground. A few species dominate the abundance of communities, and a large number are rarely found in any one location or sample. That being said, rarity may be even more common in soil communities, at least in the temperate zone, than aboveground. This is because the soil arthropod community is hyperdiverse on small spatial scales.

To give you a sense of the diversity of soil critters in this part of the world, we offer the following calculation: in a typical walk along a woodland path your feet walk upon the bodies of 270,000 protozoa, 135 mites, 3 springtails, and one or more large earthworms with each footfall. These are representative of 30 distinct soil species of which up to half may be previously undescribed by taxonomists! Scaled up there can be as many as 200 species of soil insects and 1000 species of soil animals in every 1 m2 of soil.

The diversity is so great that the soil zoologist Michael Usher has described these communities as being the “poor man’s tropical rain forest.” However, since the soil remains a relatively neglected habitat—even in regions of the United States which are taxonomically relatively well known—the most common soil organisms are relatively unseen, and poorly understood. Intensifying this neglect is the fact that we know next to nothing about urban soil communities. Prevalent members of the soil community are rare in the sense that we almost never encounter them.

One of us (Heneghan) has been sampling soil arthropods for about a quarter of a century. O. nova has been found in almost every sample taken in the temperate zone. However, almost nothing is known about it in the Chicago area, or indeed in any urban region.

We will provide a detailed description of the natural history of O. nova in a future post. For now, just a few brief notes: the species seems to have a worldwide distribution (though Heneghan has not collected it in tropical samples). It is parthenogenetic, which means it practices a form of asexual reproduction where development occurs without fertilization. It feeds on fungal hyphae—underground filamentous strands of fungi. Along with other mites and as part of the diverse community of soil organisms, it plays an important role in the decomposition of dead organic matter. Decomposition is the vital cousin of plant production­—unless the dead are broken down the living do not persist. Thus, although O. nova is inconspicuous, its effects upon the more conspicuous aspects of this world are not.

Outline of our project
In our project, we are attempting for the first time to do a census of the Chicagoland O. nova population. Indeed, this may be the first attempt to do a city-wide census of any urban arthropod! We will not, of course, count every mite. Rather, we are employing a sampling design that will allow us to extrapolate from a large number of representative samples throughout the entire city.

Where you fit in
Initially our “census-takers” will be DePaul students who will assist in evaluating our techniques, after which, in spring next year, we go city-wide. If you are interested in helping us, please follow us on Facebook where we will update you on our progress and announce positions for “census takers” for spring. Or you can, of course, just email us for updates. Email Oppiellanova[at]gmail.com

In future blog posts we will provide more details on this neglected animal and updates on the results.