Belonging in the City 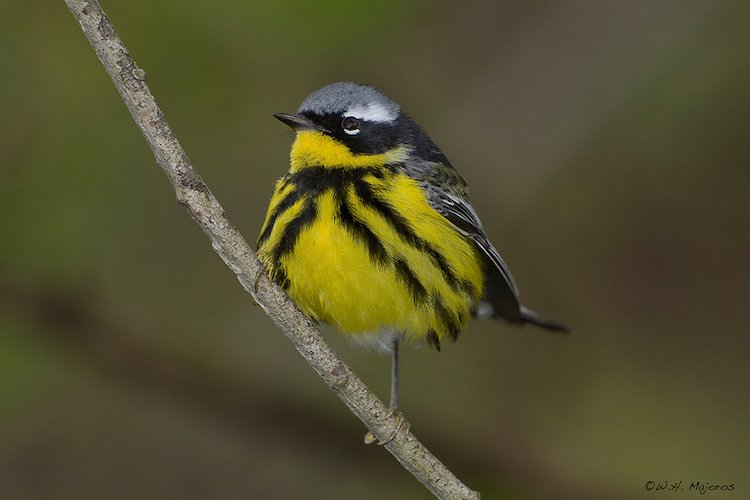 “Tis yet to determine where the fault lies that we understand not one another—for we understand them no more than they do us; and by the same reason they may think us to be beasts as we think them.”

South of Diversey Harbor, Lincoln Park begins to widen considerably to the west of Lake Shore Drive, taking on some of the grandeur of famed architect Daniel Burnham’s vision for the city’s parks. There are lagoons, formal gardens and a botanical conservatory, strolling promenades, groves of stately oaks and elms, and statues to European literary masters, Civil War Generals (our man General Sheridan on his steed), and of course to Lincoln himself. The crowning stamp of the area’s Victorian character is the city’s Lincoln Park Zoo. 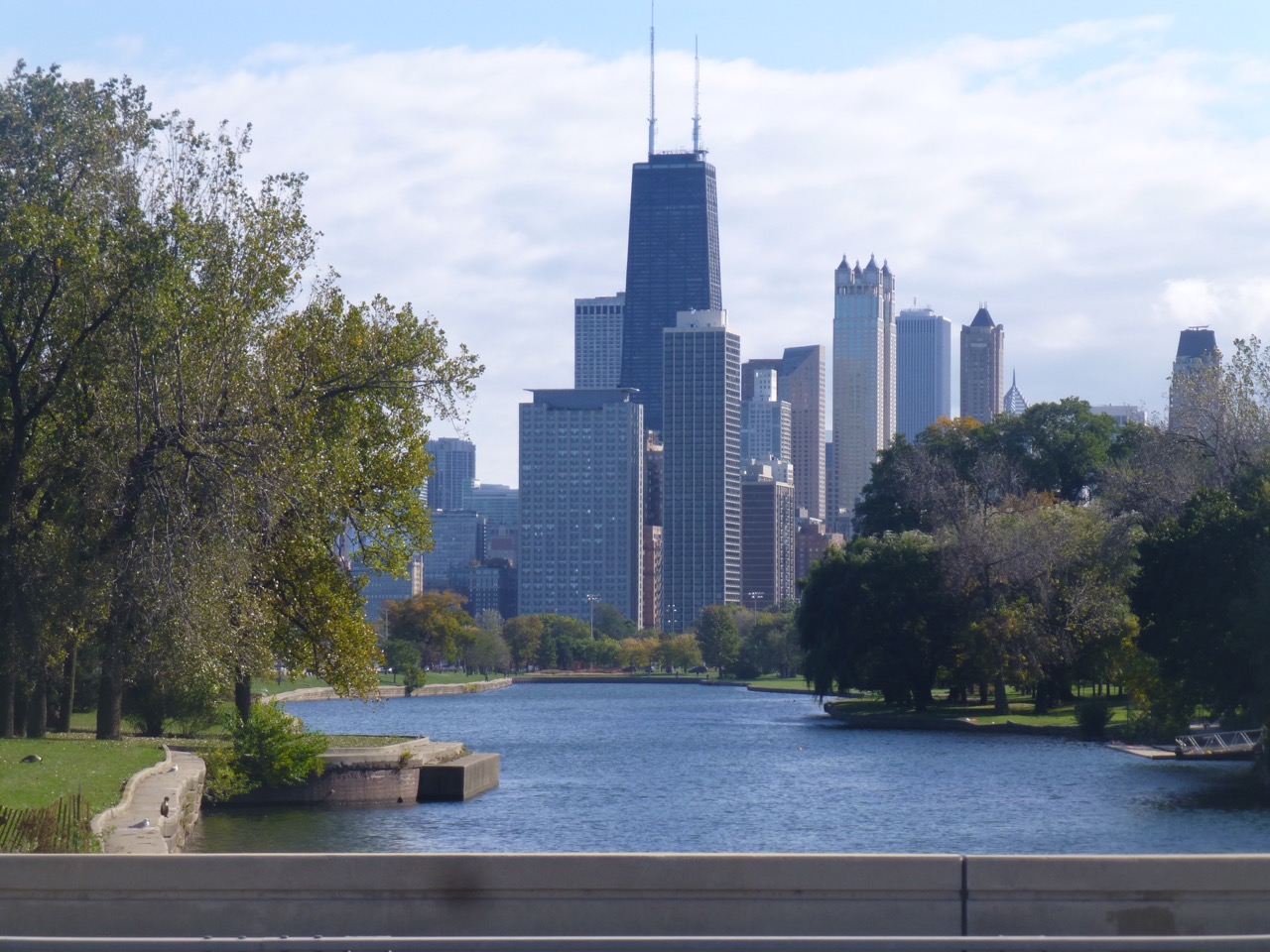 The last time I visited the zoo, it was not to see any of the actual animals enclosed within their cages, but to observe the annual nesting of the normally reclusive black-crowned night herons. They fill the branches in spring around a very busy lagoon full of paddle boats next to the Zoo’s quaint and popular exhibit of farm animals. The herons, endangered in much of the United States, seem very happy in Lincoln Park, even nesting there in large numbers.

Today the oak trees and their shadows over the concrete give me an emotional flashback. I turn my head quickly to the water and then back ahead, as a memory comes to me of the dog I used to bring here sometimes twice a week in the summers so that both she and I could get our exercise.

She was a mixed breed from rural Indiana—hunting dog and beagle with a keen herding instinct and so much energy and intelligence. Here she was on the lakefront for me again, her shadow swimming out there in the rough surf, paddling away furiously trying to keep up with me as I swam out.  She’d seen me through a very difficult time in my life during those early days of my discovering I’d contracted HIV, when I retreated from the world not knowing how long I might live. She pushed me out, day after day, as dogs do, demanding that I reengage with the world and its embrace. We came out to this very spot, though then it was a crumbled collection of limestone, and here she fetched anything and everything anyone might throw into the water. What a show-off she was, who absorbed the world with that unbounded enthusiasm that dogs can display for life, making humans look like dolts and dumb creatures.

I wonder if city birds look at us in this way. The question wouldn’t have occurred to me several years ago, because city birds didn’t draw my interest at all. I never had patience for bird-watching in the city. Even in Chicago, where in spring and fall the shores and marshes could be thick with migrants, bird-watching depressed me somehow. I associated it with backyards and children, domesticated nature for domesticated people, bird-feeders and bluebird houses, reminding me of my parents’ suburban home and its ivy-thick woods and its wren houses in the redbud trees, its jolly red plastic hummingbird feeders next to their tomato plants on the concrete patio. Real bird-watching, to me, was staring into the eye of wilderness; it was sitting alone on a cliff overlooking the borderlands of Arizona as a kestrel floated up from the canyon floor on a eddy of wind and held steady in the air only feet away; it was watching an osprey ripping open a fish on top of a tree stump while kayaking through the swampy inter-coastal waterways of Florida; or it was diving under the water to avoid an attacking gull in a remote Scottish lake in the Highlands. Bird-watching was encountering what was left of what was once wild in me.

But as I’ve aged, I’ve become either more desperate or more grateful for whatever bird happens to catch my lonely eye—those hawks on the wires along the highways, those crows sounding off from tree top to tree top over the park, the dead kinglets with their ruby crowns fallen from the forty-second floor after flying into a sheet of glass. 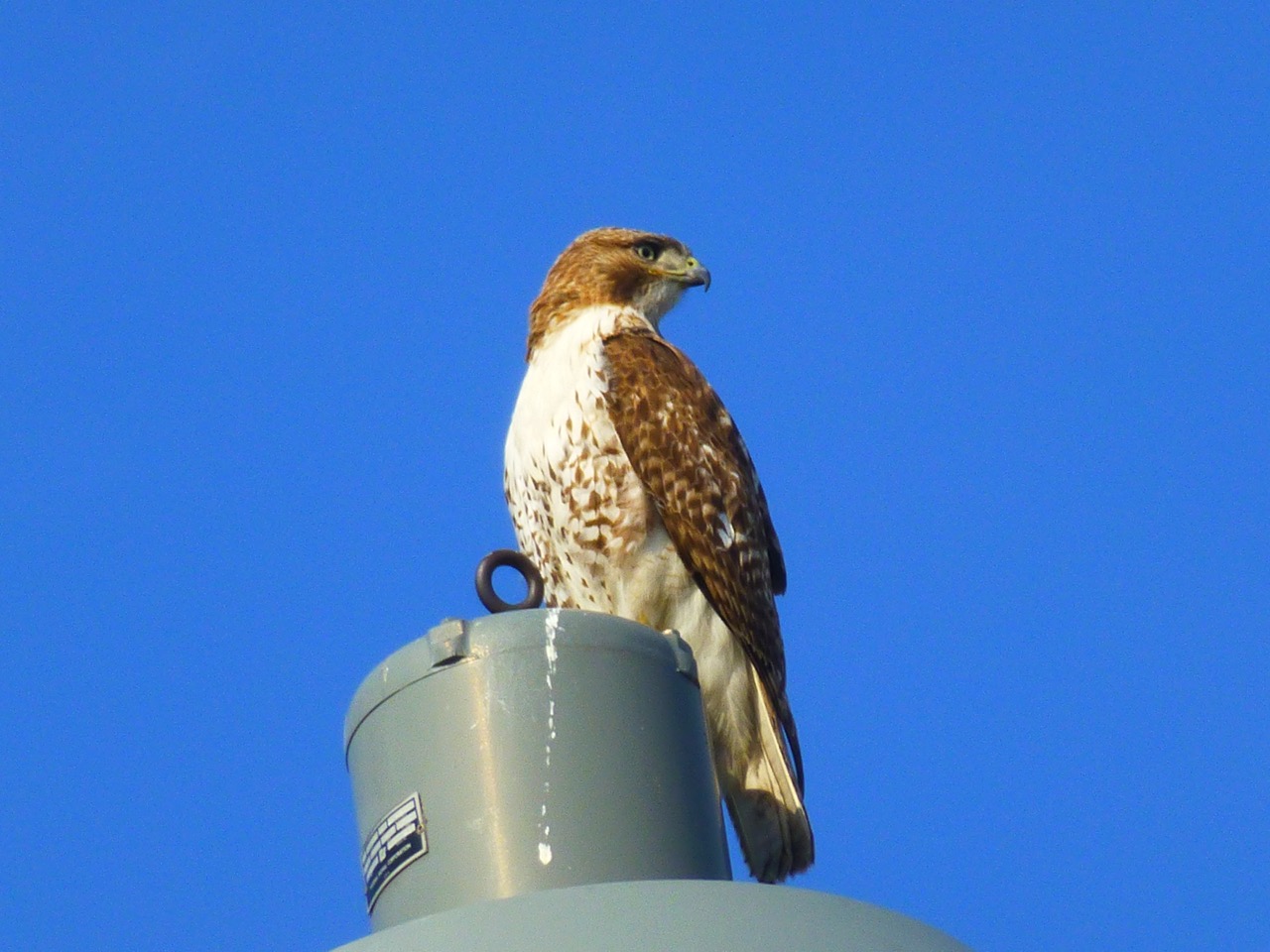 It also includes those last times with my father before we found him in the yard gasping for air. He had quaint bird feeders on his patio that filled the awkward moments of silence when we were alone together for what seemed like the first time, as my mother was now walking around and around the hallways of an Alzheimer’s wing across town. Before he died, we’d sit in their family room that looked out onto two acres of woods and he would point out to me the birds that he’d learned from me, repeating their names for my approval.

During the years I’ve lived near the lake, birds have become like my dog, JD, a source of connection to life. In them I see vulnerability, fragile creatures we all really are, but I marvel, too, at their resiliency and dogged drive to make due with the circumstances before them, with the world as it is. In cities or suburban areas, they seem all that more miraculous, even those that can be a nuisance and are so ubiquitous we no longer bother to notice.

Birds and wild animals provide fleeting moments of observation that come unannounced, which suspend me from those spells where I seem unable to see much of anything alive without feeling angry and sad. And these suspensions, I’ve noticed, come the more you stop and look around at these creatures that struggle as we do to make it through each day.

I’ve spent hours staring out my apartment windows at the sparrows on my little enclosed wooden three-flat porch. I’ve seen morning doves mate; they really do sort of kiss each other as birds do, rubbing their beaks against each other’s heads. I’ve seen them build nests in storms in hanging pots and seen them push their young out into the world of flight. 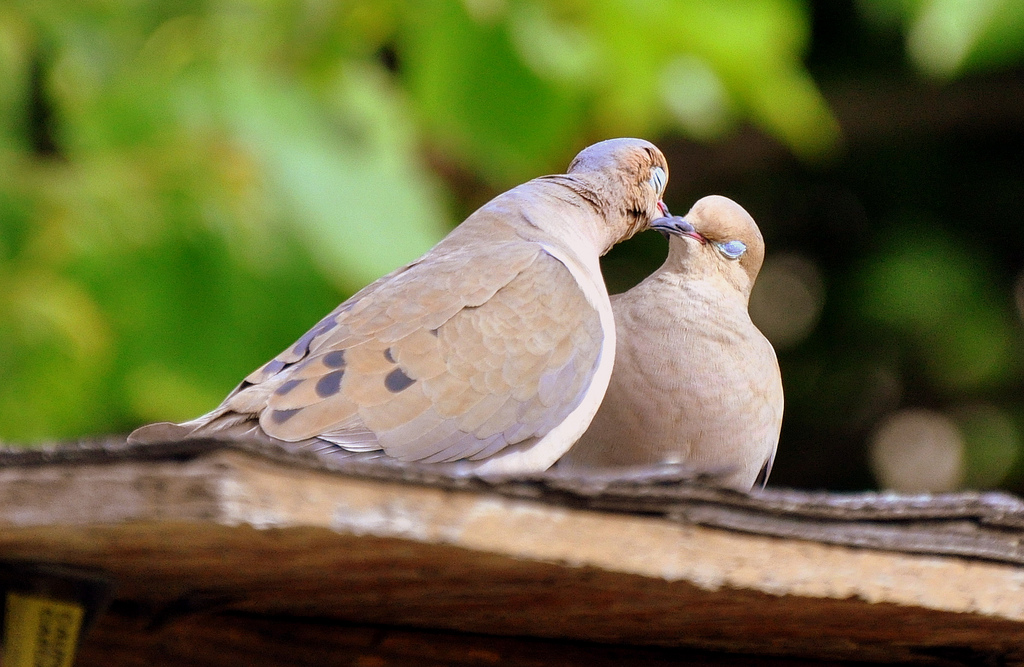 I’ve also seen an attacking sparrowhawk trap and splatter a sparrow’s blood on newly fallen snow, shocking me so that I broke out into a childlike laughter and jumped around my apartment for what reason I don’t know. Red tails have perched on the rail of my back steps and ripped open the remains of something they’ve caught in the alley.

I once had to rescue a pathetic, old white poodle from a swooping falcon on the beach, causing the dog’s owner such alarm that they both thought I was a lunatic.

“Whatdya do that for, you scared my dog!”

“Lady, didn’t you see the falcon trying to attack and pick up your dog?”

And with that she grabbed her dog and pulled the shaggy mop to her chest and walked off, deeply annoyed, and no doubt frightened, though she’d seen me out there on the beach a hundred times.

Other times, I’ve stood in the middle of a sidewalk listening to a purple finch or a magnolia warbler and without binoculars tried to point it out to a passersby, holding onto their shoulders desperate for them to see it.  And when they do, their jaw drops and they turn and ask: “What is that!—someone’s parakeet? We have birds like that here?” And the awe and innocence that appears on their faces is something that I suppose appears on mine, too. 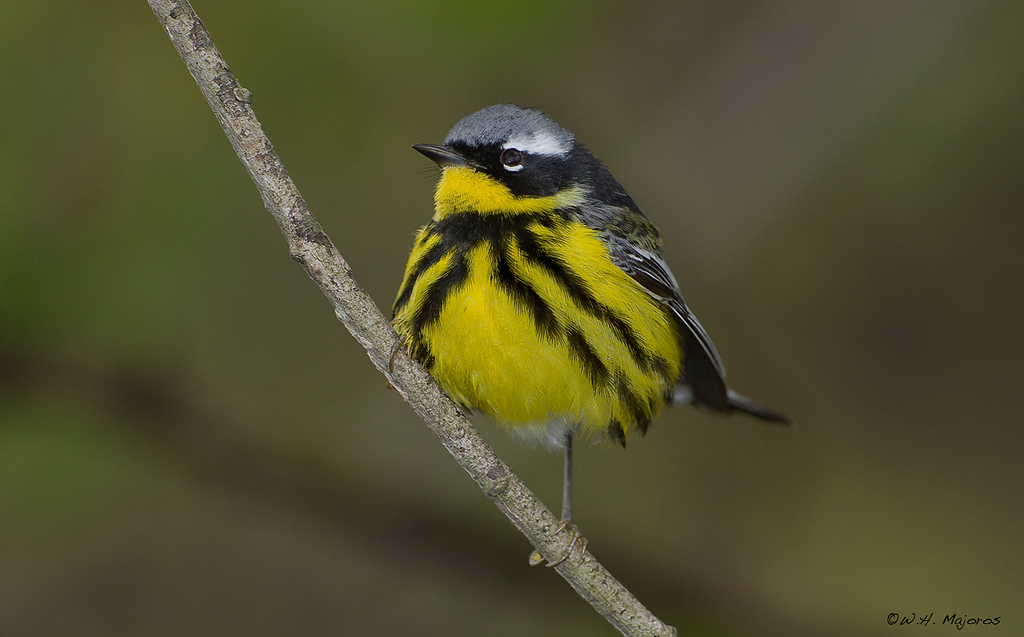 I am not ashamed of it. I almost always stop my car if I spot a broad-winged hawk or osprey, or, if I’m lucky, an eagle circling over a river.  And I remember almost causing an accident in a grocery store parking lot once, when I walked out of the store and heard the unmistakable sound of migrating sand hill cranes, high over the city, forgetting that I was standing in the middle of the exit lane until someone honked, looking at me as if I were high or mentally ill. But there’s nothing like hearing cranes and looking up to see them swirling about, especially in spring.

Meanwhile, flying about along the lakefront and in the park, enjoying their freedom, are crows that draw few people’s glance or curiosity. Yet, these ingenious creatures that use tools, mourn their dead in ceremonial displays, and have been known to verbalize sounds mimicking words and the names of their caretakers are dismissed as a nuisance. Here, they eat the snack bar of yummy trash of Chicago families along with the urban gleaners par excellence—the European house sparrow.

I walk by Lincoln Park Zoo and I am reminded of its origins, how it began with a pair of mute swans donated by New York’s Zoo. A pure white form floating with stately elegance, the mute swan symbolized the grace and purity of idyllic Victorian beauty, which was the standard wealthy benefactors in the 1900s wanted to emulate as American cities began to build their urban parks. Ironically, these days the mute swans are such a menace that some states and cities are trying to figure out how to reduce their numbers due to their habit of destroying aquatic plants and their aggressive behavior during nesting toward other waterfowl and those curious children who find that swans can be quite nasty.

But the introduction of animal species—whether they become invasive or not—is nothing new. In the plant kingdom, it is much worse. Nestled among the beds of flowers (nearly all introduced along with shrubs and several species of trees)—next to the very British Lincoln Park Conservatory, where you can enjoy your exotics from Hawaiian palms to Australian cacti to any number of rare orchids from the jungles of South America—if you look down, you’ll notice the dandelions, another European import, its wily roots pushing through the concrete cracks, hoping its buttery bloom will go unnoticed by the gardener long enough to spread its seed.

Back out by the lake, along the newly rebuilt concrete tiers, someone passes me on a bike and calls out my name. I turn but they ride on. A student, I think. After two decades—okay three—of teaching at half a dozen colleges in this city, invariably students pop out of the cityscape to remind me that despite being a homeless adjunct, I do belong to those who now make up this global city. One day it’s an ambulance driver pulling up next to me on my bike; another day a waitress hustling from table to table; it could be a guy smoking pot with his pals in the park, who sucks in the smoke and waves, or a woman with her cute kids at the street fair; and, of course, all those poets at work at the cafes. It gives you a sense of belonging to a city that can otherwise make you feel as if you have no more weight or purpose than a plastic bag that has been caught in the branches of a tree. 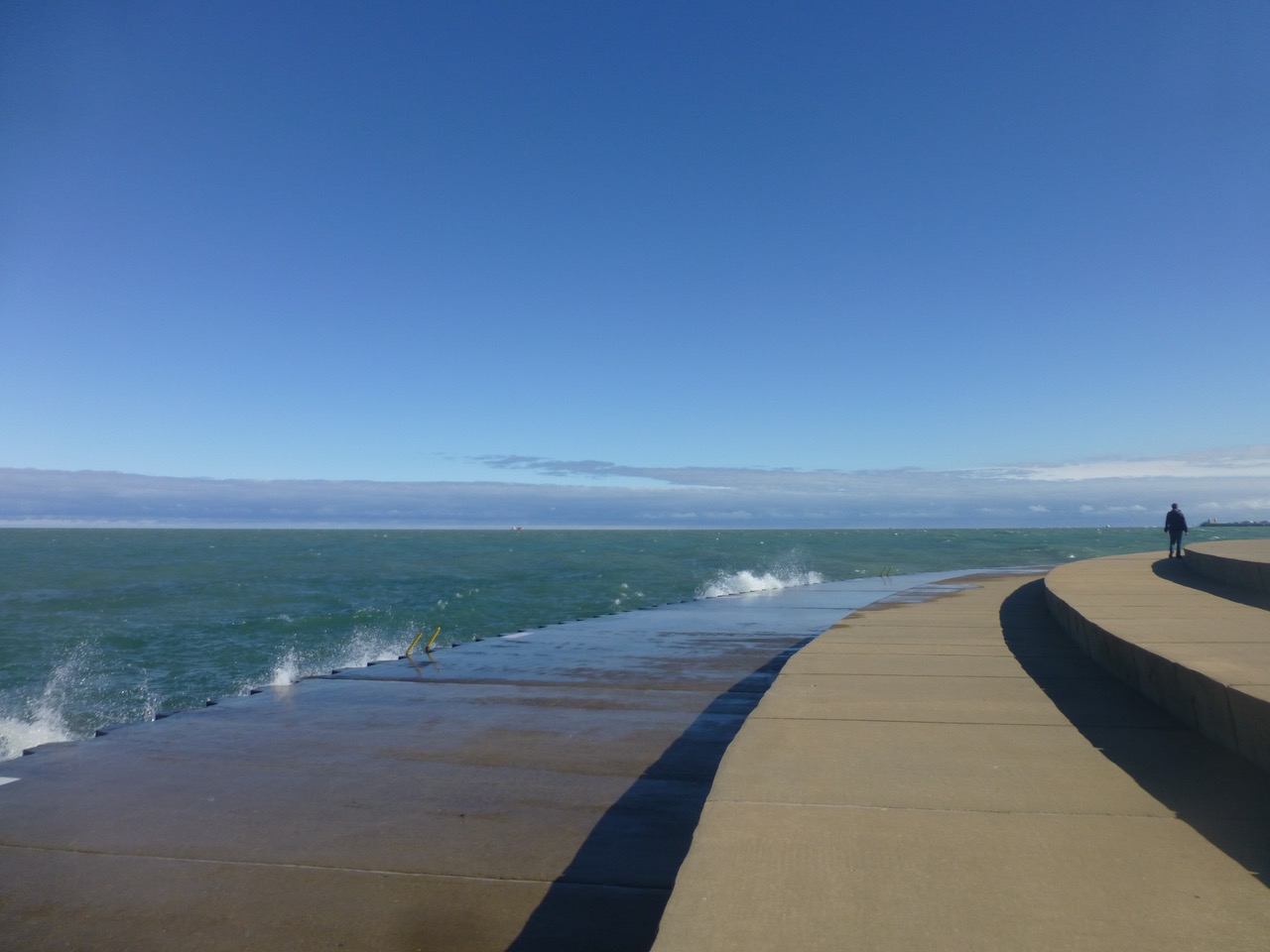 I walk to get to know my neighbors, human and nonhuman, invasive and non-invasive, those who some say don’t belong and those that do. We are all part of the wild mixture of the city, all seeking a place of belonging. I realize I have learned something from the birds of the city. I am not too quick to dismiss any creature now—urban or nonurban—as unworthy, and the more I open myself to the wild without, the world as it is, the more I find something stirring of the wild within.