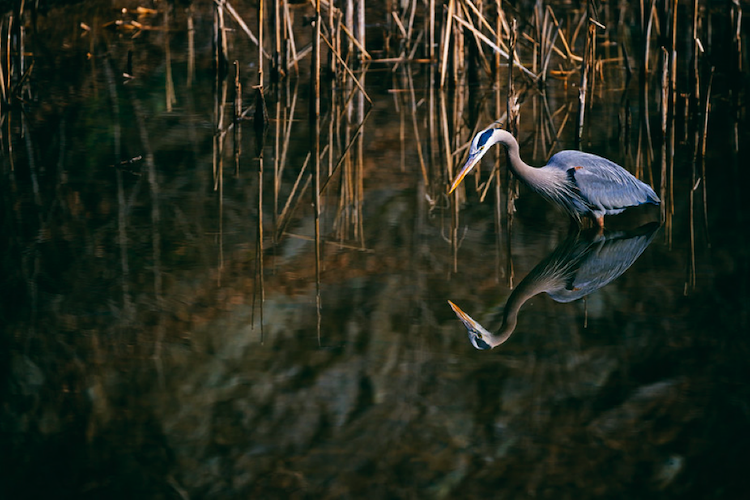 The first time I saw Big Blue, I stopped in my tracks. It was a muggy summer morning, not even seven yet, and the air was thick with the smell of flowering mimosa trees.

My husband and I had just moved to suburban Durham, North Carolina, a flat, swampy ecosystem of strip malls, pocked roads, and scrubby pines. But in an adjacent neighborhood I found a little slice of nature-lover’s heaven—a modest lake surrounded by old growth trees with a small, active community of aquatic and terrestrial wildlife that, to my surprise, included a great blue heron.

I saw his eye first, a fixed yellow orb piercing through the small trees and bushes at the lake’s rim. Standing nearly four-and-a-half-feet high—tall enough to give me a kiss on his tiptoes—and so motionless he didn’t seem real. I stopped running to ogle him, pulling off my headphones to take in his full personage.

He stared at me with such calculated intensity that I started to back away slowly. He wasn’t aggressive, just so still… a stillness that evoked purpose. 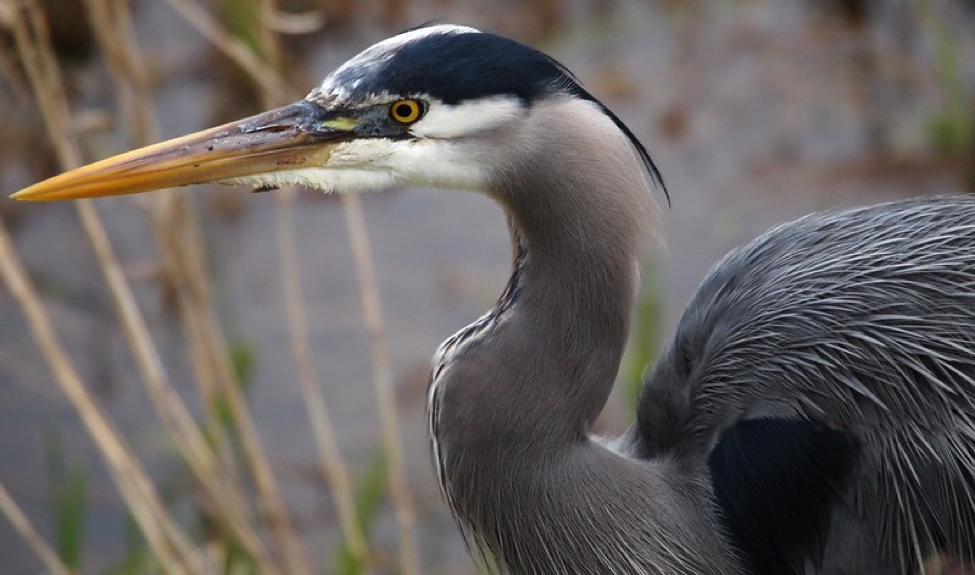 I’d always thought the king of North American herons lived in exotic places—wildlife preserves or tropical islands—not a residential neighborhood within earshot of Interstate 40 and children on a nearby jungle gym. He seemed prehistoric, something you would see in an old, worn book of long-ago creatures, not in the middle of a loud, smelly, modern city.

I began taking short walks or runs to the lake every other day, hoping for another encounter. Returning to the house I would update my husband: “Big Blue was perched on the drain like a conqueror this morning” or “Today he was wading in the shallows.” There was something magical about his presence there.

One day, I discovered he wasn’t alone. His gray-blue queen suddenly appeared in the sky, languidly flapping her expansive wings, then descending as gracefully as a petal on the murky water. 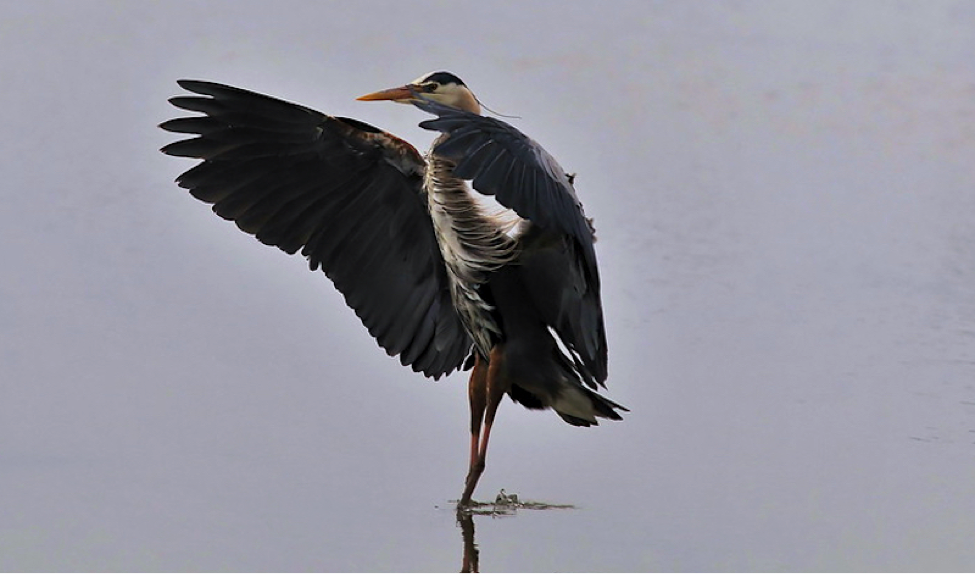 Of course, I wasn’t the only one who had noticed. Big Blue was a celebrity, appearing on the neighborhood Facebook page in pictures of various poses snapped from different angles.

Then, one day in late summer, a disturbing photo. Big Blue stood belly deep in water by the brush line, blood clearly visible on his blue and gray tail feathers. Upon closer examination, the culprit was IDed as a punchbowl-sized snapping turtle, still submerged below the water surface but attached to the heron’s rump.

A team of do-gooders leapt to Blue’s rescue. They called a wildlife rehabilitator and a local DVM for assistance. They donned waders and headlamps and ventured into the water. Eventually they extracted Big Blue from the snapper’s powerful jaws and folded him into a bucket for the trip to a veterinary hospital. He perished there, from injuries that were far more extensive than anyone in the neighborhood had realized.

Tributes on Facebook the next day were somber and reverent. A video of Big Blue fishing in the shallows earlier that summer was posted online, his neck arched into a characteristic “U” as he prepared to pierce the water. Someone else reported seeing his mate fluttering around the lake, perhaps searching for him.

Before long, though, the tone of the conversation shifted. Angry comments began to fly. No one realized snapping turtles could pose a threat to a bird as imposing as Big Blue—would they harm other wildlife, or pets, or children? One neighbor declared, “The snapping turtles have grown too big for our lake and our community.” Another weighed in, “Maybe we should drain the lake and get rid of every last one of them… It’s time for some turtle soup!”

The turtles had their defenders, too, countering, “They have a place here, too,” supporting their claim with a link to an article explaining that snappers help keep the water clean by removing dead and decaying organisms. 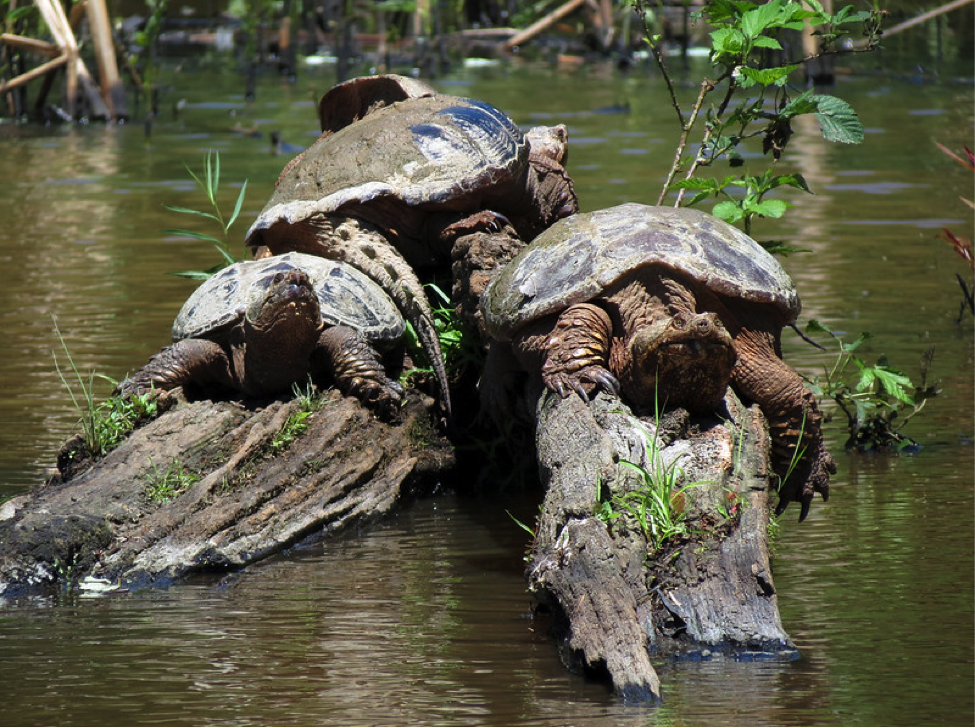 At the same time my neighborhood skirmish was unfolding, I happened to be taking a graduate course in conflict management at NC State. Although the strategies we studied could be applied to any sort of conflict, by the end of the semester we were focused on natural resource issues.

So often, wildlife conflicts aren’t disputes with wildlife; they’re the result of friction between fellow humans over how best to value and protect creatures, habitats, and ecosystems. These human-human clashes can escalate quickly, shattering communities, spawning lawsuits, and sometimes exploding into violence.

One of the philosophers we studied, William Ury, offered a strategy for dealing with discord. Working with groups and individuals in conflict he found that, in the heat of battle, people are caught up in reacting and defending, rarely taking the time to identify what they really need or want, much less a solution they would find satisfactory.

Ury’s “balcony approach” asks each person to look at the conflict as if standing above it, using this alternative perspective to better recognize their feelings and articulate their positive outcome. “One valuable practice is to keep asking yourself, ‘Why?’—as many times as necessary—until you get down to your bedrock need,” he writes in the book, Getting to Yes With Yourself. “The deeper you go in uncovering your underlying needs and interests, the more likely you are to invent creative options that can satisfy your needs.”

When I applied Ury’s strategy to my own community’s quarrel, I had to admit to myself that I was rooting for Team Heron. I was awestruck by Big Blue’s beauty, saddened by the loss of this familiar friend, and outraged that predation by another animal had caused his demise.

In time I came to understand the situation wasn’t quite so simple as “majestic, irreproachable bird attacked by malicious monster.” Great blue herons are predators, too. 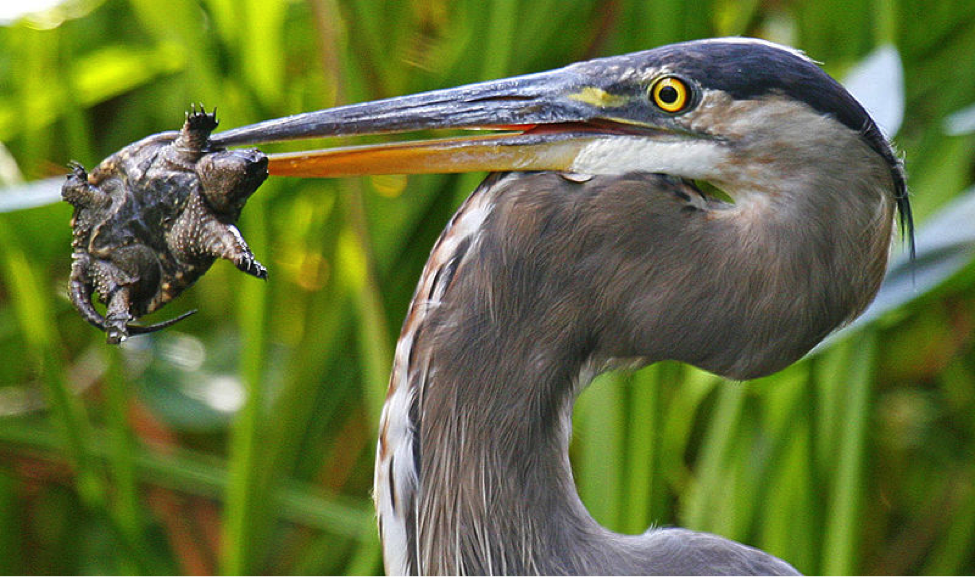 Conflicts—between and among humans and non-humans—are inevitable but they don’t always devolve into war. The feud in my own neighborhood flared but then, thankfully, sputtered and ultimately flickered out. Snapping turtles still call the lake home, and we have a new nesting pair of great blue herons. The two species coexist in a precarious truce; the same can be said of almost any community.

What I’ve learned, both from books and from personal experience, is that we humans have a tendency to take sides, even in cases where the assorted players we root for aren’t actually on different teams. Put another way, I think what lies below the surface of human conflicts over nature is the nature of humans. 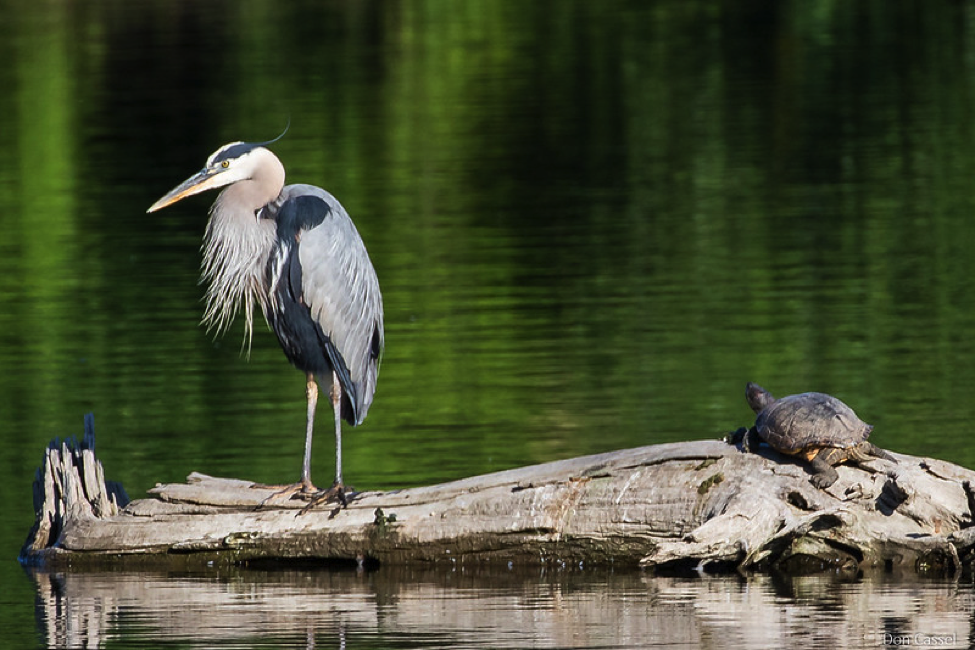