Benefits of Living with a House Spider 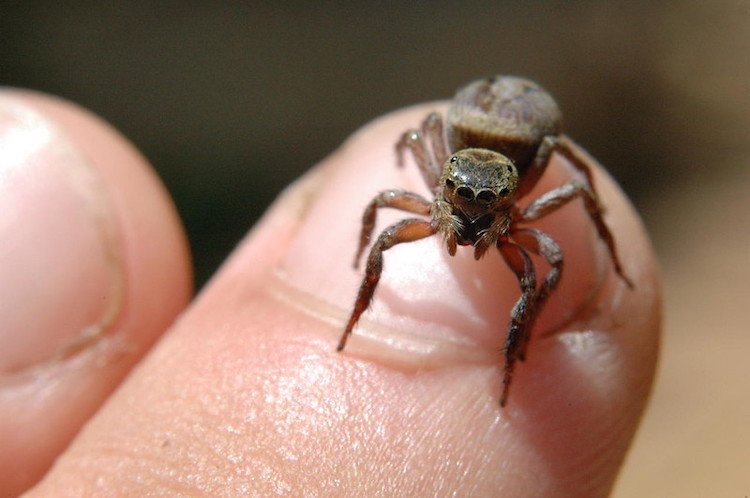 I re-stack folders on my desk, and a little spider jumps out. He scuttles up the nearest wall and stops as if to catch his breath and complain, “Man, you scared me.”

This fellow about the size of my pinky fingernail makes many surprise appearances in my Tokyo apartment. I’m not sure it’s always the same spider, but I like to believe it is. Other types of spiders, such as those with long legs sprouting from a shiny green body, have the power to freeze me to the spot, but this tiny, short-legged, black one beckons me to come close and say hi. The creature is commonly called iegumo (house spider) in Japanese. When I was a little girl, adults told me not to kill them because an iegumo was a sign that a visitor would be coming. Although I didn’t understand why that could be the reason for not killing a spider, I have followed what the adults said to this day.

It isn’t the superstition, however, that stops me from murdering an iegumo perched flat on the wall. He doesn’t evoke the visceral disgust, like a roach does, that spurs me to grab a can of insect spray. And perhaps the iegumo knows that. He stays where he has scampered up, unperturbed by my movements like dusting and vacuuming that could turn out to be lethal to him if I were so inclined. He takes his time traveling from wall to wall and disappears when I’m not looking. In the middle of the night, I turn on the lights in the hall to find him poised on the ceiling, and I think I hear him say, “Oops, you got me.”

Now and then he shelters in the bathroom, in which case I warn him aloud, “You can’t stay here.” As I wash, I frequently splash shower water outside the tub onto the floor and walls, which would convert the tiny space into an execution chamber for the little critter. So, I grab a towel to chase him out of the bathroom before I turn on the faucet.

Random as his appearances might be, the iegumo seems to have his own rules: he comes into my sight only when I’m alone; shows up in short bursts followed by a long period of disappearance; and surprises me by popping up again at a spot I’d never imagine, like on the bedspread. 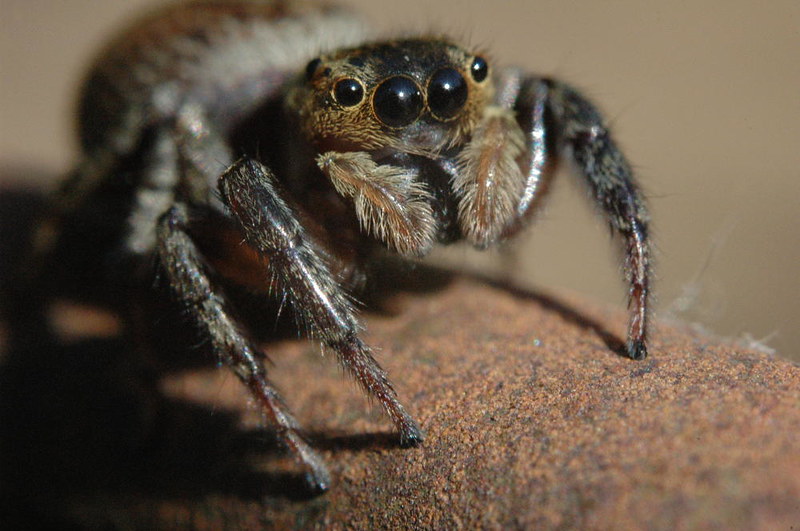 What do these spiders do in a house? Is killing them really believed to bring bad luck? I type “iegumo” in Google, and the autocomplete function lists such words as “kuro (black),” “shurui (types),” and “kawaii (cute)” in combination. Searching for only “iegumo” yields websites with headings such as “Don’t kill iegumo” and “Iegumo are beneficial arachnids.” According to these sites, iegumo’s official name is Adanson haetori (Adanson fly hunter), or Adanson’s house jumper in English. These minuscule spiders, which do not make webs, “patrol” a house for the ticks, fruit flies, and cockroach larvae they feed on, unintentionally providing home pest control. So, there are scientific grounds for giving iegumo a reprieve.

A search with the keywords “iegumo; engi (luck)” reveals a more detailed superstition than the one I heard in my childhood: Don’t kill an iegumo in the morning because it is an augury of a long-awaited visitor; kill an iegumo at night because it portends a thief sneaking into the house.

Then I wonder if spiders symbolize anything good or bad in other cultures. Since Adanson’s house jumpers inhabit warmer regions and are apparently uncommon in North America and Europe, I type just “spiders” combined with “luck” in the search box. According to websites about totems and symbolism, spiders are considered lucky signs connected to money in England, and there is an old rhyme, “If you want to live and thrive, let the spider run alive.” Grandmother Spider in Native American lore protects esoteric wisdom. The spider in Celtic myth teaches the magic of writing.

Other websites give almost exactly the same explanation as the Japanese websites: Don’t kill spiders because they provide home pest control.

All in all, spiders—save poisonous ones—enjoy surprisingly positive reputations for both scientific and symbolic reasons.

These findings corroborate my instinct that I should let my iegumo inhabit the universe of my apartment. Although my affinity for the arachnid has not evolved to the extent that I reach out a finger to pet it, I want him to stay here, dining on pests that my unreliable daily cleaning doesn’t ward off. And I want him to keep jumping out of nowhere when I least expect him, reminding me that ecosystems are at work even indoors in an urban jungle. No amount of technology or modern ways of life can yank me out of nature’s hands wherever I live. This comforting realization is a bonus the iegumo provides in addition to pest control, possible good luck, and tenderness in my heart toward the unlovely, yet endearing, defenseless tiny creature. All of these things are, I believe, worthy benefits available for everyone who shares a dwelling with a house spider. Iegumo in general may presage welcome guests, but my iegumo reminds me that hospitality should also be extended to the arachnids who make our homes not only pest-free but also livelier places.