On the Benefits of Urban Monomania 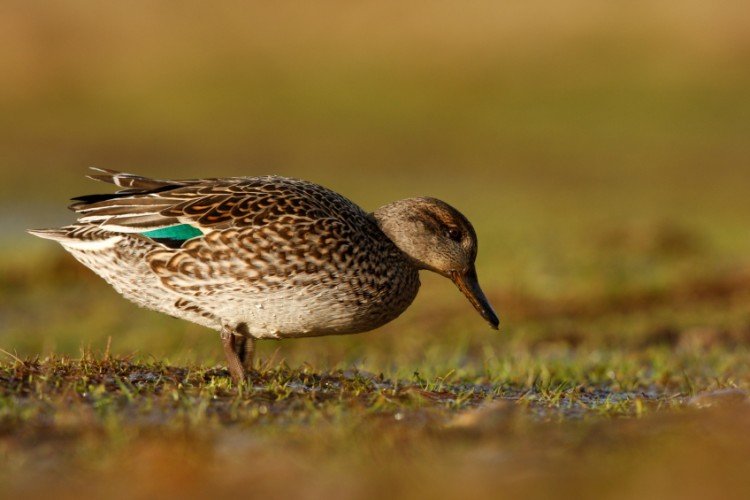 “The lover of nature is he … who has retained the spirit of infancy even in the era of manhood.” If Emerson is right, then perhaps that is why, beyond reasons of necessity and circumstance, I have ended up writing about urban nature. I grew up in Manchester and spent as much time as I possibly could playing outside with the other kids on my street. Sometimes I was allowed to play in the car park across the street, but mostly I played along the pavement near my house—running, racing, skipping, cycling—and on the strips of grass along the verge, where I would practice my cartwheels. At one end of the street there was a small triangle of grass, surrounded by houses and a church—a town planner’s dream of the long-lost village green. For some reason the kids on my street didn’t play there. Perhaps we knew somehow that it would be wrong, even without a “No ball games” sign.

We were in search of fun, and the mown lawn was too much a part of the ordered, adult world. Instead, we sought nature elsewhere and found it in a tree—a cherry blossom that bloomed pink petals everywhere in spring and deep purple leaves in the autumn. It was perfect for climbing, with branches low and wide enough for a small child. I spent a lot of time in that tree. Tentatively, retrospectively, I think I can even say it was one of my favorite places. 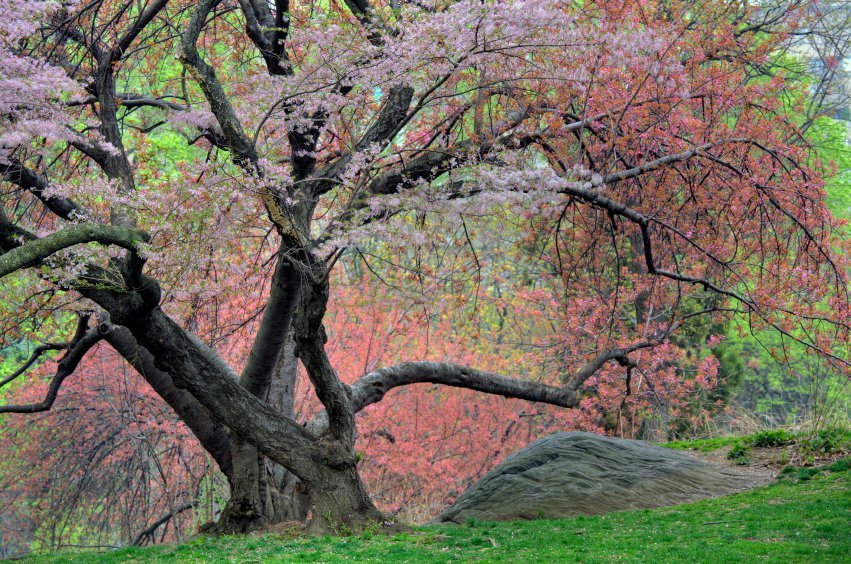 On the weekends, my family would take day excursions out to the countryside. Visiting the countryside, we called it. We three children would be stuffed into the back of the car and a picnic packed into the boot. We would head for the nearby Peak District and at the first whiff of cow manure, my dad would wind down the window and breathe in deeply, whilst the rest of us covered our noses and yelled at him to close it. We would find somewhere to park and then head off on long walks or go rock climbing. In winter, we took tea trays with us and attempted to sledge. We called it visiting the snow.

As a child, I didn’t really make a distinction between the two. The city and countryside dichotomy hadn’t taken root. All that mattered was play, and a street or a tree were as good a place to play as any. Of course, having a whole woods to play in was more fun, but then so was a climbing frame. There was no sense that the city was somehow denuded or lesser; it was more a difference of scale. Later on, when I’d lost interest in playing outside, a desire for countryside as a thing in itself, as a place beyond people and cars and buildings, started to set in. For one reason or another—work, education, family, love—I have found myself living in towns and cities instead. But my desire for exploration has remained, so just as I did when I was young, I find myself throwing on my shoes and heading out into the streets.

Last year, my partner and I moved to Nottingham, in the East Midlands of England. I bought myself a cheap, second-hand bike, and armed with a map we continued the tradition of visiting the countryside on the weekends. We headed off in every direction to explore canal towpaths, country parks, fields of rapeseed and cows strung between housing estates, and patches of woodland. 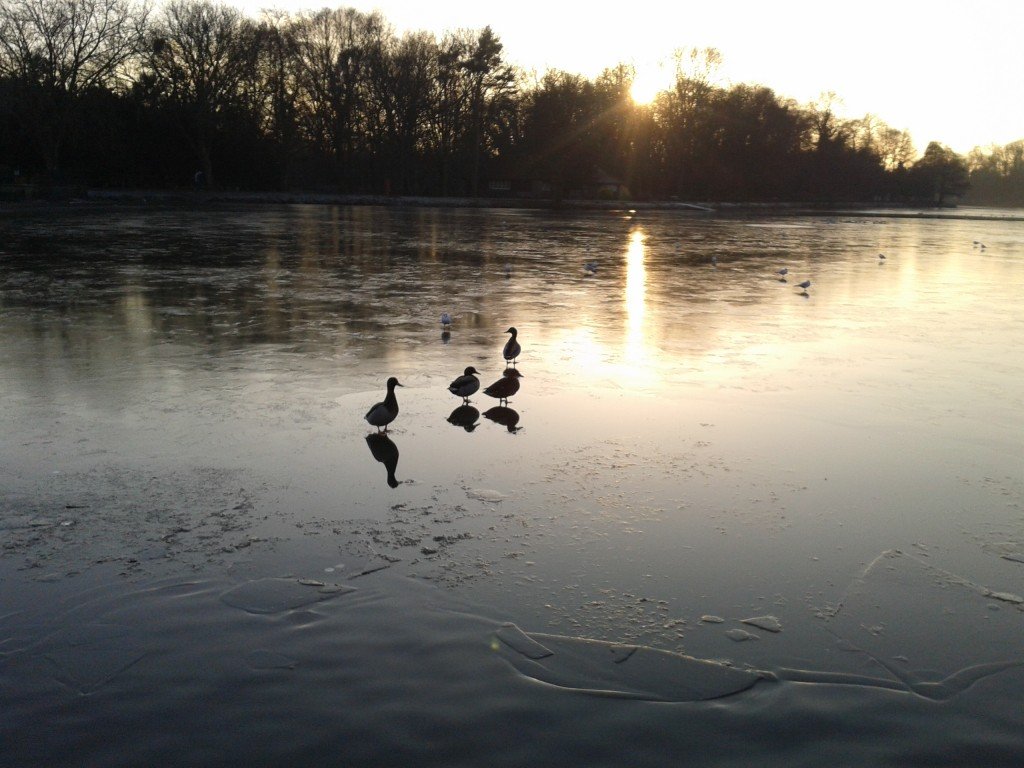 I also started going for near-daily walks around the lake at our local park. On these walks, I slowly learnt to see beyond the familiar mallards, to coots and moorhens; tufted ducks, with their yellow eyes and feathered ponytails; teals (my favorite); and a great crested grebe that always seemed to be disappearing below the water just as I spotted it. Sometimes a lone grey heron could be seen standing out in the shallow water, waiting. There were squirrels, rabbits, and occasionally, a shy water rat made an appearance. In the spring, I saw the swans mating. In summer, a cygnet hatched and grown. Autumn brought the ripeness of fungi, and in winter the water formed a thin film of ice that the ducks would skate across. Everyday, anti-clockwise, I walked and watched, taking notes and photographs. Even when it rained, I didn’t have to force myself to walk around the lake, it became such a part of my day. 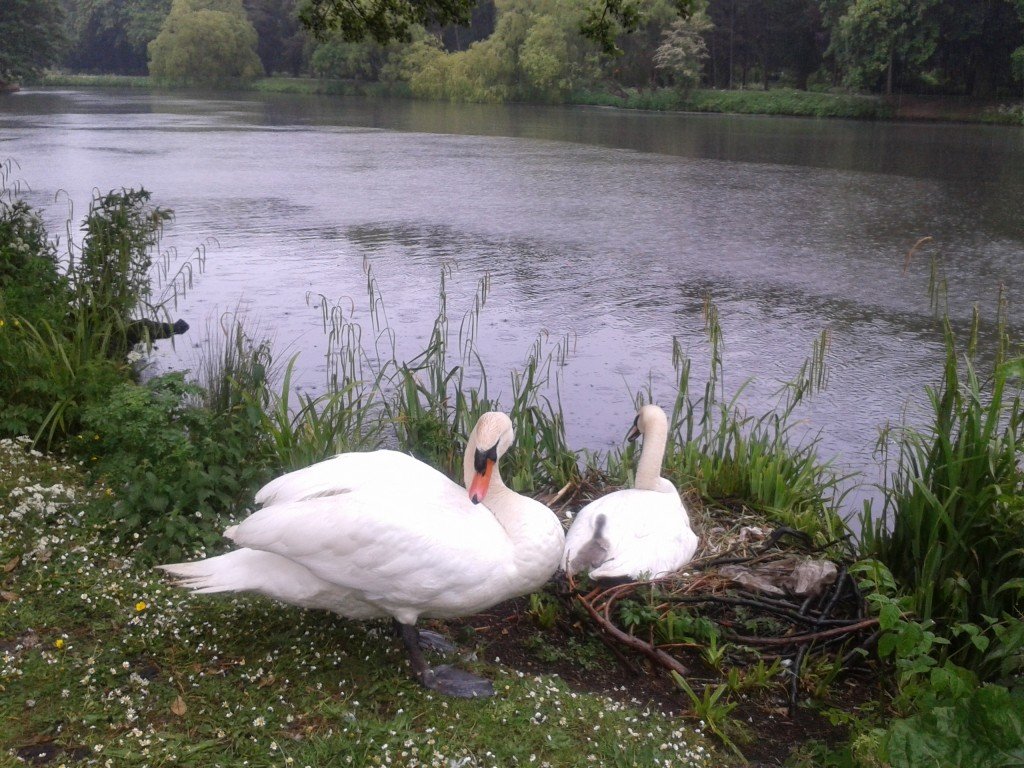 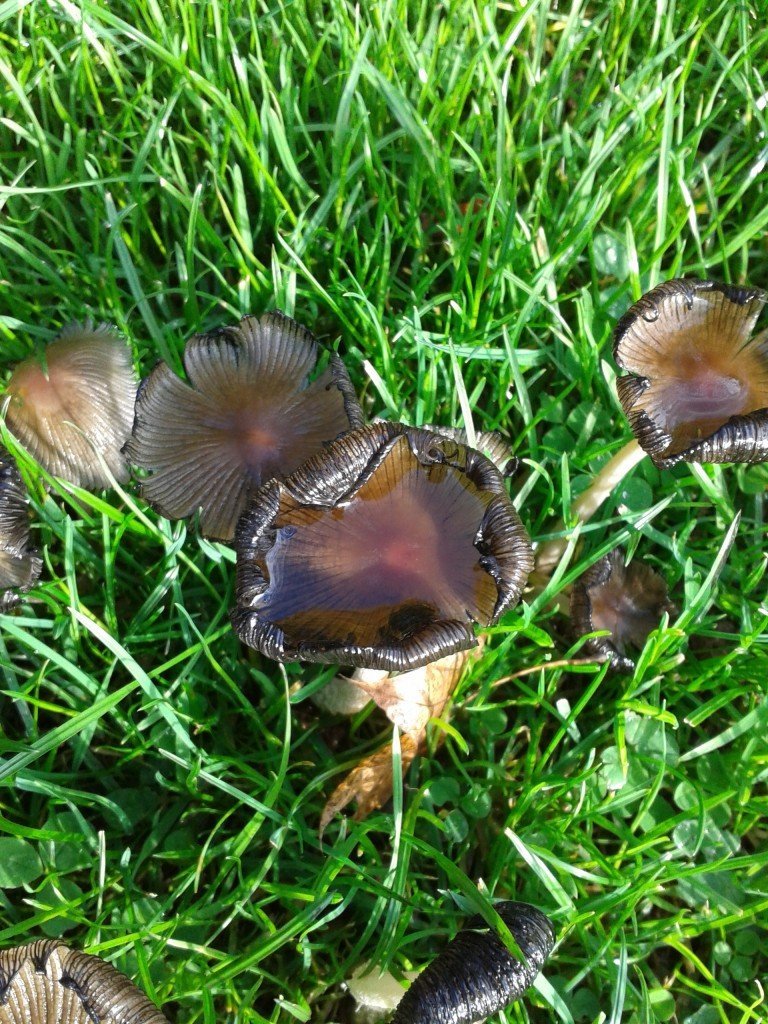 After just a year in Nottingham, we moved to Amsterdam and for the last few weeks I have been exploring my new home. Already the lake at my local park has become a favorite walk.

The walk starts at a bridge across a ditch where mallards fight for bread thrown in by groups of children and parents. There are also grey herons here, not lone herons, but long lines of them along the water’s edge (they turn up on lamp posts and rooftops too, and I’ve seen them flying past my apartment window). Despite how common they are here, I have started to recognise individual herons—I’ve become fond of a particularly old and shaggy-looking one that likes to keep to itself. The ditch stretches off to the left and right and is lined not only with herons but also trees and tall grass.

Often I find myself going for my walks in the late afternoon, as the sun is setting, partly because sometimes it takes the thought of missing the last of the day’s light to get me out of the apartment, but also because I like the quality of the light as it shines through the trees and burns up the tops of the tall grass with a silvery glow—an internal ghosting. As well as mallards and herons, there are the more exotic ring-necked parakeets that wind and corkscrew in vivid green across the sky.

Crossing the bridge and passing the distillery, I head along the shores of the lake, or Nieuwe Diep. I usually pause to watch the cormorants hanging their wings out to dry on the network of old wooden posts. Crows and jackdaws call out from the trees and hop along the grass. I watch them for the inquisitive way they seem to explore the world, heads tilted to one side. There are large groups of tufted ducks and a few coots, but otherwise the lake is relatively empty, on the surface at least. Still I keep my eyes open, always willing to believe that anything could turn up. 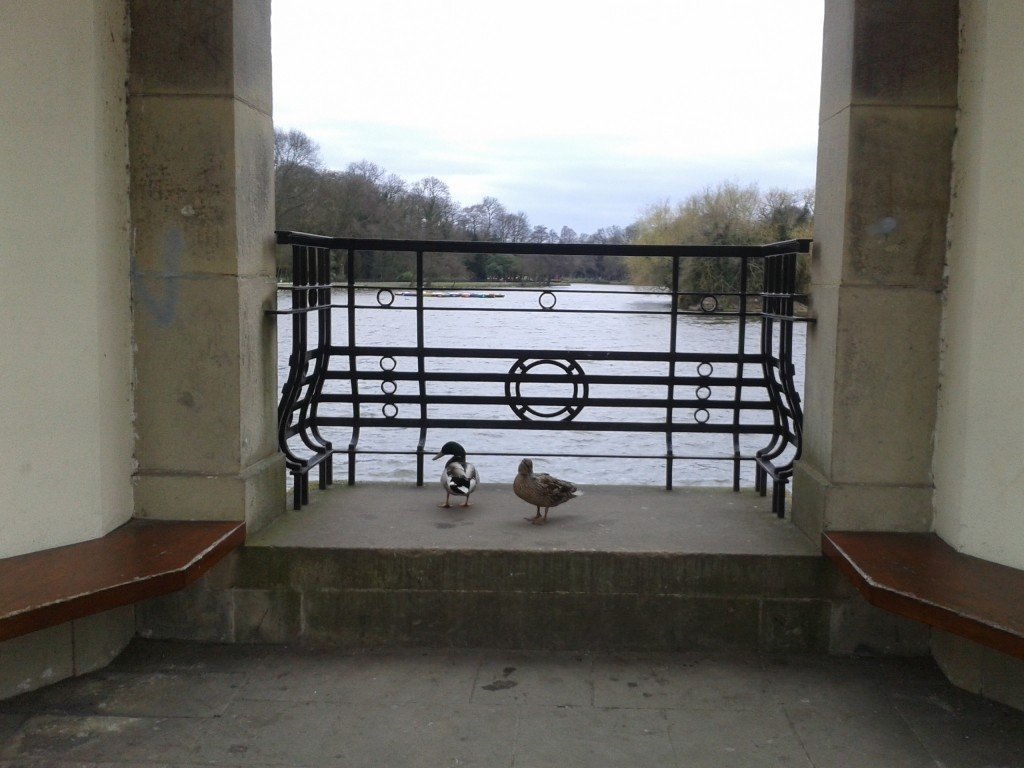 The wide canal that borders one side of the lake is never lifeless. Even on Christmas day, I saw large, flat barges making their way up and down it. The barges all have names like Sunrise, Calando, Adamento, and, my favorite to date, Aquapolis. There are dredgers out on the canal too. I once saw a burned out car that had been dredged up, every inch of it covered in mussels.

Beyond the dredgers, at the far end of the lake, there is a small collection of wooden houses and caravans, and in the garden of one of the houses there lives a goat. It sometimes comes running over and looks up at me expectantly, but I never have anything for it and I’m not sure what it would want. Finally, past the houses and caravans, I walk up along the other side of the lake, by a smaller canal and past the Jewish cemetery, where the broken headstones are crumbling amongst the tall grass.

In an article on “How to Be a Nature Writer,” Robert Macfarlane offers the advice, “Become a monomaniac. Study one thing—one species, one acre of ground, one river, one tree…” Mono (one), mania (obsession). An obsession with one thing. In a way, the city demands this of us. Despite the terms used to describe cities—sprawl comes to mind—they often draw us in on a much smaller scale. The weed growing through a crack in the pavement has become something of a cliché, but it does suggest an important point about nature in the city and our attachment to the cities we live in. A weed may be too transient a thing to attach a sense of place to—though I will always remember finding a tomato plant growing from the base of a wall along a busy street—but a tree or a lake isn’t.

As a child I knew one tree. I still know it now, still have a mental map of how to climb it. In Nottingham I learnt the lake. With a kind of obsessive devotion, I circumnavigated it. The lake was an anchor-hold in the city, a lesson in seeing what is really there (the thing that, as J.A. Baker reminds us, is often hardest to see). Now I find myself drawn to water once again. Gradually, bit by bit, patch by patch, I am walking my way into the place and each walk brings new surprises—familiar animals behaving in new ways, or birds I haven’t seen before. 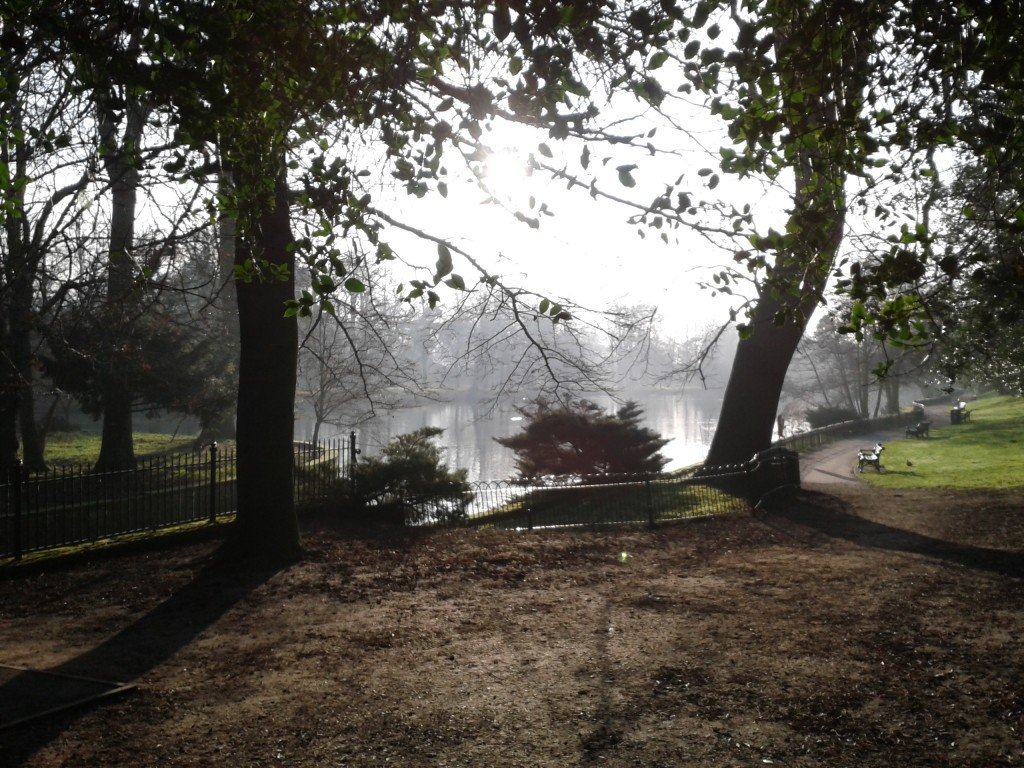 In truth, I still find myself longing for countryside, for time spent in a place beyond people and cars, however much I intellectualize the fact that there is no such place and that I would probably need a car to get there. I still have days when I look at the city around me and think—this is lesser, it is denuded, it isn’t as good somehow—but then I go down to the lake and I see the tall grass in the low winter sun, I spot a hawk circling above or count the tufted ducks on the lake. I take a moment to watch a heron landing on a low branch, its wings and legs not unlike a collection of smaller branches, and the heron watches me back. Even on grey, overcast days, when the paths are suddenly emptier, there is always something, some life animated by the wind—and all of this brings me home, all of this stays me.