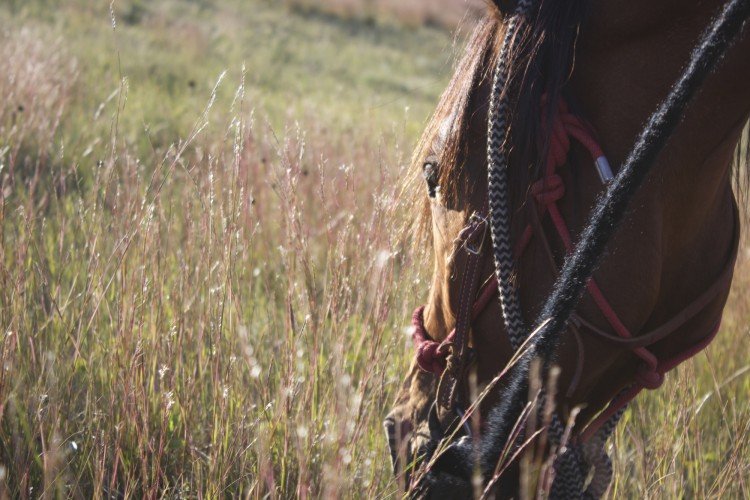 Fresh off the trail from a 3-month horseback expedition to document the changing Great Plains landscape, I drove from Sheridan, Wyoming, to Colorado Springs to visit my family. To go entirely across a state and into another in a matter of eight hours is a peculiar thing once you’ve taken about three months, or 2,016 hours, to do just that. Already it felt distinctly odd to be behind the wheel instead of in a saddle, to careen through a landscape in an enclosed vessel, cut off from the birdsong and wind. You don’t hear one cricket. You don’t meet one rancher. You hardly notice where the sun is in relation to the horizon. By the time I hit Denver, I was in a strange mood.

As I made my way into the outskirts of the city, through the suburbs and strip malls— that is to say, decidedly out of the native prairie that blankets so much of the country we had just become so intimately connected with—I had to pull over. Though it’s tempting to zone out while driving, to notice nothing except traffic signs, I couldn’t help but notice the red glint of little bluestem in small tufts in the right-of-way alongside C-470. 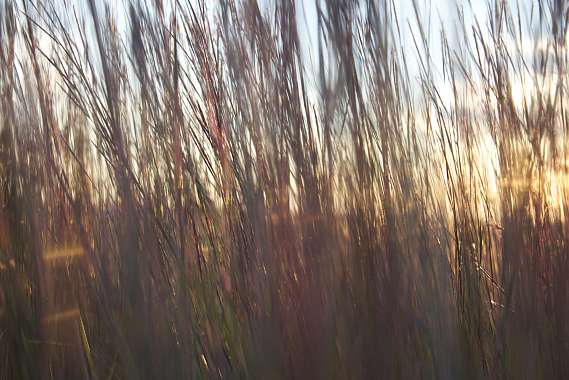 Lest we forget, the land along Colorado’s Front Range is part of the prairie. The soil, much of it now covered by cement, was once covered in little bluestem, prairie junegrass, and hundreds of other species of native plants. You would hardly make the connection, except for the small reminders, the remnants of prairie, that adorn the landscape. The scattered stands of little bluestem in the right-of-way, for example.

I don’t need to describe my drive for you—you’re familiar with the urban sprawl, the factories, the condominiums, the apartment buildings, the sidewalks and parking lots that dominate the landscape alongside any given highway near an urban center. Depending on where you are, you’ll often see fields of wheat or corn or soy or sugar beets or alfalfa. And then sometimes you’ll see open lots. Most of them have big signs with red letters that spell out “LAND FOR SALE.” What many might miss, while driving by at 80 mph, are the small stands of little bluestem right beneath these signs.

After spending every day of the previous three months marveling at the exact way little bluestem glints when the evening light lengthens across it, I couldn’t help but notice every single stand of little bluestem in the right-of-ways and in the vacant but soon to be developed lots alongside the highway. Every day on the trail I would be filled up and mesmerized by the delicacy of little bluestem seed heads in the wind during the half hour before the sun leaned into the horizon. During that half hour, my partner Sebastian would often get annoyed at me because I would jump off my horse and put myself belly down on the earth to try and capture the precise glean and glow of the grasses with my camera. I loved watching the horses bury their noses in big patches of it. 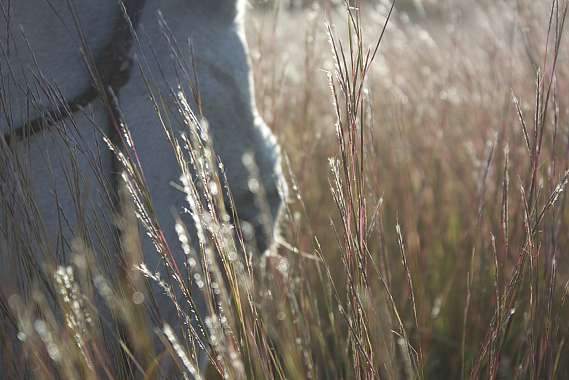 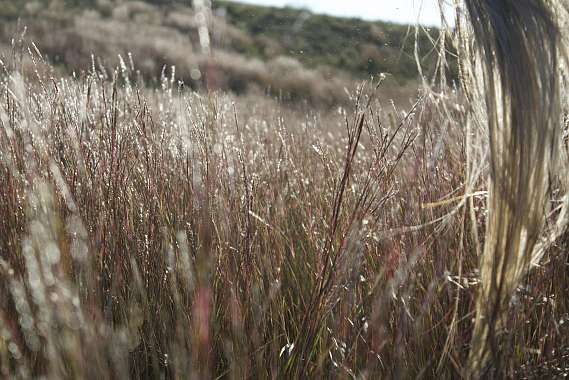 The thing is, when you are riding through the parts of the prairie that are still intact, you get the feeling that it is limitless. We were moving slowly enough across the landscape that the prairie seemed unending. The landscape is so immense, so vast, filled with such grandeur, that you believe it must stretch everywhere. It doesn’t. It is on the lip of disappearance, unsung and unnoticed, as more wheat goes in and more buildings go up. When you are riding through healthy prairie, when you are in the midst of the riot of its sounds and colors, it is difficult to imagine the edge of it, though half a day’s drive will bring you there. We talked with so many remarkable stewards of the prairie, had such heartfelt conversations about why it is important to them, that it seemed impossible there are parts of the country where the prairie is not appreciated; but, of course, there are.

The Rediscover the Prairie Project, an intitative I began with Sebastian Tsocanos in 2012, aims to celebrate the prairie and challenge the common narrative that describes the plains as “boring,” or “flat.” Not one mile of the landscape we traversed was boring. Little of it was flat.

In addition to celebrating the landscape and the people that care for it, the project aims to draw attention to the fact that little intact prairie remains. The huge swaths of native prairie we rode through, though they seemed boundless, are the small remainders of an ecosystem that has all but disappeared. The meadowlarks, the ferruginous hawks, the kangaroo mice, the Sprague’s Pipits, the little bluestem—the populations of all of these trademark prairie species have been greatly diminished. Their habitat has shrunk to stamp-size islands increasingly isolated from the next checkerboard piece of viable habitat. I wrote about what this might mean for grassland birds in another post here. 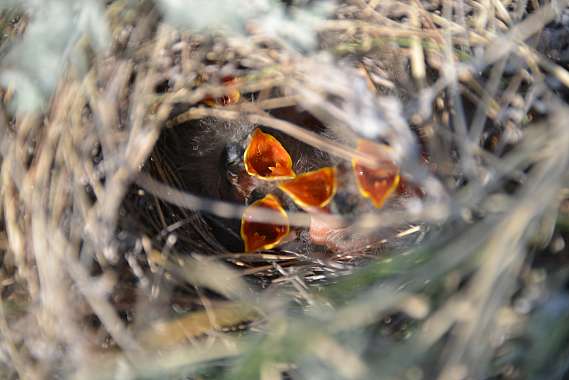 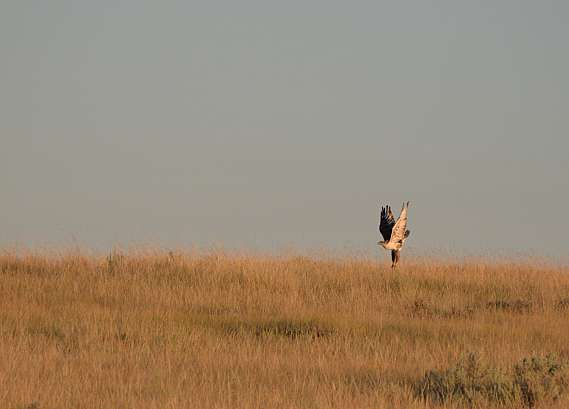 The loss of native prairie has made grasslands one of the most imperiled ecosystems in the world. The mixed grass biome we rode through has shrunk to 29% of its historical distribution. Estimates for remaining tallgrass prairie dip to fractions of 1%. The populations of 80% of grassland bird species are in decline. 74% of the species reliant on grassland habitats in the Northern Great Plains (an area that spans across MT, ND, WY, SD, NE and two Canadian provinces) are listed as imperiled by federal, state, and provincial governments.

The fact is that the country we rode across, much of it native prairie, is some of the last remaining intact prairie left on the planet. What appeared to be huge tracts of prairie while we were riding across them are really islands. They are shadows of what they once were.

Mixed into the soil of the Great Plains landscape are beauty, peril, promise, fear, rapture, and something all its own that transcends all of this. The long-term health and resilience of the prairie is not at all a given. The future presence of many of the species that now exist in its remnants is not certain. It may not even be probable.

Stories of individuals who cherish the prairie are woven into its grasses. Their efforts to protect it have had and will continue to have a resounding impact on the story that unfolds.

Even so, as I swung down from my horse on the last day of our ride, I knew that in the coming years when I return to visit the prairie we had just crossed, some of it will be gone. Native grasses will be turned under. Fewer birds will successfully nest in them.

Back from our ride, I wander around the city considering the present landscape. As I walk over the cracks in cement, I carry each dawn-lit morning in my step.

There is an openness about the prairie and its horizons that has been imprinted on me. When surrounded by its grasses, I let my thoughts expand over the landscape and move with the contours of the place, shift seamlessly between earth and sky. I carry this.

When you drink from the river and look up to see a doe deer wade across it, you are reminded of your connection to the world around you—of a shared need to slake thirst. Your awareness shifts away from the barriers between you and the natural world and you begin to lean into its pulse.

As I regain my footing in a world lit by the glow of iPhones and orchestrated by the sounds of traffic, I’ve noticed I have a proclivity to hold my breath.

When I spot the stands of little bluestem that thrive in the liminal spaces of the city, I am brought back to a learned openness. I change the cadence of my walk, and begin to notice the gradient of color in each blade of grass. I am reminded of the threads that bind these two worlds together.

I’m reminded that the life pulsing through our streets is not so different from the thrum of life housed in prairie grasses.

I am reminded of what we stand to gain when we begin to hunt out and name the things that surround us.

The lifelines in the city carry me to the memory of prairie. To little bluestem and Sprague’s pipits and kangaroo mice and ferruginous hawks and meadowlarks that do not want to be forgotten. 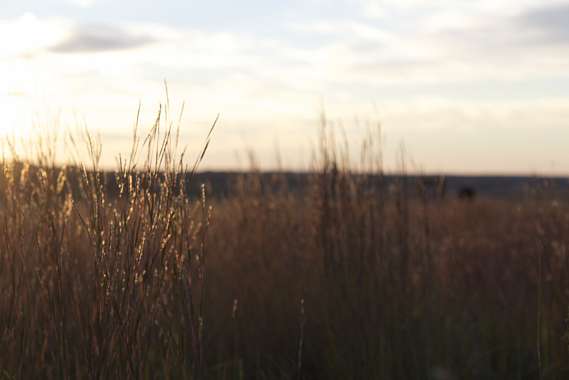