Editor’s Note: The following article, introduced by James Edward Mills, is a contribution by an outstanding student from the Greening Youth Foundation, whose voice enriches the ongoing conversation that is Minding Nature.

Working with the Greening Youth Foundation and the National Park Service was a transformative journey. The Historically Black Colleges and Universities Initiative internship program allowed me to travel to new places and be exposed to different modes of thinking. I had the chance to use the skills I acquired through this experience to fuel my aspirations to encourage change in communities no matter what my career path may be. Additionally, the Next 100 Coalition revived this spark within me to help grow and to elevate those around me.

The Next 100 Coalition is a collective of individuals from diverse backgrounds who have come together to promote diversity in public land management through education and workplace empowerment. Our internship concluded in a meeting with Sally Jewell, the U.S. Secretary of the Interior in Washington, DC. That encounter made me reflect on how important it is to build lasting bonds in this life and to help support others to achieve a shared goal. When we met in DC there was not only unity among members of the coalition and my fellow interns, but there was also a sense of cooperation and empathy among the Department of Interior staff. Secretary Jewell had a personal connection to some of those attending, but she also had a personal connection to the cause of environmental protection. I did not feel as if it was an “us vs. them” dynamic. We sat randomly placed at the same table to prevent the predominantly white staffers sitting on one side and the ethnic minorities on the other. After a few moments, I did not feel a sense of awkwardness or tension. Hearing others speak before me made it easier to share my ideas and my grievances. But I was able to discuss those things that I believe are working well at the National Park Service to improve diversity. The experience broke down communicative and emotional walls, so to speak, to allow for each side to voice its opinions.

It was very uplifting to be in such a supportive environment. Seeing people of color working in these fields and making changes helped me to identify my own aspirations. Being there, listening, and talking with the group, made things feel real in a sense. I could see myself in a few years, or even now to a smaller scale, fostering change in my own community.

The meeting was meant to highlight the huge elephant in the room, the Department of Interior’s lack of diversity. One of the causes of this problem is a complicated system of hiring for positions in federal employment. As it stands, white males hold supervisory positions, while people of color dominate the maintenance sector. This discrepancy of hierarchy is often discouraging for young Black, Asian, and Latino students who plan to pursue those supervisory positions but have few role models or mentors to encourage their success. As a person of color soon to graduate from college I found the statistics rather alarming. And after noticing the demographics, I saw that it was true. 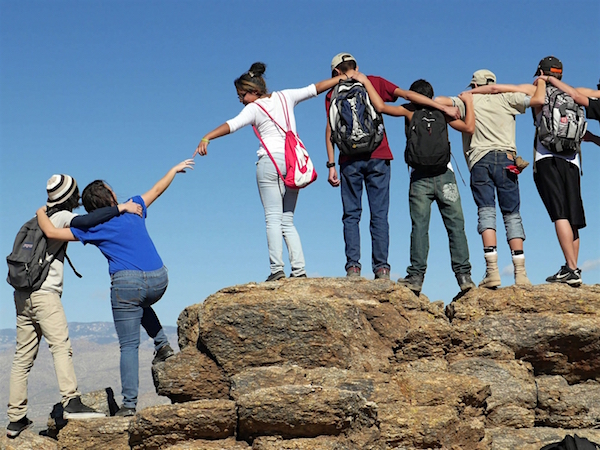 Another idea we discussed is the influence of culture on one’s career pursuits. There is often the misconception that people of color do not like nature, so they wouldn’t enjoy a career working in an outdoor-related field as a park ranger, for example, or a wildlife biologist. I argue that it has more to do with exposure. Many young people may not have grown up near parks or had access to schools and programs that encourage them to explore the fields of science or outdoor recreation. Many are denied the potential to pursue a career in forestry or historic preservation or even to become knowledgeable about the environment and its natural processes because they simply don’t know much about these topics. The time, emotional investment, and connection to conserving the land simply isn’t there.

To me, conservation is the balance between preserving resources and the environment, but is also about setting recreation areas aside for human enjoyment. I was told once that we often see the human world and nature in binary, mutually exclusive terms. But human beings are part of nature. We are just as much influenced by our surroundings as we directly impact the world in which we live. Viewing nature in terms that are personally inclusive and relevant to our everyday lives is the only way to be empathetic to the cause of environmental protection. Thus, the greatest issue that plagues wildlife and land conservation is apathy. To care about an issue, one needs to have some level of understanding of that issue. Additionally, how one views oneself in relation to the environment is also a factor. If a society views humans as the masters of their environment or as foreign actors whose behavior is unrelated to natural systems, it is unlikely that it will focus much of its energy on it. If this is the overarching reality, economic gain and personal interest will almost always supersede environmental preservation.

My experience with the Greening Youth Foundation has been a positive and transformative one. From the summer after my high school graduation through my final semester in college I have learned a lot about the relationship between humans and nature. My work as an intern this past summer with the National Park Service at the Kenilworth Park and Aquatic Gardens in Washington, DC, has inspired my academic decisions, aspirations, and future career plans. I feel that I have developed new passions and have become more independent. From observing my co-workers, I have learned that my career path is not fixed. I started off with medicine, then wildlife biology, and now I’m interested in environmental policy. And having worked with the Next 100 Coalition, I believe that I can have a seat at the table. Knowing that I now have the skills and a support system of mentors to help me achieve my goals, I feel liberated and ready to run with it.