…By Asking: But Where Will the Traffic Go?

Any road plan or design that threatens to yield anything less than the absolute maximum of traffic capacity immediately raises the challenge, often belligerently posed: “But…but…where will the  traffic go?” The presumptive answers are always disasters: the seldom seen but ever-lurking “gridlock,” twelve-mile backups, economic ruin, losing out to rival counties or states. To many, deliberately planning for constrained traffic capacity (i.e., less than the maximum physically or fiscally possible) and thereby accepting the possibility of more congestion is deliberately inviting “failure” and akin to inviting a public health menace by intentionally constraining sewer capacity, or causing the public safety hazard of an electrical blackout by constraining power generation.

In the real world, however, the traffic Armageddon predicted when traffic capacity is constrained never happens. Demand for traffic, unlike the demand for sewer capacity, is not a fixed per-capita quantity, but instead varies with the cost of travel, following the “demand curve” familiar from basic economics. As travel becomes more expensive (in terms of travel time, the only “cost” immediately felt by the driver on non-toll roads), we simply consume less of it. This shift, to less consumption of travel as free-flowing road capacity becomes less available, does not bring on the apocalyptic events typically predicted.

Drivers are smarter than this. One of the first adjustments to an increasing cost of travel (congestion, in other words) that drivers make is simply to reschedule some travel away from peak-hour work trip times, by far the most (and often the only) congested periods. Service and information industry employees, now the majority or of workers, are more than ever able to vary their office hours. Smart phones, wireless tablets, and employer-funded home Internet service all support flexible working hours, even where daily attendance at an office is required. Shifting travel out of the peak hour is also a great benefit to the traffic engineer. A vehicle trip shifted from a peak period to a non-peak time is better than adding the same amount of new capacity, since the existing road is being more intensively used at no additional cost. On toll roads, where an out-of-pocket dollar cost is added to the driver’s time “cost,” toll rates that vary with congestion (“congestion pricing”) add greatly to the driver’s incentive to shift travel to less congested periods. 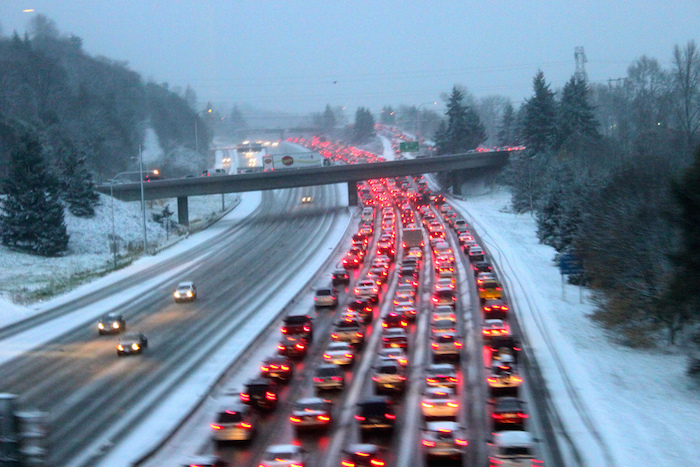 When capacity is constrained on a route, many regular peak-hour drivers become expert in finding better route options. Rather than simply dumping themselves from a congested route onto the nearest alternative route, as the “doomsday” view of traffic constraint warns, drivers in actual practice re-route themselves in an elaborate cascade of changes. While some drivers evading congestion on their former route may indeed simply choose the nearest available alternative, the network’s re-routing does not stop at this simple stage. Drivers on the route receiving new traffic do not simply ignore the new traffic and meekly sit in increased congestion, as is sometimes predicted. Rather, some of these drivers at the margin of choice between routes move to yet another alternative, and so on, yielding an elaborate chain of re-routing throughout the road network. The sophisticated “trip assignment” (routing) algorithm in the standard and widely used travel demand forecast model (“traffic model”) excels at simulating the millions of route decisions made daily by drivers throughout an urban area. This ability to trace the system-wide consequence of road capacities has unexpectedly made the traffic model a source of support for constrained capacity. Paradoxically, the same traffic models that are conventionally interpreted as telling us that we “need” more capacity because it will fill with new travel (the “build it and they will come” spiral) also tell us, on the other hand, that when we constrain capacity, the system will continue to function quite nicely, with drivers making decisions that, in the aggregate, diffuse traffic optimally through the network.

A most interesting and constructive response to congestion is change in patterns of origin and destination of travel. For decades, the trend in origin-destination patterns has been for origins (households) to disperse to suburban and exurban areas, with destinations (employment, shopping, personal business) following. Free-flowing roads, critical for linking dispersed origins and destinations within acceptable travel times, have been promised and largely delivered though transportation policies.

What follows a decision to reverse this policy of unfettered mobility and to instead constrain capacity? Instead of moving to increasingly distant suburbs, households are encouraged to locate in existing neighborhoods and inner-ring suburbs, possibly in fresh products like urban townhomes. Travel destinations—schools, shopping, personal services—are likely to stay in place.

Who, then, is being “victimized” when we constrain road capacity and deprive the public of a “needed” increment of capacity? Certainly not the core city and its inner-ring suburbs, which have a deep interest in homeowners staying in place and reinvesting in their neighborhoods. Not the existing businesses, which want their market to stay nearby. Nor is the school district victimized, since it is not interested in adding new capacity in one place while abandoning classrooms elsewhere. It is hard to find a “victim” of constraining road capacity. Perhaps the suburban tract-home development industry might suffer as road congestion degrades their product. But, on the other hand, doesn’t this homebuilder, with an adjustment in product and location, have every opportunity to compete in existing settled areas, where property values are increasing due to location?

Trip destinations (office employment, shopping, personal services) also react to congestion. Traffic planning that guarantees free-flowing high speed travel is a promise to the retail industry that even in low-density suburbs, a large area of employees and customers can be delivered to destinations within the travel times required for big-box retailing. The result: even larger retail big boxes, generating ever more vehicle miles of travel per transaction and, therefore, more vehicular capacity “need” on the roads.

What happens to retailing when the promise of free-flowing traffic recedes as congestion increases? Does retail abandon the area? Of course not. The industry is far more agile than that. What they will do is illustrated by some aggressive grocery chains that are adding neighborhood-sized stores (25,000 square feet or so) scaled to the smaller market areas yielded by slower traffic. Where the promise of unending increases in traffic capacity is withdrawn, franchisers reduce territory and population requirements for new locations, yielding more locations with smaller and more convenient market areas. Some retailers, previously operating only in the closed environment of shopping malls, make the leap to “open air” environments of main streets, downtowns, and neighborhood centers.

It is no longer surprising to most of us that the intended consequences—less cost and delay—of trying to eliminate congestion quickly give way to the unintended negative consequences of drivers going not just faster but farther, with travel origins and destinations dispersing into the sprawl now enveloping our cities. It is still surprising, however, to discover that the unintended consequences of doing just the opposite—deliberately constraining road capacity and accepting congestion—can be positive.

Image credit: The I-5 Parking Lot at 4:30 pm by Oran Viriyincy courtesy of Flickr. 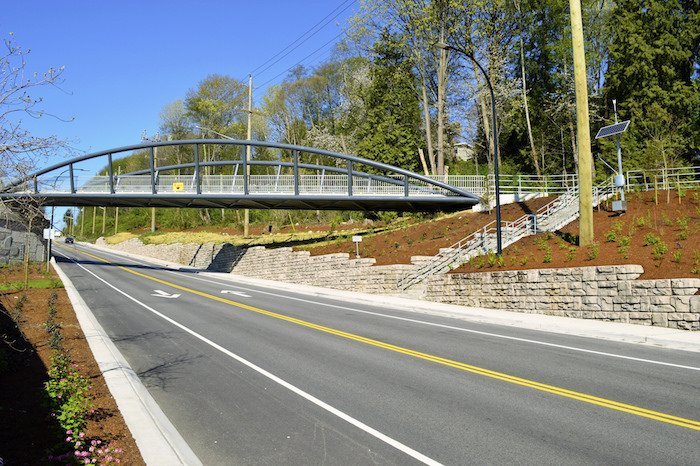