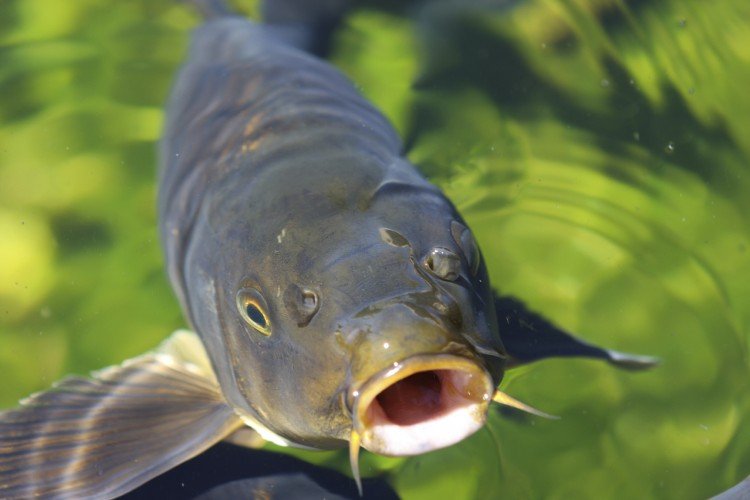 I was anxious as summer ended last year. I spent much of the season fishing in various remote places, and the suburban area in central Michigan where I live the rest of the year felt more than subpar in comparison. Honestly, when I arrived back home in early August I did not know how I was going to survive the three weeks that remained before the busy work and school schedule began, let alone the rest of the year. This happens to me most summers—as it does, I imagine, to anyone who feels more at home in the wild than in any type of city. This summer’s end, however, was particularly bad. So bad that I resigned to, well, carp fishing.

Carp fishing is not something I ever aspired to as an angler. For one, like a lot of people, I do not eat carp: think mucky tasting; for another, carp tend to live in areas that may not be considered prime fishing territory: think muck. When I mentioned to my two daughters, who typically love to fish, that I was writing an essay on carp fishing they both simultaneously said out loud exactly what I was feeling inside: “Eeeewwwww.”

I realize that this is not an educated naturalist’s response. A real naturalist would find something to appreciate about the species, perhaps the beauty of the common carp’s (Cyprinus carpio) golden and black-lined symmetrical scales, or the ecological role that grass carp (Ctenopharyngodon idella) play by eating aquatic plants. But I’m just not there. I hate to admit it, but carp are really hard for me to like. 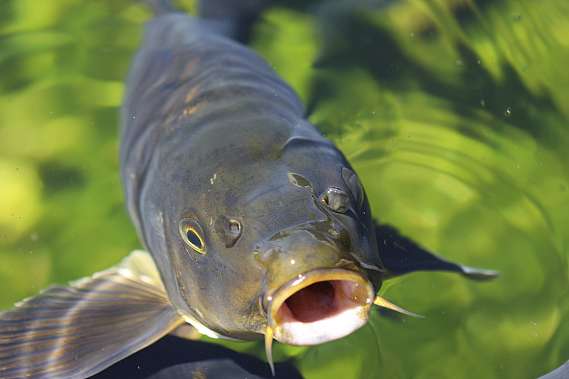 Perhaps if I became an expert carp angler, learning the fish’s habits and sensibilities, I would appreciate them more. A recent book-turned-instructional-video, Carp on the Fly, tried to convince me of this noble cause. Carp, the video says, exhibit all the elements of the game species that many fly fishers covet: they fight like bass, are wily like trout, and run like bonefish. Added benefit, states the video: fly fishing for carp will dramatically improve your overall presentation, stealth, and rod-handling skills. And carp are everywhere! Which means you can fish for them in your suburban ponds and urban rivers!

Our subdivision’s lagoon contains a ton of carp. We once had a neighbor friend who was obsessed with fishing for them. He made recipe after recipe of gourmet bread-ball bait, until he finally found the perfect concoction and landed a nearly fifteen-pound monster. My three children would follow him around and around the lagoon as he lobbed out the balls on his spin-casting rod. But he moved away before he managed to convert us, and we stuck to fishing out of our canoe for blue gill and large mouth bass.

Our neighbor’s enthusiasm did not go completely unrewarded, however. This past summer, something kicked in and my eight-year-old son decided he really wanted to catch a carp. The kind of carp fishing he had in mind, make no mistake, had nothing to do with fly fishing or even making fancy bread balls. The method he envisioned would more accurately called carp trapping, or at least some hybrid of fishing and trapping. We witnessed a version of this method on my uncle’s pond, which is how I think my son first got the idea, since I never saw anyone try it on our lagoon. But he was sufficiently determined, and I was sufficiently antsy, so we got to work. 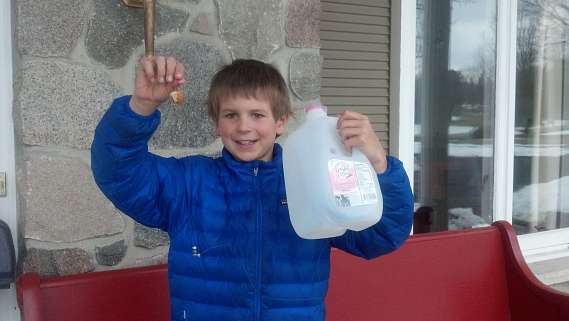 A carp trap is simple: 1) get something that floats, such as a balloon or milk jug (we used a milk jug; floats better and more environmentally friendly); 2) tie a few feet of monofilament to floating object; 3) tie a hook to the end of the mono and squeeze on a couple of split-shot weights a foot ahead of the hook; 4) put anything edible on the hook (we squished a piece of hotdog bun on ours); 5) set it off to drift. When you see the big, floating milk jug move speedily and haphazardly on top of the water, you know that you have hooked a fish. Wade or canoe, depending on the water depth, to fetch and pull up the float, and then hope that a carp is on the end of your line.

This method proved quite successful for us. So successful that within a couple of days we had all manner of carp trap-making materials strewn over the front porch, ready to assemble and let loose on the lagoon at any given moment. At one point we were working four or five traps at a time. Chasing down all of these bobbing milk jugs in a silver aluminum canoe of course drew the attention of some of the neighbor kids, forcing us to begin labeling the milk jugs with my son’s name in black Super Sharpie marker, for fear that our improvised floats would be stolen or mixed up with others if our enthusiastic neighbors decided to set their own.

All of this was terrific: the inventiveness, the experience of local nature, the sense of accomplishment. But there was a major problem: We couldn’t eat the fish. Not with a clean conscience. The lagoon is heavily polluted, filled to the gills with nitrates from farm and lawn run-off and E. coli from the (seemingly) millions of geese that frequent it all summer. This poses a troubling question for ethical anglers: In an age of pollution, in which it is often unhealthy to eat fish caught from local waters, should one still fish?

Add to this quandary that I have always been uneasy with the idea of catch-and-release fishing. Sure, if rivers are fragile and over-pressured and species are threatened and rare, catch-and-release may occasionally make sense. But I have difficulty shaking the sense that catch-and-release treats fishing like a joy ride, inflicting pain on another creature in the process.

Any serious angler will admit that she fishes, in part, because it is pleasurable. Pure and simple—there is nothing I would rather do than stand in a river or sit in a boat with rod (or trap) in hand. Beyond the enjoyment of being outdoors, I am learning to be an animal. And it feels good. It makes me feel alive and aware and part of a reality larger than myself, and if I am lucky it gives me something to eat. But that’s precisely the point. I fish because it fulfills intrinsic emotional and physical needs that I have as a human animal. Emphasizing one dimension (emotional) to the detriment of another (physical) is unbalanced, perhaps even maladaptive.

So if catch-and-release fishing is preferable because of health concerns, what benefits does the fishing experience offer? Perhaps the best response to this question comes from watching children who are learning to fish, for it is here that we most plainly see the necessary components of the formation of what Aldo Leopold called the ecological conscience. Childhood experiences of nature form our affective landscape, the map, if you will, that guides the further development of our environmental values into adulthood.  This is not to say that environmental attitudes and behaviors cannot be formed in adulthood—people can always change their minds and actions—rather, children offer really good clues for how our most deeply held values are activated and fostered.

Many points could be made related to the distinctiveness and significance of fishing for fostering positive ecological values within children. It can help children gain a sense of mastery and pride in learning a hands-on skill, and not just any skill, but a fairly challenging and intricate one. It can also help children develop ecological understandings related to a pond, lake, ocean or river system and its wildlife, insects, and plants. Over time, the practice of angling can help foster moral character within children—patience, courage, perseverance, humility, and grace, for instance, may be developed through the difficult arts of learning to perfect the cast (or trap-building), laying out the line smoothly, tying on and presenting tiny flies or lures or bait (in just the right spot) to oftentimes finicky fish, landing and netting a fish, and perhaps even learning to tie flies or make lures on their own. 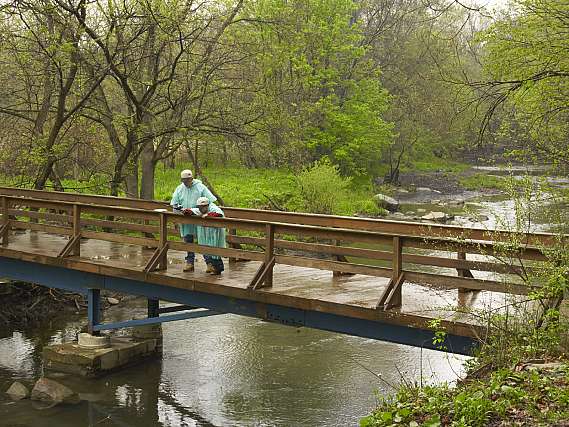 Each of these activities requires a fairly high level of assistance, instruction, and encouragement by an involved adult, “a companion in fishing wonder” to adapt Rachel Carson’s famous phrase. This adds to angling’s uniqueness as an outdoor activity. Even mastering the basic task of wading in chest boots or paddling a canoe or dropping a line off a bridge or dock demands, at least at first, a good amount of adult supervision.

Yet beyond these dimensions of craft and physical challenge, the experience of fishing has the capacity to foster deeper spiritual and moral values within children. This point is immensely important to me, for in today’s technologically oriented culture there appear to be fewer and fewer practices where children might and actually do become integrally connected with the natural worlds in which they find themselves.

In this modern milieu, practical arts like fishing have become rare jewels. There is not only an extinction of experience in relation to the natural world among children today, as Robert Michael Pyle has put it, but an extinction of particular types of experiences, especially those that connect children practically and spiritually to the whole life-death-life process, including its consumptive aspects. Fishing, like canoe and pack travel, as Leopold pointed out, is one of those primitive arts that still makes sense for children to learn today: practically it gives them a useful skill for human survival (eating); spiritually it provides an act that can create deep meaning and fulfillment (happiness).

Catch-and-release fishing, including carp trapping, is a compromise. On the one hand, survival is not a factor (although Asian carp burgers made from grinding the whole fish, bones and all, are apparently becoming a delicacy in some Chicago food circles). On the other hand, catch-and-release fishing may provide children with the types of experience that are necessary for the formation of deep emotional connections to the natural world. These emotional connections are critical precursors to the development of environmental values over time, the kind of environmental values that can lead to questions about why local waters are polluted to begin with, and what can be done about it.

Perhaps we could see carp-traps, and catch-and-release fishing in polluted waters more generally, as mini-conductors for the sparking of a child’s ecological conscience. Not ideal, but necessary and sufficient. Sort of like carp. 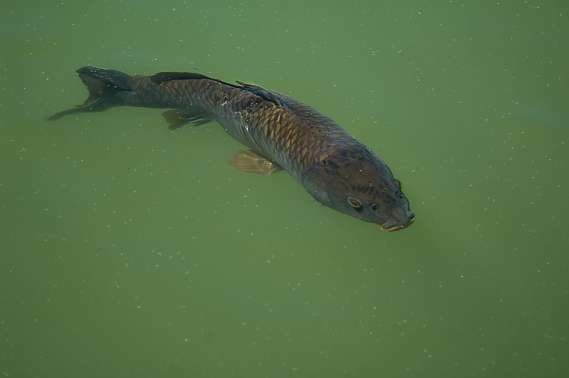 *Photo credits: Second photograph from top taken by Gretel Van Wieren; all other photographs from istock.com.