Never More Than a Cedar Waxwing

If I said I live on ten acres in a nearly 100,000-acre area known here as the “Agricultural Reserve,” where might you imagine that is? Could such a place be twenty minutes from a movie theater or cafe? Yes, in fact the Reserve is essentially just steps beyond the swath of Washington, DC’s, urban/suburban landscapes. Humans in the Reserve are a community of both city mice and country mice, so to speak. And I think the same can be said for the wild creatures who live in the Reserve and who travel the geographic corridors of rapidly changing and humanized landscapes, whether those corridors are through green forests, alongside brown rivers, or above black highways. 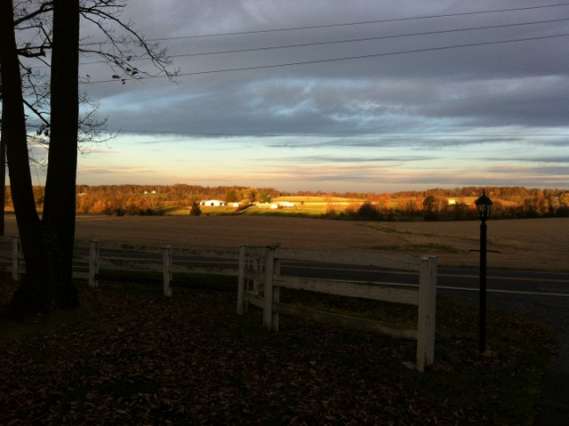 The cedar waxwing is such a bird, content to live in the orchards of the Reserve or in the nearby suburban backyards and parks. As is the merlin who hunts the waxwing. And last summer both species—if you look at online data for sightings—were prevalent in the Reserve and even more numerous in suburbs and city parks. This is important to know only insofar as I later tried to understand what was happening when, as I was driving one afternoon, I came upon two smallish birds in the center of a rustic road in the Reserve. One bird was prone, obviously hit by a passing car, and the other was standing next to it. As I slowed, my car clearly in sight, the bird standing vigil did not leave the side of the other until I opened my door and walked toward them. I am not a birder and had never before seen a cedar waxwing—with its pale-lemon-yellow belly, tawny body, black mask, and waxy red tips on its wing feathers. I also had never seen a dead bird so closely attended by, quite obviously, its mate. 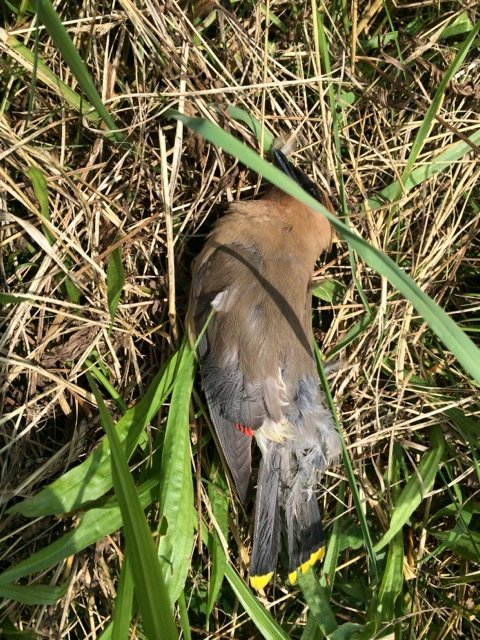 With the mate watching my every move from its perch on the telephone wire above, I carried the dead bird to the field and placed it in the long grasses several feet in from the edge of the road. Before I got to my car, the mate dove straight down from the telephone line to arrive next to—I am going to say it, now—next to its beloved. Because not only am I not a birder, I am not a scientist, and thus feel no allegiance to a certain language to describe the fact that for at least six hours—until dark that night, when I could no longer witness these two birds—the surviving bird stayed beside its fallen friend in the field.

Did I stay there for six straight hours? No. At first I stayed for a half hour. Then I drove home. Then I drove back out a couple hours later to fetch my child from an event. The bird was still hopping around beside its dead companion. Then I drove home again. Bird was still there. I fed my horses and cleaned the barn. As dusk approached, I left again, for what I cannot now remember, but, still, the bird was there. I knew then, as I saw him/her fluttering in the grass, standing and waiting by the dead body, that this was the last time I would witness in this particular bird . . . what? Devotion? Sadness? Loss? Surely the night’s foxes would make a meal of the body hidden in the grass. 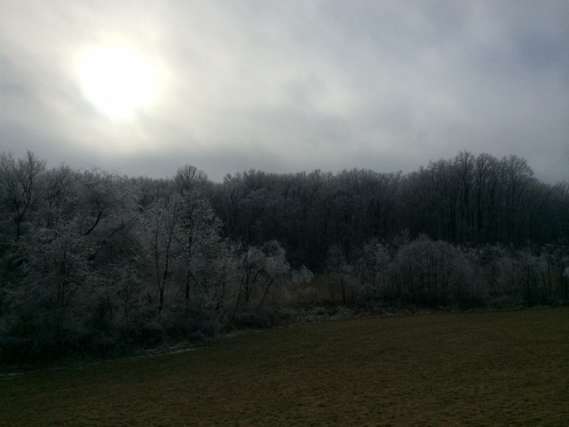 Where does the merlin come in? I did not see a merlin that day, but I’ve noticed them along that very same road. Small kings they are, waiting in the thrones of their trees above fields for, perhaps, cedar waxwings to fly by. Was the mate attempting to wake up its partner to save it from a merlin? How do we explain, if we need to, what happened that afternoon? What compels an investigation into emotion vs. instinct? Many corvids—crows, scrub jays, magpies, and ravens—are known to gather around their dead. Might also a cedar waxwing? Given these questions, I fell under the spell of empathy and poetry as a means of knowing, sin or not that that is, to guide my attempt to understand faithfulness and relationship outside of the human world.

Never More Than a Cedar Waxwing

My eggs were never more special

than those of a cedar waxwing’s.

And surely hers were more

and so of course more beautiful

in a nest of woven grasses lined

with rootlets, cotton or yarn

Her eggs in her orchard home,

mine alone in my cave.

My love was never more special

than that of a cedar waxwing’s.

Though surely hers was more

necessary, after all, since he flew

with her amid the flocks

to breeding sites through their years,

and helped her build her nests,

and brought her sugary berries.

My loss was never more special

than that of a cedar waxwing’s.

Though surely hers was more

sudden when he flew into a car

and fell where I found him in the road.

She waited beside him in the sun

until I lifted his body to the field,

where for hours she stood by him

in the grasses they’d used to build

their home, resolute in the belief

he would awaken and return to her.

~ by Lisa Couturier, from her chapbook Animals/Bodies, published by Finishing Line Press, Dec. 2014