Celebrating a Centennial in the Dunes 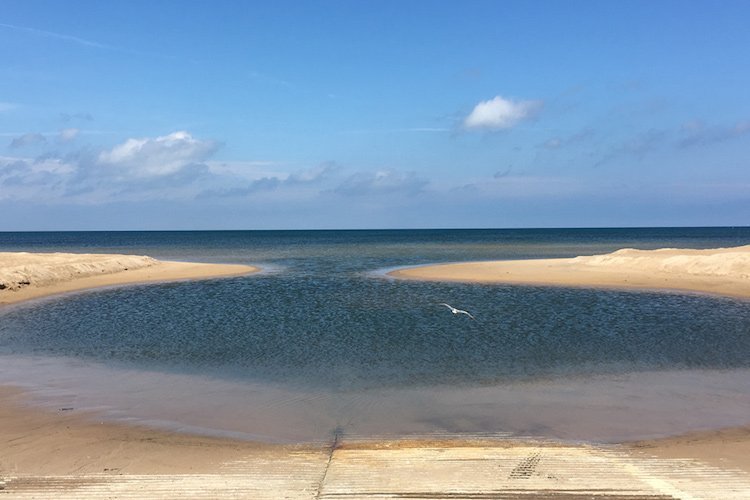 Where are all the people? I had to wonder. Here I am, I thought, an hour from the Chicago Loop. It is the centennial anniversary of the National Park Service. I’m in a national park in the midst of the third largest metropolitan region in the country. The lake is so calm the horizon appears solid as a polished granite countertop. Soft sand sifts between my toes. And I have it all to myself.

I am amazed and saddened in equal measures by this observation. It is the first of many contradictions I would sense in this extraordinary place.

I came to honor “America’s best idea.”1 The National Park Service was officially created on August 25, 1916. Excitement about the centennial has been building all year. My current experience notwithstanding, visits to national parks all over the country have seen a surge due to all the attention. A capstone commemorative event is to be held today, August 25, 2016, at Yellowstone, the nation’s first park. 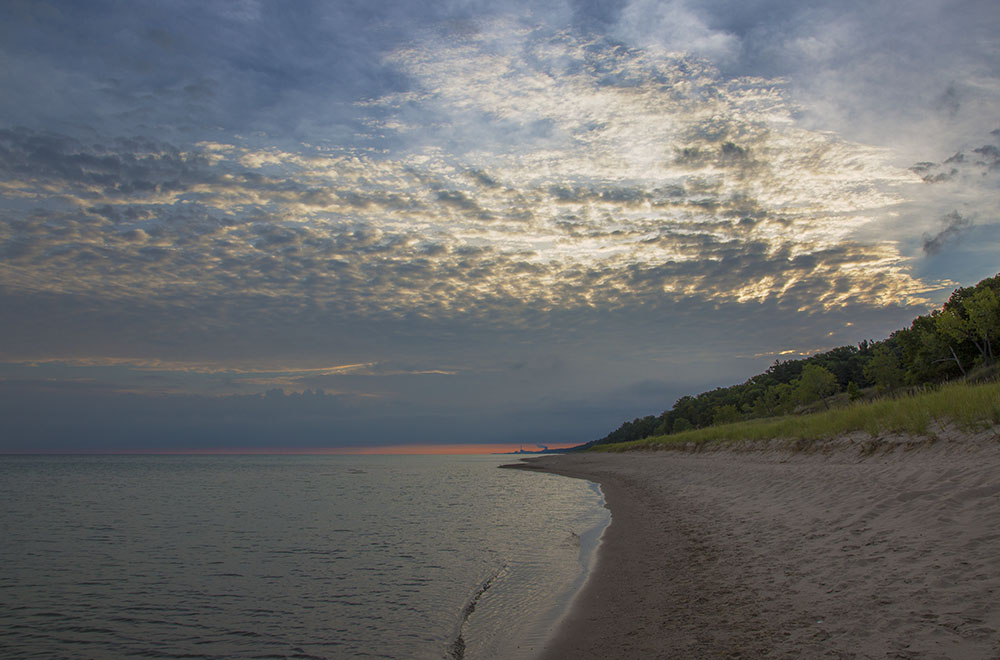 I couldn’t easily get to Wyoming so I mark the occasion by visiting a much more local national park. While there are two national parks in Wisconsin, they are in the far northwest corner of the state.2 The closest to Milwaukee, where I live, is here at the Indiana Dunes National Lakeshore, some 150 miles away. I set out in the early hours of the morning to try to catch the sunrise—and also to avoid rush hour in Chicago.

I’d planned the trip on impulse, booked a hotel near the park for a night. But I didn’t think to check the weather before I left. I make it to the beach on time, but the sky isn’t in a celebratory mood. A bank of clouds rolls in and I find myself walking in the rain. No matter. The foliage glistens and the color is so intense I feel like I’m bathing in viridian. The light drizzle seldom breaks through the forest canopy.

Yes, there are forests at the Dunes. Although the predominant feature of the park is the eponymous shore of Lake Michigan, with beaches and sandy dunes that reach as high as 126 feet, the terrain behind the beachfront is surprisingly varied. Park literature touts its forests, marshes, ponds, bogs, rivers, oak savannas, and even remnant patches of prairie.

The idea that so many distinct habitats can be found in such close proximity might sound like the overactive imagining of a national lakeshore marketing team. Until you take a close look at a large map. The fat thumb of Lake Michigan pokes straight into one of the most complex ecosystems on the continent. The Great Lakes watershed at the southern edge of the northern boreal forest intersects at this point with two other major continental ecosystems, the eastern temperate deciduous forest and the vast prairies of the Great Plains. I am a bit dumbfounded when I read that the Indiana Dunes “has the third highest plant diversity of any national park.”3

Diversity is clearly evident, beyond varieties of vegetation, as I drive between Gary and Michigan City on the roughly 25-mile stretch of Route 12 known as the “Dunes Parkway.” Heavily used commuter and freight rail lines parallel the road. Small communities and large factories interrupt the woodlands, wetlands, and prairies. The eastern tip of the park is punctuated by the cooling tower of a coal-fired power plant that looms over Mount Baldy, the tallest dune.

In contrast to 1916, when parks often were carved from a seemingly limitless landscape, in 2016 many of them have become protected islands engulfed by oceans of development and private enterprise. Indiana Dunes National Lakeshore is an extreme example of this phenomenon. It is an archipelago of disconnected public lands of varying size intermingled so inextricably with private properties, both residential and heavy industrial, that it’s hard to predict when you’re going to see a house in the woods or a steel mill around the bend. 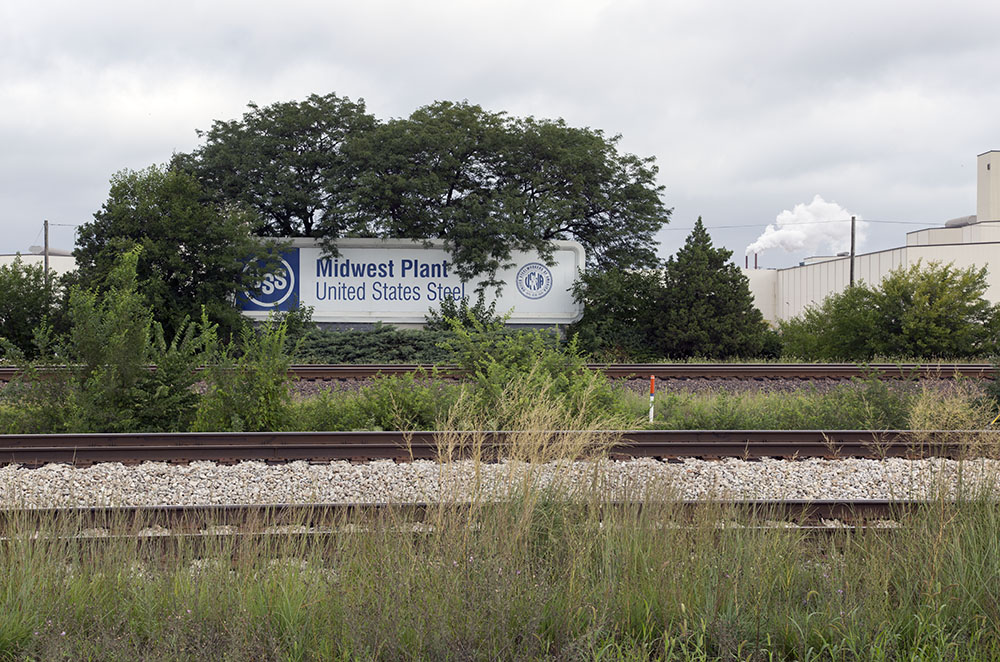 In fact, it was a steel company that enabled the creation of the park in the first place. By the early twentieth century, much of the shore lands—including Gary, Indiana, and the south side of Chicago—had already been developed for industrial use. On one of my hikes overlooking the lake, I stop to read one of the many helpful interpretive signs. Most explain natural features or historical changes in the evolving landscape. This one reveals the compromise that is at the heart of the park, that established its intimate relationship with its urban, industrial surroundings.

There had long been efforts to preserve some of this unique and important ecosystem. But it was the desire of the steel industry for a new port that finally made it possible. In exchange for permission to develop a port, Congress passed legislation in 1966 that established the first 56 acres of park. Since then it has grown to 15,000 acres.

The clouds break up and drift away near evening, leaving behind clear, crisp air and a vivid sun setting over the pale, miniature Chicago skyline. I find myself, for once, among a crowd on a short stretch of beach in the newest addition to the park. Dunes studded with spiky grass rise abruptly from the strand. Young poplars stand beyond, where the undulating dunes resemble those in other parts of the park. There is no clue, except for another interpretive sign, that this lovely place has been reclaimed from an industrial landfill.

No clue, that is, until I glance across the Burns Waterway and see the immense wall of a U.S. Steel plant, which stretches away to a distant vanishing point. The elaborate and well-used Riverwalk has been erected beside the newly vegetated slope of the reclaimed parkland. Along its entire length, the implacable wall glares ferociously in the brilliant light of the setting sun.

One of the central paradoxes of this place is endemic to the entire national park system. The signs are unavoidable—intentionally so. I’ve seen them nearly everywhere in the park but they are particularly prevalent here at the Portage Lakefront beach where their message is reinforced with ropes and fences. They read either “Keep off Dunes” or “Area Closed” due to “Emergency Conditions.” The emergency usually is the damage done by the very people for whom the park exists, the public. 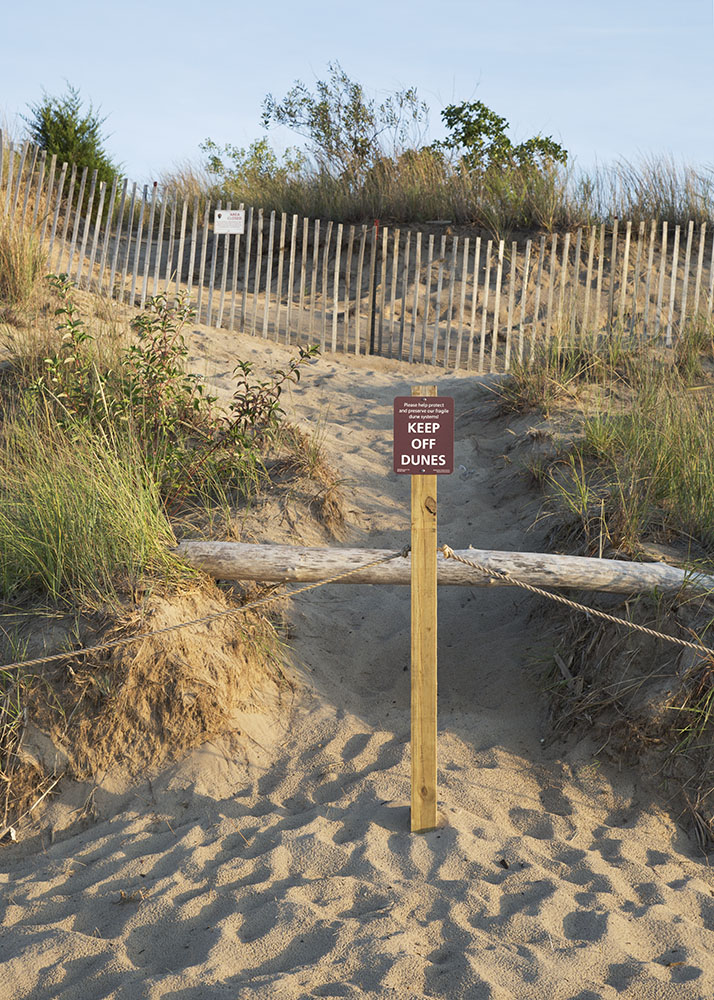 Trying to untangle “unimpaired” from “enjoyment” is kind of like walking in a swamp without expecting to get wet. Balancing preservation of natural habitats (not to mention wilderness) with the needs and desires of the visiting public has been a conundrum for at least a hundred years.5 The issue is particularly stark here at the Dunes. People come here to enjoy the sand. They want to climb dunes. But sand is notoriously unstable and the dunes are among the most fragile of ecosystems. And so the struggle continues, as it must.

The wind has shifted. An onshore breeze kicks up light surf. The horizon has softened. Someone is swimming about 50 yards from shore. Only his head is visible above the surface. So small.

The sun sets without fanfare. The opalescent sky dims moment by moment. Faintly at first, lights become visible. Some of them are stars.

As a national park the Dunes are marvelous, strange, challenging, and, perfectly suited to this place: full of odd juxtapositions, ironies, and contradictions  You can’t ignore human impact here. The visibility and odor of nearby industry won’t allow you to pretend, as you can in some parks, that humans aren’t mixed up in the damage, restoration, and preservation of what remains.

The writer Wallace Stegner put it this way: “National parks are the best idea we ever had. Absolutely American, absolutely democratic, they reflect us at our best rather than our worst.” I believe it. That’s why I came. Happy birthday, National Park Service. Here’s to the next 100 years. 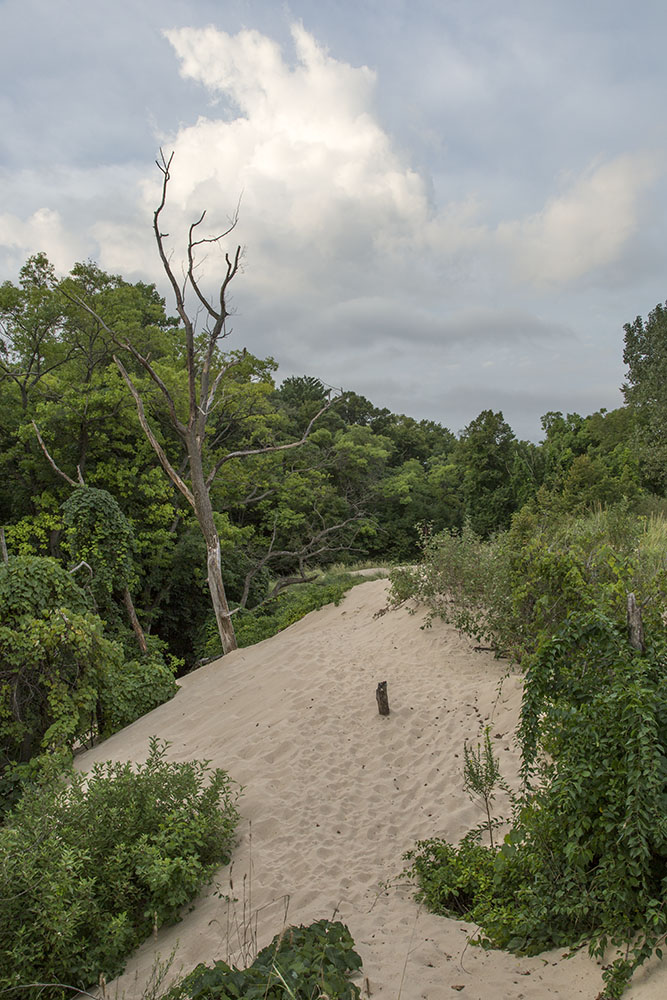 All photographs by Eddee Daniel. To see more images from the Dunes go to Eddee Daniel’s Flickr album.

3. Explore the Millennium Reserve and Greater Calumet Region: A Natural and Cultural Guide to the Region from Bronzeville to the Indiana Dunes, second edition, p. 13.

5. Yellowstone, the first national park, was established in 1872.