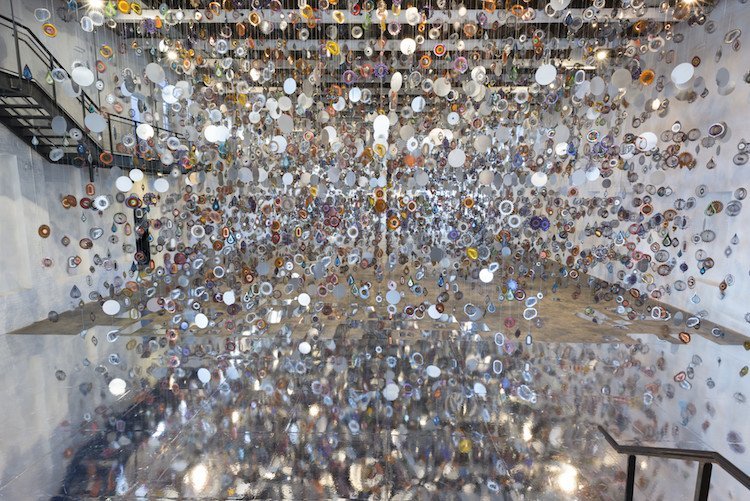 We’ll never know what the Red-tailed Hawk was thinking as it crashed through the window at the Massachusetts Museum of Contemporary Art (MASS MoCA), in North Adams. Was she enticed by the reflection of a tree or cloud? Perhaps she mistook a leather shoe for a choice piece of meat. Whatever the hawk’s reasons, her arrival in the gallery was marked by a blast that sounded like gunfire, followed by shattered glass, fear, and confusion.

In the air, Red-tailed Hawks are magnificent birds. They soar along thermals—broad-winged, athletic and graceful, substantial yet ethereal. I have seen these hawks float over the Connecticut River near my home and ride updrafts blowing over the Holyoke Range. I have watched them on my way to the bakery and the elementary school where I used to pick up my children, black silhouettes sliding across limitless azure. Red-tailed Hawks are a frequent sight here in Western Massachusetts, as they are across the United States. These adaptable raptors will take up residence almost anywhere, from scrubland to rain forest, even an old mill town like North Adams.

At the moment the hawk arrived in the football-field size, two-story gallery, visual artist Nick Cave (not to be mistaken with the highly regarded Australian musician Nick Cave) and MASS MoCA’s installation crew were beginning to fill it with 16,000 wind spinners, millions of plastic pony beads, thousands of ceramic birds, fruits, and animals, twenty-four chandeliers, seventeen cast-iron lawn jockeys, thirteen gilded pigs, more than ten miles of crystal, and one life-sized crocodile.The show, titled Until, is Cave’s newest and largest exhibit, now on display at MASS MoCA.

The hawk hit the glass at the perfect angle and velocity to make a hole while the rest of the fragile pane remained intact. The window now hangs on a wall on the second floor of the exhibit. Amid all the exquisite frenzy of Until, this rectangle, with its wooden frame covered in peeling white paint, nearly four feet high by three feet wide and divided into four panes—the second pane from the top now scarred—lingers in my imagination. 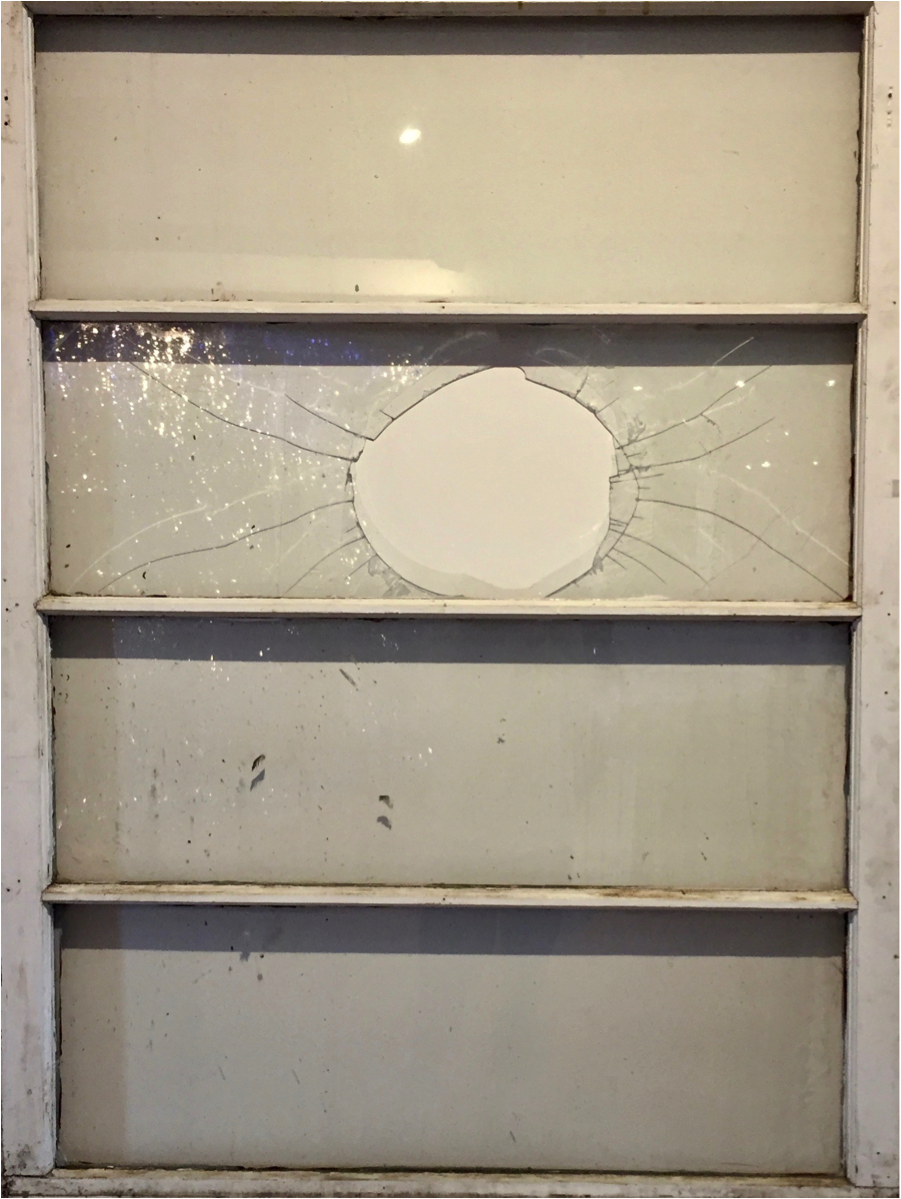 Red-tailed Hawks have been called messengers from the spirit world. Cave sees himself as a messenger, too, channeling art to confront community pain and suffering. Until was born of collisions, like the one between Cave, who is a professor at the School of the Art Institute of Chicago, and several policemen. After teaching a class, as Cave was walking home with his portfolio in hand, these men surrounded him and ordered him to lie facedown on the ground. A convenience store down the street had been robbed. By default, Cave’s race made him a suspect.

Cave, who was born in Fulton, Missouri, recalls that when he was a boy his mother warned him that he needed a thick skin to navigate our treacherous world. After the 1993 verdict related to the beating of Rodney King, Cave responded by fashioning his first Soundsuit, a full body sculpture made from twigs that he collected in a park. This symbolic “suit of armor” was meant to conceal identity, along with any hint of race, gender or class. It also rustled as Cave moved, which made him contemplate how we protest injustice—how we need to be loud to be heard and to make a difference. Today, the Soundsuits that Cave constructs are made of a range of materials that he finds compelling, from buttons to dyed synthetic hair. When dancers animate these second skins, Cave hopes that the audience will rethink their assumptions about his reclaimed objects and imagine alternatives to how we exist in the world.

Twenty-five years after Rodney King’s beating, the deaths of Michael Brown, Eric Garner, and Trayvon Martin prompted Cave to again respond through his art and Until was born. Until interrogates the judicial premise “innocent until proven guilty” through a series of installations that challenge perceptions of this fundamental human right. He exploits viewers’ senses and memories, daring us to reconsider who is guilty and why by rethinking the meaning of objects that we take for granted. A pastiche of color, shape, and texture becomes an interactive space, where artists and community groups can grapple with controversies concerning gun control, race, class, and gender inequality. 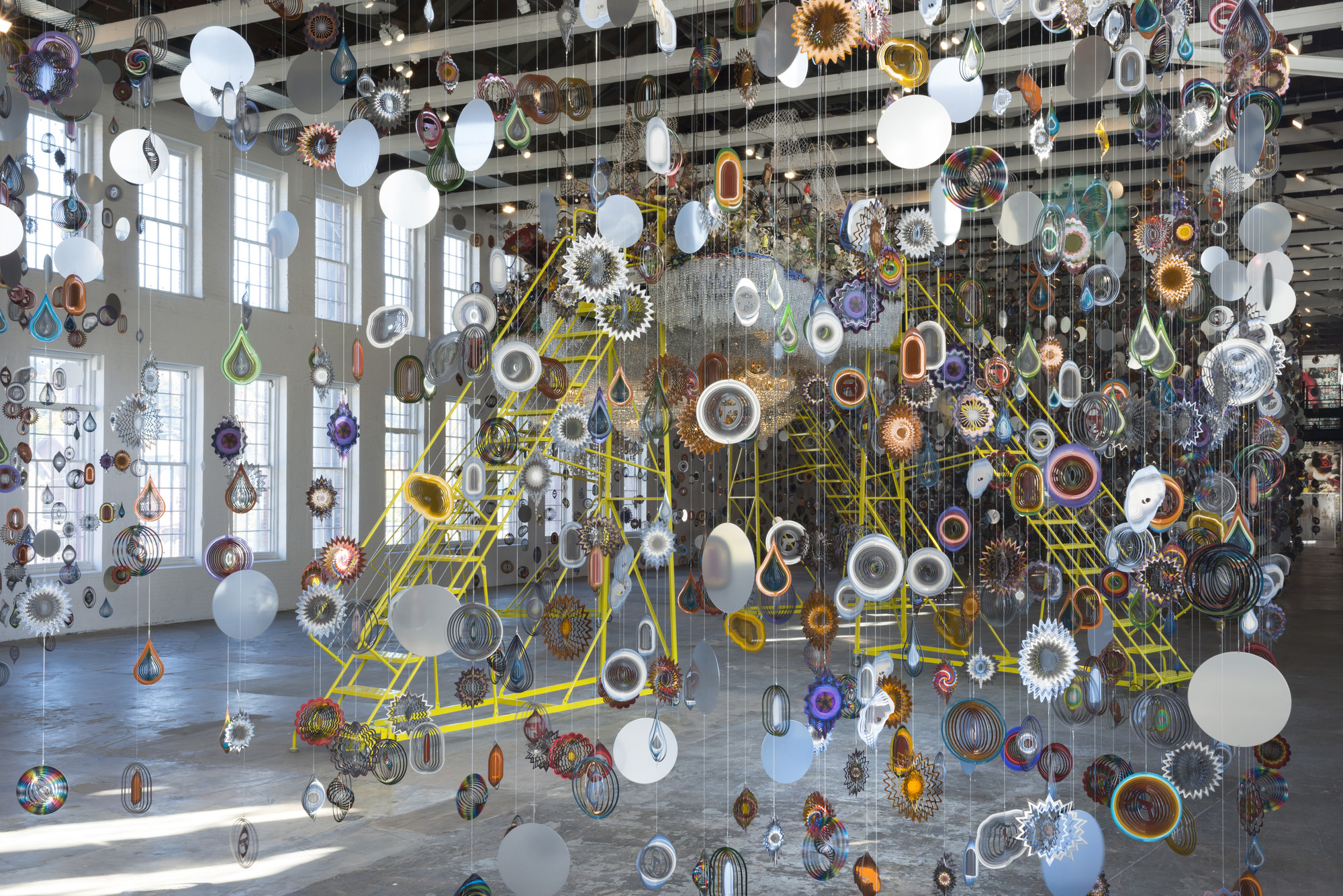 When I visited Until, I entered through a pair of glass doors into a vast forest of spiraling wind spinners, stretching two stories from ceiling to mirrored floor.

“Oh…” I said, louder than I meant to. The guard, who was standing at the entrance, looked at me and smiled.

“I’ve been hearing that all day,” he said.

I wandered into a thicket of shapes resembling starbursts, flowers, ringed planets, raindrops and suns, delighted by the spinning metal that shifted through a rainbow of colors. Then I saw the shape of a gun revolving right in front of my face. Beyond it was another gun, and beyond that, more guns, scattered throughout the spinners, along with targets and bullets. The fairytale charm of the exhibit turned grim; the raindrops became teardrops. Violence permeated the psychedelic splendor—a reminder, says Cave, that brutality “is in our backyard… On one hand it’s about this fantastical dream state… but then at the same time you are bombarded with the sense of burden as you walk through the opening of the show.” 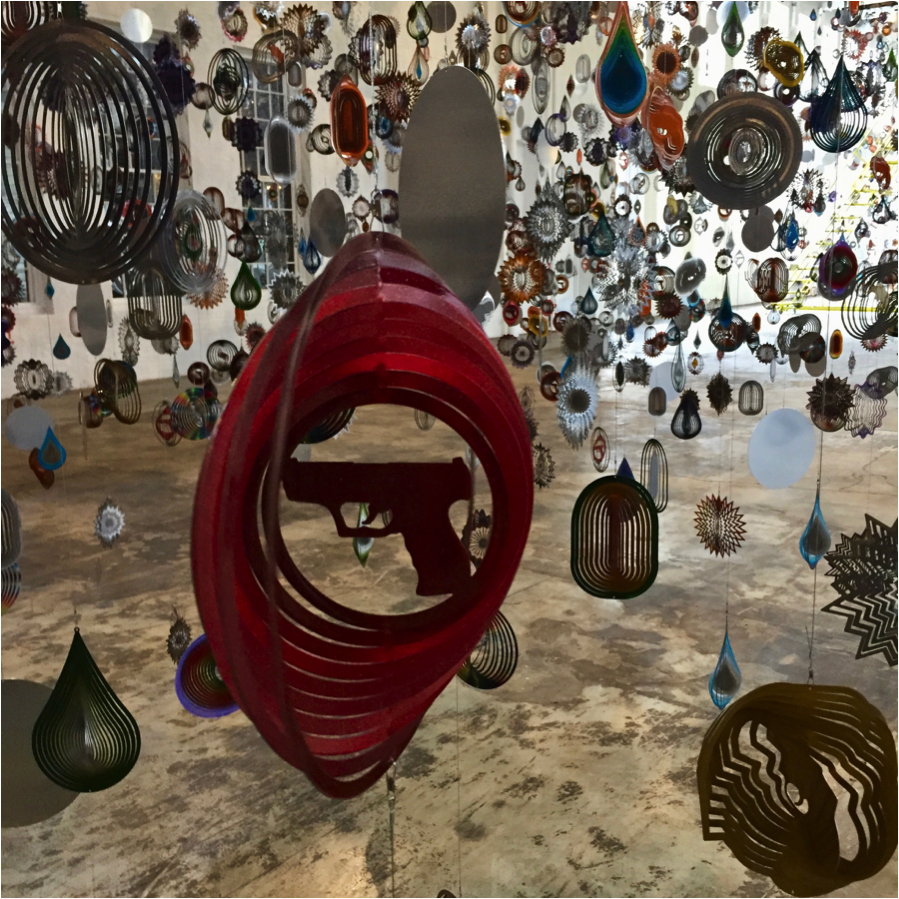 This tension between beauty and burden extends to the whole exhibit. Just beyond the thicket of wind spinners, a cloud rises eighteen feet above the ground. Its underbelly is a mass of crystal chandeliers worthy of any gilded age ballroom. I hate heights, but I didn’t want to miss the view, so I climbed a yellow ladder to the top, arms shaking, hands gripping the rails. Perched at the pinnacle, my stomach revolted, but the crowded tumult of multicolored tinsel trees, ceramic birds, and metal flowers—intermingled with marbles, small round mirrors, and giant butterflies—was worth all the worry. A lawn jockey stood amid this riot of objects. He held a dream catcher, crafted from an old racquetball racket, high above his head. In this setting, the lawn jockey, a racist heirloom, was transformed into a spiritual guide who gathered the best of our imaginations while deflecting evil. I wish that all change were so simple. 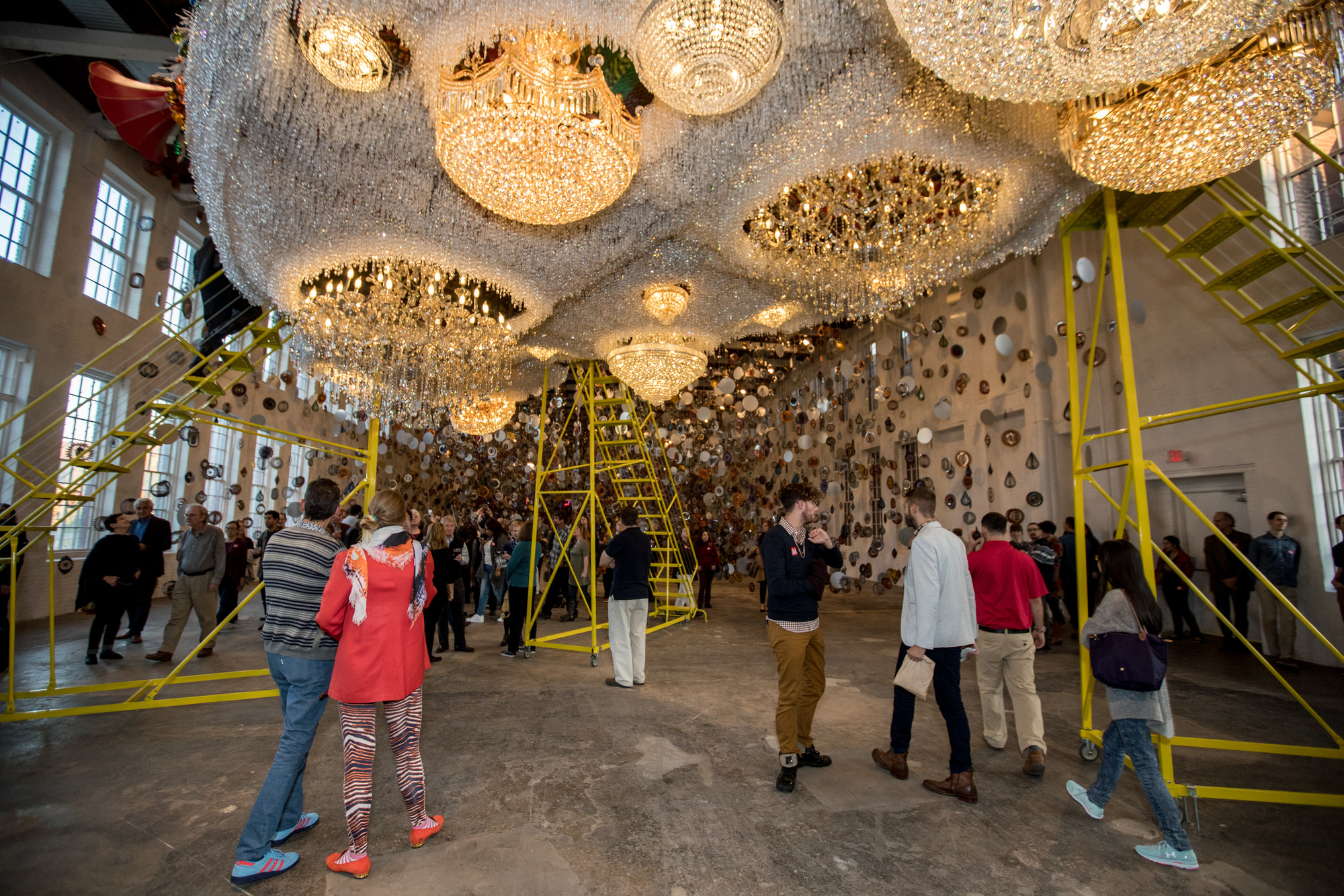 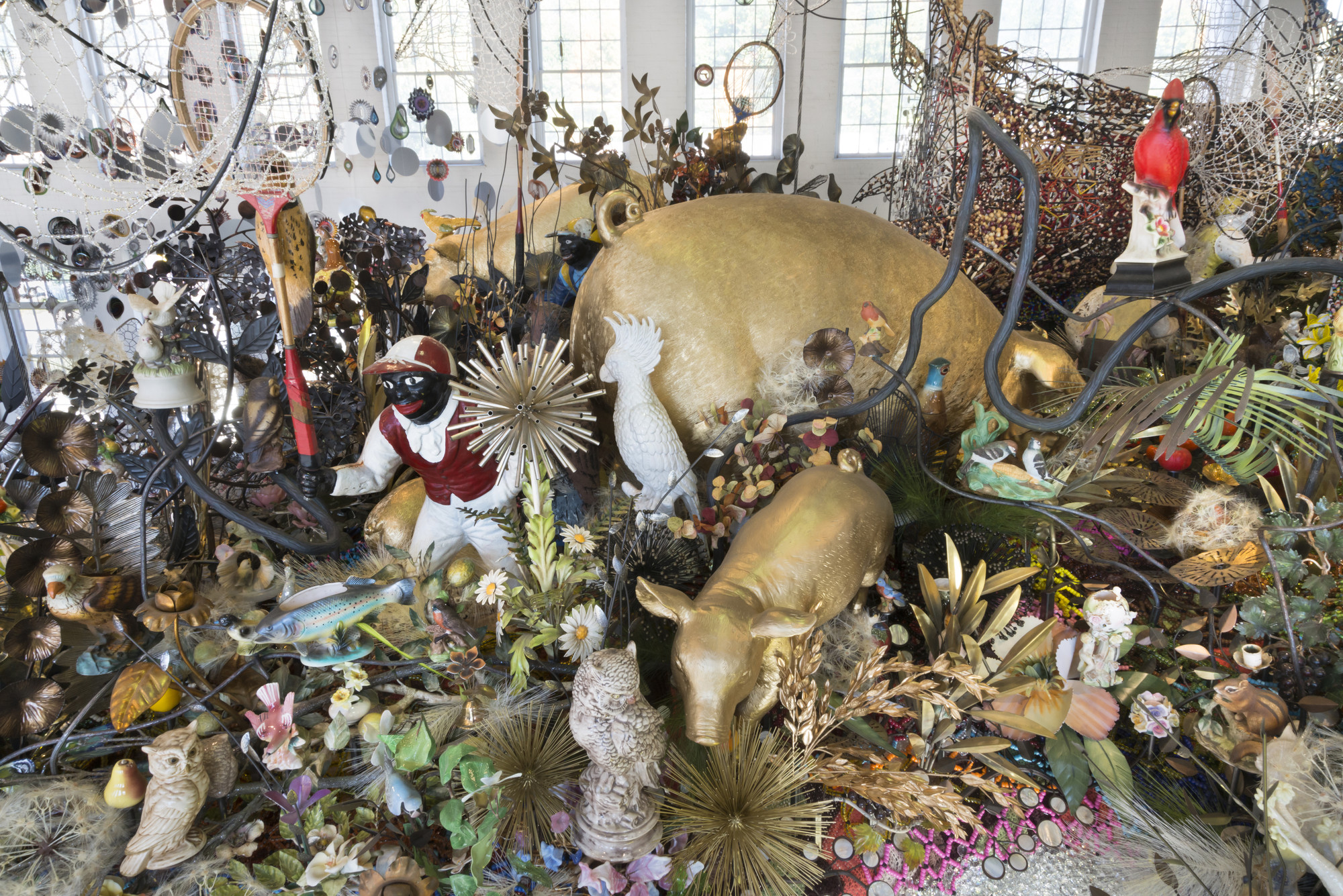 I descended the steep ladder backwards, thankful to be grounded for a stroll through a series of floor-to-ceiling “cliffs” made of plastic pony beads and woven with graffiti: rainbows, peace signs, the word “power,” pink triangles, and African symbols of courage and truth. My serenity was short lived. The next part of the exhibit, a grotto of stunning multimedia angst, began with a photograph of a giant eye—Cave’s eye—staring at me, like a hawk marking its meal. Inside the room, a video looped on all four walls of Cave dancing in a yellow, raffia Soundsuit, head crowned with a chicken mask. “He is the proverbial ‘chicken with its head cut off,’ agitated and thrashing around the room,” says MASS MoCA curator Denise Markonish. Waves of water projected across the floor, but there was nobody in the lifeguard stand to save me if I were drowning. Life felt precarious in this space.

I found some relief in a stairwell illuminated by a small rainbow projected on the wall. I thought of the ephemeral quality of the colors; how rainbows can vanish in an instant. Yet this one didn’t waver. We can bend light; we can catch dreams; we can forge grace. 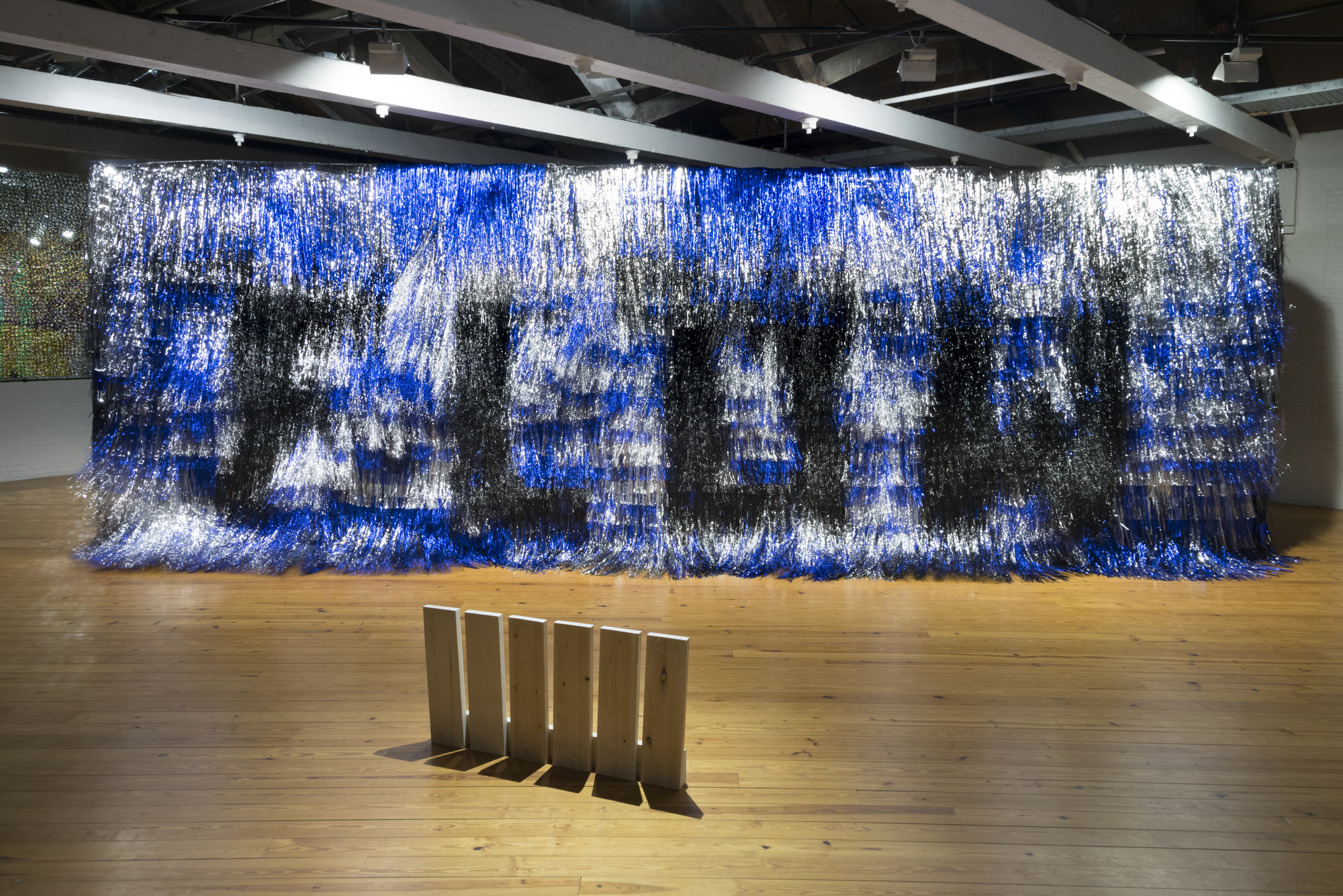 An open door led to a ten-foot-high by thirty-two-foot-wide wall of blue, silver, and black Mylar strips, blowing in the wind of industrial fans. I felt small next to this metaphorical waterfall, which was designed, says Markonish, “as if the piece washes us clean from the agitation taking place below” on the first floor of the exhibit.* The plain white-framed window, with a hole in one of the panes, hangs just beyond these healing waters.

When I think about the exhibit, I keep returning to this window in my mind, to the facts of physics that allowed the hawk to break so many molecular bonds without destroying the window itself. Was this collision an act of the divine or just dumb luck? Is it coincidence that it was a Red-tailed Hawk, a ubiquitous bird that is cunning, creative, and ruthless? A bird that mates for life, makes fine nests from twigs and sticks, tenderly nurtures its chicks, and is a deft hunter who waits for the perfect moment to strike before killing prey that may never be aware of the threat.

People are also caring, cunning, and creative, but we slay for status, sport, and vengeance, as well as sustenance. Cave knows this. Until features the collision between art and human complexity. It is a call to refrain from fighting and find love amid life’s bric-a-brac. Perhaps then, the hawk’s arrival was a christening, not a crash, a blessing of our effort to overcome our failings.

We’ll never know what the hawk was thinking. Sometime after everyone left the gallery for the day, the bird disappeared, vanishing through an open door. 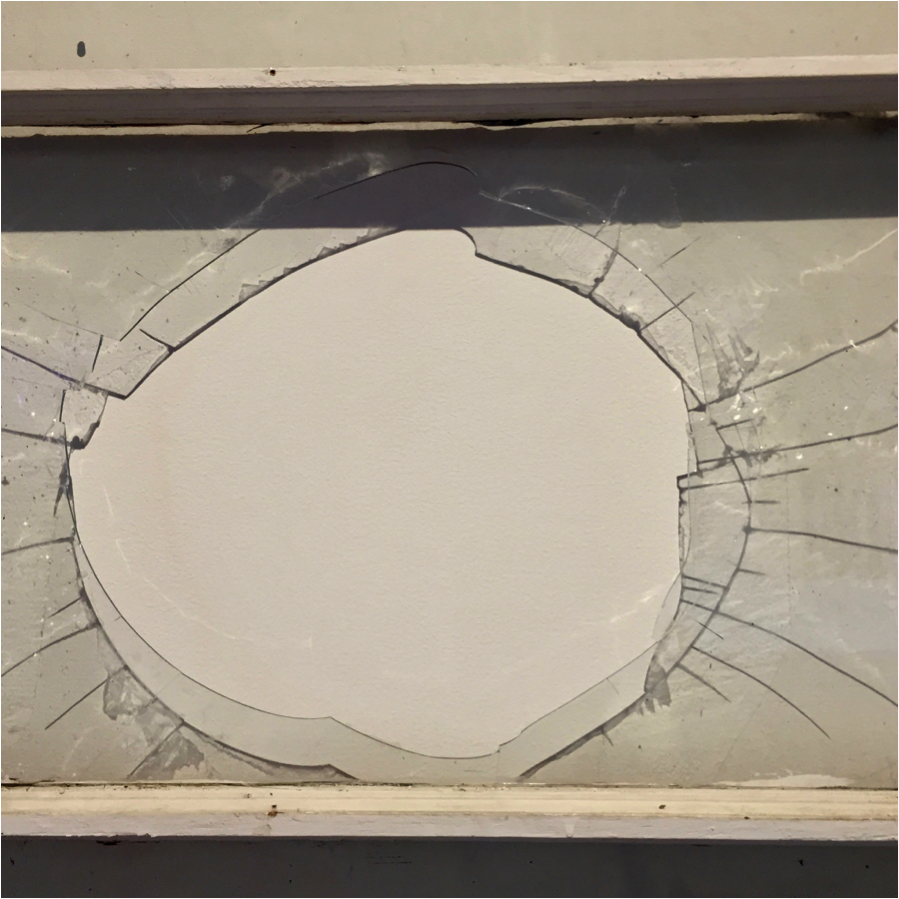 *All quotes from Markonish in this peice are taken from: Markonish, Denise, “After the Fire, Right Hand Must Win” in Nick Cave: Until, edited by Denise Markonish with contributions from David Byrne, Carl Hancock Rux, Lori E. Lightfoot,Claudia Rankine, and Nick Cave (Munich, Germany: Prestel, 2017).