For those at work in the world of endangered species conservation, the Internet delivers a daily download of encouraging and gloomy reports from the front lines. Among the recent dispatches: Last December, biologists successfully released fourteen juvenile Whooping Cranes into the marshes of Louisiana’s White Lake Wetlands Conservation Area.[1] In January, a crane that had been released in the same area a year earlier was illegally shot and had to be euthanized.[2] Late last year, Angalifu, a forty-four-year-old Northern White Rhinoceros, died at the San Diego Zoo leaving only five of his kind, and just one aging female, alive in the world.[3] (Suni, one of only two remaining breeding males, had died just two months earlier in Kenya.)[4] As the old year ended, blogger-ecologist David Steen called roll on “The Animals That Went Extinct in 2014”: the Christmas Island Forest Skink, the St. Helena Giant Earwig, the Malaysian Snail Plectostoma sciaphilum.[5] As the new year opened, USA Today provided a sober assessment of the “13 Species We Might Have to Say Goodbye to in 2015.”[6] (Most of those, like the Mountain Gorilla and Leatherback Turtle, are fortunately the focus of concerted conservation action.)

Lest we fall into despair, we can also tally recent conservation success stories.[7] In February the U.S. Fish and Wildlife Service removed the Oregon Chub, a small minnow endemic to the Willamette River valley, from the endangered species list—the first fish to be delisted.[8] Conservation biologists have recently reported that populations of the Amur Leopard (the world’s rarest large cat) and the iconic Giant Panda have risen over the last decade thanks to concerted conservation efforts.[9,10] In northern Illinois, prairie restorationists welcomed thirty American Bison to the Nachusa Grasslands—the first bison to roam on native prairie east of the Mississippi since 1830.[11] Earlier this month, one of them gave birth—the first wild bison born in the state since the early 1880s.[12]

Behind every news feed item, Twitter dispatch, and clickbait headline is a complicated story of the species itself. And each story, in any place at any given time, reflects a set of ever-shifting, ever-evolving ecological and social relationships. The presence or absence of a species is as much an expression of a community’s values and priorities as the presence or absence of a school, or a hospital, or a church, or a grocery store. The demise, or recovery, of a species is a manifestation of a human community’s collective knowledge, ethic, economy, policies, and ecological condition. Extinction does not merely mark the end of a genetic line and the expiring of a population. It is the final stage in the dimming and fraying of a socio-ecological reality. As such, global extinctions and local extirpations are also biological barometers. Like abnormal soil erosion and water pollution, anthropogenic extinctions are outward indicators of troublesome trends in our landscape relationships and in our ways of living within entire ecosystems—with each other and with other species.

It is just this perspective that seems so lacking in the current, high-profile push to “de-extinct” lost species like the Passenger Pigeon and Woolly Mammoth. We cannot simply “bring back” a species. No species exists, or can thrive, or can be restored, apart from the intricate reality of its behavior patterns, population dynamics, ecological relationships, and human social contexts. When the ultralight pilots of Operation Migration escort young Whooping Cranes on their first migration south to Florida, they are not simply leading a flock of birds.[13] They are perpetuating a biological lineage while also embodying the work and study and care of generations of dedicated field biologists, aviculturalists, ethologists, geneticists, educators, policy-makers, administrators, volunteers, funders, and citizen scientists. They are stopping over at the homes and locations of dozens of wetland landowners and wildlife enthusiasts, a dispersed conservation community stretching out along a thin, 1200-mile-long line. The bison of Nachusa did not, alas, return to the Prairie State of Illinois by swimming themselves across the Mississippi. They came by trailer from Iowa and, as a Chicago Tribune editorial noted, “settled into prairies that Nachusa’s volunteers had spent 450,000 hours preparing.”[14] 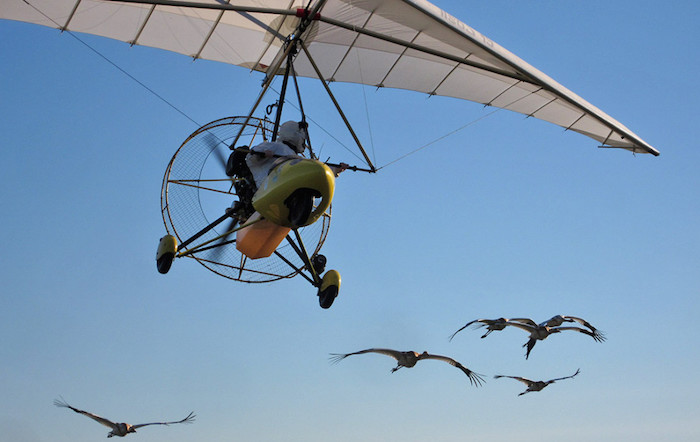 Extinction is a natural process that human agency has exacerbated and accelerated over the millennia.[15] As the human role within natural communities has intensified, especially in recent decades, extinction has become more and more a social process. Species survival is a function of continuity and connection within human and natural communities. Species abundance is an expression of biological opportunity and socio-ecological context. Species loss is the result of links that have inadvertently eroded—or that have been purposefully broken—in the land (and Earth) community. Species recovery is the result of links reestablished, space reclaimed, values shifting, and potentials realized in a changed and ever-changing environment. Every headline holds within it a saga, the drama of life in all its contingency and complexity.

The effort to resurrect extinct species now provides a new and unprecedented twist in the great narrative of life on Earth. As my colleague Stanley Temple has noted, “If extinction is not forever, everything changes.” An argument can be made that de-extincting species is in some sense a community effort, and a human effort, to right a human-caused wrong. In the case of the Passenger Pigeon, it certainly draws upon the historic efforts of nineteenth-century naturalists who devoted themselves to collecting specimens of the doomed bird and the techniques developed by cadres of modern synthetic biologists. But, at least at this early point in their self-defined mission, de-extinction advocates have displayed a narrowly reductionist and technocratic approach to the fate of species. Their supposition is that perpetuating (or resurrecting) a species is a matter of manipulating genes and engineering organisms, not of reconstituting and sustaining community relationships—among humans, within ecosystems, and between humans and nature—that can support healthy populations capable of perpetuating themselves within their changing places.

There is no doubt that the prospect of de-extinction appeals to a powerful human yearning for invention and redemption. But is it conservation in any meaningful sense, or is it a sideshow? Reconstituting a genome is not the same as conserving a species or a place. Undoubtedly, recovering an extinct genetic line and fashioning an organism out of it are daunting technical tasks. Yet, however difficult, those tasks are so much easier than the careful, demanding, day-to-day, person-to-person, person-to-place, life-long practice of conservation—not merely the weaving together of bits of genetic material, but of healthier relationships.

De-extinction, however new and attention-grabbing the technique, may simply perpetuate an ancient human flaw. It is liable to become just the latest example of human technological capacity outstripping its ethical application. Reflecting upon the meaning of the Passenger Pigeon’s annihilation, Aldo Leopold observed, “for one species to mourn the death of another is a new thing under the sun.” For Leopold and others, the extinction of the pigeon served as a call to reform our values in fundamental ways—to recognize “a sense of kinship with fellow-creatures; a wish to live and let live; a sense of wonder over the magnitude and duration of the biotic enterprise.”[16] This era of unprecedented anthropogenic extinction prompts us to seek not merely technological, but ethical, innovation. Those are not, need not be, and cannot be, exclusive categories. But the latter is always so much more difficult and complicated than the former. We always find it so much easier to change the world around us (and the things within it) than to change ourselves.