We humans are fascinated by the idea of life after death. This idea or hope probably goes back to the dawn of human consciousness. Beliefs in life after death, resurrection and, in some cases, reincarnation are key tenets of Christianity and many other religions.

Ancient burial rituals often included provisions to help the deceased in the journey to the afterlife. Ancient Egyptians and others used fluids, wraps, and other technologies of the day to preserve the corpse to help prepare it for its next life. Modern societies, including ours, continue the use of technology—embalming fluids and lined caskets—to preserve corpses whether or not these technologies are related to the belief in the afterlife. Cryogenics (deep freezing corpses) has been used with the explicit hope of bringing the dead back to life at some future, more technologically advanced, time.

Now technologies have allowed humans to contemplate the resurrection of species. Just as novel technologies, often misapplied or used carelessly, have led to extinction, scientists, ethicists, and others are now asking whether technology can enable life after death for species, so-called “de-extinction.”

Advances in cell biology have enabled the cloning of some animals. Other advances have facilitated genetic or genomic engineering—substitution of a few or many genes into an organism to import or enhance a trait desired by someone (although probably not the organism that is being manipulated). For the past couple of decades it has been possible to transfer genes from one species to another—even distantly related species—whether to make frost-resistant strawberries or day-glow tropical fishes and plants.

Whether for ill or good, there seems to be no technical limit to what can be done through biotechnology. And whatever limits we encounter today scientists and technologists probably will be able to go beyond in the future.

But is resurrection of extinct species a barrier that cannot be crossed? And if it can be crossed, should it be?

Much of the recent conversation about “de-extinction” has centered on the Passenger Pigeon (Ectopistes migratorius)—perhaps the iconic symbol of extinction, at least in North America. Much attention was paid to this species in 2014, the centenary of its extinction. I have studied this species in the only places where extinct species can be studied—libraries and museums—for more than thirty years (the same length of time it took the Passenger Pigeon population to crash from billions to inevitable extinction). Its numbers were legendary—estimated to have been some three to five billion as late as the mid-ninetenth century—and its crash to extinction in the wild shortly after the turn of the twentieth century and termination in 1914 remains an incomprehensible tragedy.

Methods of “de-extinction” have been discussed in Stanley Temple’s essay in this series. The proponents of genomically engineering a “Passenger Pigeon” claim that an engineered “Passenger Pigeon” is better than none. They propose identifying key genes from the DNA in the tissue of Passenger Pigeon specimens preserved in museums, copying these genes and inserting them into the genome of the pigeons nearest living relative—the Band-tailed Pigeon—and Voilà: instant Passenger Pigeon.

Why bring about a genetically modified Band-tailed Pigeon that looks somewhat like a Passenger Pigeon? I really can’t think of a good reason. 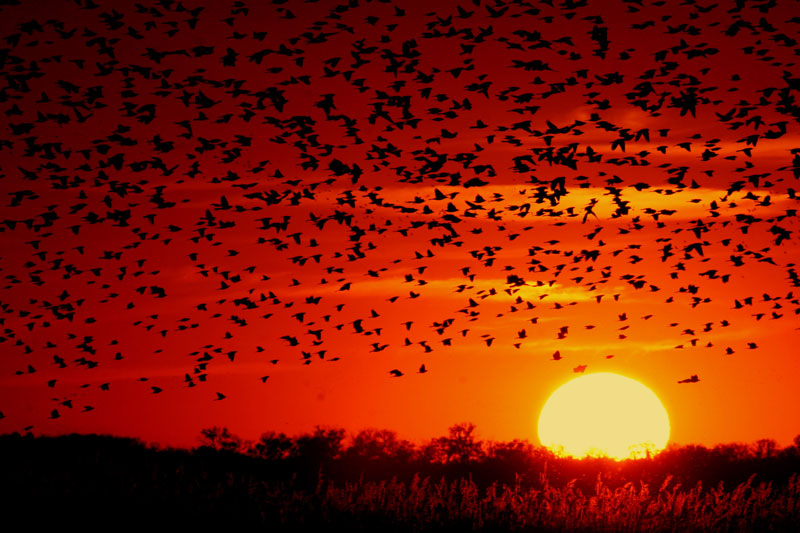 Even if biotechnologists were to create something that looked like and acted somewhat like a Passenger Pigeon, it would only be a bird in a cage. It is a long way from a solitary animal developed in a lab to wild flocks of hundreds of millions of birds roaring across an American landscape that no longer exists.

In the case of the Passenger Pigeon, a few birds do not make a flock. Passenger Pigeons entered an irreversible decline to extinction once their flocks were devastated to mere thousands, due to human avarice and ignorance. Their biological and ecological characteristics (such as only laying a single egg and nesting once a year) were adaptive when living in huge nomadic flocks that enabled them to find food and succeed reproductively by numerically overwhelming non-human predators. The continuance of the species was linked to its large population size. Thus, it was impossible for a small number of pigeons to persist in the late ninetenth century, and it would seem likewise impossible for a small number of genomically engineered birds to survive now.

Even if somehow a flock of Passenger Pigeons were to magically occur in twenty-first century America, it is highly unlikely that it could survive in the current fragmented and degraded habitat. And if the birds did somehow achieve large numbers, the damage that they would do to crops and forests would be the signature to their death warrant from the perspective of the agricultural and logging industries. As Aldo Leopold wryly noted, even in the wake of the pigeon’s extinction there were those who regarded its demise as inevitable; that “if the pigeoners had not done away with him, the farmers would ultimately have been obliged, in self-defense, to do so.”[3] Even as some now dream of resurrecting the species, it is not clear that we have gained, in the century since, any greater degree of tolerance, or any more willingness to coexist with such wild abundance.

The Passenger Pigeon may be an extreme example of the fallacy of “de-extinction” because of its unique biology and population status, but many of the concerns about genomic engineering that I have identified for the case of the Passenger Pigeon extend to other species. Regardless of the species selected for “de-extinction,” the result would be a new life form, not the resurrection of a species that human mismanagement has caused to disappear from the planet. It is disingenuous, at least, and biologically ignorant to claim otherwise.

It is relatively harmless to believe in life after death or in resurrection. Hope is a human emotion that is central to our existence. Maybe it is also relatively harmless to believe in “de-extinction.” It is certainly a seductive idea. But in a world facing mass extinction and an unprecedented loss in biodiversity, “de-extinction” seems a fantasy that at best distracts from conservation efforts and at worst could divert scarce resources from conserving the biodiversity that still surrounds us.

As a scientist, my job is to help the public distinguish between science and science fiction.

[2] Meine, C. “Reweaving Webs, Reimaging Ourselves.” Questions for a Resilient Future: how far should we go to bring back lost species? Retrieved from https://www.humansandnature.org/conservation—extinction—curt-meine-response-148.php )

[3] Leopold, A. (1947). On a Monument to the Pigeon. In W.E. Scott (Ed.), Silent Wings: A Memorial to the Passenger Pigeon (pp.3-5). Wisconsin Society for Ornithology. Reprinted in 2014 and available from http://wsobirds.org/support/shop-the-bookstore.

Image credit:“Blackbird-Sunset-03″ by Jerry Segraves is licensed under CC Zero.