Ethics from the Field

Translocation, captive breeding, somatic cell nuclear transfer (cloning), back-breeding, gene and seed banking—the list goes on. Today, there are a whole range of different technologies and techniques aimed at holding on to, or even resurrecting, species that might already be thought of as “lost” in some significant sense.

My inclination is not to definitively rule any of these interventions in or out in an absolutist manner. Rather, in a mode of thought coloured by Donna Haraway’s “cyborg politics”—which refuses both technophobia and technophilia—my approach to the complex ethical terrain opened up here demands attention to both the exciting, potentially world-enhancing possibilities of each approach, and to the many serious problems and difficulties that they raise.[1]

I see the ethics as inextricably tied to the context: what are the particular possibilities for life and death, the particular opportunities for flourishing, that are both opened up and foreclosed in specific applications of each approach?

I understand the proper role of ethics to be that of determining the kinds of questions we need to ask, the broad scope of analysis and exploration we need to take up, and the methods of inquiry and attention we need to cultivate such that we might, in each specific instance, have a better sense of how to proceed. In the context of this short response, I will offer a few preliminary thoughts in this direction.

Asking the question of “how far” requires us to develop the capacity to hold together issues of animal welfare and conservation in a way that takes both sets of obligations and responsibilities seriously. I have explored this challenge in some of my recent work on the captive breeding of the critically endangered Whooping Crane (Grus americana) and the “violent-care” of conservation.[2] These birds are subject to captivity and to stressful procedures like artificial insemination, while the freedom and in some cases the lives of members of other species are sacrificed to safeguard or prepare the way for the endangered birds. All of this happens inside what is, in many important ways, a deeply caring project carried out by people who are committed to the well-being and continuation of this species.

I inquired into how, in the context of conservation, the violence practiced is often rendered ethically unproblematic through processes of justification: the greater good of conservation trumps all other concerns.

These ethical issues can only be taken up in case-specific ways, inside the complexities of actual lived practices. In the case of the Whooping Crane program I have argued that this program should continue, but that it might be done in a way that refuses to “justify” itself and instead permanently holds open the question of how we might do captive breeding better, with less violence, and in a way that makes these difficulties visible and so demands more of us.

In the context of other captive breeding programs, however, we may well say that similar efforts do go a step too far. The devil will always be in the detail; in the specific patterns of life and death that are enabled and forestalled in particular contexts. 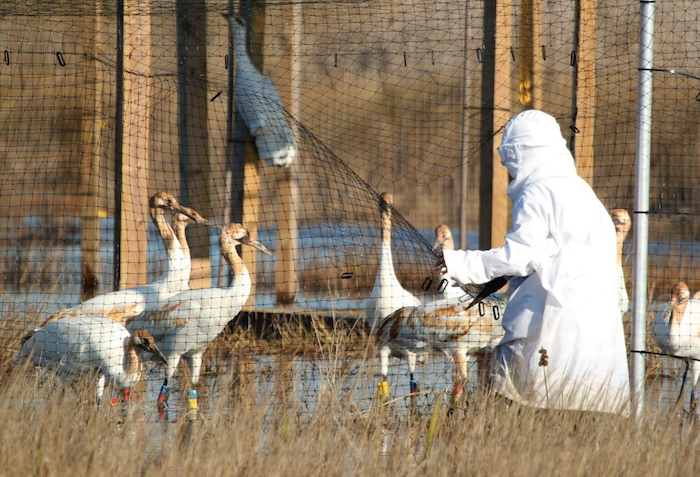 Beyond animal welfare concerns, taking up the question of “how far” also requires us to think about the consequences of various “counter extinction projects” for diverse human communities.

The Hawaiian Crow (Corvus hawaiiensis) is a case study in the complexity surrounding human interactions with and ideas of other species. I examined how the proposed release of captive bred birds was viewed by different members of the community, how specific understandings of the past (especially histories of colonization) and imagined futures played a role in shaping opposition to and support for this program.[3]

In India I have also explored how the absence of vultures (genus Gyps), those great consumers of carcasses and so containers of disease, has impacted in radically unequal ways on different parts of the local community: from Parsees who traditionally expose their dead to vultures, to members of the urban and rural poor who rely on them to strip cattle bones clean for collection and use in the fertilizer industry.[4]

This research is about cultural diversity. It is about the very different and always unequal ways that the presence and absence of a species is understood and experienced by human communities. It is about lived realities and the distinct “cultures of extinction” that they produce.

These human complexities need to be factored into our ethical reasoning to determine which modes of response are appropriate and desirable in the face of impending extinction.

De-extinction, for example, raises questions in every domain from conservation and animal welfare to culture and human well-being. These issues take form in distinct ways in the context of each specific application of the suite of technologies now often collected under this highly evocative banner.

Sadly, to date, there has not been enough attention to the complex ethical questions raised by the specific “biocultural communities” within which extinct animals, such as Passenger Pigeons or Thylacines, might be resurrected and “returned.”[5]

Amongst other things, these proposed projects require us think critically about what we mean by conservation. Matt Chrulew has noted that while these kinds of approaches might fit under a broad umbrella of “counter extinction” work, they aren’t really aimed at ‘conserving’ at all.

In paying attention to these nuances it is clear that what it means to go “too far” is anything but simple. The question of “how far” perhaps implies a certain one–dimensionality, as though there is a single axis along which we can assemble all of these approaches from best to worst, with reference to a given variable. In reality, the field of relevant concerns is a complex and multifaceted one.

Doing ethics in this space requires a different kind of philosophy.[6] It requires an interdisciplinary “field philosophy” grounded in both ethnographic work with relevant human communities and individuals and a sustained dialogue with the biological sciences. It is only from this kind of situated positioning that we can seriously begin to ask ethical questions about the kinds of relationships that ‘we’ (who?) ought to cultivate with ‘lost’ species.

Image credit: “Sara Zimorski in Whooping Crane Costume” by Gabe Giffin is licensed under CC BY 2.0.