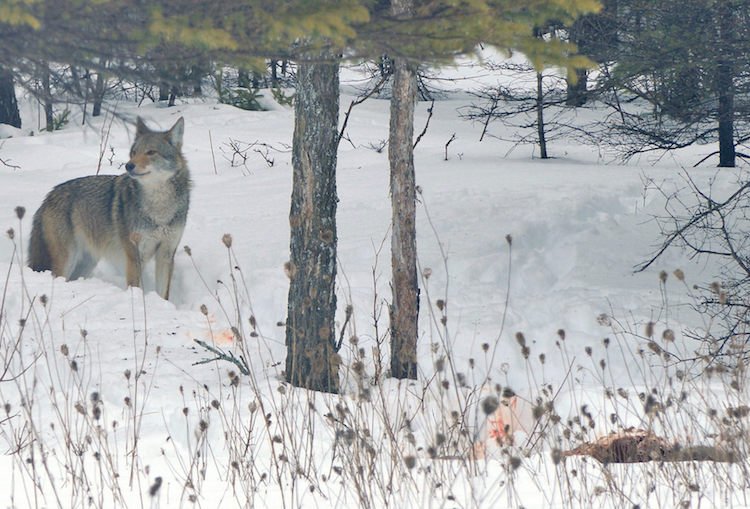 Around 9:30 pm after the last snow before the New Year, my dog almost jumped through the window. My family wondered what riled him. Probably coyotes, I said. My sister tiptoed to the window and confirmed I was right. We flicked off all the lights and pressed our noses to the cold glass, leaving round prints in the fog of our exhalation. We scanned the woods. A waxing moon above the bright abundance of snow made their silhouettes clear: a handful of coyotes, ambling east.

From that night on, the search for coyotes became routine. The dog and I would sit by the window, all the lights switched off—I with my binoculars, he with his head angled down in concentration. We stared between the trees into the crepuscular light; in the mornings, we looked for tracks. Soon after, I bought a trail camera and checked its SD card intermittently. First, a fisher. Some white-tailed deer and a cottontail rabbit. Finally, a lone coyote. 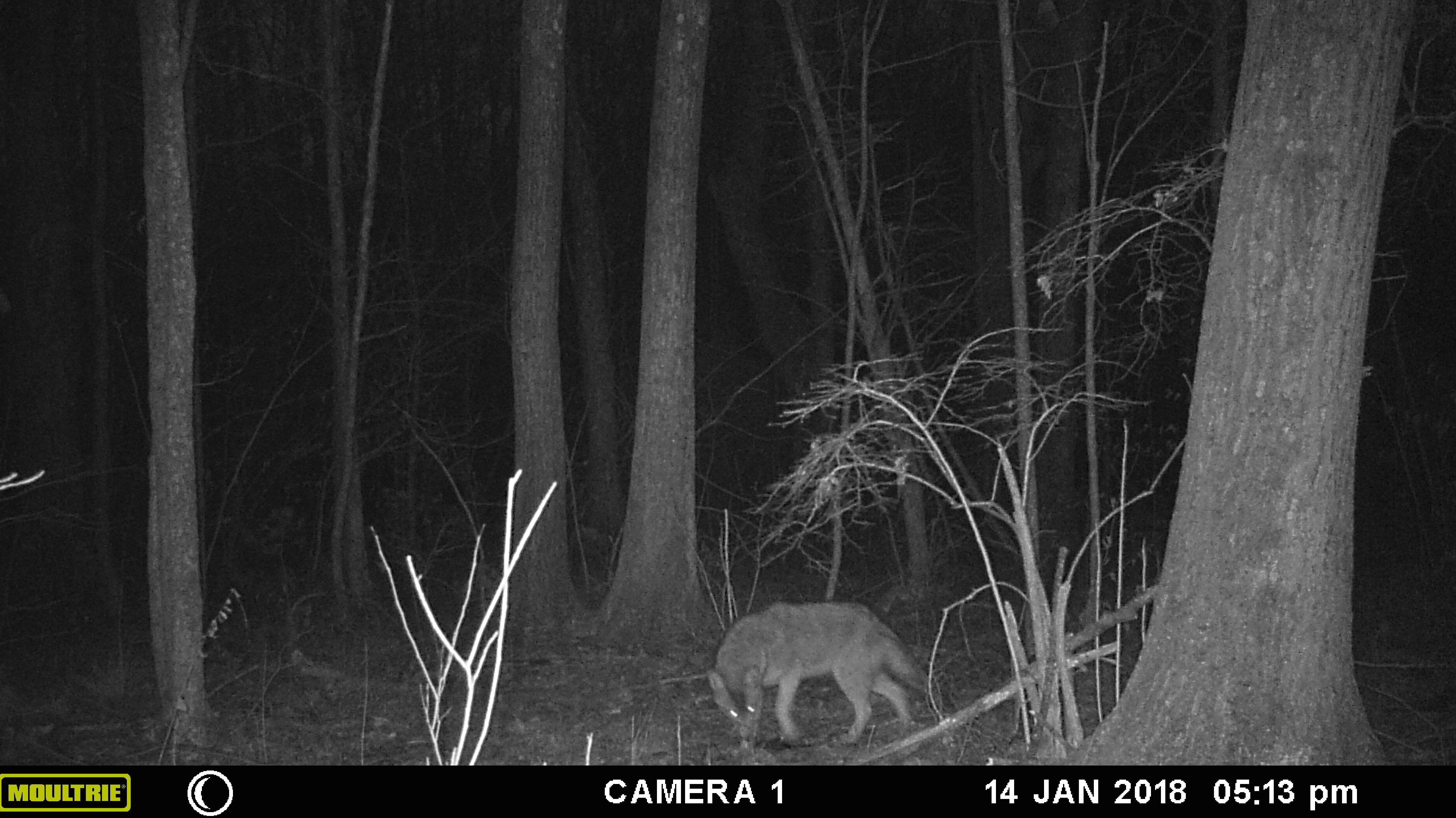 Coyotes are as elusive as they are abundant. An article in High Country News describes a group of urban teens who came close enough to a coyote to feel his “wild breath on their ankles if only they were to remove their socks.” They had no idea he was there. Knowing coyotes are so close without seeing them makes me crave a sighting all the more, but I’m often conflicted about my desire to come nearer to these animals. People cause problems when they get too close or feed coyotes. I don’t want to be one of those people. It is in our and coyotes’ best interest to “haze” them: make noise, shine bright lights, scare them off. People who treat coyotes like domestic dogs are the ones who create conflicts; coyotes who grow too comfortable are often the ones you see in the news. Yet every time I walk through the woods, I look over my shoulder and hope that a coyote or two will be there, almost close enough to touch. I can’t be certain whether I’d shout and scare them off or luxuriate in their company—trying to get closer.

I feel a twinge of shame at this uncertainty, and at the fact that I pronounce “coyote” ending with “tea,” rather than “oat.” The former feels cutesy, anthropomorphized. The latter feels impersonal, but there’s a brusqueness about it, rooted in familiarity. You hear it more in the West. When I told a Westerner friend about my coyote trail-cam escapades, he told me to buy a gun. John Steinbeck writes in Travels with Charley, “Coyotes are vermin. They steal chickens. They thin the ranks of quail and all other game birds. They must be killed. They are the enemy.”

But I am not a Westerner—and even with two coyotes in his cross hairs, Steinbeck did not shoot. Coyotes—to me, born and raised in Massachusetts—have always been a curiosity. Not vermin. And we in the East are dealing with a different canid. Our coyotes are bigger, crossed with wolves—the eastern coyote, or “coywolf.”

When European settlers exterminated wolves, opportunistic coyotes moved in to take over the territory. In the process, the two species hybridized. Enter the coywolf. Its genetic makeup is estimated at about a quarter wolf, with some dog mixed in. Dr. Jon Way, of Eastern Coyote Research, argues that the coywolf—which, he explains, “has been variously called coyote, eastern coyote, coydog, Tweed wolf, brush wolf, new wolf, northeastern coyote and now coywolf”—is its own species. He suggests the species should be called Canis oriens, or “eastern canid.” Others argue we shouldn’t call these animals “coywolf” at all. Zoologist Roland Kays concedes, “There is no doubt that there is a hybrid canid living in the eastern US,” but it “is not a new species—at least not yet—and I don’t think we should start calling it a ‘coywolf.’”

What I take from this, as curious bystander rather than scientist, is that there’s some wolf in these coyotes, and people can’t seem to agree what that means. What it means to me, a New Englander, is that these animals carry in their genes something lost. “Among the first laws instituted by the Puritan settlers of the Massachusetts Bay Colony in 1630,” notes Christopher Benfey, “was a bounty on wolves.” They were wiped out by 1840. I saw my first wolf through two layers of chain-link fence at a sanctuary in Ipswich—a town better known for fried clams and John Updike. But I’ve seen coywolves, whatever you want to call them, all my life, however rarely. They serve as a surrogate.

The genes of the wolf live on in the coywolf. They are protected by the coyote’s trademark resilience. This probably contributes to my reluctance to see eastern coyotes as “the enemy.” The murkiness of the coywolf identification debacle seems fitting, too. Is this a new species? Perhaps only time will tell. All I know now is that these canids are challenging scientific borders. As they should. Coyotes and coywolves alike laugh in the face of borders. They move seamlessly from the plains to a cul-de-sac to Los Angeles—even a rooftop in Queens. They are both wild and urban. They defy categorization.

And so I continue to look, through my binoculars or vicariously through a trail-camera. I hear these coyotes more than I see them. I know they’re out there. I find plenty of signs. Quite early this morning, while I attempted to fall back asleep, my dog made a similar racket to the one I described earlier. Again, probably coyotes. I stumbled downstairs, put him on a leash, and walked out into the woods. Not far in, I found a pile of fresh coyote scat. It made me smile. They have their world, I have mine—separate but somehow the same. The borders shift. We respect them as best we can. But quietly, in ways unique to each of us, we laugh at these borders—the coyotes, coywolves, and I.