In October 2015, the farming community surrounding the small township of Chinchilla, South East Queensland was rocked by the tragic suicide of 68-year-old George Bender.[1] Born and raised as a fifth generation farmer in the fertile agricultural lands of the Darling Downs and a farmer himself for more than fifty years, the life that George and his family loved began to change in 2005 when unconventional gas mining companies began operating in his local area.

George and his family grew cotton, sorghum, chickpeas, and barley and had a very successful piggery. From the outset, George was deeply concerned about how the gas wells would impact the farm, his family’s quality of life, and their community. From 2005 until his death in 2015, George Bender and his family had been actively resisting demands from energy companies first to drill on, and  later to purchase so they could drill on, his land. Despite the Bender’s resistance, the growth of the gas fields and gas production on the properties surrounding George’s land steadily caused a deterioration in his family’s capacity to farm and live their lives peacefully. And the industry grew fast. There were no gas wells in 2000; sixteen years later there were more than 7,000—with thousands more planned. For the Benders, within only a few years, the growing industrial activity in their region was taking its toll. There was increased heavy traffic, the construction of massive pipelines and, on neighboring land, the exploration and drilling of wells. Nauseating odors began to infiltrate their land and home, and caused the animals in their 70-year-old piggery to fall ill, break out in rashes, deliver stillborn litters, and die. The Benders also suffered the loss of much of their water supplies when their water bores were identified, in 2012, to be in the Immediately Affected Area (IAA); this loss has been linked to water use by nearby gas operations.

The psychological pressure imposed on families like the Benders, who were targeted by the gas industry for their land, was also relentless and immense. Finally, in 2015, George and his family were under increasing pressure to sell their property—and, in effect, give up the life they loved so very dearly. The emotional and mental pressure took its toll. George’s suicide can be seen as the final act of someone whose life had been contaminated, both physically and emotionally, by an industry that couldn’t be stopped. 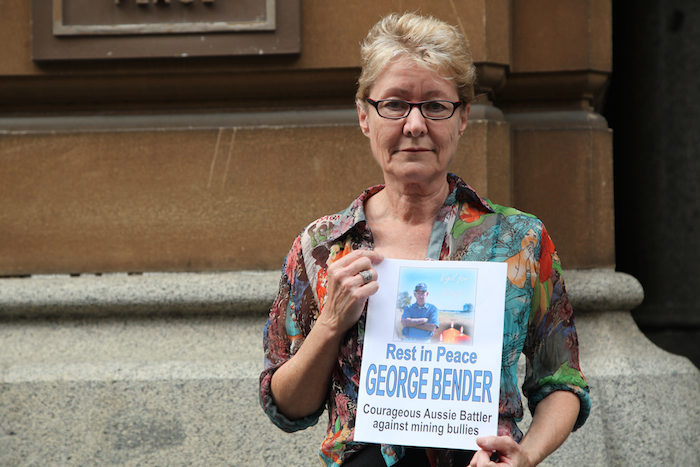 George’s suicide is a tragedy for his family and a heart-breaking symbol of the true cost of the gas fields in Queensland. The story of the impacts of the industry on the Bender family is not an isolated one. The coal seam gas industry insists that its processing, storing, disposal, and production methods are safe; however, growing evidence points to the contrary. George’s suffering is echoed in the stories of many other people who have watched their own farming land, natural environment, and their surrounding community become a gas field while their children and stock animals grow ill from mysterious rashes, respiratory problems, and other illnesses. They have watched water in creeks and dams bubble with methane gas and catch fire, due to the depressurization of underground aquifers that releases free-flowing methane. They have been forced to move from the homes they loved, and the lives they’d built, in order to escape illness and deteriorating physical health. And all of this has taken place in a surreal legal landscape where ordinary people do not have the right to say no to the demands of the unconventional gas industry.

Does this violate human rights? I think it does.

In Australia, unconventional gas mining is the generic term used to refer to a range of relatively new methods of extracting gas from beneath the earth and includes hydraulic fracturing (fracking), coal seam gas, tight gas, shale gas, and underground gasification. In the Queensland gas fields, at the moment, fracking operations make up a small proportion of the industry—most operations involve coal seam gas mining. However, future plans include a significant increase in fracking processes.

In Australian law, no landholder is legally able to stop mining interests from exploring and mining on their land. For example, in Queensland, under the 2004 Petroleum and Gas Act, while farmers and other people in Queensland own their own land, the State Government owns the minerals beneath it. This fundamental legal principle is a legacy of English medieval laws, where the Crown ensured that it owned all the mineral wealth beneath the soil. If an Australian State government grants an energy company the right to use land for exploration and production, landholders have no say in the matter. Often they don’t even know that an energy company has been granted a right to explore on their land until a letter arrives advising that specific operations are about to start, at which point, legally speaking, landholders have no rights to stop exploration and drilling. This legal reality is one of the reasons that resistance group Lock the Gate was created in 2010 and has grown to be one of Australia’s largest and most successful civil rights groups.[2] And this legal reality will be an important consideration for the upcoming Permanent Peoples Tribunal on Fracking. The fact that people cannot stop the intrusion of gas mining activity on their land and in their communities must surely be considered a violation of basic human rights.

After the atrocities of the Second World War, the international community worked together to create the United Nations and agreed to a constellation of important new treaties aimed at guaranteeing human rights. These began with the Universal Declaration of Human Rights in 1948 and now include the International Covenant on Economic, Social and Cultural Rights (1966), the International Covenant on Civil and Political Rights (1966), and many other treaties. The International Human Rights regime is aimed at protecting peoples’ right to life, to health, and to an economic future. Surely if governments allow and support industrial activity that takes away peoples’ rights to a healthy, safe, and economically productive life, they are violating human rights.

People didn’t know much about unconventional gas mining when it began in Queensland fifteen years ago, and many families willingly agreed to the original wave of gas wells, believing that these wells could indeed co-exist with their farming and community life. However the passing years have demonstrated the negative impacts of coal seam gas on people and the environment. Despite the ongoing debate about how much of the alleged impacts of coal seam gas can be proven, in the past few years, other State Governments in Australia have passed laws (moratoria) to prevent unconventional gas mining from taking place in their jurisdictions. For now, people continue to experience the devastating impacts of unconventional gas mining in Queensland and continue to fight for the cessation of the industry.

The death of George Bender was felt throughout the entire Australian community, particularly among those who continue to challenge the devastating impacts of the unconventional gas industry. I believe that the tragic passing of George Bender, and the suffering he experienced before the end of his life, will be one of the many serious and influential stories that lead to the eventual cessation of the Queensland gas industry, an industry that violates human rights and violates the very essence of the rights of all life to exist, thrive, and evolve.

Author’s note: Michelle Maloney is grateful to Helen Bender, George Bender’s daughter, for reviewing this article about her father and granting permission to write about her family. To follow the Benders, please visit their Facebook page.