Cosmos as Home: Evolution as Context 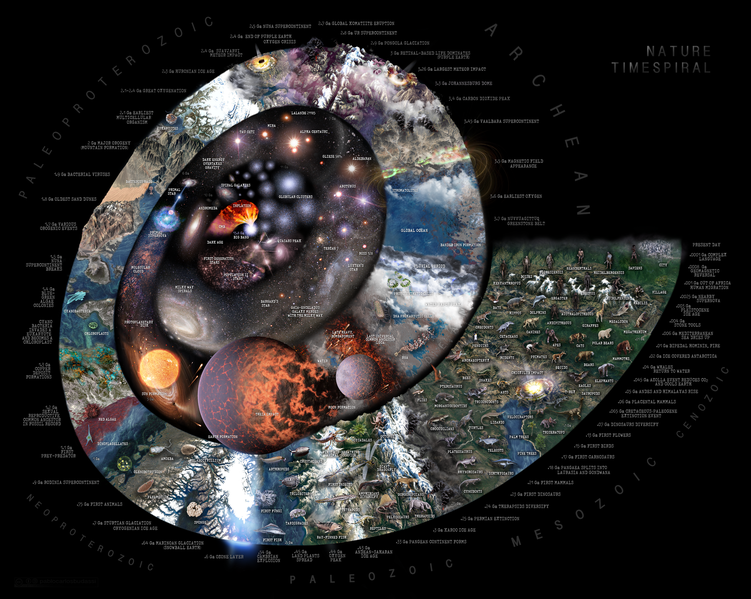 The news is still new–the concept of evolution that is. We humans are just processing what evolution is and what it means to us. The theory of biological and human evolution as first presented by Charles Darwin in his book On the Origin of Species is only 160 years old. Even for Darwin, the implications of human evolution were astounding and unsettling. It is one of the most remarkable discoveries of modern science.

Similarly, the idea of Cosmic evolution as discovered by twentieth century scientists is slowly being understood by a broader public. The notion that we live in a changing Universe is hard to absorb. Indeed, moving from the image of a static Cosmos to a dynamic cosmogenesis is one of the greatest conceptual challenges for modern humans.

Through scientific research and discovery, we have come to know many of the factual details of cosmic, biological, and human evolution. This scientific knowledge was not available to people even 160 years ago. That the Universe is nearly 14 billion years old is very recent knowledge. That there are two trillion galaxies was not known to our grandparents or to their parents. The common understanding was there was only one, our Milky Way galaxy. But the larger implications of this new knowledge for how we view ourselves and our lives  still eludes us. We are trying to grasp the significance of deep evolutionary time and expansive galactic space.

Why is this process of understanding so challenging for us? Partly because evolution has been taught within the scientific community primarily as a series of facts without larger coherence or meaning. The separation of facts and values is foundational to science and the empirical method. At the same time, some religions have not regarded evolution with the same significance as their own scriptures and traditions. They have held evolution at a distance. The gap between science and religion for some in Christianity, for example, is still great.

Moreover, modern secularism has stripped away a larger sense of meaning and purpose of our lives leaving many people lost, alienated, and adrift. Secularism has left religion behind and marginalized spirituality in favor of rationalism. Materialism stepped into the breach, replacing the search for spiritual meaning with the clamor for more goods and entertainment.

Before we can find our way back home in the universe, we need to embrace the process of evolution as an unfolding process, woven through with creativity. This is the broader context in which we might ponder the question of seeing the Cosmos as home. Evolution can be realized in the human mind, experienced in the body, and absorbed in the spirit. This will take time. But with conscious effort and careful reflection, we can see ourselves as part of a dynamic integrated whole: Cosmos, Earth, and humans.

We know some of the obstacles to getting to this goal. Science and religion have been in tension for centuries. One might say this is especially true since Copernicus (1473-1543) observed and Galileo (1564-1642) proved that the Earth revolves around the sun. Poor Galileo! He was only trying to deliver the truth by reporting his observations accurately. His telescope changed the long accepted worldview inherited from Ptolemy in the 2nd century. Through Galileo’s eyes and his mathematical calculations, Copernicus’s thesis, published in 1542, was confirmed: We don’t live in an Earth-centered astronomical system, but a Sun-centered one, a Solar System. The medieval worldview of a  geocentric system was shattered. The Copernican heliocentric Universe was affirmed. The Church could not accept this, as they saw it as heresy. They felt that somehow this contradicted scripture, which should be accepted literally. Even modern humans have not fully absorbed the full implications of this discovery—namely, we are not the center of all things.

When a worldview is challenged or proven wrong there is a price to pay and the cost may be high. Galileo, for example, was subject to a trial by church authorities during the Inquisition. He was ultimately condemned for his views, which were considered heretical. Rather than jail, he was sentenced to house arrest in 1633, which lasted until he died almost a decade later. His books, along with those of Copernicus and Johannes Kepler were banned. They were not taken off the Index of Forbidden Books until 1835.

This condemnation, while clearly mistaken, was only officially addressed by the Catholic Church more than three hundred and fifty years later. After a decade of study by a papal commission established in 1981, no definitive results were reported on the Galileo case. Instead, on October 31, 1992, Pope John Paul II delivered a speech at the Pontifical Academy of Sciences. There he acknowledged, in a convoluted way, that misunderstandings had arisen but now are part of the past: “A tragic mutual incomprehension has been interpreted as the reflection of a fundamental opposition between science and faith. The clarifications furnished by recent historical studies enable us to state that this sad misunderstanding now belongs to the past.”

Four years later John Paul  issued a statement on evolution declaring that: “Fresh knowledge leads to recognition of the theory of evolution as more than just a hypothesis.” He also affirmed that the teaching of evolution and religious faith could co-exist. Progress, one might say, after many centuries of religious doubt!

We might also note that sometimes scientists themselves cannot accept an unexpected change of worldview. Let’s look at two examples—Albert Einstein (1879-1955) and Alfred Wegener (1880-1930). From 1917 Einstein himself did not believe his own general theory of relativity equations that identified the early Universe as expanding. He held on to the notion of a steady state universe. It took him many years to accept an expanding Universe, and only because of the work of other astrophysicists in the field. In January 1931 Einstein visited Edwin Hubble and looked into the massive telescope on Mount Wilson in Southern California. Hubble had discovered two years earlier that galaxies were moving away from one another. After much consideration of both theory and observation, Einstein delivered a paper at the Prussian Academy of Sciences in April 1931 finally accepting what his older cosmology obscured. His worldview cracked open to embrace an expanding Universe. He had to change his equations back to what he first had calculated in 1917 and remove the cosmological constant, the “fudge factor.”  Einstein later admitted this was the greatest blunder of his life.

Then there is Alfred Wegener who proposed the theory of continental drift, which led eventually to the discovery of plate tectonics. His study On the Origin of Continents, published in 1912, revealed that continental plates had moved over time, even at one point forming a whole, a Pangaea. But scientists doubted this. It didn’t seem plausible—these massive continents moving? How could that be? Wegener’s theory was marginalized and dismissed. It took some fifty years for his ideas to be accepted in the scientific community, well after his death.

Change is difficult when it means leaving behind one worldview or cosmology and moving into another. We find this in the cases of Galileo, with opposition from the Catholic Church; Einstein, with his own self-doubt; and Wegener, with criticism from other scientists. We can see this, too, in religious communities that are afraid to step into the great current of evolution, lest they be swept away into unbelief in a Creator God. But skepticism need not lead to despair or unraveling of a worldview. It can give rise to a new more comprehensive and inclusive worldview.

This is where we are now. Science is offering, from all of its various disciplines, a comprehensive evolutionary cosmology that illustrates the rich continuity of Cosmos-Earth-human. So fresh questions arise: How do we humans belong to this vast universe, and what is our role? How do we break through to a new cosmological understanding that orients us within the vast forces of the universe and grounds us in Earth processes? And how is such a new cosmology inclusive of people and planet, embracing both cultural and biological diversity? This will take time, effort, and persistence.

Our challenge, then, is to see ourselves as part of a vast evolving Universe where the Cosmos, too, is our home. Many cultures have embraced this perspective beginning with Indigenous peoples. Their cosmovisions continue to provide them with a rich sensibility of the stars as relatives and galaxies as luminous living presences. All humans are descendants of these heavenly bodies. As we say in Journey of the Universe, “the stars are our ancestors.”

Our task then is to see cosmic and biological evolution not simply as a collection of scientific truths placed in a reductionistic framework and operating within mechanistic processes without meaning or purpose. How can humans engage with such a framework where matter is viewed as dead—simply a collection of objects, not a communion of subjects, as Thomas Berry has noted?  Rather, we need an integrated cosmology where science and story are interwoven, where facts and values are braided. As Einstein said: “Science without religion is lame; religion without science is blind.”

For the Cosmos is indeed our home, our birthplace, a womb of immense creativity. Out of billions of years of cosmic evolution came Earth and life forms. The thin layer of atmosphere of our planet created the conditions for life. Geology morphed into biology as the lithosphere and hydrosphere evolved into the ecosphere. Without cosmic evolution there is no planetary evolution or emergence of life. And the conditions for this life were established in the very first three minutes of the early Universe’s rate of expansion. With even a millisecond faster or slower, no life would have come forth.[1]

Is this not sufficient reason to respond with awe and wonder at what has emerged over 14 billion years? Is this not the time to celebrate evolution as one dynamic unfolding process? With such an understanding of the continuity of all life we can develop a more robust cosmological ethics highlighting responsibility and reciprocity for our magnificent Earth community.

Figure of the heavenly bodies. Illuminated illustration of the Ptolemaic geocentric conception of the Universe by Portuguese cosmographer and cartographer Bartolomeu Velho (?-1568). https://commons.wikimedia.org/wiki/File:Bartolomeu_Velho_1568.jpg.