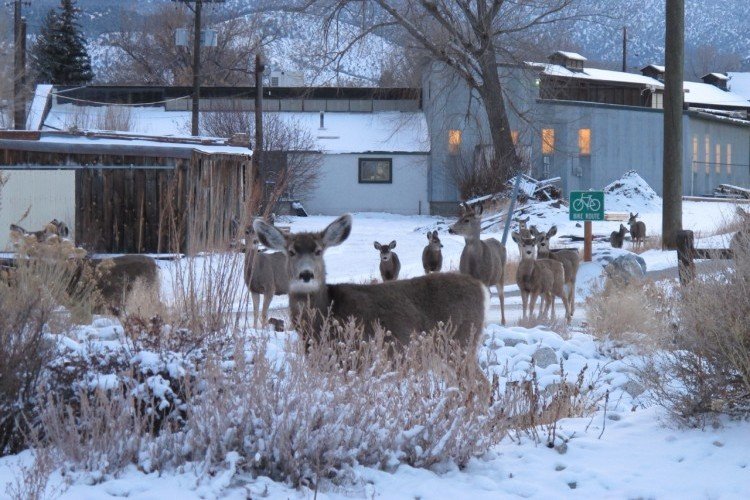 I live in a small town (5,200 people) in rural south-central Colorado surrounded by wind-swept, high-desert grassland and peaks that rise to over 14,000 feet in elevation. My county is 80 percent public land and it’s pretty isolated; we’re two hours by a two-lane mountain road from the nearest interstate highway, shopping mall, or metropolitan area.

It’s not the kind of place you imagine would have an urban deer population problem.

You’d be wrong. In the nineteen years I’ve lived here, our town herd of mule deer (Oedicolus hemionus) has grown from perhaps two dozen wary animals to somewhere around 150 people-habituated deer who lounge in yards and parks like large, hoofed pets.1 About half the town considers these big-eared residents “cute” and the other half revile them as “Yard Rats.” 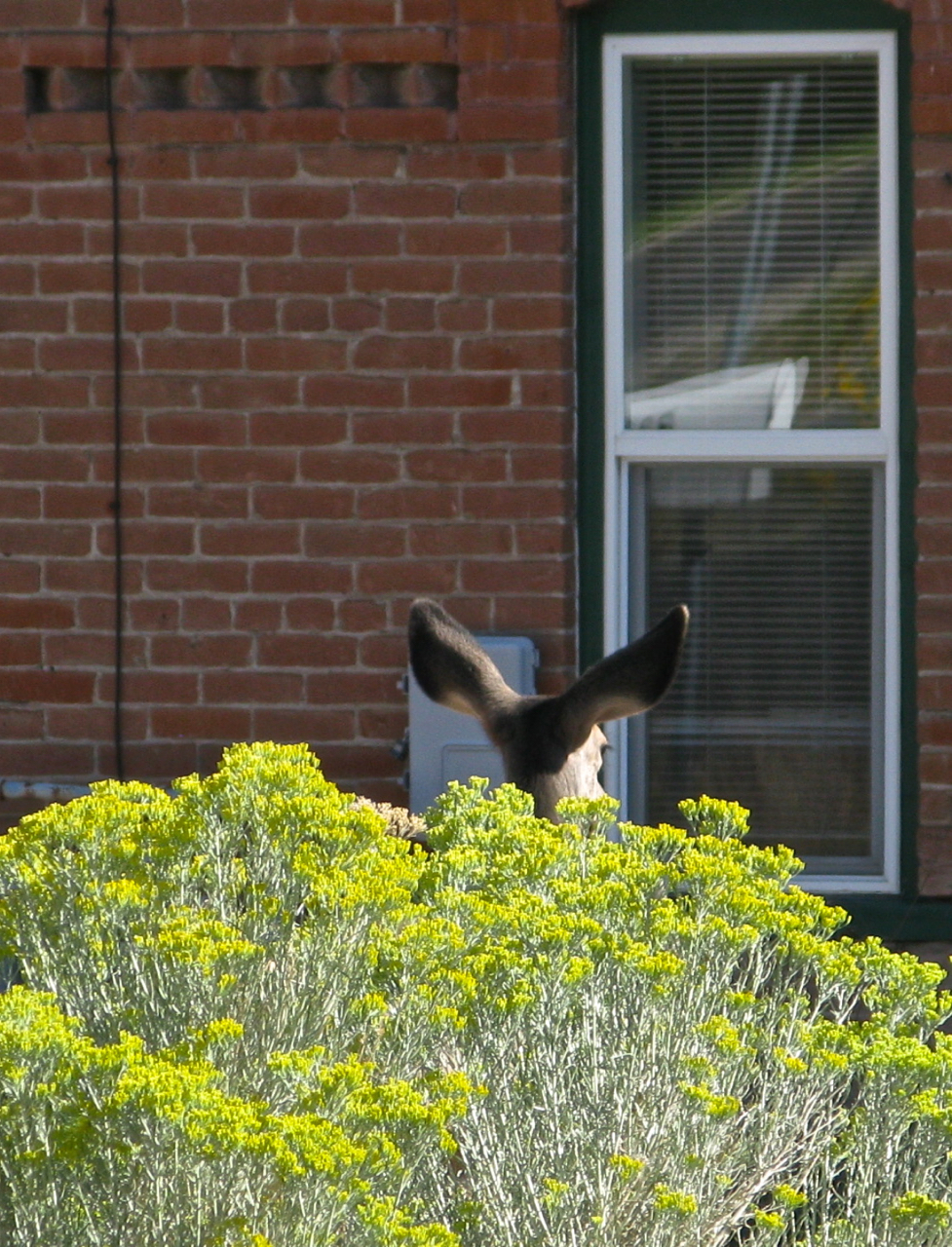 Like them or not, pretty much everyone agrees that the population has outstripped the habitat. Too many mule deer cause problems similar to those other City Creatures contributors have elucidated about white-tailed deer—only the problems are bigger, since male mule deer average about 30 percent larger than white-tailed males, weighing an average of 150 pounds, with large ones exceeding 400 pounds.

Our swollen deer herd has damaged our urban ecosystem, browsing the shrubs along one restored section of a local creek so much that the flow is unshaded and no longer healthy habitat for trout; leaving park lawns paved with deer turds; and chowing gardens to bare dirt. Adverse deer-human interactions have left an elderly woman seriously injured, and killed a few small dogs. Worse still, many of the deer from our local herd look mangy and underfed, and some sport abrasions and/or crooked limbs from collisions with vehicles. 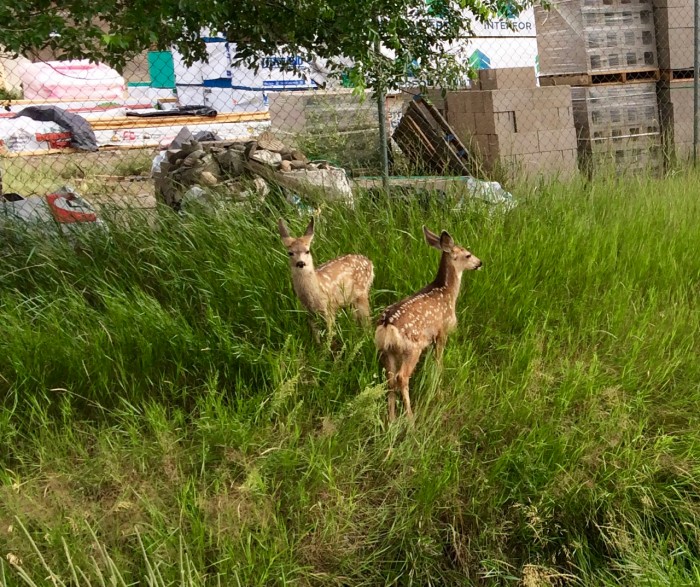 The problem has gotten serious enough that our town deer now have their own citizen commission, which spent more than a year studying how and whether to control their population, but never released any recommendations.

That’s partly due to the politics of recommending any action in a town with opinion so polarized, and partly because none of the available options for control offers the metaphorical magic bullet. Controlling urban deer populations involves difficult tradeoffs in terms of public opinion, environmental ethics, dollars, and ecosystem management.

The problem isn’t really the deer; it’s our taste in landscaping. By importing shade trees and deer-delicacies like roses and lilacs, we’ve created great habitat in what used to be mountain prairie that is much more suited to pronghorn. The muleys simply took our unintentional invitation and made themselves at home. We could learn to live with them, and perhaps, as Lauren Koshere suggested, develop a taste for uber-local venison. I’m fine with that approach, except for one thing: Chronic Wasting Disease.

This fatal brain-wasting disease is endemic in Rocky Mountain deer, elk, and moose. It was discovered in research pens at Colorado State University in 1967, and is named for what it does: infected animals lose weight, become listless, and eventually waste to death. (A summary of CWD is available on the Colorado Division of Parks and Wildlife website.) It’s a slow and ugly process.

As with other transmissible spongiform encephalopathy diseases (including Mad Cow in bovines and Creutzfeldt-Jakob in humans), Chronic Wasting Disease causes a characteristic sponge-like pattern of holes in infected animals’ brains as protein molecules degrade into misshapen “prions,” which destroy the cells that house them and alter other proteins, thus spreading the disease. There is no cure.

A further concern for those who live with swelling urban deer populations is the “density-dependent” aspect of this mysterious disease: the chance of infection in adult deer is partly dependent on herd density. That’s because the disease is transmitted from animal to animal through contact with saliva, blood, feces, infected tissue, decaying carcasses, and, as new research shows, from eating plants that have taken up and sequestered the deadly prions in their tissues.2 The more crowded the living conditions, the greater the likelihood of a Chronic Wasting Disease epidemic.

I didn’t think about Chronic Wasting Disease in relation to my town’s scruffy mule deer herd until I stumbled across a study from Boulder, Colorado, where the question of how to manage the burgeoning urban mule deer herd had long been contentious. (When my family lived there in the 1980s, about half the town loved the deer and half hated them, which sounds familiar.)

Boulder’s urban deer herd, nourished by rose bushes, tulips, apple trees and other non-native plants, had overpopulated its habitat when the fatal illness was first detected in the Table Mesa herd in 1985. Over the next thirty years, researchers say, numbers of adult mule deer in that herd dropped 45 percent, an astonishing decrease for deer protected from hunting. Almost one in three adult deer in the herd were infected with Chronic Wasting Disease, and, in some age-groups, infection rates were as high as 80 percent.

Further, the study showed, infected mule deer adults were more likely to be killed in deer-vehicle collisions or by mountain lions, which, researchers speculate, moved into town to exploit the easy pickings when mule deer, which are their main prey, became sick and disoriented.

Like Boulder, my little town is smack in the middle of prime mountain lion territory. The big cats periodically pass through our neighborhoods but don’t usually stay. That may change.

The Colorado Division of Parks and Wildlife recently announced that Chronic Wasting Disease has been detected at low levels in the neighboring county, potentially as close as five miles from here. That’s a hop, skip, and a bounce for mule deer.

So it’s not far-fetched to conclude that by allowing our town deer herd to burgeon beyond any natural limits, we’ve set the stage for the arrival of Chronic Wasting Disease with all its ugly implications, followed by mountain lions eager to dine at the alfresco deer-bar—along with any other easily caught prey, whether joggers, kids biking home from school, or Fido.

That makes our town deer seem a lot less cute, and possibly quite deadly. 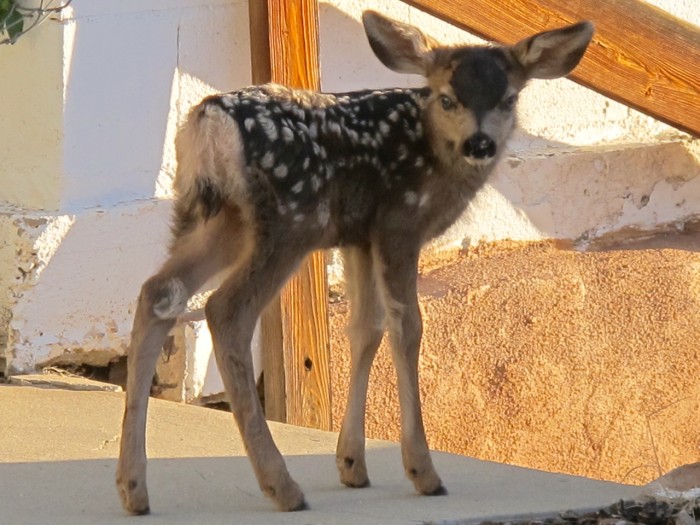 Whether or not you “like” our town deer is not the point. They are here with us. Despite how familiar they have become, I still feel a wave of awe—and a prickling of fear—when a herd materializes out of the darkness a few yards from me as I pace home from a run on a winter evening. In that moment, I remember that they are wild, and I am part of their ecosystem. I cherish that visceral reminder that we—deer, humans, mountain lions, trout—are all in this thing called “life” together.

1 Population estimates from a local game warden, who I talked to at the Post Office—one of two places to hear all the news in my small town, the other being the grocery store. ☺