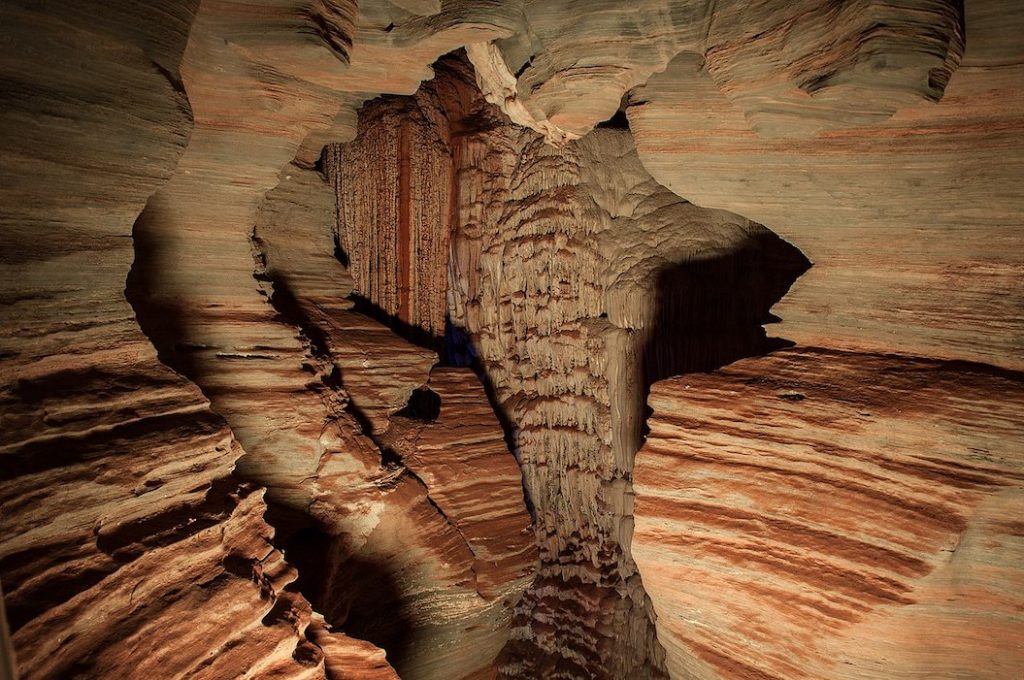 Photo Credit: Textures in the Cave of Lapinha, by Rafael Rodrigues Camargo

And for all this, nature is never spent;

There lives the dearest freshness deep down things;

And though the last lights off the black West went

Because the Holy Ghost over the bent

World broods with warm breast and with ah! bright wings.

We abuse land because we regard it as a commodity belonging to us. When we see land as a community to which we belong, we may begin to use it with love and respect.

We call this journal Minding Nature because its pages, and the work of the Center for Humans and Nature as a whole, exemplify the multiple dimensions of the enterprise that the phrase suggests. I like to think of these dimensions in a simple, old-fashioned (indeed, classically antique) sense. They are the true, the good, and the beautiful.

The true. The phrase connotes knowledge. To mind nature is to think about, study, learn from, and try to understand nature. Beyond developing a body of knowledge, minding is also a formative process. To mind nature is critically to grasp the many ways the human imagination has fashioned and used concepts of nature, and how those concepts have influenced human history and culture. Nature reflected in the human mind transforms itself because these ideas of nature prompt human action that affects nature. Those who hold otherwise are fish who don’t recognize that they live in water.

The good. The phrase also suggests the ethical dimension of the humans and nature relationship—responsibility and care. To mind nature is to obey it; to conduct human living and doing in a way compatible with the health and flourishing of non-human nature. To mind nature is yet again to care for and to care about it. (This is perhaps more a British idiom than an American one.)

The beautiful. Finally, the phrase suggests the act of discerning the sublime, perhaps the sacred; at any rate the something that Charles Darwin saw in “endless forms most beautiful and most wonderful,” and the poet Gerard Manley Hopkins captured in his remarkably evocative line: “There lives the dearest freshness deep down things.” To mind nature is to discover in it the essential characteristic of a meaning or significance beyond ourselves.

Credit and inspiration for Minding Nature goes to Strachan Donnelley. In his work (see Frog Pond Philosophy) and in founding the Center, Donnelley sought a new form of minding—fundamental and non-dogmatic philosophical thinking, indeed a new worldview—rooted in the understanding of nature given in Darwinian evolutionary biology. This will, above all, permit us to think and to act in new ways, to create a different kind of relationship with dynamic, living nature and biotic communities.

This captures the leitmotif of Minding Nature, which is searching for the forms of thought and action that will transform our limited moral imagination from seeing the natural world as a “resource” to be used (and used up), to seeing it in the shape of relationships of care, non-violence, respect, common value, and the systemically supported diversity of life. This is a moral transformation that must be reflected in economic modes of thought and action. To mind nature is to ask how this way of viewing nature redounds in our civic and communal lives; it is to reflect on these matters through the work of important theologies of nature and through secular and traditional lenses such as an Aristotelian or a neo-Stoic understanding of eudaimonia and human flourishing.

Minding Nature will also mind nature by seeking and articulating new languages of planning and politics in land-use policy and placemaking in living ecosystems. For example, while our planning processes today are protecting rivers, they are not always giving our communities a meaningful relationship to them. We don’t have the conceptual vocabulary to talk about that, and so we don’t. The mainstream planning and political languages are idioms of conflicting interests over nature seen as a resource. Minding Nature seeks forms of discourse and action, practices of democratic citizenship, that truly move from resource thinking to relational minding.

Launched with a single issue appearing late in 2008, Minding Nature is now in its forty-second issue published over the course of fifteen years. In the early issues, the journal tended to be thin in its page count, ratiocinative in its prose, and Spartan in its graphic design. Today, each fat issue is full of color, art, poetry, conversational interviews, expressive nature writing, and serious ethical and policy arguments and judgments. We have devoted entire issues to the work of students from the worlds of fine arts and design, ecological ethics, and community action. We have integrated Minding Nature into larger projects undertaken by the Center for Humans and Nature regarding human relationships with wildlife in urban environments and with its questions for a resilient future having to do with place, democracy, ancestry, cosmology, spirituality, and much more.

Minding Nature was founded on two constitutive commitments and they have continued to be manifest in almost all of the work we have published over the years. The first founding tenet is that Minding Nature is, first and foremost, a journal of blurred genres, to borrow a phrase from anthropologist Clifford Geertz. Today it might be more current to say we are a journal of entangled or enmeshed thinking. The epistemological metaphors vary with the times.

Some believe that the work of understanding has little value unless tangles are cleared and lines are pulled straight and taut. Yet in the years the weaving loom of Minding Nature has been at work, it has become increasingly clear that the path to a deeper, more sustainable and respectful understanding of the living world is not adequately marked by straight lines and right angles.

I grew up in northeastern Indiana, and its land and I both bear the imprint of gauging the value of much in life—too much—by the metric of proprietarian efficiency. There one learns to think in terms of sections a mile square and to navigate the roads that run between them. It has taken some self-scrutiny and the privilege of working with a host of creative and critical thinkers for me to find the value in the blur and to see the need for a re-entangled point of view. Everyone today must be deeply troubled by the widespread tendency to surrender one’s belief to conspiracy narratives and to self-isolate en masse in a mile square virtual bubble of self-perpetuating straight-line information. All too often, efforts to offset this paranoid style in politics by recourse to scientific findings and fact checking seem to be unavailing; too often such efforts only reinforce the strength of the obsessive tunnel vision because they do not get to an important underlying factor. I refer to a deep-seated inability to recognize symbiotic life and the rich promise of human thriving that it holds. The field of literary and cultural studies once maintained that its mission was to enhance a society’s ability to tolerate ambiguity. Might it also be that the signal contribution of the ecological humanities, broadly defined, is to transcend barriers and boundaries that no longer provide viable senses of place and time in our lives, and to seek what the architect Christopher Alexander called “a pattern language” that does?

The second enduring founding tenet of Minding Nature is that ideas and culture shape the relationship or interactions between humans and nature no less than money and power do. That notion is as important as it is often overlooked. How often do we hear the mantra, “Follow the money”? Minding Nature aspires to lead the money based on the hunch that it will not be possible to transform institutions and structures of money and power first and then simply allow cultural perceptions, norms, and values to follow along.

Ideas have so much tenacity that they may also have a causal priority at certain times and places. They are not inevitably the handmaidens of power and wealth. The iron grip that money and power—and their intellectual apologists—have on ideas must be contested and pried open, one strong finger at a time. Some signs of this are now discernable. They come against the shadow of the global recession and economic austerity caused by irresponsible financial practices in the late 2000s, from which many areas have still not fully recovered. And these signs are beginning to appear as we struggle to emerge from the combined crises of racial and ethnic oppression, mass migration fleeing violence, deadly pandemic disease, and widespread economic unemployment and precarity.

Perhaps the overriding development that has pressed upon the contribution that Minding Nature has made to the discourse of the ecological humanities and to the various social movements influencing ecological governance has been the growing specter of global climate change. The original version of “Deep Down Things” mentioned environmental land-use planning, but I did not then anticipate how that focal concern would blossom into the global and fundamental issue of climate mitigation and adaptation efforts. As I have observed a new discourse and sensibility emerge from our contributors, I have gradually come to see that the politically paralyzing old canard of trees versus jobs can be set aside in favor of new models of a circular economy of recycling and reuse, decarbonized grids providing renewable sources of electric power, the recognition of the direct link between planetary health and human health and well-being, and, perhaps most of all, a new discussion of what the health and flourishing of life as such means directly, even viscerally, to the successful completion of the unfinished project of humanity.

A new day is beginning to emerge, at least in part, because a new scientific, moral, and political imagination of interdependence and mutual flourishing is pushing back against the old idioms of possessive individualism, the zero-sum society, extractive liberty, and a neoliberalism calling for the privatization, monetization, and commodification of everything. I believe that in its first fifteen years Minding Nature has made a significant contribution to precisely this kind of minding—discursive, self-reflective, and critical. I know that we will continue to follow oblique angles, travel roads rather than highways, welcome entanglement, and pursue the unfinished quest after fugitive deep down things.