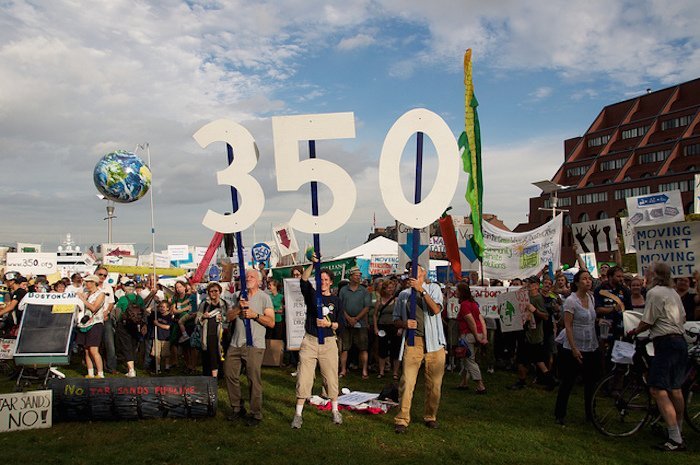 Only a powerful, visionary movement can save us from green enclaves for elites and misery for the rest.

At 12:57 a.m. on November 15, 2011, I got a text message reading, “Occupy NYC: URGENT … Eviction in Progress!” By the time I arrived, I couldn’t even see Zuccotti Park through the moving wall of riot cops. Yes—the filibuster is out of control, and partisan gridlock has seized Washington, DC. But North America’s deeper democratic crisis is its extraordinary inequality of wealth and power, with elites using their share to repress vigorous grassroots movements fighting to level the playing field. As Craig Calhoun, author of a first-hand account of the Tiananmen Square uprising, wrote after Occupy’s eviction, “It sounds melodramatic to say that democracy itself is at stake in the widespread moves to repress its main strategy of public demonstration. But it is true.”

This is the grim context climate activists confront. The stakes are huge. A dystopian eco-apartheid, where a privileged few find a way to hoard pleasant greenery and healthy food while the rest are exposed to dramatic ecological breakdown, lurks just around the corner. In comparison to the threat, the movement for climate justice is miniscule. Why?

Sociologists have shown that the social relations that cause climate change are so complex and diffuse, its impacts so apparently remote from its causes, that it’s hard for people to grasp the issue in both emotional and political terms. (Of course, the fossil-fuel-funded denial machine hasn’t helped either.) Flip this around and you get the North American climate movement’s central challenge: to organize and mobilize for a big fight against a large segment of the countries’ elites, and to connect the issue to ordinary people’s everyday lives and struggles.

On the fighting front, there has been progress. In the summer of 2012, Bill McKibben wrote a viral piece for Rolling Stone showing that petro-states and fossil fuel companies, if allowed to burn even a fifth of their reserves, would most likely cause runaway warming. “A rapid, transformative change would require building a movement, and movements require enemies,” he wrote. “And enemies are what climate change has lacked.” Now it has them. McKibben’s 350.org has since launched a mainly university-based fossil fuel divestment campaign that’s already caught on at over 200 campuses. 350.org is also into its second year of organized civil disobedience, targeting pipelines set to deliver carbon-rich Alberta oil to Gulf Coast refiners—and their coalition is growing. 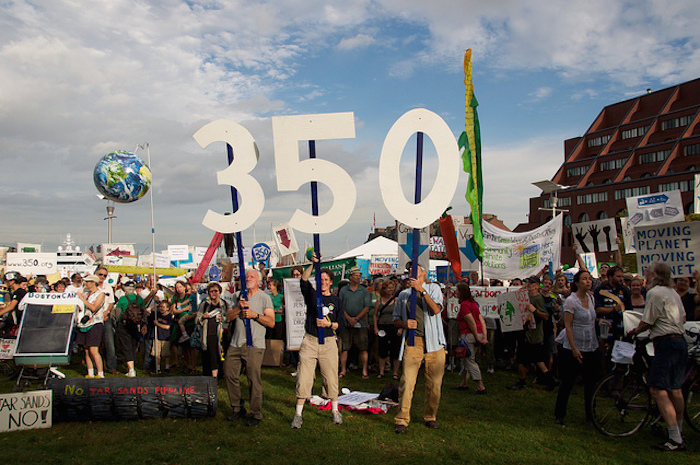 This is necessary work. Fossil fuels have to be kept underground. But it’s also now becoming clear that we can’t have all the energy we want just by cutting hydrocarbons and splurging on wind and solar. There simply isn’t time to build enough new capacity to meet projected energy use with renewables quickly enough.[1] Energy use will, at least in the medium term, have to face new limits; overall consumption growth must slow. It’s especially vital for wealthy North Atlantic societies to confront this fact: the alternative is to strip poorer countries of their citizens’ universal right to a decent standard of living. I’m convinced that we’re only a few years away from widespread recognition of this sobering truth. 350.org is on the right track—and so are those calling for a new green industrial revolution centered on expanding renewable energy, building mass transit, and retrofitting most buildings—to take three examples. But this program must also reckon with the deeper problems of limits to clean energy build-up. For instance, simply replacing gas-fueled cars with electric ones, all thirsty for clean electricity that doesn’t yet exist, isn’t an option.

The good news: several prominent intellectuals, like Juliet Schor, Tim Jackson, and James Gustav Speth, are already confronting this problem. In popular books, they’ve used real-world examples to show that we can tackle the remote abstractions of climate change and other ecological breakdowns by reducing workloads and increasing sustainable consumption. This is a promising start to the vital task of connecting climate politics to everyday troubles. The bad news: for all the power of their prophecies and feel-good stories, these authors haven’t managed, as 350.org has, to suggest a direction for confrontational political struggle. They rightly advocate equitable access both to energy resources and to the atmosphere’s common carbon sink. But as we run up to limits of each, we can expect those with the most to tighten their grip.

Rationing was a traumatic word during the Obamacare debate, though for Canadians like me, its effectiveness as a scare word was puzzling. Access to resources is obviously already rationed by income and wealth. Isn’t it better to ration fairly, according to need?

The deeper problem, however, recalls the classic structural dilemma described by Claus Offe and Helmut Wiesenthal in their 1980 essay “Two Logics of Collective Action.” They show that while capitalists maintain power and privilege simply by going about their business, workers face a steep uphill struggle against daily routine and bureaucratic dynamics to organize an even minimally effective union. The same holds for energy. Since access to energy, through consumption, is already rationed by income and wealth, elites are well positioned to win through an eco-apartheid scenario—either by riding out ecological calamity as best they can, or by keeping the biggest share of capped quantities of energy; this gives them extraordinary bargaining power. To bring about a relatively fair, democratic alternative, meanwhile, a mass movement would have to completely redesign society. We’re talking about overhauling agriculture and cities, producing fewer material rewards for (reduced) work for most of the middle class, equipping those with even less for a radically different economy in an already changing climate, and dramatically reigning in the massive consumption of the 1%. This represents, to put it mildly, an uphill struggle against entrenched interests and widespread public skepticism.

The technical details aren’t the point; there are intricate policy instruments available for almost any goal. The fundamental choices are political. Seventy years ago, rationing reigned in Britain and North America as they fought against fascism. The experience prompted George Orwell, in 1941, to write an essay proposing a democratic “English socialism” with a maximum ratio of inequality of 10:1. A few years later, in 1984, he explored the opposite scenario, where consumption was rationed by authoritarian violence, total surveillance, and urban enclaves of wealth and poverty. This vision soon seemed dated. The postwar economy, fueled by cheap oil, boomed impressively, and books like The Age of Affluence announced rationing’s definitive end. Scarcity was a residue; it would soon vanish. And perhaps one day it truly will—but not soon. On both global and local scales, an Orwellian age is coming. The question is, which one?

[1] For concise math explaining limits to clean energy build-up, see Roger Pielke’s The Climate Fix or his summary in Foreign Policy,where he shows that to achieve even the woefully weak target for atmospheric carbon dioxide concentration of 450 ppm by 2050, “the world would need to deploy a nuclear power plant worth of carbon-free energy every day between now and 2050.” (To be clear, I don’t endorse the solutions Pielke proposes.) Moreover, as climate scientist Ken Caldeira has recently shown, the warming benefits of renewable energy are not immediate, because clean power plants are built using dirty energy. It can take a decade or more for even wind or solar to produce carbon savings. Meanwhile, sustainability experts are in broad agreement that overall resource use must slow. In the long run, technological miracles are possible, even likely; but counting on a miraculous, low-pain energy transition in the next few years is foolish.