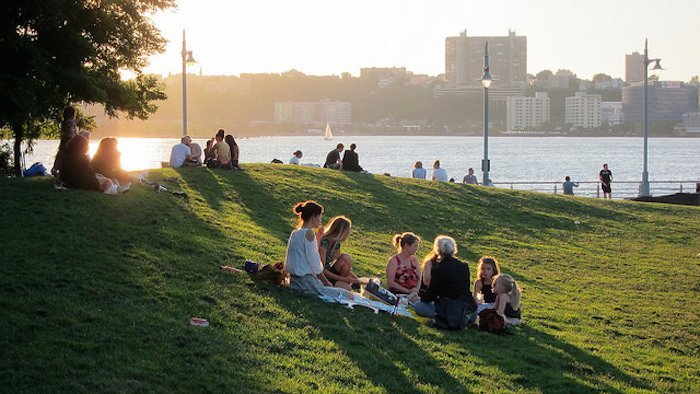 The ecological and democracy crises are essentially place-based. What “self-rule” and sustainability look like depend upon the history and aspirations of the people pursuing them in a particular jurisdiction shaped by ecological and institutional systems interlocked in time and space. My response to the question “Can democracy in crisis deal with the climate crisis?” is, therefore, located where I have spent the last twenty-two years living and working (and collaborating and agitating), the New York City metropolitan region.

Superstorm Sandy brought home the realities of climate change to the northeastern United States in a way that no scientific report had or could. It overwhelmed the physical infrastructure of coastal New Jersey and much of the twenty-two counties in four states that comprise the NYC metro area. While the city’s mass transit system bounced back with commendable alacrity, the power grid did not, and tens of thousands went without the absolute basics of food, water, and medicine.

This storm spawned by climate change painfully revealed the vulnerabilities of our physical infrastructure in the form of collapsed boardwalks, flooded houses, and overflowing sewage systems. It also revealed the inadequacies of and inequalities in our institutions in the form of ill-equipped power utilities, gas shortages, and uncoordinated emergency response. Yes, rich and poor, white and black, old and young suffered during Sandy. But as development proceeds, are we all truly in the same boat? Which voices will articulate the visions for a resilient New York City? Whose interests will guide redevelopment?

Infrastructure is a technical response to a social need in a specific environment. But how we construct and satisfy those needs flows from political choices. If we don’t dwell on the coast, then seaside flooding isn’t a problem. Indeed, some cities have removed housing and commercial operations from flood-prone spaces and replaced them with low-cost parks that provide wildlife habitat while absorbing floodwaters. Mayor Bloomberg stated that such a “strategic retreat” is not an option; we are “not going to abandon the waterfront […] we just have to build smarter and stronger and more sustainably.”[1] But how much more are we willing to devote to produce and maintain the infrastructure to keep the financial industry in Manhattan and redevelop the boroughs’ coast with high-end residential and commercial development? And, more pointedly, who, exactly, is this “we”?

What type of governance process can grapple with the immensity and immediacy of the challenge that is climate change? Across the globe, a tremendous array of socio-political experimentation has led to processes and policies that are redefining democracy by pursuing ecological sustainability through a framework that reduces economic inequality, promotes social inclusion, and cultivates democratic decision-making procedures that reclaim public goods and redefine them as “commons.” And this has been done with governments and businesses, in local neighborhoods and transnational coalitions, from the “food sovereignty” program formulated by 200 million peasant producers in La Via Campesina, to the deprivatization and social-public reclaiming of the water utility in Cochabamba, Bolivia.[2] In the remainder of this essay, I discuss the ways in which an inclusive and egalitarian budget program already at work in New York City could be used to collaboratively construct a model of democratic resilience.

Participatory Budgeting, or “PB,” is a process in which some part of a public budget is turned over to the people most impacted by that budget. It started in Porto Alegre, Brazil, in 1989 and has spread to more than 1000 cities across the planet. PB arrived in New York City in 2011 when four city council members agreed to turn over one million dollars each of their capital discretionary funds to the members of their district. In New York City, the process works as follows: as summer ends, community leaders do outreach and organize public assemblies to explain the process. At these assemblies, residents discuss their district’s needs and propose ideas to address them. In October, select residents step up to develop those ideas into full-fledged proposals. This requires working with representatives from the relevant city agencies to make sure that the proposals meet the city’s fiscal and technical criteria. For example, a proposal for a rain garden from residents of a public housing complex must be cleared by the housing authority and certified that it is legally and technically feasible at the specific site. If the proposal passes these tests, it is placed on a ballot that the residents of the district vote upon in March. The winning proposals are built by the city.[3] 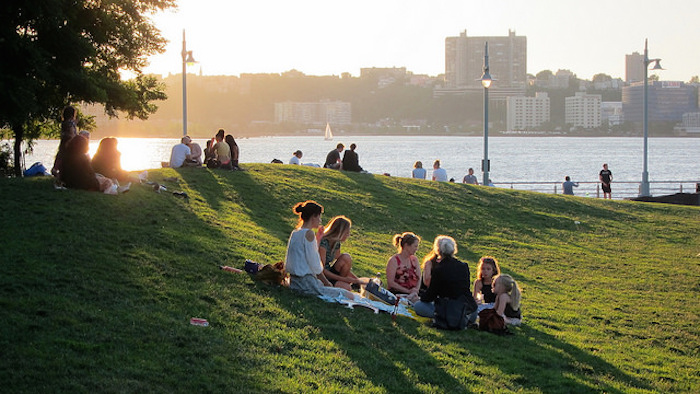 Although it is small scale in terms of jurisdiction and funds, PBNYC is well situated to address the democracy and ecological crises for several reasons. First, PB is not “consultation.” Because it is not, it attracts more people to the political process and fosters an atmosphere of transparency and accountability. The discussions are not “closed door” but truly public, and so is power itself: the community decides. Relatedly, PB displaces the power of lobbyists and political parties and reduces partisanship and patronage. This leads to a deliberative framework that reduces ideological divisiveness and gridlock, and instead fosters a deliberative atmosphere that is more diverse, inclusive, and egalitarian. This normative reframing also has major epistemological advantages, since more types of knowledge and imaginations are brought to the table as experts work alongside “amateurs,” and long-time residents with intimate knowledge of people and place brainstorm with recent immigrants who bring ideas outside of any given cultural or geographic box. (This kind of pluralist collaborative epistemology is especially crucial for dealing with ecological complexities.) Finally, though seemingly time-consuming, efficacy is often increased since the diversities just discussed lead to more intense scrutiny of proposals, thereby reducing the chances that a poorly thought out proposal favored by some unfairly influential group is pushed through.

In the case of Sandy relief and redevelopment, patronage and partisanship are unfortunately already in play: “pork” projects were included in the Congressional relief bill and a partisan fight delayed its passage. On the local front, Bloomberg designated the NYC Economic Development Corporation (an unelected public-private partnership) to oversee redevelopment planning. Its director named a Goldman Sachs VP to envision the infrastructure for the reconstruction of Zone A. Are these governance processes the right ones to address the daunting complexities of climate change, much less pursue a democratic “adaptation”? What is the alternative? Participatory budgeting offers another normative and procedural model. So, the process for creating a more just and resilient metropolitan region is not an unattainable dream. When we look at the mix of participatory democratic social, political, and economic experimentations happening across the globe—and the protests driving them—it is clear that elements of this process are in place and the process has already begun.