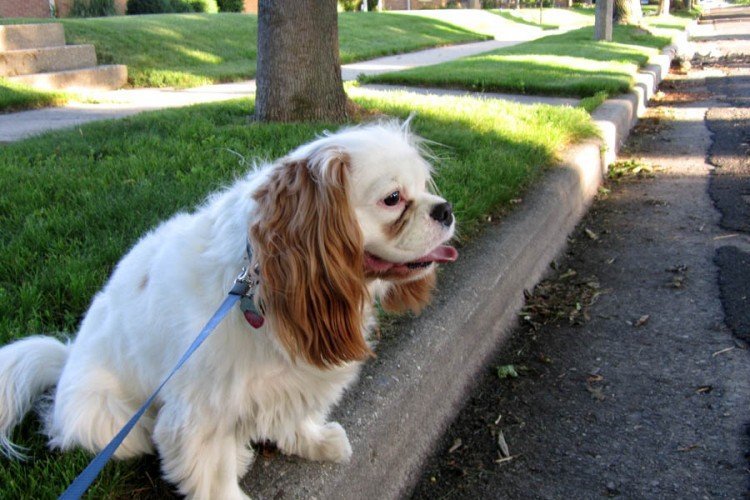 I once found the meaning of life in a seedy Chicago bar, in a worn medical dictionary someone had left on the counter (to settle arguments, maybe). In the very first paragraphs, it defined “life” in such lucid, coolly elegant prose it seemed like the actual meaning of life—especially after a couple of IPAs. I’ve never been able to find the passage again, so this is a gross paraphrase, but life, it said, is a self-sustaining, self-replicating set of organic chemical processes that maintains homeostasis by ingesting nutrients from the environment and excreting the unusable by-products. 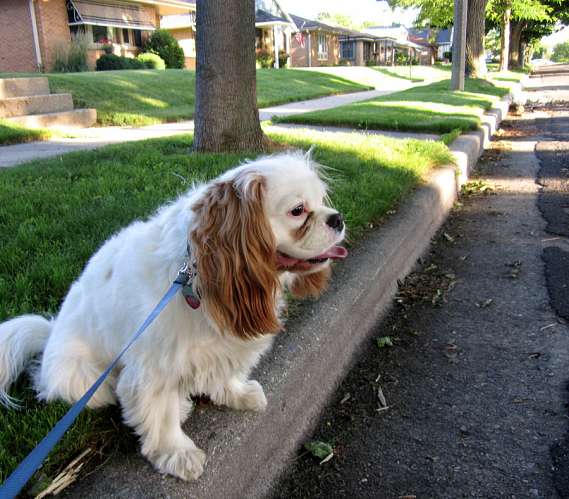 Now this describes perfectly accurately, as far as it goes, a certain dog of my acquaintance, a three-year-old spaniel named Barkley (he is crazy about food, and I’m well-acquainted with his by-products). But I can’t help thinking that the medical dictionary’s definition of life leaves out the best parts of him: like the sheer full-body joy he displays trotting along on a walk, jaunty as a fox, or breaking into a gallop, pink tongue lolling, long ears flying like pennants.

In a sense, Barkley is an artificial life form, a product of the dog-breeder’s art, to wit: a King Charles Cavalier Spaniel, a type created in the late 1920s to reproduce the silky-eared spaniels seen in paintings of English royalty. Technically he’s classified as a “toy dog,” and he’s pure, concentrated cuteness, as man-made as refined sugar. His genetic roulette-spin denied him the markings that would have made him fit for breeding: instead of the brown-on-white mask of the classic “Blenheim” Cavalier, he’s almost all white, with brown ears and two dark streaks under his eyes, making him look like a beanie baby with quarterback’s greasepaint.

By human standards, “Barks” is a Very Good Dog: sweet-tempered, clean, and cooperative (mostly). And for all his aristocratic pedigree, he’s held on to a surprisingly large share of his lupine heritage: when his siblings were lolling around their mother’s teats, eyes half-closed, he was scrambling over to the side of the pen to investigate newcomers, his three-inch string of a tail waving enthusiastically. He’s a natural athlete and explorer, so much a hunter that I suspect his ancestors served double duty as palace rodent control. When we play with a stuffed animal, he growls in what I’m sure he thinks is a terribly fierce way (I might have encouraged him by growling myself until he caught on). He always goes for the neck, and he will not let go; the very model of doggedness. When I toss his toy across the room, he’ll bring it back running, with a few vigorous neck-breaking shakes—I never taught him that. And even though he resembles a fluffy dustmop, when we play, I feel myself a part of an ancient tradition going back to the prehistoric campfires when humans first tossed their leftovers to the skulking wolves.

How ironic, then, that Barkley should end up in the suburbs of a medium-sized midwestern American city, with scarce scope for hunting or trailblazing. In our car-and-private-property-centered culture, I can’t let him rove unleashed, and even if I were so rude a neighbor as to let him chase rabbits into people’s yards, he’s just too fearless to keep from becoming roadkill. Such is life in the Anthropocene: an animal unfit for the wild, and an environment where animals need human supervision to survive.

I participate in his world most fully on our twice-daily walks. Over hundreds of hours, walking in autumn fog, spring downpours, ninety-degree heat and subzero cold, we’ve developed a comfortable modus operandi. 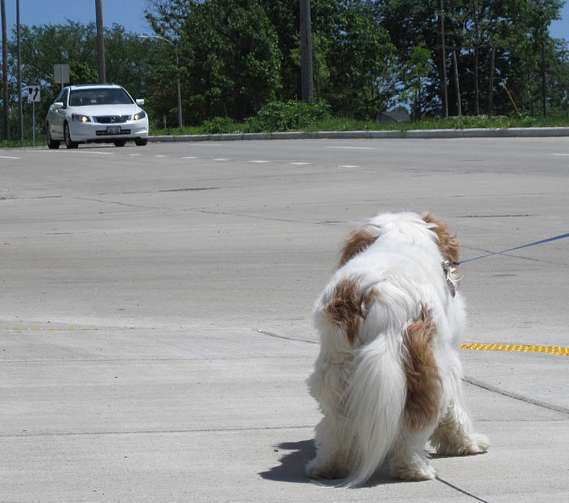 For a dog, the ground is the Internet: news, entertainment, and messaging in one medium. I let him sniff whatever invisible signs his keen nose finds most fascinating, and he (usually) moves on after a moment. Sometimes it’s a cursory whiff, followed by posting a quick chemical selfie; sometimes it’s deep snuffles accompanied by happy grunts; sometimes he’ll race back and forth excitedly over a square foot of ground, feathery tail flogging the air. His olfactory universe is an order of magnitude greater than mine; I can only imagine the rich polyphonies, the sonatas and symphonies of scents he experiences when he sits with his nose in the wind.

This has led to power struggles: he’ll want to read the ground like a scholar parsing a difficult text; I just want to keep our walk moving. But I try to let him gather enough smell-memories to compensate for the hours he spends indoors. Sometimes he’s mistaken my laissez-faire attitude for submissiveness and decided he’s the boss; but after a tense day or two asserting my human privilege, he gives in, seeming happy to follow my lead again. He makes discoveries: bits of fur, feathers, rabbit poop, confused June bugs, chicken bones likely dropped by trash-diving crows; once he dug up a frozen rat carcass from under three feet of snow. If he picks something up and heads home, I know he’s found something disgusting that I need to distract him from. I now understand why parents tend to become more conservative: you have to say “No” a lot.

Attuned to the moment his snuffling might turn up some unsavory object, my attention is inevitably drawn downwards: to muddy patches after rain brings out a carpet of rich new smells, along with the brown and white mushrooms; to the progress of sidewalk-crack weeds; to the different colors of yarrow; to the varieties of snow, from full-moon blue to sparkling champagne under the streetlights, with wonderfully crunchy sidewalk ice; to the arrival order of spring flowers: crocus, tulips, daffodil, iris. It’s on our walks that I’ve sighted the Peregrine falcon that roosts in a nearby shopping center; the young red-tailed hawk bullied by troops of garrulous crows, not to mention the gossipy sparrows, melodic cardinals, sweet-voiced doves, and insolent robins of the neighborhood. I relish the spicy scent of color-changing leaves, and their converse budding in the spring; that one warm day in June when all the trees burst into green at once.

Had Barks been a showdog, he would have spent long hours with a loop around his neck holding his head up, standing perfectly still, feet placed just so—no sniffing the ground! His brothers and sisters never learned how to tug on a rope; if you tossed a stuffed animal, they’d just look at you. By giving Barks liberty to chase down scents and play vigorously, I like to think I’m allowing his inner prehistoric wolf its due, and I hope this improves the quality of his life. I don’t want to pass judgment on people who take pleasure in molding little life-forms to their wills—but to me, his satisfied grunting when you scratch the back of his neck, his winsome smile when he’s about to get a treat, the complete intensity with which he stalks a nonplussed rabbit, or his pure doggy happiness munching a bone held between his paws—all these seem to me good in themselves.

Obviously, for me, Barks is more than “an organism.” When he nudges the leash or, holding my gaze, glances over at the treat jar, I know exactly what’s on his mind; I sense that there’s someone there; differently from when I talk with a human being, of course, but not fundamentally so. 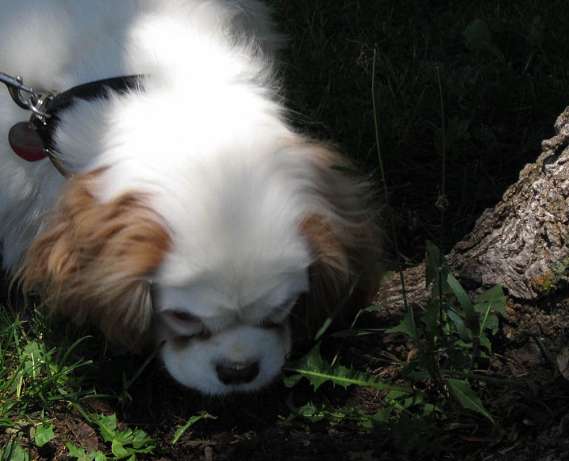 Is this just a confirmation error on my part? A neurological illusion, like the phantom hand I see in front of my face in the dark? Or the triggering of my mammalian instincts by a cute, needy creature, through the mysterious synchrony of mirror neurons? An evolutionarily adaptive propensity to feel empathy for creatures that need us? What is the anatomy of empathy?

I have no idea how animals’ DNA is supposed to activate specific behaviors in the environments they evolved (naturally or synthetically) to fit. But such an account, if it exists, would have to be strong indeed to convince me that Barks, as the eighteenth-century mechanists claimed, is no more than a meat machine, a bundle of predetermined instincts played out in nerve and muscle. I feel that he’s not just the traits of his breed— curiosity, gentleness, hunting instinct—he’s him. The rules of science are designed to make us question our intuitions, and very useful tools they are. But unlike Descartes, we don’t have to wonder if the people we see outside our window aren’t perhaps skillfully costumed automatons (science gives us no ultimate reason not to). I don’t think there will ever be scientific proof of personhood; it’s more likely a hybrid quality, somewhere in the misty borderlands between nature and art, fact and story.

“If a lion could talk, we could not understand him,” wrote Ludwig Wittgenstein (who was savvier than most philosophers about the seductiveness of intellectual clarity). He might have granted, though, that if there were any ground for translation, it would be in our shared bodily senses and the greater environmental settings in which they co-evolved. Wittgenstein also said: if we want to know what someone believes, look not at what they say, but how they live. Lots of folks think of their pets as members of the family these days (to a fault, maybe). I’m told some Native Americans speak, in a way accordant to the aboriginal way of life, as if animals were other kinds of tribes: wolf people, bear people, salmon people, even stone people.

Once you admit the possibility of animal “consciousness” (to use an unfashionable and contested term), it spreads like dandelions on a suburban lawn. If my little dog is, in some sense, a person—then why not the cocky robin, the bourgeois rabbits, or the very alert spider whom I discovered checking me out at my favorite woodland spot, just as I was saying to myself “there are no nature spirits here”? And where does one stop? Consider this naturally occurring metaphor: the common experiential location of empathy, the heart, sends life-giving oxygen to all parts of the body, as the empathetic heart distributes our feelings of care throughout the world.

Could we have the heart (cœur-age) to endow personhood on other loveable or awe-some things? What about trees, mountains, rivers, storms? Not to commit the pathetic fallacy—that they feel and think as we do—but to acknowledge that they are complex entities with complex relationships and their own integrity.* As ancient Greeks called nature spirits daímones, should we actively desire to live in a “demon-haunted world”? Is there any way that it could make good sense for us to entertain stories long-rejected by science, like animism, prana, chi, elan vital? And if we did pick up such archaic tools and fashioned them to our own needs—how would that change our way of life?

Are animals people? What I can say with confidence is: when you pay due attention, they certainly seem people-ish. And that’s quite enough philosophical weight for my fuzzy little friend to carry. 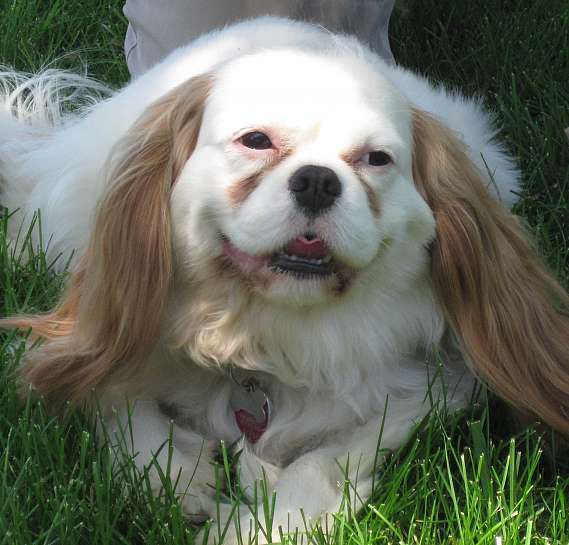 * I wasn’t going to go as far as granting legal status to a river—but that’s exactly what has happened in New Zealand. Thanks to Gavin Van Horn for pointing this out.

Photo credits of Barkley (top to bottom): first and second photos by author, third photo by Will Zuern, fourth photo by Susan Zuern.