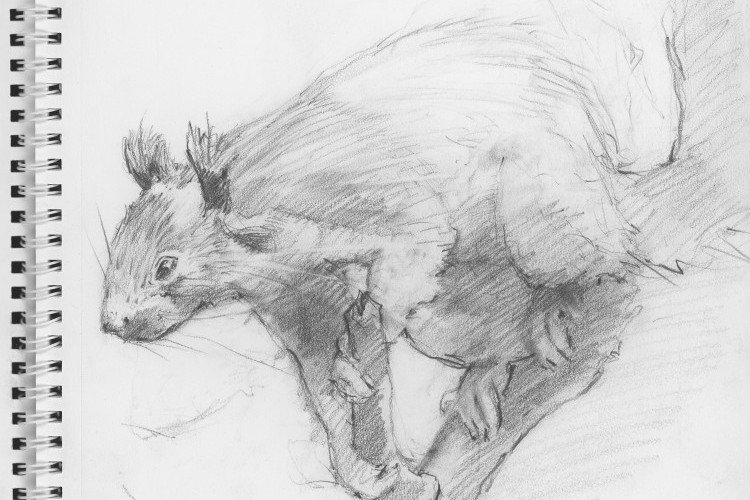 Drawing Animals at the Field Museum of Natural History

Ed. note – The author of this post, Julie Meridian, is an artist whose work will be included in the City Creatures book. She is also a teacher, who often focuses on animals in order to teach new ways of seeing and doing art. In the piece below, she shares the personal experience of drawing with her son, Benn, and offers some words of wisdom for those who would like to draw. Benn was moved by his mother’s reflections and, happily, sent us his own response. It is included here along with some of the illustrations he produced at different ages while drawing with his mother.

The light is dim and the halls are quiet, nearly deserted.  My young son and I breathe slowly and enter the stillness.

We are unsettled, spooked, surrounded by death.  In the shadows we can feel their eyes staring, almost hear them rustling, swishing, snorting, nuzzling, pawing, flapping, chirping, crying. We walk slowly, alert for signs, listening for the ones that seem to call to us, the ones that know our names. We have come to capture their spirits, to feel their presence, to learn the lay of their fur, the fall of their feathers, the arch of their necks. We want to own them, know them, become them, in the way that only artists can—by taking time, quiet and alone. Time to see.

He chooses the sharp edge of an ear. I choose the elegant curve of a back.  Then we begin.  Slowly our eyes move, following every detail of contour, every gesture of limb.  Slowly our hands move, following our eyes, capturing the lines on the page.  Sometimes the lines are good. Sometimes the lines stray and we begin again. But no matter—the lines are always magic. It is the act of drawing that makes us see. And it is the act of drawing that makes us remember. This is my zebra, my wild turkey, my crow. This is his rhinoceros, his antelope, his cheetah. We return again and again, throughout the years. The animals are always there, waiting for us to turn the page.

They are ours now, alive in us.

And we are theirs.

Notes About Getting Started With Drawing

A sketchpad and a pencil are all the tools that you’ll ever need for a lifetime of drawing.

I began making regular sketching trips to the Field Museum’s diorama exhibits with my son, Benn, when he was 10 years old (see Horned Puffin image, below). We continued off and on throughout elementary, middle school and high school. Each excursion yielded new discoveries and became a favorite way of spending time together. 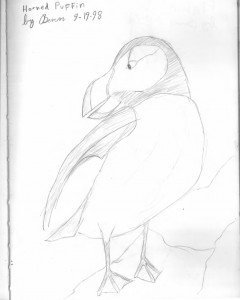 Each of us has an internal critic that I call the Judge—a voice inside that disparages any effort that is less than perfect.

In my many years of teaching art to children and adults, I’ve found that the biggest difference between creative people and not-so-creative people is a playful attitude—a willingness to suspend judgment and give yourself a chance to begin, a chance to experiment, a chance to simply let one thing lead to another.

Here’s a bit of magic that can help restrain an irritating judge: on the very LAST page of your sketchbook, draw a box—a sort of trunk, wrapped with chains and locks. Maybe add a few sharks or monsters to guard the box. Then imagine putting your judge in the box.  Lock the locks! Close your sketchbook. Now turn to a new page at the beginning of your book for a fresh start. Oh, your judge might gripe and complain for awhile, but pretty soon he (or she) will settle down and you can draw in peace (the box works for kids and grownups, too).

It’s a myth that drawing ability is a rare inborn talent or the product of divine inspiration.  Anyone can draw. Really. Anyone.

The secret to drawing is not in your hands or even in your mind. The secret is in your eyes. If you can see it, you can draw it. But artists do practice a special kind of slow seeing—not a quick or casual glance, but a very attentive, deliberate, savoring, inch-by-inch kind of seeing. Try to keep your eyes on your subject, rather than on your paper, and trust your eye-hand coordination to guide your hand as you draw. 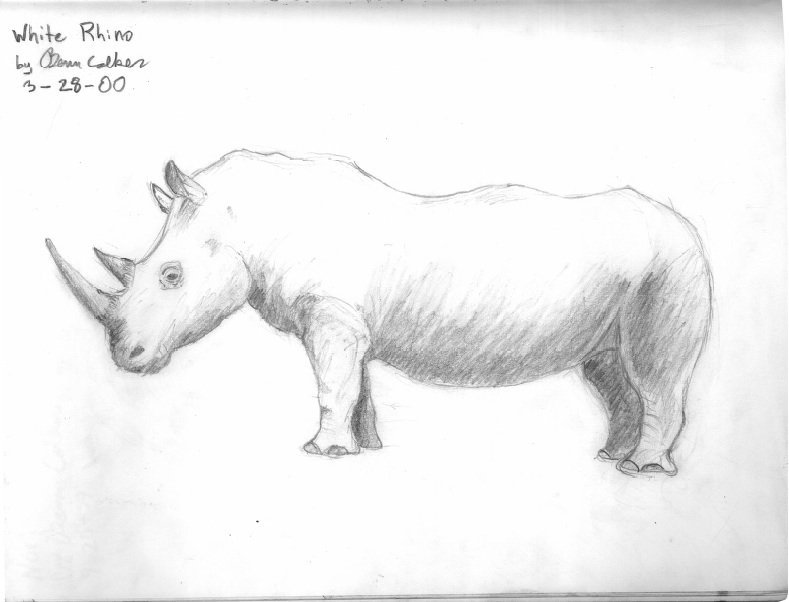 I do believe that animals speak to us, to our own wild, mysterious animal spirits. As you roam through the taxidermy exhibits in the museum, listen for an inner voice that seems to beckon you to one particular animal. Then spend some time quietly looking at the animal before you begin to draw. Study it from different angles. Get up close. Focus. The great thing about taxidermy animals is that they hold still and don’t mind at all if you stare at them.

When Benn was young, I suggested that we start with birds. First, we looked at their basic shape: pointed beak, curved neck, widening to a sort of oval body, then narrowing to the tail. Next, we zoomed in on our favorite details. Benn chose a puffin, a very appealing bird with a simple shape and distinctive pattern. He concentrated on drawing the bird’s outline first, looking slowly and carefully, paying special attention to the beak and feet. Then he added a few interior details. 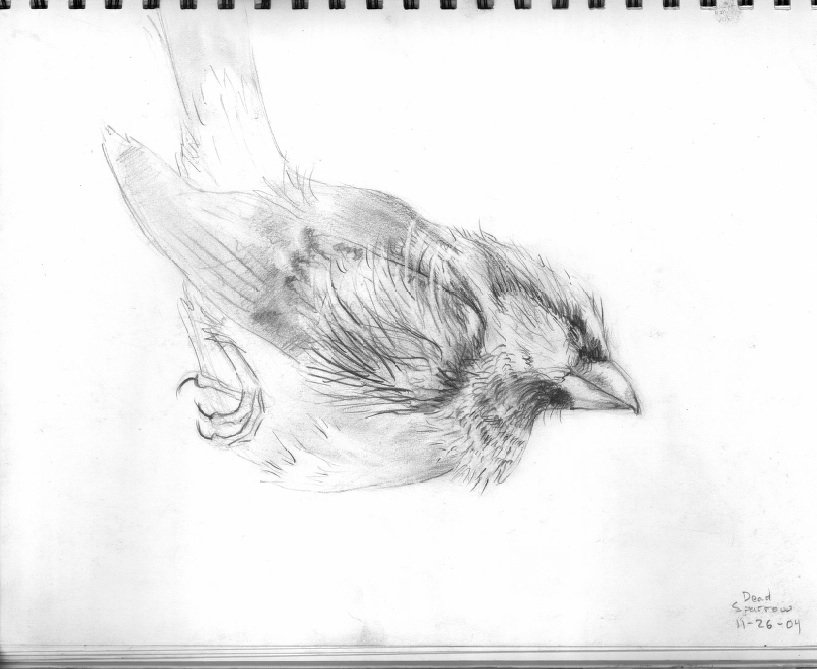 If you feel a bit overwhelmed by the amount of details that you see in your bird (or other animal), then draw just a part of the bird—just the head, just a wing, or even just a single feather. And you don’t need to include every detail that you see. Perhaps concentrate your details in one especially interesting area and leave the rest of the bird as an outline.

Our relationship on our sketching trips was very much one of drawing partners, not parent-child or teacher-student. Although I always worked near Benn, I never drew the same animal that he selected. Other than a few “slow seeing” reminders in the beginning, I tried to refrain from offering instructions, except for the rare times that he asked for suggestions (such as, “How do artists add shading?”). We avoided competing for “best puffin” and instead celebrated each other’s unique challenges and discoveries.

Our goal was not to become great artists, but to become great observers. Of course, as our observation skills grew, our drawings also improved. And in time, we simply felt more comfortable with the natural flow from eye to hand to line. 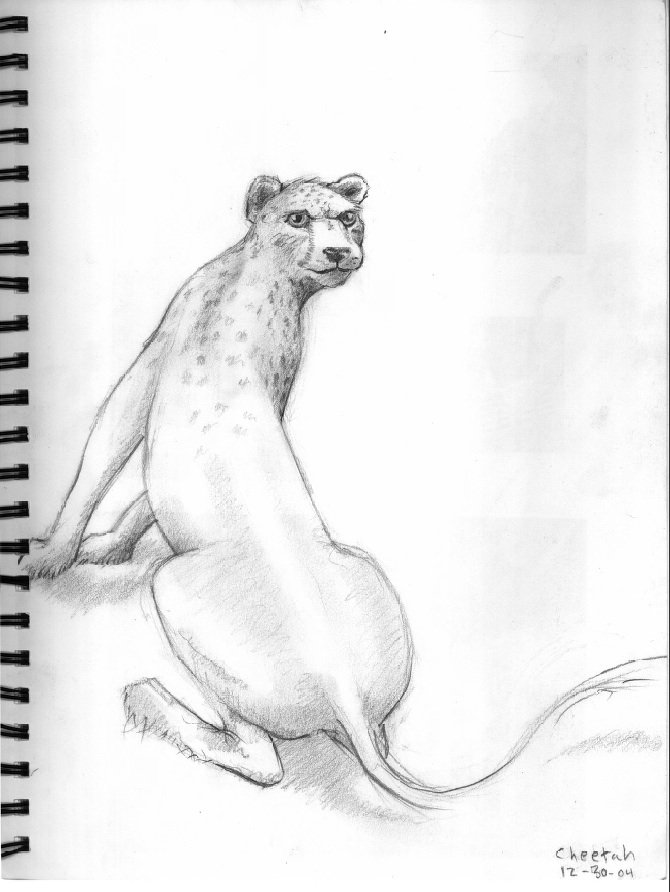 There are many books that tell you “how” to draw, but Benn and I simply looked for drawings that we loved and immersed ourselves in them. We were both inspired by the beautiful animal drawings by the museum’s artist in residence, Peggy Macnamara—several of these are exhibited in the museum. We also developed a passion for the eloquent drawings of Andrew Wyeth, studying his use of line, shadow and composition. And of course, we were in awe of drawings by the great masters of the Renaissance. Benn was reassured to learn that even Michelangelo and daVinci practiced by drawing many studies of hands, heads, ears, and so on, giving Benn the boost that he needed to practice drawing things that he found difficult or challenging.

Through the years, Benn’s sketchbooks became a source of inspiration for other projects. His rhinoceros became a clay sculpture, his antelope became an Art Deco design, his seagull wing became the metal wings of a mechanical bike/sculpture. He also began drawing from life, especially pets and human figures.

Today, at age 25, Benn continues the habit of sketching, as a natural extension of his attentive way of seeing and as a means of capturing his observations in memory. His interests have expanded to architecture and three dimensional design, but his sketchbooks remain an essential tool for collecting inspiration.

And before long, it will be time for me to begin drawing animals at the Field Museum with a new generation. My granddaughters, the children of my son Stephan, are now ages 3 and 6. Our 6 year old Ella already shows the attentive eyes of a great observer!

It is where my mother taught me to see and how to make what I see my own.

It is the birthplace of the line—my line—where I watched in astonishment as my hand found a voice beyond my control.

It is where these animals—these involuntary, yet gracious participants—let me get close enough to feed my fascination.

It is where these animals became my friends and where they stand now, eternally waiting for my return.

It is where, through seeing and drawing, I have been able to hold the wondrous and mysterious forces of life, for a moment, in the palm of my hand.

It is a gift for which I am grateful. 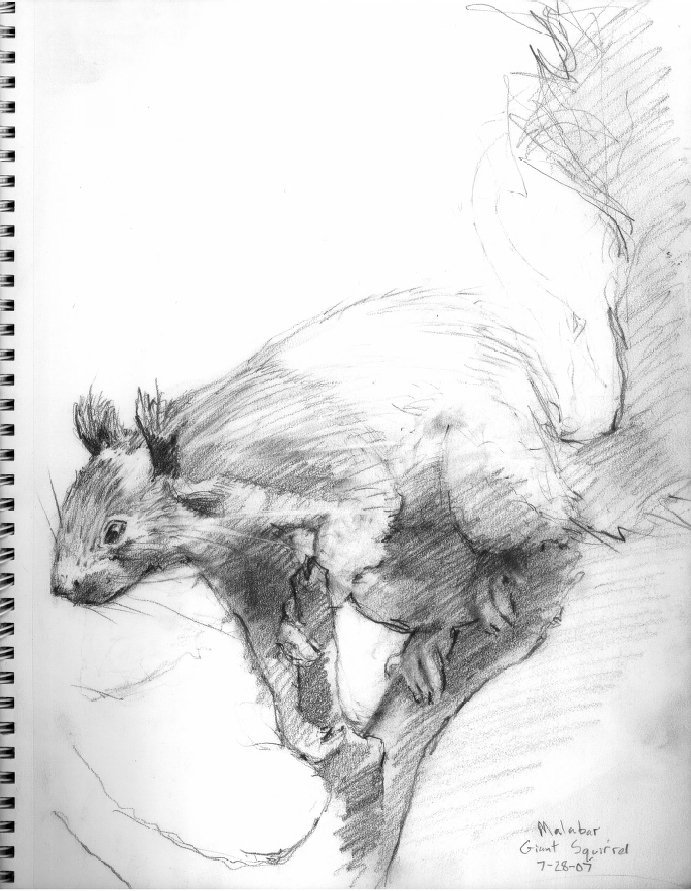 Throughout my time during and since architecture school, I have indeed found this type of drawing—drawing as an extension of seeing—to be an indispensable design tool. It has shaped how I take in my surroundings and translate these observations into consumable inspiration. It has allowed me to bring new, abstract ideas into reality with accuracy and ease, and to work through them, and present them in effective ways. 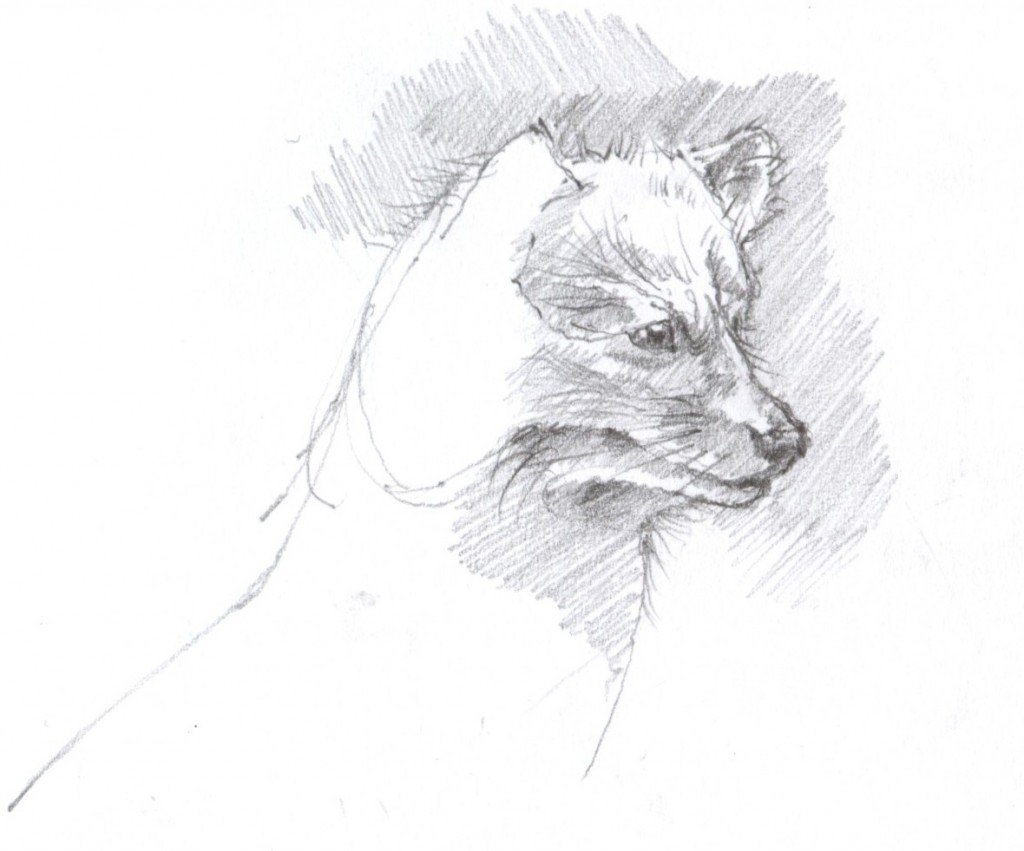 But even beyond its value as a tool, drawing (and especially drawing animals) has remained a soul-soothing endeavor. Sometimes the drawing becomes an exercise in creating a methodical, accurate version of what I see. In this case, I spend a great deal of time looking back and forth between the animal and the paper, refining every line to match the subtle nuances of the animal’s form. However, in recent years I have greatly enjoyed drawing animals by looking at the page infrequently and letting my hand run away with the information my eyes provide. The result is a drawing that is informed but not explicitly tied to the animal. It is more a document of our connection.

Drawing never ceases to amaze me. As my mother described, it still seems like magic. More than anything, drawing animals has been a profound joy—the joy of learning their intricacies and having created something beautiful. 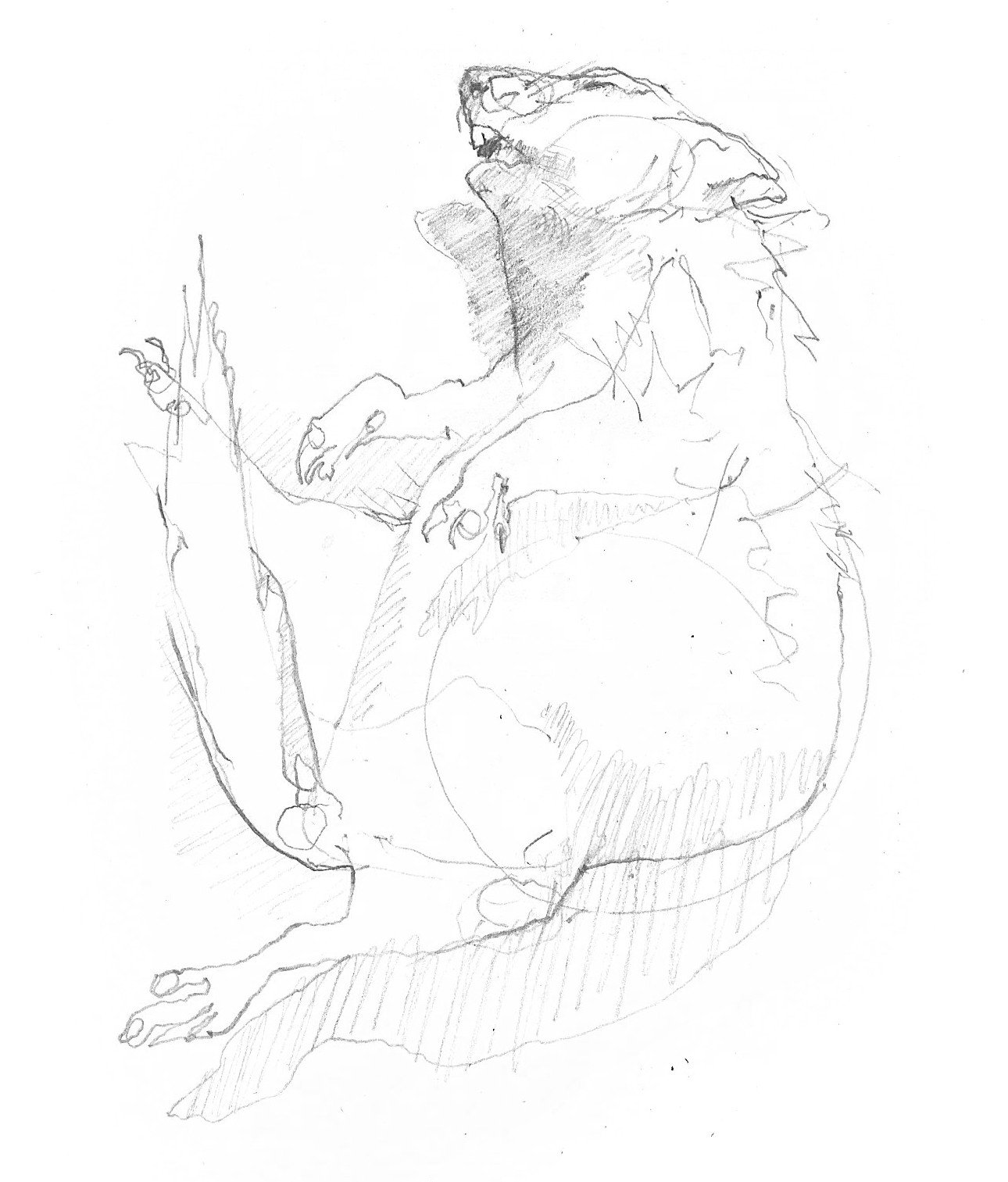