I am Potawatomi, part of the larger Anishinaabe indigenous people in North America. In the contemporary Anishinaabe world, the concept of responsibilities is very important.

Consider wild rice (manoomin) and Anishinaabe communities. Many Anishinaabe communities live where they do in the Great Lakes Basin because their ancestors were given spiritual guidance to cease migrating from the East when they reached the place where food grows on water (manoomin). From that time on, the rest is history. Today, stewarding and guarding manoomin involves many responsibilities. There are responsibilities for teaching younger people capacities to respect, care for, harvest, understand, and prepare manoomin; responsibilities on the part of younger people to learn the skills and teachings regarding the plant and to participate actively in family life; responsibilities associated with conducting and participating (appropriately) in ceremonies that honor the close connections between manoomin and Anishinaabe society; responsibilities of committees, such as “ricing committees,” that are accountable to the community for maintaining flourishing subsistence economies.

Taken together as a web, all these responsibilities constitute important aspects of the very meanings of family, friendship, trust, character, intergenerational relations, identity, and accountability in many Anishinaabe communities. Manoomin also has responsibilities. Manoomin is responsible for nourishing humans. Manoomin is considered a living being with a spiritual character all to its own. More importantly, manoomin is one of the sources that bring people together into the relationships of family, friendships, trust and so on. Manoomin motivates these things, which is why Anishinaabe people respect it as a living being with a spiritual character. So manoomin stewards and guards us too. Philosopher Robert Figueroa has tried to evoke the rich significance of such webs of responsibilities with the idea that they are living “environmental heritages” that motivate environmental stewardship and guardianship. [2] 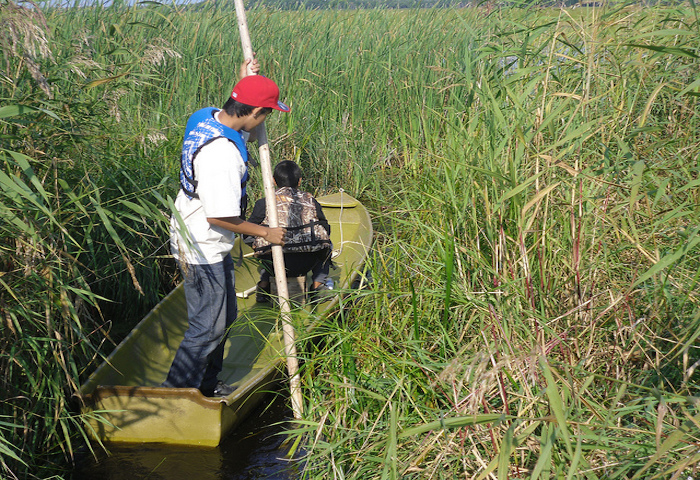 Manoomin also provides a perspective for glimpsing intricate webs of responsibilities that involve more living and non-living beings. Manoomin depends on the quality of water (nibi). Nibi is considered a major force of life. Anishinaabe scholar Deborah McGregor writes that “water supports (plants/medicines, animals, people, birds, etc.) and the life that supports water (e.g., the earth, the rain, the fish). Water has a role and a responsibility to fulfill, just as people do.”[1] Many Anishinaabe women today dedicate themselves to watching out for nibi because Anishinaabe women have persisted in doing so for generations. These persisting responsibilities link up with species like sturgeon (nmé), who often have stewardship responsibilities of their own for protecting manoomin and fisheries, and much more.

Such questions are not new to Anishinaabe communities, who continue to have to address problems stemming from industrial pollution, overexploitation of resources, climate change, and irresponsible research practices, all of which threaten to degrade manoomin, nibi, nmé, and many other relatives. Many of these problems are also associated with racism, ignorance, and oppressive politics that disempower Anishinaabe people and their governments from being able to advocate for policies that support Anishinaabe environmental stewardship and guardianship. To respond to these challenges, Anishinaabe communities are finding ways to motivate “emerging” responsibilities in addition to the “persisting” responsibilities they already have. They are forming alliances with other groups and governments to protect manoomin, nibi, nmé, and many other relatives, and prepare for climate change; they are integrating Anishinaabe knowledges with scientific research and teaching scientists to be morally accountable to Anishinaabe communities; they are taking political stands in state and federal venues to protect Anishinaabe lifeways; they are creating more appropriate rights frameworks and political relationships at the local, national, and international levels, such as the United Nations Declaration on the Rights of Indigenous Peoples. These are all new relationships created through efforts to motivate responsibilities that can address today’s ecological challenges.

There are many examples of emerging responsibilities in the Anishinaabe world. The Little River Band of Ottawa Indians Lake Sturgeon Program seeks to restore sturgeon populations in the Big Manistee River watershed in Michigan, which are on the decline from historic overharvesting from newcomers, dams, and environmental change. The Band’s program is based on building relationships among government, non-profit, and community partners in the watershed and integrating scientific and indigenous knowledges of sturgeon/nmé. Part of relationship building in the program involves creating new relationships among the diverse people and organizations in the watershed. The new relationships become stronger as the members of the relationships realize their own responsibilities to sturgeon/nmé. In its annual and public sturgeon release ceremony, people from all ages and walks of life in the watershed get to personally release young sturgeon into the river. At the tenth annual release I attended, participants noted that because of this program, people all over the watershed, according to their own ways, are seeing that it is people who depend on sturgeon/nmé, not just the other way around. The fish have the power to heal and create new relationships among people.

The Lake Sturgeon program gets at what I understand by the concept of “convening responsibilities.” The phrase “convening responsibilities” means taking one’s place as one of the forces that move webs of responsibilities into action. Though the Lake Sturgeon Program may have been among the original conveners of greater responsibilities in the watershed, the new participants also become conveners as they work together to create collective action. Many Anishinaabe initiatives model what it means to convene into action both persisting and emerging webs of responsibilities, like the Mother Earth Water Walk, which since the early 2000s has gone from just a few Anishinaabe women walking around the Great Lakes to many Anishinaabe and women of other heritages walking around bodies of water across North America. Anishinaabe people have taken leadership in efforts like the Nibi and Manoomin Symposium in Minnesota that seek to engender accountability in research institutions, private industry, and state government toward indigenous peoples.