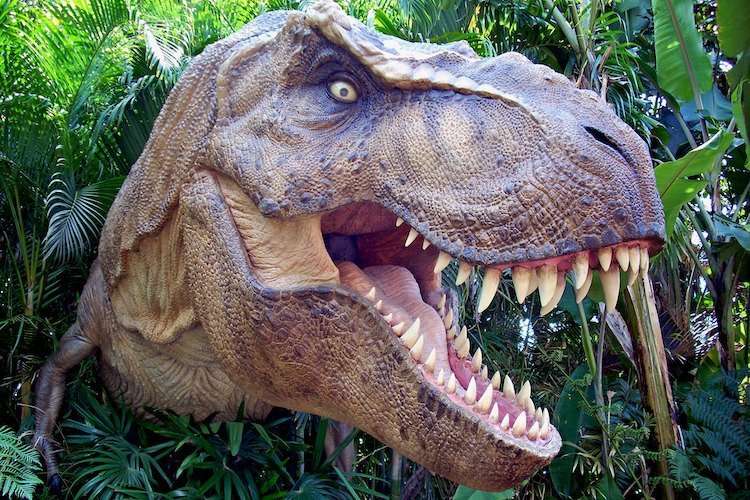 Ed. note: The Spring Creek Project’s latest series, “Music to Save Earth’s Songs,” is a wonder. The project combines stories and songs about endangered, threatened, and extinct species featured in philosopher Kathleen Dean Moore’s new book Earth’s Wild Music. Twice a week, an author—accompanied by a musician—will read a 500-word species-specific excerpt from Kathy’s book. From the sapsucker to the spadefoot toad to the sidewinder, a wild range of musics is offered. We at the Center for Humans and Nature were asked if we would like to feature a species. Tyrannosaurus rex was suggested. Um, yes, please. We happen to have one of the more famous T. rex’s in the world at Chicago’s Field Museum (or, technically, her skeleton), the affectionately named Sue. Like the Field Museum, the following piece invites us into deep time thinking. What was here in our now-urban landscape during the Mesozoic era? What creatures roamed the land when it was utterly different, tropical even? And as this piece asks, stretching our aural imaginations, what did that world sound like? It’s a wonder-filled exercise to sink deeply into the possibilities of the earliest planetary musics. As Kathleen puts it, “What the story of the dinosaurs tells me is that if the Earth didn’t have music, it would waste no time inventing it.”

Did dinosaurs sing? Did those swampy, ferny forests ring out with choruses of terrible, barrel-chested tenors? Did the velociraptor hunt the steamy sky, screaming? Did the little mammals warble warnings, as they scurried into cypress roots? Did the brontosaurus mother murmur to her new-hatched eggs? What a teeming, singing wilderness that must have been, all those species thumping around, tuning up for the next millennia. Or so I thought.

Of course, dinosaurs sang, I thought. They are the ancestors of the singing birds and cousins to the roaring crocodiles. They are the progenitors of the music the animals make; they are the Greek lyres of the animal kingdom. Of course, dinosaurs sang. What clinched it for me was the feathers. All along, I had envisioned dinosaurs as grey-scaled or thick-skinned creatures, naked and wrinkled as elephants. But new, microscopic examination of fossils shows that they were splendid in colorful feathered capes and plumed head-dresses. The first time I saw a drawing of a Tyrannosaurus rex with a thatch of grey feathers on his head and down his back, my eyes were as astonished as his. Peacock blue-tailed, red cockaded, green-masked, striped and spotted; they were magnificent. If dinosaurs had evolved colors to defend territories and attract mates or—who knows why?—to show off, then of course they would have sung.

That’s a comedown. But that doesn’t mean they didn’t make any noise. Maybe the forests didn’t ring out with warbles, but they were raucous with animal sounds. If dinosaurs couldn’t make music with their throats, they could still shake the heck out of the air. Some dinosaurs blew air into their closed mouths and through nasal cavities into resonance chambers, which we see in fossils as bony crests. They made the forest echo with clear, ominous tones, eerily like a cello. How do I know this? I have heard it, in recordings scientists made of the sound they produced when they blew air through crests constructed to mimic lambeosaurs’.

Some dinosaurs hissed through closed teeth. The air rang with not only the heavy thud or quick scramble of clawed feet, but also grunts and groans, chirps and rattles, or other “closed-mouth vocalizations,” as scientists call them, emitted through the bulging neck of the skin. The diplodicus whipped its tail at supersonic speeds, cracking the air.  I was just getting used to all this, when I learned that some dinosaurs cooed to their mates. Like doves.

And now, get this. Turns out that even if dinosaurs didn’t sing, they danced. “We know [that members of the family of Tyrannosaurus rex] had feathers and crests and good vision,” paleontologist Martin Lockley said. “They were visual animals, but there’s never been any actual physical evidence that their anatomy and behavior was co-opted for fairly energetic display. This is physical evidence.”

The evidence he refers to is vigorous scrape marks found in groupings in 100-million-year-old Colorado sandstone. From the courting behavior of ostriches and grouse, scientists envision the dinosaur males coming together on “leks,” or courting grounds, bobbing and scratching, flaring their brilliant feathers and cooing. Imagine: huge animals, each weighing more than a dozen football teams, shaking the Earth for a chance at love.

I can imagine this—in a lesser kind of way—because, hidden behind a log wall, I have watched a football-sized bird boom and dance on its lek. It was the greater sage-grouse over in the Oregon desert, on a late winter, snow-scoured, pre-dawn expedition when I thought I could actually freeze to death. Dinosaurs with or without feathers would have expired on the spot. But the birds were spectacular. Grubby little brown, specked birds most of the time, on the lek, they bloomed. Their tail feathers spread into a pointy-tipped fan, revealing white-spotted feathers on their rumps. They draped their wings down over their legs. They shook the feathers around their necks into a fluffy white boa. Then, the boa parted as their chests swelled, exposing two big sacs like yellow breasts. Unlike any breasts I have ever seen, these sacs expanded and collapsed, giving out a loud boom. Sort of like boomp, boomp, ba boomp ba. Attracted from miles around, dowdy females wandered over the lek, acting unimpressed, like the pig judges at the 4H county fair. The males scratched the ground bare. Scale this up to dinosaur dimensions, and you sort of have what scientists envision.

What the story of the dinosaurs tells me is that if the Earth didn’t have music, it would waste no time inventing it. And invent it, it did, with eager abandon and infinite creativity.

Birdsong evolved about 67 million years ago. Now, the whole Earth chimes, from the bottom of the sea to the limits of the atmosphere. Eighteen thousand species of birds, five thousand species of frogs, 87 million species of insects, 76 species of whales, each with its own chirp or song, and endless variations. And more songs are being created each year. The humpback whales in a given region sing in unison, a simple song that grows more complex as time passes. But at some point, they abandon that song and start a new melody, teaching it to others as they migrate. American robins learn their songs by imitating their elders, but after they leave the nest, they invent and improvise as freely as Ella Fitzgerald. The new songs of the magpies in Australia weave in the sirens of fire trucks, as wildfires rage. The whole planet sings.

Now, in the Cenozoic spring, a song sparrow raises its beak and throws its song to the sky. Dee-dee-toodle oodle oo. Human ears are built to hear its music. We hear most acutely in the range of 2.5 megahertz, which is the peak of birdsong. Human speech is pitched much lower, one kilohertz or below, and so is less central to our hearing. Why is this? Acoustic ecologist Gordon Hempton surmises that our bodies evolved not for cocktail party conversation but rather to harvest sounds from wild creatures. These are the aural signals on which our species success depended: Birds chatting, unconcerned. Herds gathering. Corvids flocking. Sudden silence. They spoke clearly: Here is safety. Here is water. Here is food. Here is danger.

But that’s just the beginning of the meaning we harvest by listening. Victor Hugo reminded us that “music expresses that which cannot be said and on which it is impossible to be silent.” Listen. Breathe Earth’s wild music into your body. You are not alone. Here is the harmony of which you are a part. Your joy is the exhalation of birds. Your fear is the pounding of hooves. The depth of your feeling is the depth of time. Your longing is a spring chorus of frogs, “the wordless voice of longing that resonates within us,” as Robin Kimmerer wrote, “the longing to continue, to participate in the sacred life of the world.”