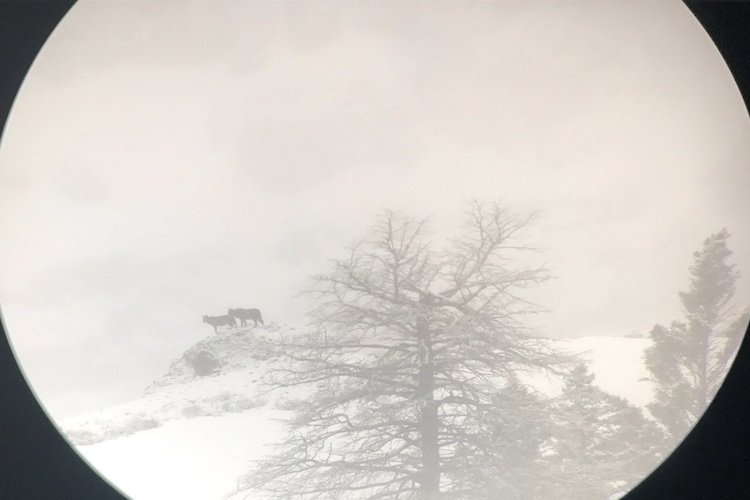 Few cities in the United States are as thoroughly and deeply connected to lush wild spaces as Chicago. While the city is endowed with an unrivalled forest preserve system, industry and topography have also served to maintain Chicago’s deep connection to the natural features that have long made the location a precious crossroads for humans and other species alike. With crossroads, however, come potential conflict.

Urban wildlife rehabilitation clinics regularly bear witness to, and attempt to mitigate the hazards of, urban living for wild creatures. For several years, I have volunteered in the clinic at Willowbrook Wildlife Center in DuPage County. While each patient we treat represents another chance for humans and other species to successfully coexist, some patients jostle one’s heart a little more profoundly than others. One of these was the tiny coyote pup who arrived one recent summer morning, one of those first truly warm days of the season. She was suffering not only from mange, which is unpleasant but treatable, but—more concerningly—from parvovirus, a frequent killer of young canines and felines. While being given fluids and undergoing testing, she was kept in a quiet area to minimize her stress, so it wasn’t until several hours after she arrived that I actually saw her. In the midst of flying through my end-of-day treatments, the sight of her stopped me cold and I felt my stomach drop.

The antithesis of what a pup should be, she was. Quiet—too quiet—and so, so, thin. Her fuzzy puppy coat was missing in places, the follicles disrupted by the mange parasite. She wasn’t able to keep anything down, so subcutaneous fluids were necessary to maintain hydration levels. And yet she was trying. She was lifting her head. She couldn’t quite get up, but she wanted to.

I see dozens of animals at death’s door each year. Each one is hard—why did this tiny pup feel different?

And then it hit me. We don’t get many coyotes (we usually place them with specialists), so this was the first canine I’d seen in this kind of distress since 949M.

August 2017. In Yellowstone’s Lamar Valley, the bison rut is in full furor, providing visitors a daily view of life-and-death heavyweight fights. Grizzlies and coyotes spar hourly over late summer’s abundant feasts. At the far end of the valley, amidst this ubiquitous activity, some of us watch not the amorous violence of the prehistoric bulls, nor the raucous contention of the scavengers, but one solitary black wolf, lying nearly motionless in high grass. High drama, in this vigil, is a head raised, a foot moved, a breath taken.

Many Yellowstone visitors recognize the iconic importance, the inherent power and beauty in any wolf. They will watch wolves so far away that they could easily be bison, bears, or (so frequently) rocks. They will watch wolves who deign to reveal only an ear or a tail above the deep sage. They will, yes, watch wolves merely lying in the high grass, which is what wolves seem to do more than anything else.

So, they watch this wolf. Black, with grey muzzle and sides, fur glossy after having survived a nasty battle with mange. Lean, but with lines more primitive and powerful than any domestic dog. Those who watch feel awe, attraction, and possibly a little bit of fear, despite the laconic appearance of this wolf.

What transforms this, however, from an experience of seeing “a wolf” to that of seeing an individual—with a story, with a personhood of sorts, with a life we can relate to—is the fact that Yellowstone’s wolves are the most closely studied in the world.

And for this reason, we know this is not “a wolf,” interchangeable with any other. 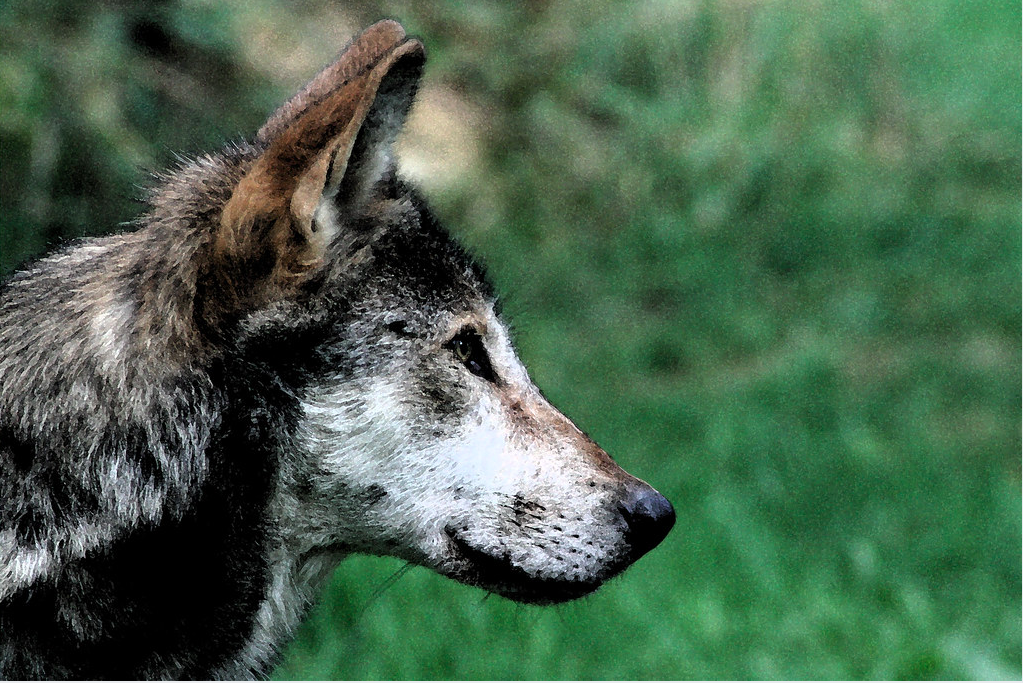 This is 949M (his radio tracking collar number).

The alpha male of the storied Lamar Canyon Pack, the park’s most beloved and most watched.

The territorial and genetic legatees of the legendary Druid Peak Pack, the largest in recorded history, the Lamar Canyon Pack is a small group but fearless and deadly effective. 949M arrived as a literal outsider, born beyond the park’s boundaries to the Beartooth Pack in 2011. In late 2016, he won the allegiance of tough little alpha female 926F, daughter of the famous 06 Female (called the most famous wolf in history), great-grand-daughter of “Superwolf” 21 and his mate 42, possibly the most documented wolves in the world. 926 is an exacting matriarch, rebuffing wolf after wolf who have had the temerity to seek Lamar membership. This, perhaps, is one reason the Lamars number only four, all black: 926, her daughter, a subordinate male, and her current (sixth) mate: 949M.

I had the great good fortune to follow this pack’s movements from dawn to dusk for a month, working for the National Park Service’s Yellowstone Wolf Project. During the annual winter study, a ground crew follows each pack in the Northern Range, tracking them with telemetry and spotting scopes and documenting all visible activity. My teammates and I spent over 300 hours observing or seeking the Lamars, witnessing spectacular hunts, and the latest-season tie (breeding) in Yellowstone wolf history, courtesy of 949 himself (mere minutes after bringing down a massive bull elk).

It is, therefore, a great privilege to be present in Yellowstone five months later, this particular week in August.

Because 949 is not merely lying there in the tall grass. 949 is, almost surely, dying.

In July, his signal began to be heard separately from his mate’s. No one visually observed him for over two weeks, until the day he appeared in the tall grass. A week ago.

It is no mystery what drew him here—a huge bull bison carcass, victim of the savage love that is the rut. But his presence at the carcass is nearly the only thing normal about his behavior.

He’s lean—even leaner than expected for a wolf of his venerable age (6 years). His eyes run. He walks stiffly. Most concerning of all, he wobbles when he moves. He doesn’t so much lie down as collapse.

His appetite was good when he first arrived at the carcass. The bull fell at the confluence of the Lamar River and Soda Butte Creek, so there’s a ready water source. The larger Junction Butte Pack has been roaming only a mile or two west, but 949’s bison carcass is quite close to the road, and the traffic appears to dissuade members of the Junction Pack from approaching. It would be a good place to convalesce, and Yellowstone Reports editor Laurie Lyman poetically calls the bull the equivalent of “chicken soup” for 949.

But as we’ve watched—five days now—it’s become clear he is not convalescing. His movements have become shakier. He seems to be getting little nourishment despite feeding. He’s gotten up less frequently, and now as we watch on the fourth day after his arrival, he’s been in one spot for eighteen hours.

But for the moment, the coyote and bears who’ve been sharing the carcass are still properly afraid to approach 949 too closely. He can still lift his head when they walk by. He is still a wolf.

The hillsides in Lamar Valley are social spaces. Instantaneous communities blossom in the sage, as more experienced watchers share scopes with visitors who have brought only binoculars, as yesterday’s novices bring others into the group. Someone suggests ways to distinguish a wolf from a log. We strain our ears to catch anything the Wolf Project staff say. We often screw up. And our self-deprecating laughter further creates community.

And if—when—people ask, we share not what but who these wolves are. I’m no wolf biologist. But I have learned from veteran wolf observers, like Rick McIntyre, that it is stories that often compel, engage, and motivate. I’ve been privileged to have contact with the stories of the Lamar wolves, just a little. In this moment, sharing those stories when people ask brings me comfort. People thank me, but I want to tell them it is I who am grateful.

I am also awed at how people’s understanding of the meaning of this wolf’s life—and death—shifts. I see this shift when I tell them who he is, when I name him, when they hear his stories. Inevitably, knowing his stories opens up the possibility that other wolves have individual stories—individual lives—as well. And if wolves are individuals, why not ravens? Why not elk?

Why not each other?

So this is not just a dying wolf. It—he—is 949M. He is alpha male of the Lamar Canyon pack. And he has quite a story.

949M was a large, strong adult wolf. The coyote pup at Willowbrook did not yet have a fully mature immune system, nor the physical reserves of an adult. Unfortunately, her illness ultimately proved too much for her to overcome.

With a few exceptions for education ambassadors, Willowbrook patients are not named. If all goes well, they are with us only briefly. In the rare cases where they cannot be released and become permanent residents, we still want to signal that they are not pets. Their proximity to the public, in conditions of captivity, may encourage some visitors to see wild animals as creatures that can safely and ethically be kept as a domestic member of the family.

This does not, however, mean that they are not all highly individual. Anyone who has watched even oft-maligned pigeons and gulls quickly notices that certain individuals stand out, and this means that all individuals are indeed just that. Chicago is full of its own dramatic narratives—canine, feline, avian, and all the rest—just waiting for us to discover them. Sometimes it takes the end of a life to remind us how unique each one is.