Eulogy for the Passenger Pigeon

Imagine a bird shaped a bit like a mourning dove but much larger, slate blue on the back, salmon pink on the breast, with an opalescent necklace of green and rose. The bird lived in flocks so large they would darken the sky, sometimes for three days, as they passed overhead. Their wing beats were strong enough to cool the air and loud enough to frighten horses. People could kill 1,200 of these birds before breakfast. 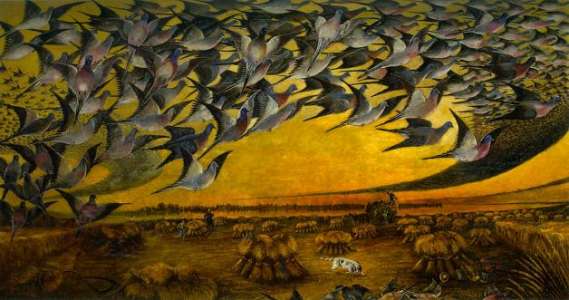 Today, the non-native carrier pigeon loafs in the rafters of subways and poops on park statues in cities around the world and thus has earned the modern epithet of city pigeon or winged rat. The passenger pigeon, whose population included billions of individuals, is gone. Extinct. We ate them all and left just a few skins to be studied in museum collections around the world.

We continue to consume. In a globalized marketplace, it may be more difficult to apprehend the impacts of our consumption, yet everything we have ever touched and nearly everything we’ve ever seen was grown from the earth or dug out of it. When we buy a product, a hole is created in the earth on our behalf. What will we fill that hole back up with? Something that can re-enter the ecological cycle and preserve choice and freedom and health for future generations? Or will we leave a dirty, toxic Earth where one place looks essentially like every other place?

The story of the passenger pigeon continues today, perceptible in the dwindling numbers of once abundant monarch butterflies and little brown bats of American neighborhoods, and felt by animals that live half a world away but are impacted by our purchasing decisions at home. Every time we eat palm oil, buy a new electronic gadget, or try to keep up with the Joneses, our purchases contribute to resource extraction that can result in catastrophic extinctions, such as those predicted for wild gorillas and orangutans during the next generation, and nearly half of North American bird species a few generations later.

Practically though, why should anyone care about extinction? Backyard birds are nice but most people can only recognize a few species anyway. As for great apes, to most people they are simply something to gawk at when visiting a zoo. I see three fundamental reasons to conserve biodiversity: utility, aesthetics, ethics.

Utility. What good was the passenger pigeon? You and I can’t presently enjoy pigeon pot pie and other pigeon-based dishes that most people inhabiting this country ate from time to time, from the earliest people to come to this continent until the late 1800s. If your family line goes back more than three or four generations in the United States, your ancestors probably ate passenger pigeon. You cannot. We can’t use the bird’s down and feathers. For those who enjoy hunting, they can’t engage in the challenge of pursuing this bird that could fly sixty miles per hour. We have lost the ecological functions of the birds: as food for other animals, from the peregrine falcon to the endearing American burying beetle; as seed dispersers for favorite hardwoods like beech; and as competitors with animals like mice. The absence of passenger pigeons ripples throughout the food web, with unintended consequences. For example, mice now thrive in unprecedented numbers, which provides homes for more ticks, which then puts you at greater risk for acquiring Lyme disease as you hike or even just work in your garden.

Aesthetics. Beauty is subjective but most would agree that the individual bird is pleasing to look at, their flocks awe inspiring, and their effects on generations of forests gratifying.

Ethics. Who are we, as a bipedal, binocular, megacephalic, sparsely furred primate, to say, “You’re useless, you’re ugly, you deserve to die!”? 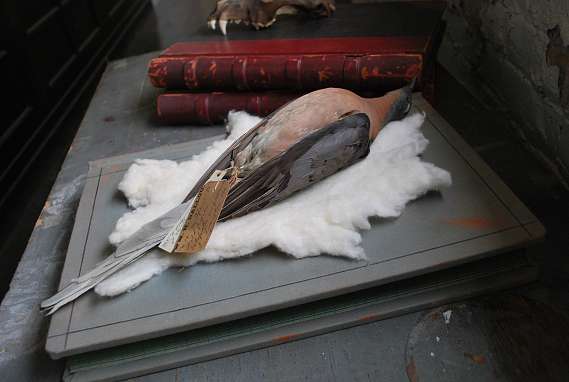 Perhaps none of us really feel any different as a result of the loss of the passenger pigeon, yet our life experience is different than it could have been. Maybe the passenger pigeon is not really an “important” species for ensuring the survival of humans. But which one is? How do we know? When will we know? Certainly the great web of life that we, as a species, rely on has key players. Will our human activities unravel the web too much?

I hope this year, 2014, the tragic centenary of the death of the last passenger pigeon, will stimulate people to live more sustainably. The following is my own short list for those seeking a sustainable way forward: Reduce your consumption to the minimum. Recycle to the maximum. Don’t worry about how much your neighbors have; set an example of how much one can live without. Skip processed food, turn off lights, carpool. Ask yourself if you need a new cell phone every time the contract is up—or a new car or boat or TV or pool, or…, or…, or… Just because your neighbors bought one or your kids beg for one doesn’t mean you need one. Try to live within the ecological and material constraints of your ancestors.

I try to live this way in my personal life and recognize the challenges. Precocious children require significant material investment. Friends may not understand your decisions and may view these decisions as an implicit criticism of their own choices. Yet, as I have brought the story of the passenger pigeon to people around the country, my commitment to live a more sustainable lifestyle has increased. The beauty, usefulness, and spectacle of the passenger pigeons is not the only thing we have lost, our community expectations of natural abundance, variation, and diverse experience have also dwindled. At the time that the passenger pigeon was becoming rare, people were expressing astonishment at the rate of biotic loss. Imagine how impoverished they would view our modern world of material abundance. How much more “stuff” do we need than these previous generations?

I hope we can all use this centenary year as a new beginning by finding ways that work for each of us to reduce our impact on the earth and help others to do the same. Though the passenger pigeon is no longer with us, the loss of this species can still have redemptive value in our lives.

Visit PassengerPigeon.org for ideas, activities, and more information on this remarkable species.

Images: origami passenger pigeons in the header image are part of Todd McGrain’s lostbirdproject (you can view Todd’s sculptures and make some origami of your own at the Peggy Notebaert Nature Museum); top image is “Passenger Pigeons in Flight” (1937) by Lewis Cross; bottom photograph of passenger pigeon specimen by Steve Sullivan.