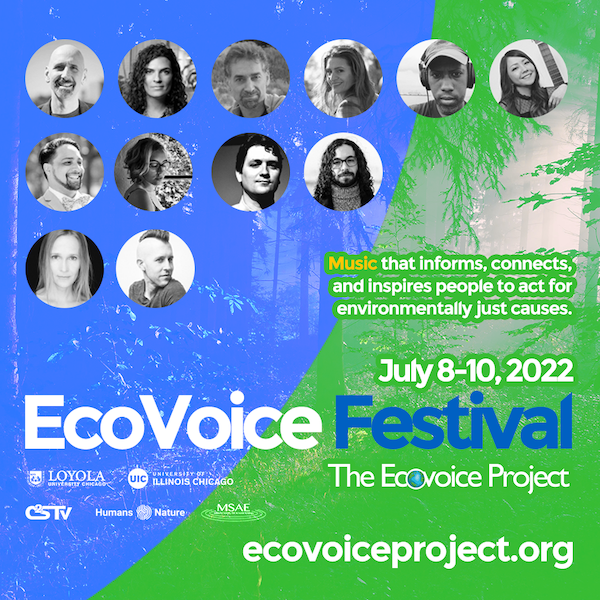 We are honored to be partnering with The EcoVoice Project for their first annual, Chicago EcoVoice Festival! This festival includes three days of performances and activities that build awareness, educate, and call others to action on climate change. The 2022 inaugural festival will take place July 8-10 and be hosted at Loyola University and the University of Illinois, Chicago.

As a partner to the EcoVoice Festival, we are delighted that pieces published by the Center for Humans and Nature will be featured at the festival. Work by Center Contributors Brock Dolman, Anushikha Bhas, and Sean Prentiss will be read as part of the opening concert on July 8th. The concert, Ocean: A Song Session Concert, is a multidisciplinary exploration of our human relationship with the oceans, through new musical works and improvisation, film screenings, and literary and poetry readings.

Festival co-founder and countertenor Thomas Aláan and pianist Jonathan Hannau will open the concert with solo pieces about the seashore, then join together for Ocean: An Improvised Song Cycle. Between performances, a film screening of Madison Smith’s Ocean’s Call will confront our impact on the ocean through visual and musical mediums. Dr. Craig Santos Perez will read his epic poem, Praise Song to Oceania, via a beautiful video by Justyn Ah Chong. Thomas will return with guitarist Nanae Fujiwara to premiere Adam Schumaer’s multi-movement musical setting of Praise Song to Oceania. The concert will follow introductory remarks by Dr. Mika Tosca (School of the Art Institute of Chicago and the Jet propulsion Laboratory).