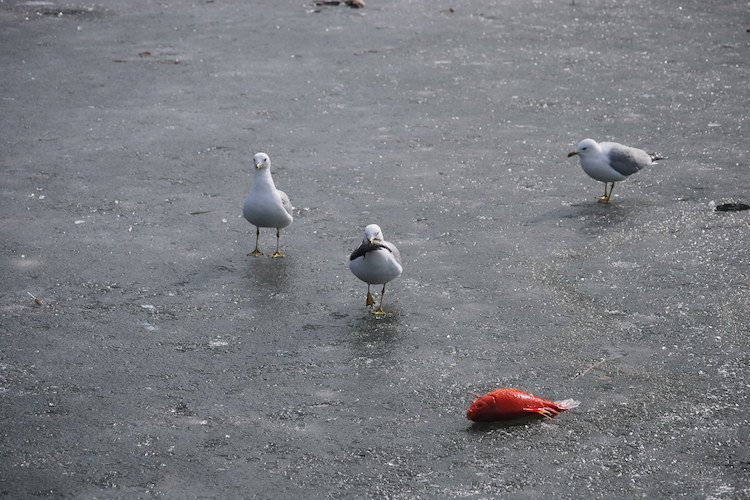 A friend recently invited me to participate in the #challengeonnaturephotography, a social media activity where particularly beautiful photos of nature are posted, usually accompanied by the backstory of the photo. Scanning through my files, one image (displayed above the title of this post) caught my eye. It’s not the best photo from an artistic standpoint, but it encapsulates an aspect of how human activity and aesthetic preference impact habitats and the lives of so many animals, including you and me.

The setting: an urban pond

This is an urban park pond. One of the easiest things a municipality can do to “keep the place looking nice” and keep the taxpayers happy is mow. Mowing a park also results in happy Canada geese—the short grass allows them to see predators coming from a long way off, and, if the park includes water, they’re even happier because they can easily escape a threat by slipping into the water (something much easier for a heavy-bodied goose than flying).

Once in the mowed-safe park, geese discover food—constant mowing keeps the grass succulent and soil compaction from the mowers favors nutritious clovers and other forbs. Moreover, visitors to the park may drop trash or intentionally feed the geese (“They seem so hungry,” I’m told). Of course any food we leave behind is higher in calories than grass and forbs so these tidbits will be favored by the geese but will also have consequences for their health. Though it’s unlikely that a wild goose will develop a foie gras liver, they might end up with twisted growth plates in their wings 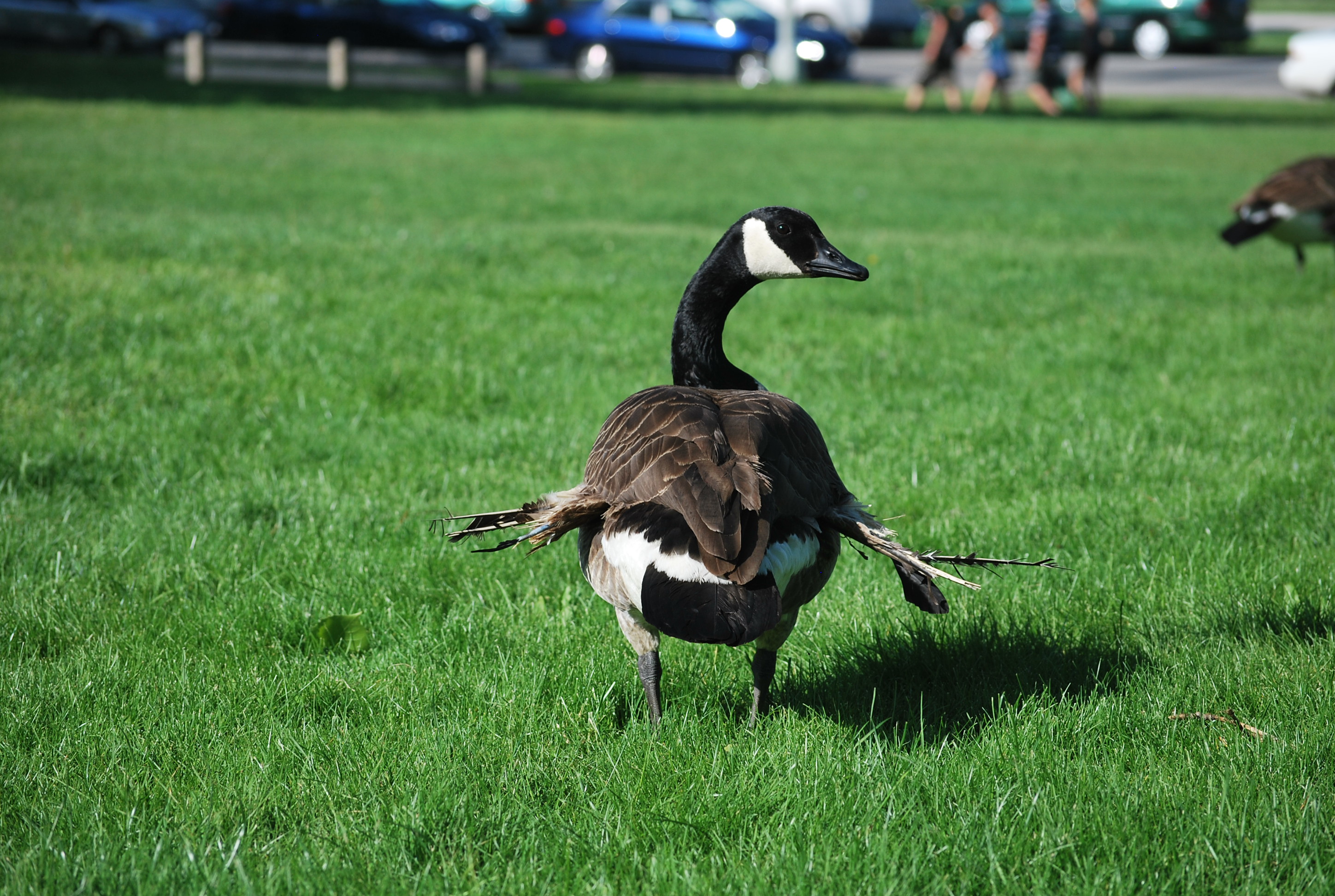 Poor health doesn’t limit a park goose much, though. They live in a safe buffet with all their friends, and consequentially can make babies and poop as much as a healthy goose.

A population of geese that does not migrate in the natural way—daily from a place of safety to a place with food, annually in search of unfrozen water and food—results in a lot of goose poop sitting in one place. And when it rains, all the poop ends up in the water. The result is eutrophication—excessive nutrients. 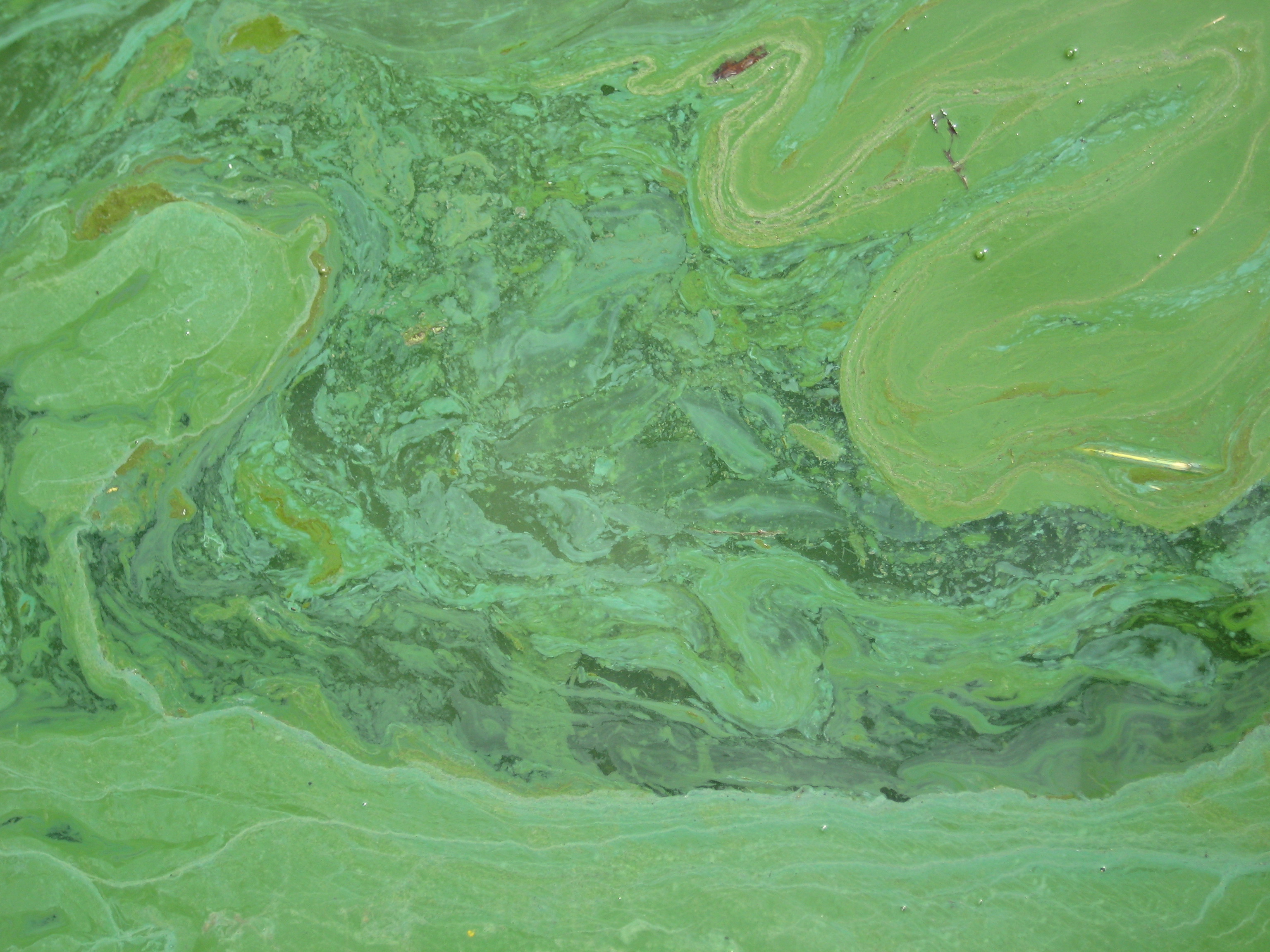 When a body of water is eutrophic, lots of algae grow. Bigger aquatic plants could grow too, but algae usually grows faster, taking up the nutrients and blocking sunlight before the bigger kinds of plants can profit. Many animal species can eat algae and flourish in eutrophic pools, however, and nutrients are usually beneficial. So eutrophication is good, right? We’ll get back to that.

The foreground: a goldfish

First, let’s look at the goldfish in the photograph’s foreground. Yes, that’s a goldfish (Carassius auratus), not a “koi” (aka brightly-colored domesticated carp, Cyprinus carpio). It got that big because it can eat algae, and bigger plants, and snails, and young freshwater clams (the most endangered group of animals in the world), and stuff people throw in the water, and goose poop. While eating, goldfish rip up the pond bottom, making it hard for plants to take root and reproduce, making the water murky so plants can’t photosynthesize, and adding soil nutrients to the water in addition to the fecal nutrients, all of which favors algae.

And why are there algae-promoting, nature-destroying fish in an urban pond? Some yahoo put them there. Maybe this person won the fish in a game somewhere (yes, this still happens). Maybe this person bought a friend to have in the apartment, then released it when it got too big (not likely—most people accidentally kill their fish before they grow much), too stinky (this is what happens when you feed a fish like you feed yourself), or when they had to move (Why bother figuring out how to transport your fishy friend? Just buy a new one to match the new curtains.). Whatever the reason, folks “set their friends free” in this urban pond. Most died, the prey of herons, poor water quality, bigger fish, and myriad other reasons. But some survived, and grew, and had babies, and made huge, strikingly colored schools that swam slowly and beautifully in the murky eutrophic water. 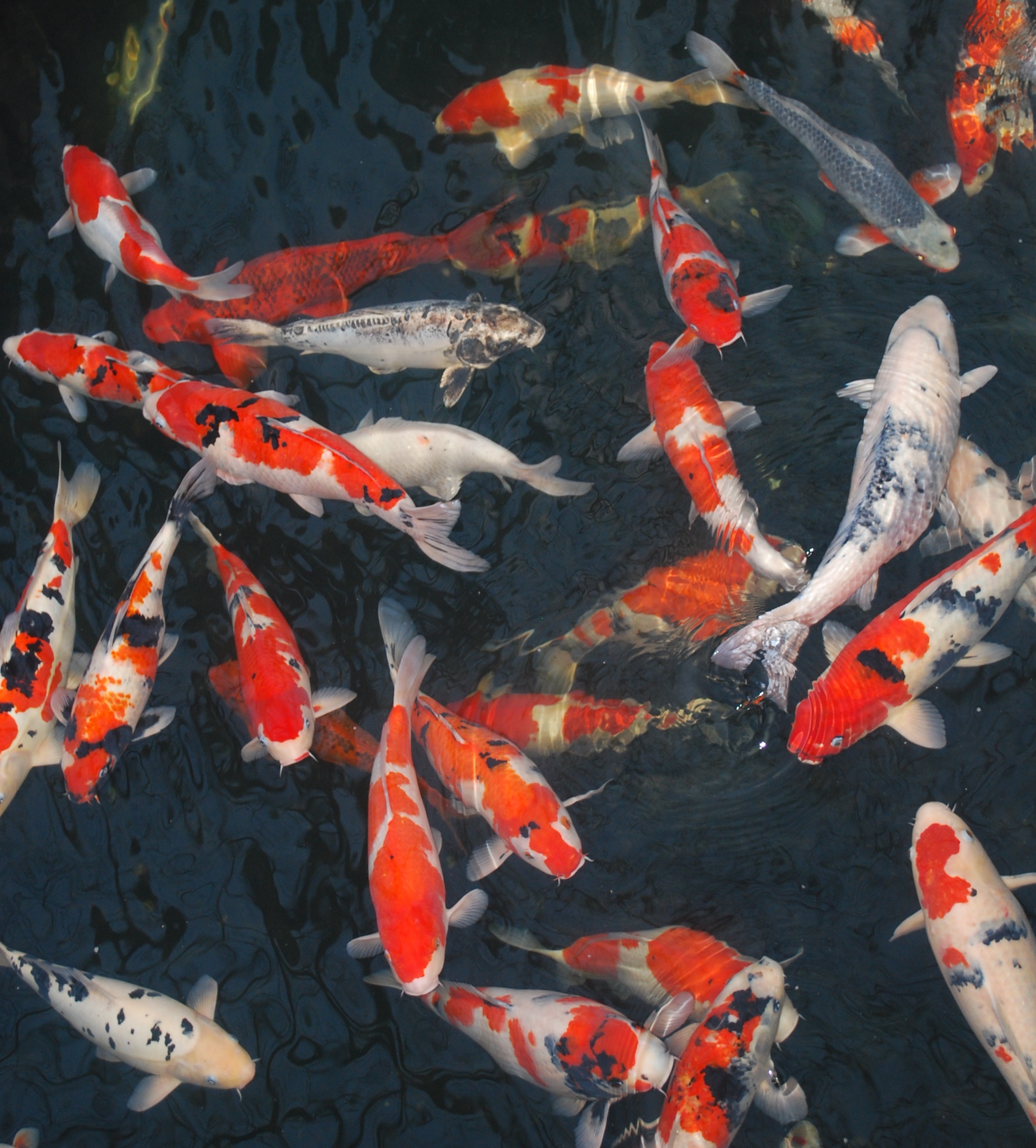 Now all this may seem kind of good—for now. Native fish, birds, and mammals can eat the goldfish explosion. Snails and some invertebrates can also thrive in these conditions. Sure, we lose some plants and the water might not look very appealing, but nobody swims in ponds anymore and who ever looks at aquatic plants… right? Well, maybe the average person isn’t really impacted by all this, at least during the summer. But wait… there’s more…

The time of year: Winter

In the winter, the sun sits low in the sky, shines less intensely and for less time per day. All those algae that were so happy to eat the concentrated lawn-sourced goose poop nutrients can’t do so when their photosynthetic cells don’t get power from the sun. So they die.

This is good news for bacteria though. Many species of bacteria eat the algae carcasses and can do so in the dark and even under the frozen crust of ice that forms on ponds in the winter.

There’s a key difference between the function of algae and bacteria in a winter pond ecosystem, though—while algae take in CO2 and make oxygen, bacteria consume oxygen and give off CO2 as well as methane (depending on the species and conditions). So, when the pond freezes over, anaerobic conditions (a lack of oxygen) begin to dominate. A body of water doesn’t even have to freeze over for dissolved oxygen levels to quickly decline, but with a lid of ice, the fate of pond life is “sealed.” 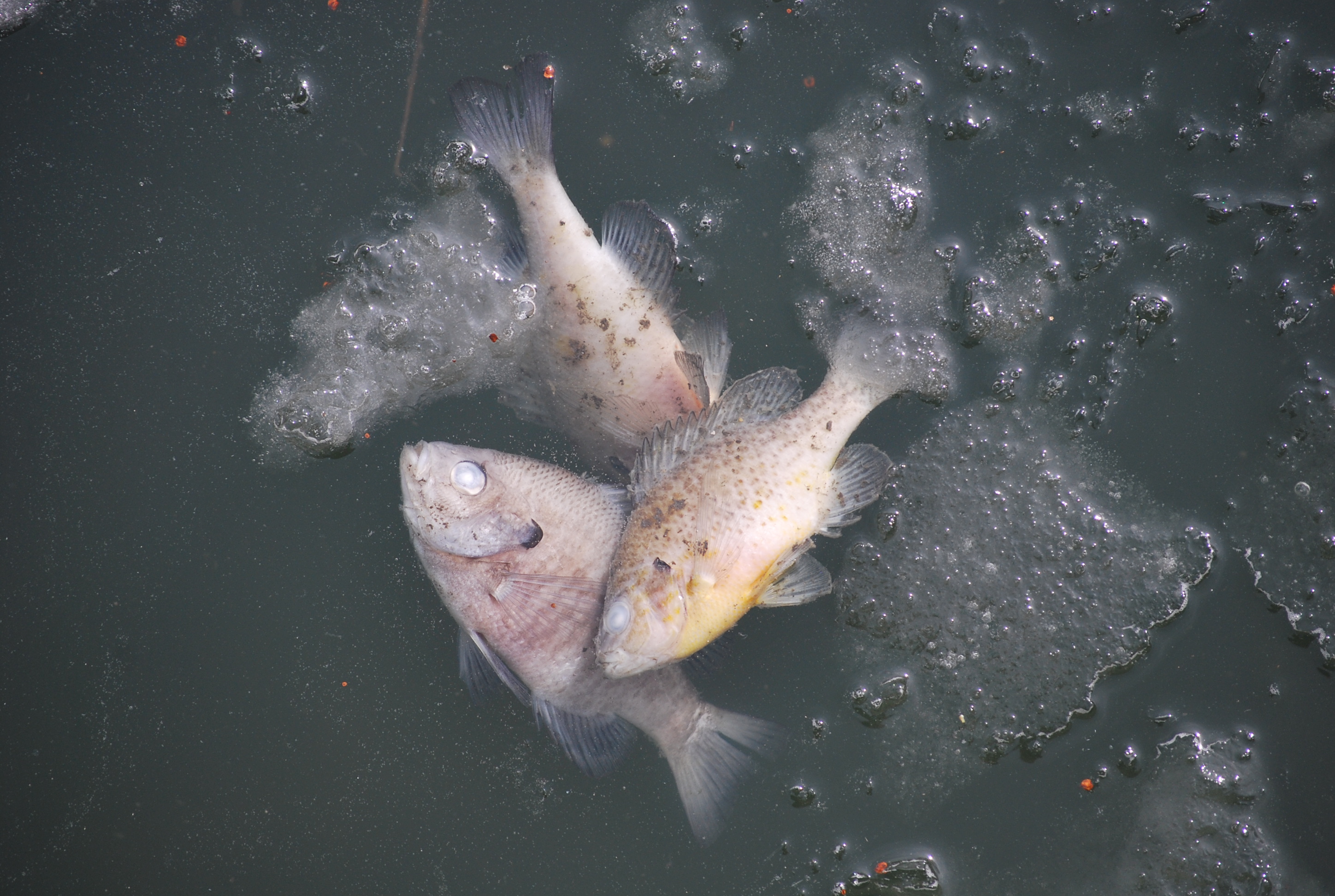 As oxygen levels decline, methane production increases because more things die. Sometimes very quickly, whole populations of fish and aquatic invertebrates begin to float up to the surface. Even hibernating turtles and frogs will suffocate. Goldfish can breathe atmospheric air and so survive better if they can find a breach in the ice. Many other fish species may try to gulp air in desperation but can’t use it well. On the day I took the picture, the pond was littered with big crappie; the gull in the photograph is eating a green sunfish.

In the photo, we see ring-billed gulls that have paused in their fight over the fish. There were several other gull species on the pond that day too, and some spectacular acrobatics as the prize fish were fought over and often dropped by one wheeling, harassed gull, only to be caught midair by another, who would soon lose it to a different dive bomber. All this fish death makes gulls happy. The added protein in their diets helps them survive better, breed better, and results in more babies. Isn’t more gulls and more gull diversity a good thing? More on that below…

The future: how the things in this picture can impact you

Once the ice thaws and the animal remains finish decaying, the pond will be more green and slimy than ever before. Stinky too, since the sediment that has formed will encourage more anaerobic bacterial growth than is possible in a plant-covered, undisturbed bottom. The pond will become less vibrant. The sound of frogs on the water’s edge will probably be gone, as will the songs of many insect-eating birds. Turtles will be fewer, though their shelled carcasses will linger near the bank longer than the fish do (and elicit tears and complaints from folks who demand a mowed, fertilized, green park lawn). 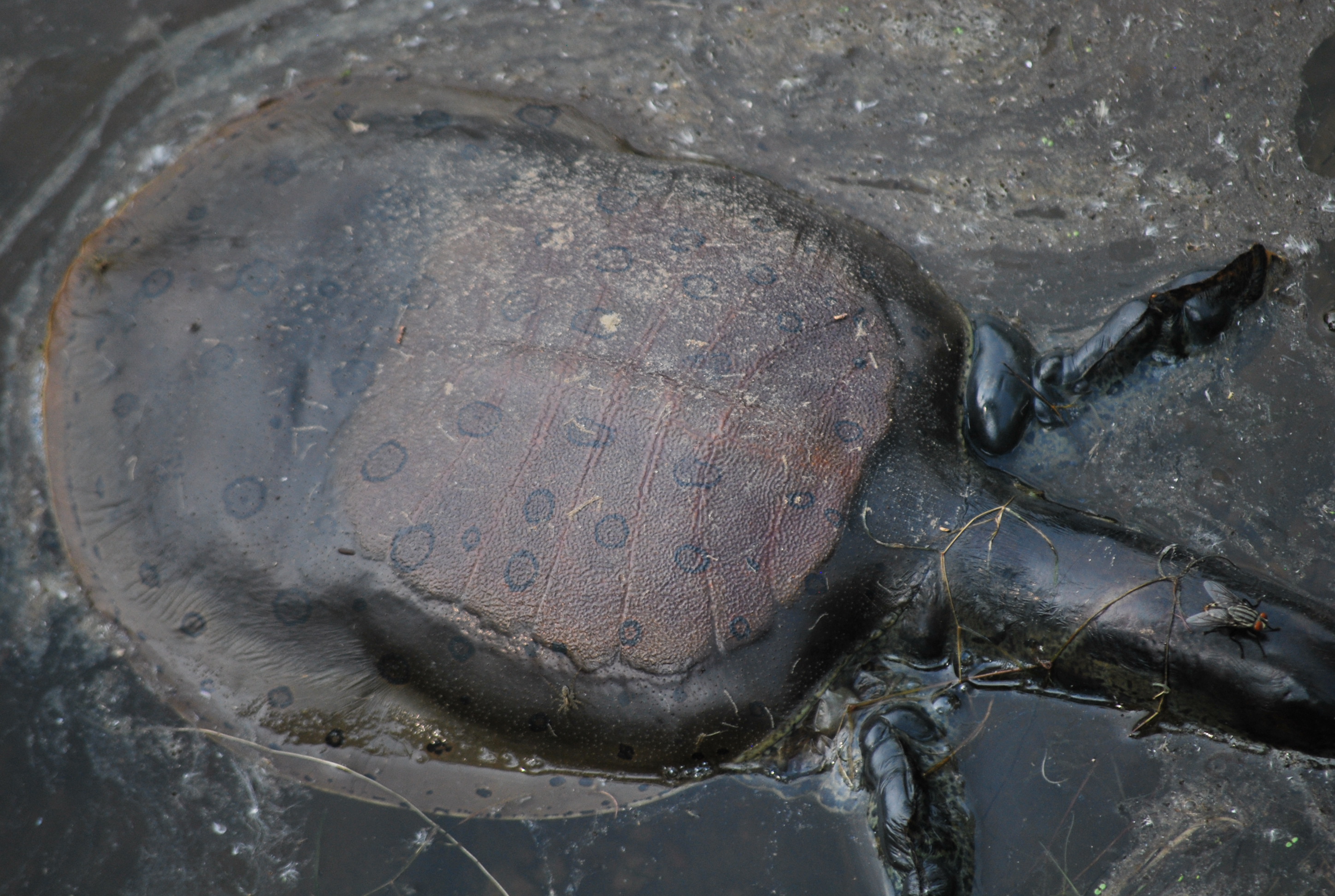 The geese are still around, though, happy and poopy as ever. The gulls too are present in even greater numbers. More gulls means more gull feces in Lake Michigan, which is blamed for more E. coli in the water that results in more closed beach days during the summer.

While fish death from pond freezing and O2 decline is a sporadic phenomenon of nature, it is exacerbated by our choices. In this case, the mowed lawn, the geese, and the goldfish turned something that happens occasionally into a perpetual and evolving catastrophe. Adding aerators and algaecides can mitigate the problem by decreasing algae and anaerobic bacteria and providing air for aquatic animals. This is a common action in places where park visitors and managers want to have their cake (the look of an overgrazed English estate lawn) and eat it too (but keep the pond from exuding unctuous, earthy smells in summer and sulfurous ones in spring), as it were. But it is not a sustainable solution.

No single solution for an urban park is sufficient, but one thing that can break the chain is to limit mowing to the fall. The resulting tall grass will be a barrier to unnaturally resident geese but a boon to biodiversity, creating a healthier environment for everyone. By mowing in the fall, the pond and park becomes a welcome home for naturally migrating geese. Though it might take time for park managers and their constituents to recognize that tall grass can be attractive, kids will instantly identify the adventureland that awaits them. And, if my proposal to allow parks to have a more natural, savanna-like look is unpalatable, at the very least a wide buffer of tall plants can be kept on both the land and water sides of the pond’s edge. Meandering paths can be cut through the plants so people can get close to the water but that make it difficult for geese to get there without flying. These plants will absorb nutrients of all kinds, including goose poop, and may decrease the numbers of permanent geese residents in the park, too. 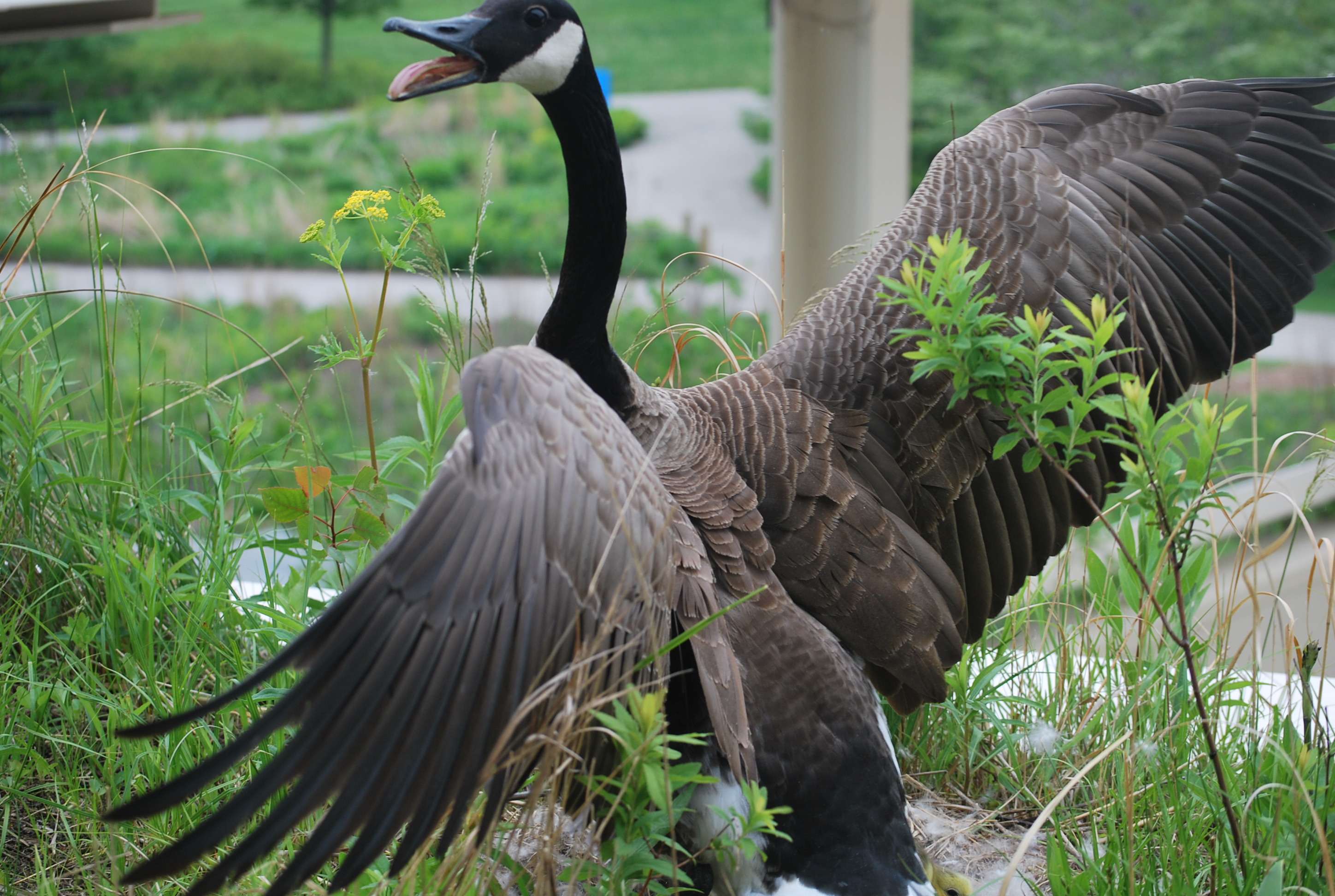 So, in addition to refraining from releasing pets into the wild, by learning to love tall plants, we can break the chain that results in green goo. Fewer resident geese and less eutrophication means less algae, which means less stink, less death, fewer gulls and fewer beach closures, but more fish, mussels, interesting and innocuous insects, and a better functioning, healthier ecosystem—a pond in which we, and many others, can swim.