Here’s Looking At You: Ruminations on Rabbits and Squirrels 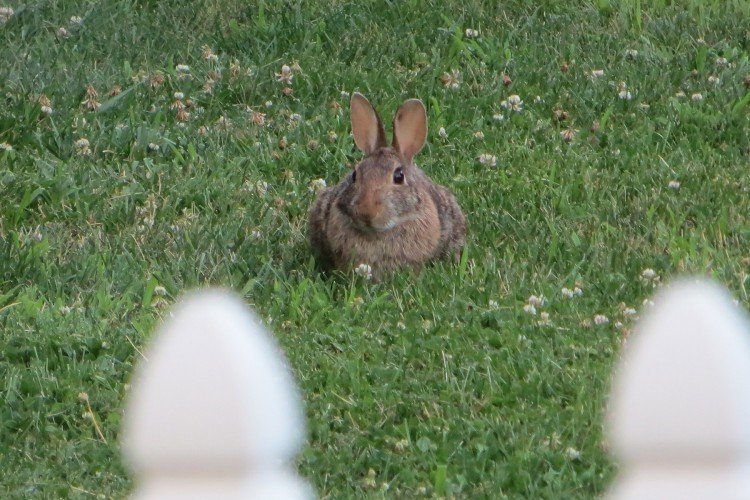 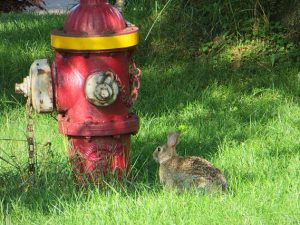 Each year, I eagerly anticipate spotting the first rabbit of spring. It’s a sign of all that’s to come—warmer weather, longer days, outdoor swims, and seeing approximately 23,237 more rabbits. In years past, this aforementioned first rabbit was often spotted while I was in the company of my mother on one of our walks. We were gleeful; whoever spotted it first would point and say: “Look, look, look”—our code for “There is a rabbit.” My elderly mother is no longer able to accompany me on these walks. Because of this, the past few years of first-rabbit-sightings (and subsequent sightings) have been bittersweet for me. This year appeared more auspicious. A beloved friend had gifted me his binoculars, and so I went out in the world one particularly cold April afternoon, determined to locate that first spring bunny. It was a little miracle when I found it; I had never before seen a rabbit’s resplendent markings with that degree of clarity. I stood there looking through the binoculars for a ridiculously long time, until finally I became aware of how cold I was, and walked home smiling. The rabbit, however, never appeared to have moved a muscle.

Exhilarated by this close focus experience, I started to bring a camera as well as binoculars on my daily walks. Soon a plan emerged to document every rabbit I saw. Eventually I began to include squirrels, a few birds, and even an occasional dog in the mix. 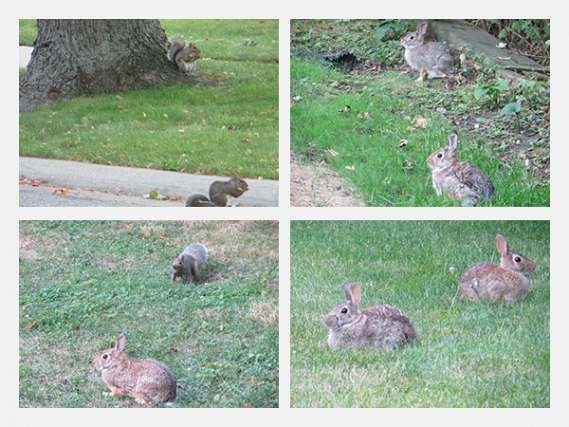 What follows are random rabbit and squirrel recollections from this past spring, summer, and early fall.

By early May, it became apparent to me that it was going to be a banner year for bunnies. As I had tasked myself with taking a photo of every rabbit I saw, my hour-long walks became considerably longer. I was practically tripping over rabbits. I initially was concerned that having lost the thrill of the (metaphoric) chase, I would also lose interest in the project. But happily every rabbit sighting was just a little different from the one before. I swear I saw at least one descendent of Dürer’s rabbit; it looked exactly like him. 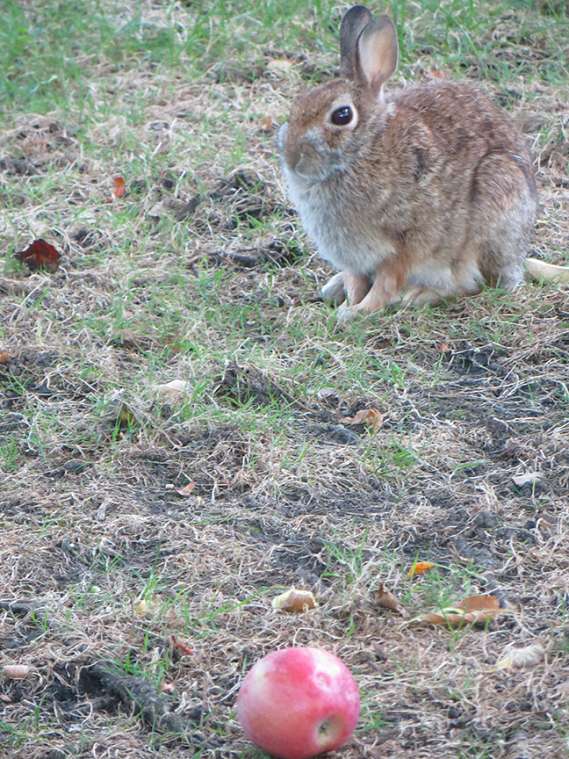 One day in early June I approached a bush with my camera ready—I could tell something was just underneath. Out hopped a beautiful black rabbit, clearly an escaped house pet. I wondered how long it might survive. I tried to catch it, not certain what I would do if I did, but it ran faster than I. When a small boy and his grandfather approached, I thought perhaps I had found the owners. I asked them if the rabbit belonged to them, but neither spoke a word of English. Instead the little boy went running across the street, pointing and indicating to me that he saw another rabbit. This clearly was his version of “Look, look, look.” 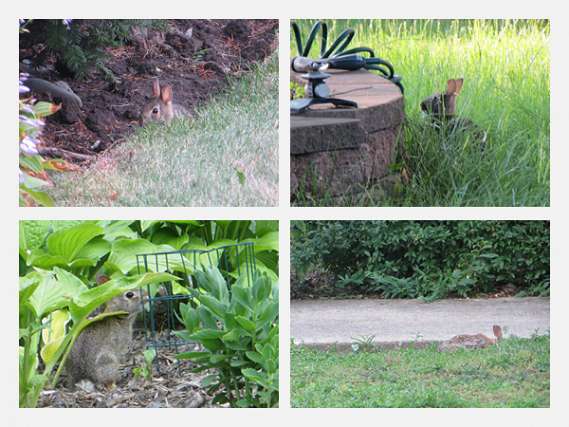 Sometime in early August I saw a rabbit with a broken leg, which stuck out at a right angle from its body. I know nature isn’t Disney World, but I still felt a bit teary. 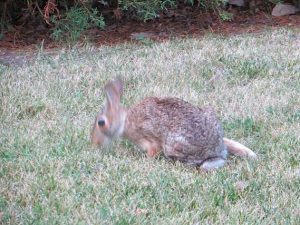 The rabbit hopped remarkably well under the circumstances—certainly better than I do with two good legs. I was overjoyed when I saw it again a few days later. I was more elated still when I saw it several weeks later. I have subsequently referred to it as Hero Bunny. I realize this is somewhat absurd, but nevertheless…

Then there were the other fur-bearers in the neighborhood. Squirrels are death-defying daredevils. As I began to pay closer attention to their activities, I witnessed acrobatics that rival any Cirque de Soleil performance. I watched several squirrels cross the street by leaping from tree to tree. Based on other sadder observations, I believe this may be a safer prospect than crossing via the perilous pavement. I suspect they travel tree-to-tree often; I confess I had just never taken the time to stop and watch. 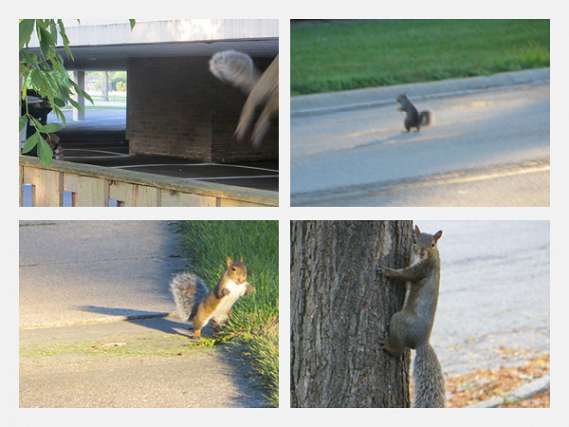 Although my eyes have become sharper over time, I have always been proud of my ability to spot rabbits. It’s the ears that I notice first. Because of this skill, I now have thousands of rabbit photos—hopping, eating, resting—good pictures, terrible pictures, amusing pictures. Some rabbits take off the second I approach. Others continue doing whatever they are doing as if I am not there. Squirrels typically make me work a bit harder. Often a squirrel bolts the minute it sees me looking in its direction. 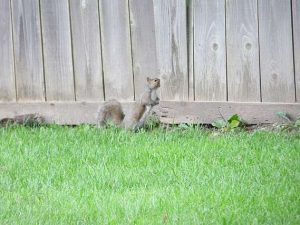 And so I developed a peculiar technique of pretending to be doing something else with my camera. I would look away, anywhere but at the squirrel. At the last second, I would turn and take the picture. It has passed through my mind on more than one occasion, that the squirrels were messing with me, insisting I go through this elaborate process just to see how serious my intentions were. Of course, this cannot be … or can it?

I am a visual artist (but not a photographer) and was surprised how important taking these pictures became to me as time passed. I was more surprised, even moved, by how much these animals taught me about the importance of waiting and of staying still. My original point-and-shoot technique shifted into a more considered and much slower approach. The longer I waited, the bigger the payoff in the images. 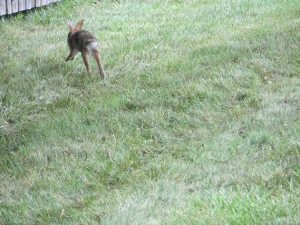 Nevertheless, I almost always missed the very best pictures, which seemed only fitting. I was in rabbit/squirrel territory, and they were not there to pose. I was oddly happy when a rabbit took off, and I missed the best shot. And I was grateful each time I took one that was pretty good; it was like a little gift.

Right around September 1st, all the neighborhood squirrels seemed to collectively binge on amphetamines. Clearly something was afoot. Every squirrel in the neighborhood was running around like crazy often with something in its mouth. Where I might typically see one squirrel, now I’d see two, three, or four in one tree or yard. Their expanding girth led me to suspect they must have been eating as much as they were saving. 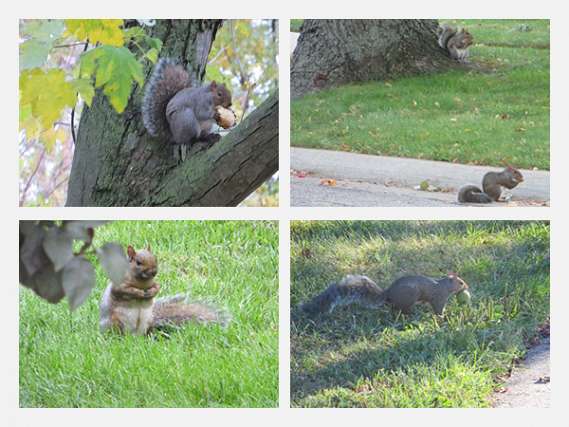 I write this on a rainy cold day in early November, and I’ve just come in from a walk. There wasn’t a rabbit to be seen; perhaps I’ve spotted two or three in the same number of weeks. In June, I would have seen that many in fifteen minutes. I did see a number of squirrels today, mostly darting here and there and carrying enormous things in their mouths. One squirrel looked twice as big as any I’d seen all summer. In my own way, I too, am seguing toward winter; as it approaches, my walks go inside instead of out. Although I am not a big fan of this season, I always get a feeling of anticipation on the first day of winter, the shortest day of the year. I note happily that every day after that will be just a bit longer, and I will begin to count down the days until the first rabbit sighting of spring. I will be so ready for this appearance and might just say, “Look, look, look,” to anyone passing by. 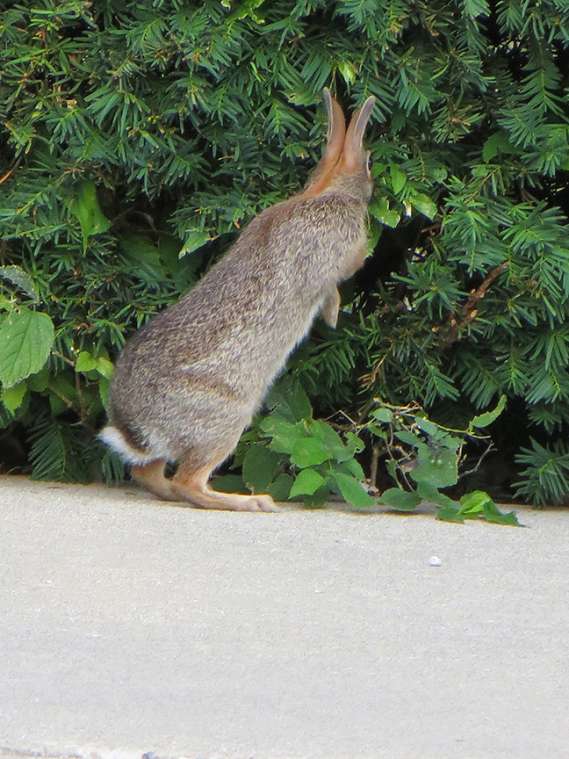 *All photographs by Judith Brotman.