Human rights are the moral fibers woven throughout humanity and remind us that we each deserve to live lives of dignity. The right to be free from hunger, the right to housing, the right to safe drinking water, and the right to an adequate standard of living constitute the foundation upon which freedom, justice, and peace can flourish.

The Universal Declaration of Human Rights, adopted by the UN General Assembly in 1948, is the seminal document that articulates these inalienable rights to which all human beings are entitled. Since 1948, numerous international documents affirm the importance of human rights, including the International Covenant of Economic, Social and Cultural Rights and the Universal Declaration of the Rights of Indigenous Peoples. Governments do not bestow these rights upon us, but governments are required to promote, protect, and fulfill the human rights principles articulated in these documents. When human rights are violated, a tear occurs in our human tapestry and we must act to ensure that the violation stops and that rights are once again protected.

Protecting human rights also means that we have responsibilities to our planet’s web of life. A stable climate system is essential in order to ensure that human rights are actualized. In Alaska, the only Arctic state in the United States, climate change is occurring at least twice as fast as in the lower latitudes. The US National Oceanic and Atmospheric Administration proclaimed 2016 as the hottest year in its 137-year record, the third consecutive year of record warm years.[1]

In Alaska, temperatures were 3–7 degrees Fahrenheit above normal, shattering previous records. It is important to remember that only one degree is the difference between ice and water. Lying just 143 miles (229km) south of the Arctic Circle, the annual average temperature in Nome, Alaska, was above freezing for the first time last year.

For the indigenous peoples who live in villages on the Bering and Chukchi seas in Alaska, such a difference is life threatening. Just south of the Arctic Ocean, these northern seas separate Alaska from Russia and freeze during winter. Blanketing millions of miles, sea ice forms when the water temperature dips below freezing. Fastening to the coast, the ice creates a seawall protecting villages from the storms that arrive in the fall with hurricane-strength winds. September and October were traditionally the months when the Bering and Chukchi seas began to freeze for the winter. But now these seas may not freeze until December or later. We are bearing witness to the fast-forward of geologic time with the rapid disappearance of Arctic sea ice. Arctic sea ice is now 40 percent of its 1979 size, when satellites began capturing this data.

Our collective failure to reduce greenhouse gas emissions and stop fracking and oil and gas drilling violates the human rights of those who have least contributed to our climate crisis. As the ice disappears, erosion accelerates and threatens the ability of Alaska Native communities to remain in the places they call home. Indigenous communities in the Arctic are now some of the first communities to face the permanent loss of the ancestral lands on which they have survived and thrived for millennia. 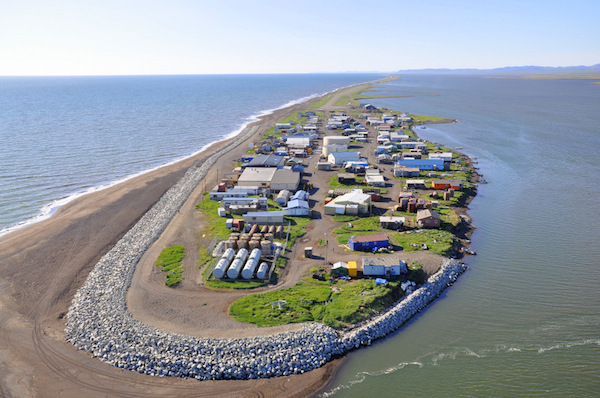 For several Alaska Native communities, relocation of their entire community is the only long-term adaptation strategy to protect the lives of community residents from climate change impacts. Climate-induced community relocations are perhaps the greatest human rights challenge of our time. Population relocation affects the rights to life and self-determination, as well as a wide range of social, economic, and cultural rights.

Shishmaref, Kivalina, and Newtok are three of the most imperiled Alaskan communities. Each community decided decades ago that relocation was the only long-term solution to protect community residents and ensure their cultural survival. Federal and state government agencies agree, yet relocation has not yet occurred. Our inability to adapt to this radically changing climate is demonstrated in the quagmire of statutory barriers to relocating these communities as well as the lack of a government agency that would provide the mandate and funding for the relocations.

Community leaders have taken extraordinary steps to protect their culture and heritage, traveling repeatedly to Washington DC to lobby Congress and meet with the White House. In presentations to government agencies and Congress, Shishmaref residents plead:

The no-action option for Shishmaref is the annihilation of our community…We are unique, and need to be valued as a national treasure by the people of the United States. We deserve the attention and help of the American people and the federal government. …Shishmaref, we are worth saving.

Despite this advocacy, none of these Alaskan communities knows when or if they will be able to relocate to higher ground and protect their unique way of life. Alaska Native peoples are not the only populations faced with the unprecedented permanent disappearance of their homes. Coastal communities all over the world are watching the ocean swallow land, eat shorelines, and submerge entire islands. In the South Pacific, countries such as the Marshall Islands and Tuvalu may permanently disappear beneath rising tides. Protecting human rights means that we are each responsible to the people living in these climate-threatened places and that we must act to protect their human right to life and self-determination and their right to continue to live on ancestral homelands. Their loss is humanity’s loss.

To act on this responsibility and prevent such loss, we must radically cut our carbon emissions immediately. In our arrogance, we think that technology will be able to suck carbon out of the atmosphere and design sea walls tall enough to create fortresses along the coast. For the sixty-two people who own as much wealth as 3.5 billion people, this may be true; they may be able to protect themselves from the ecological unraveling of our planet. But what kind of a planet will they live on?[2] Some have called this era the sixth mass extinction. Plants and animals are not able to make the rapid adjustment to our radical transformation of the web of life. In Alaska, thousands of sea birds, Murres, died in 2016—the largest die-off ever recorded.[3] And Murres are not the only species suffering. In September 2017, another mass die-off of sea birds—this time Northern Fulmars and Short-tailed Shearwaters—has been documented. We are bearing witness to the ecological collapse of the Arctic.[4]

The 2015 UN Framework Convention on Climate Change Paris Agreement includes aspirational language to limit the global temperature increase to 1.5 degrees Celsius (2.7 Fahrenheit). But in Alaska, winter temperatures have already far surpassed this goal. We cannot wait for world leaders to drastically reduce carbon emissions. We must demand that the Earth’s ecosystems be protected now and that those least responsible for our climate crisis be provided the resources to adapt and protect their lives. Divest, protest, and stop using motorized transportation so that we end our addiction to oil. The power for change rests with each of us and, in this way, we can demonstrate our solidarity with all living beings who dwell upon this precious Earth-home.