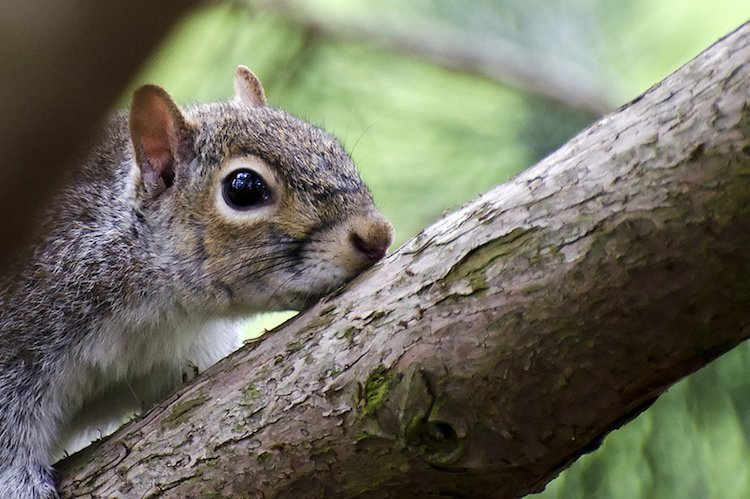 On Friday, I took the train home. Back to my parents’ home, to be precise; I no longer live there. It was a classic August afternoon in the Midwest. The type of weather that makes it feel almost as if the atmosphere itself were a membrane over your body. The clear sun sliced through the otherwise muggy air.

The warmth reminded me of days when we were kids—my brother and I—and the seasons had specific feelings. These late August days were luxurious and lazy. We would craft kingdoms in our yard, undertake voyages in the alleyways and parks, but always return home in time to greet Dad. The memory is strong—one of the few that I can conjure so vividly from that time: See him rounding the corner on the street where we lived—briefcase in hand. See him walking toward the house and my brother and I racing toward him. I remember it all as if I were a robin perched above the scene. The energy, the joy. Homecoming every day. 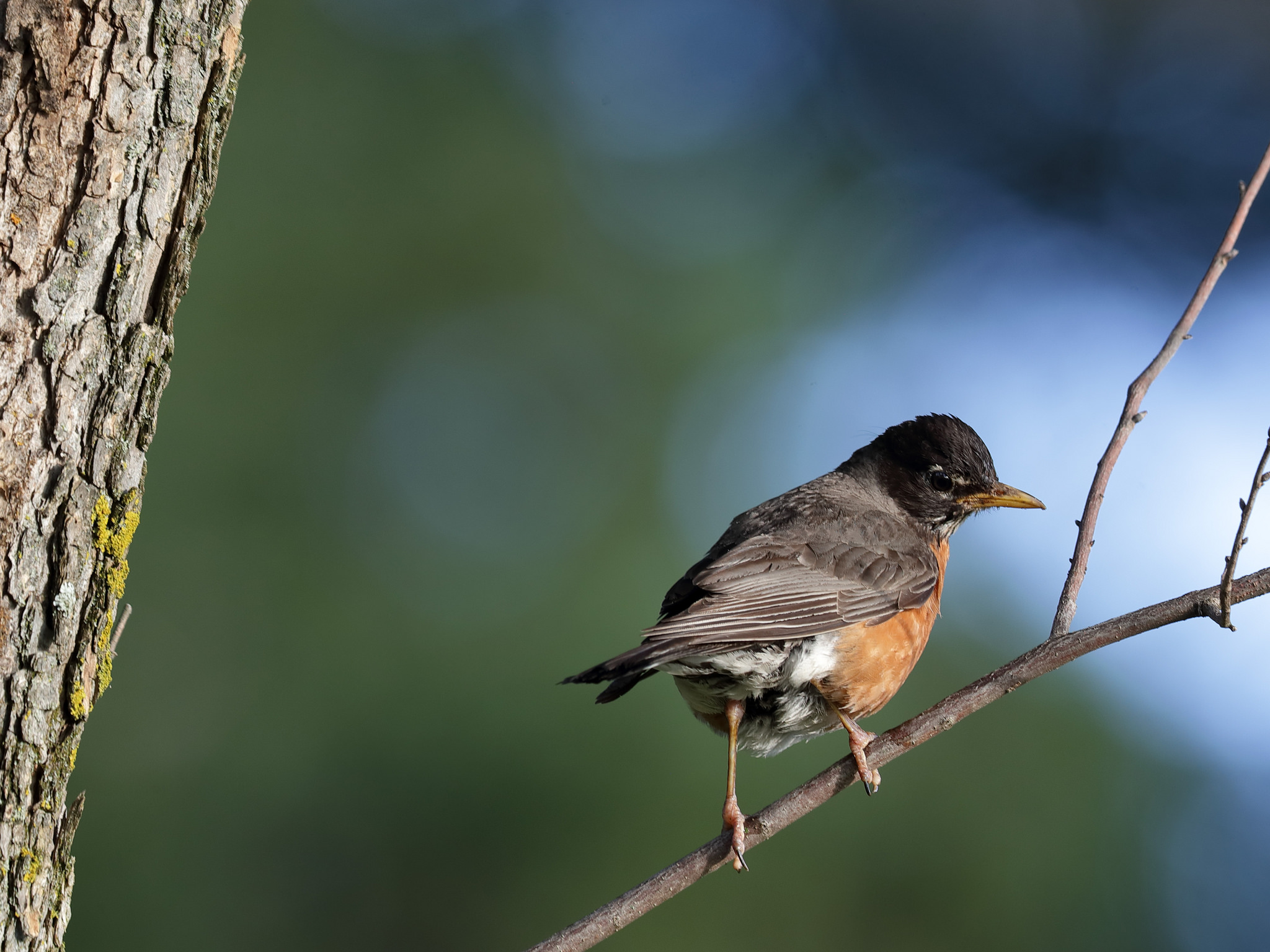 Walking along Harrison Avenue on this August day, I muse over these same miles that Dad walked each day when he worked in the city. I wonder if he ever could have imagined me tracing the same route, laptop in my backpack—memos and meetings left behind—to greet him at home. I certainly expected something else. Back when we scrambled down the block to welcome Dad home, on any given day, I believed my future was in cat-training or igloo-building or as the captain of the world’s fastest land-bound, suburban trekking ship. I had different dreams then.

The urgent plea scatters my memories. A young girl jumps out from her perch behind some bushes and dashes up to meet me. She must be seven or eight. I am overwhelmed by her authority, and I stop walking.

She points to the parkway and I see it: slithering and squirming, blind, in the grass. I am back to being a grown girl in an instant, ready to offer experience and advice.

“It looks like he’s fallen out of his nest,” I observe. “Do you know where it is?”

She points to a tree above us where an agitated squirrel darts up and down along a branch. 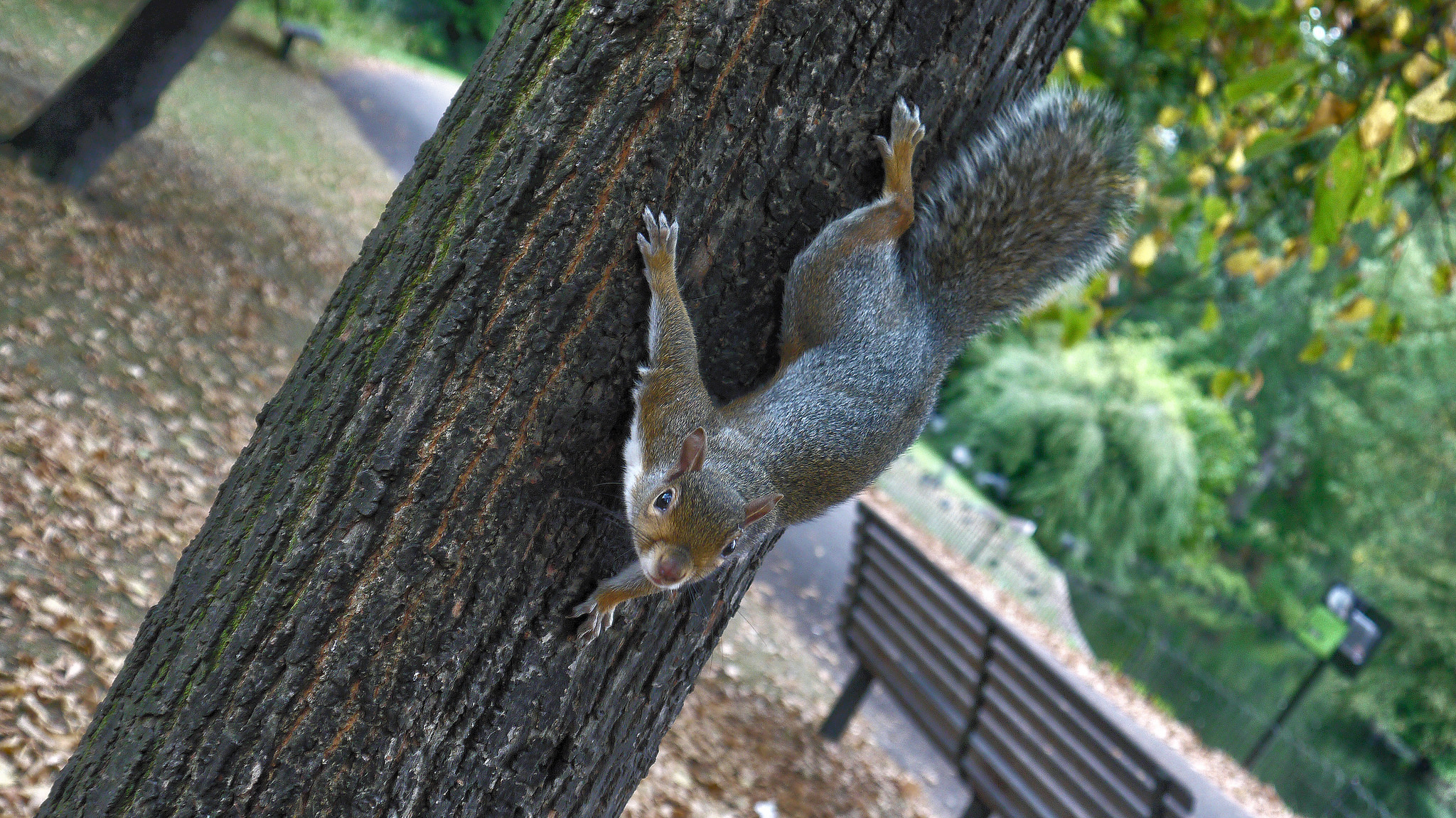 “I’ll bet ya that’s the mom,” I say. “She’s probably nervous to come down here and get him with us standing around. Why don’t we move back?”

“Yeah, but here’s the thing—that cat.” The girl points to a large orange tom prowling around a hedge one house away.

“He’s a killer. That’s why I’ve been keeping watch,” she explains. 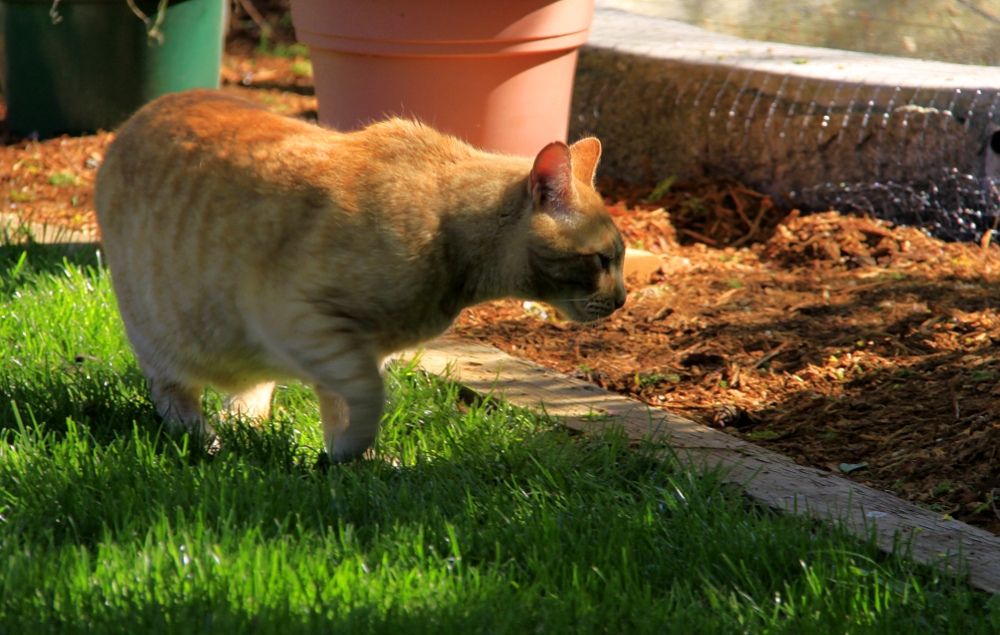 “Great!” I say, thinking, So all’s good here. You got it, kid. I’m already feeling a tad wearied with playing animal rescuer after being made late for work that morning by a bird rescue. I begin to wonder if all the animals in this city are in trouble or if there’s some conspiracy among the wildlife to wait until I’m within walking distance and then find a dire situation to step into.

Survival of the fittest is starting to make a lot of sense to me. I feel my inner ecologist pipe up. The bird I’d rescued that morning was rare, threatened, beautiful—and suffering because of the city we’ve built around ourselves. This baby rodent, on the other hand, fell out of the nest all on his own and—as adorable and helpless as he was squirming in the grass—would grow up to be a pesky sort, no doubt. His cousins regularly bark at me from fence posts; nab the birdseed no matter what odd, sculptural, shrine-like construction we attach to the feeder; flirt with my hunting-inclined pup—the list of annoyances goes on. The allure of a helpless young creature begins to fade away and, for a brief moment, menacing squirrel faces dart before me in my mind. 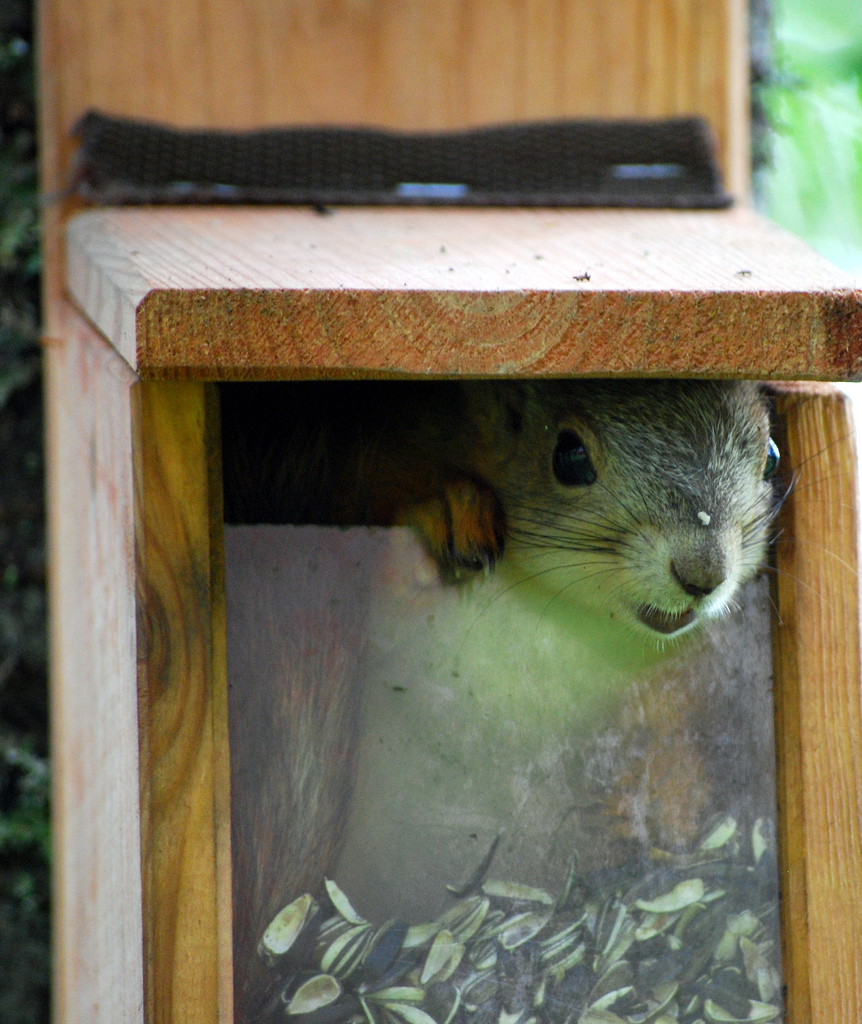 Then Mattie—she’s been introducing herself while I mull over the merit of this rescue mission—pipes up: “So what should we do?”

Oh great. I didn’t realize we were in on this together.

“Well, it’s actually pretty lucky that I walked by,” I begin to brag, “because I have some experience taking care of wildlife.” I leave out that this experience starts and stops with feathered beings.

“We called animal control but they can’t do anything about him,” Mattie says.

Sure, I think, cynically. If the squirrel were dead they’d be here now.

I pick up my phone and begin to dial my Ma. She could drive over with a box—my Ma is cool like that. We could get the squirrel out to a rehabber who would raise him up and release him into a patch of preserve somewhere far from this suburban street. But as I begin to consider those prospects, “survival of the fittest” like a neon sign on the Vegas strip flashes in my mind. I hang up the phone.

The mother squirrel is still overhead. She looks just like a young mom—maybe this is her first baby. She’s flustered up there, with good cause: Her child just fell fifteen feet out of a tree, and he can’t see and there are killer cats and two human people hanging around.

“Squeet!” the baby squirrel cries out.

Mattie and I back off. A lot.

The baby squirrel seems to be panicking. He’s moving fast. Toward the street. As he nears the curb, I run up and throw my backpack in the way, but I don’t block him in time. He stumbles into the gutter, which is swampy from recent rains. I nudge him onto my backpack and he calms, gratefully clinging to the cloth. 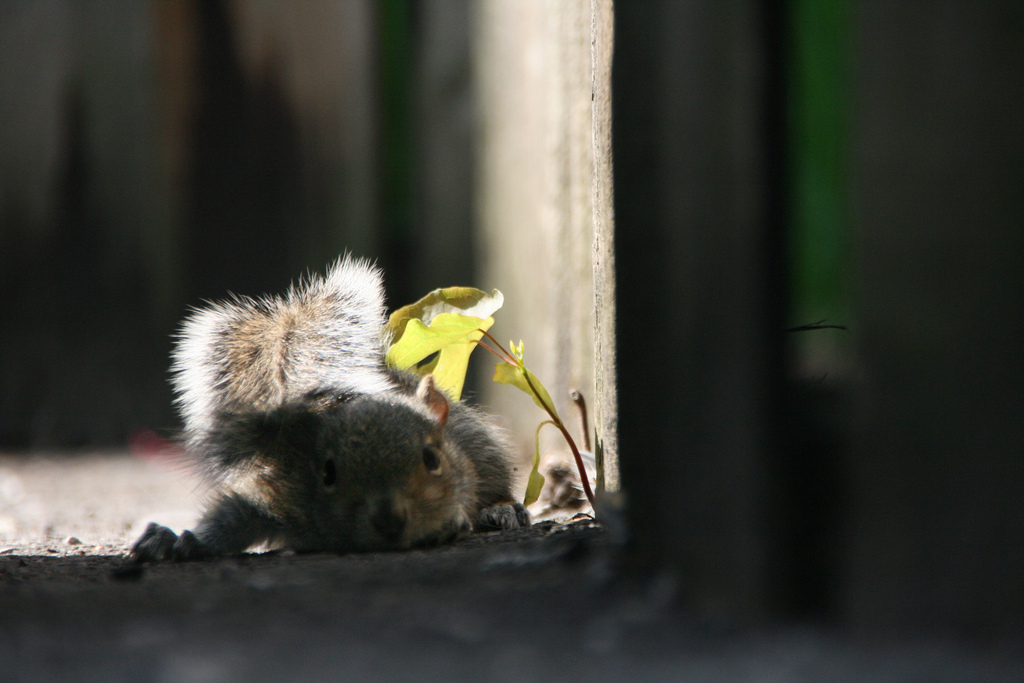 I always talk to animals. I think it reassures me. At least it’s a reminder that we have a relationship.

Mattie looks down at the squirrel and me.

“Um, I think you should probably wash that backpack,” she advises.

“Sure,” I hastily reply. “Can you get me a towel or something to pick him up with?”

Mattie runs up the porch steps of the home in front of which this whole strange scene is unfolding. Oh, to be reclining on that porch right now. I begin to imagine the porch I am heading to once this whole episode ends. The worn, wooden steps I pounded down as my Dad walked toward our house on those August evenings so many years ago.

The mother squirrel above brings me back with a clacking sound. She is stressed out. I sort of wish I could tell her about the bird I rescued downtown this morning, maybe put some things in perspective. But your worst is always the worst. Besides, I’ve learned by now not to try to advise a mom. They know something more than the rest of us. Their bodies bring forth the future.

Mattie races out with a towel and spares me any attempts at human-to-squirrel communication. We cradle the baby squirrel in the folds and set this makeshift terrycloth nest at the base of the tree. Then we retreat to the bushes.

I can tell that Mattie is the kind of kid who gets it. She’s in touch with her animal self. I don’t need to say a thing. She probably didn’t need my advice or intervention, I realize. But in that moment I also realize that she wanted my partnership in this process, and that thought makes me feel really good. Kid approval is wildly underrated.

We both sit in silence and watch.

Sudden and stealthy, the mom is at the base of the tree. She moves in bursts, feverish twitch to stony stillness. She gives the baby a bite at the back of his neck. He reaches his tiny arms around her and in an instant settles into a position that looks, to my human eyes, like total trust. And then they’re off. She moves fluidly with her bulky, bumbling bundle. She swims up the tree, branch to branch to branch back to where they belong. 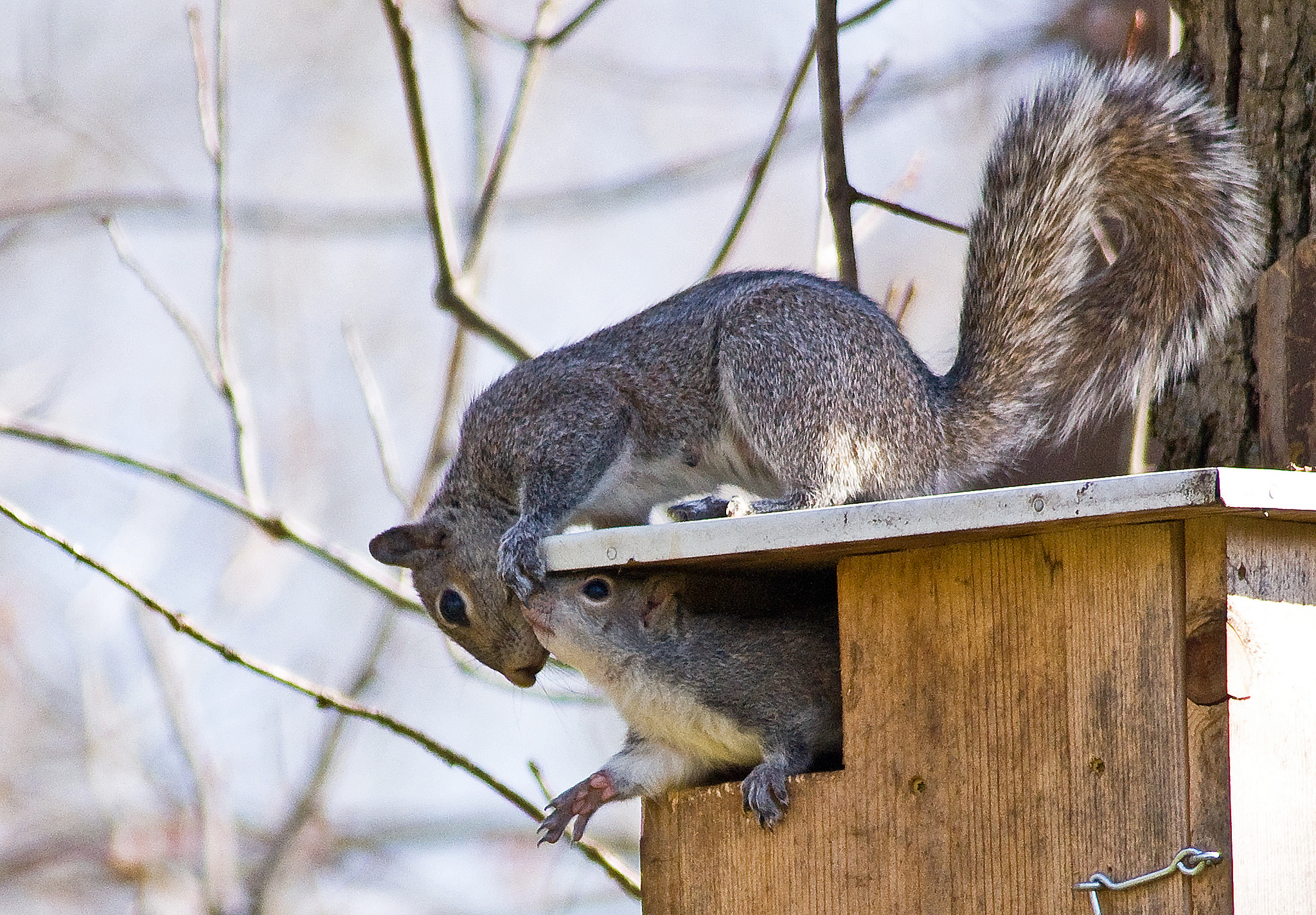 Survival of the fittest. But what is fitness without the dedication and success of those who lead us into this living, breathing world. There were many times when my parents pulled me off the metaphorical ground as I cried squeet. We grow on our parents’ shoulders, and sometimes clinging to their necks. We are the descendants of care. Whomever parented you, you came into this world with someone who would run back and forth on a tree branch for you. You entered this world by the rules of love.

Mattie turns to me, palm raised in victory. We both smile—a silent “congrats, girl”—claiming a bit of this Mama’s success. I pick up my soil-stained backpack-turned-squirrel-rescue-vessel and let out a small sigh for children everywhere and for all the love that carries us to where we belong. Then I step back onto the street and begin walking home.