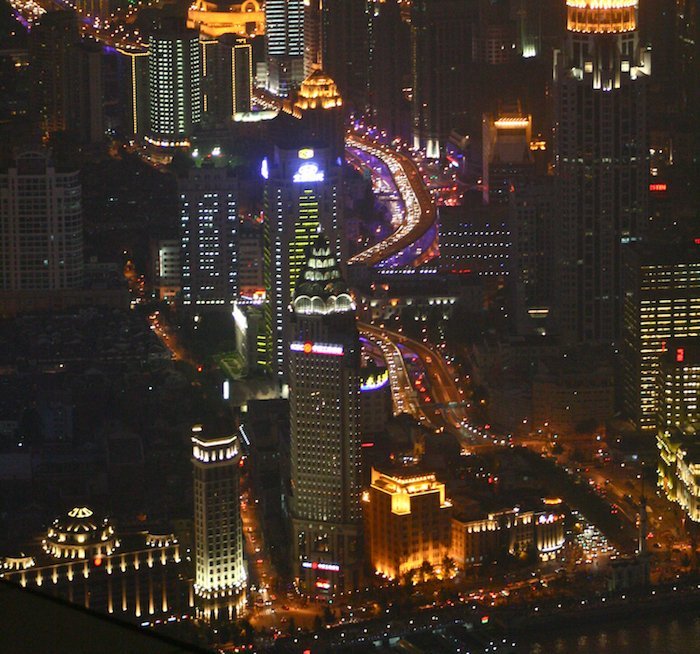 Our world is changing fast—ecologically, economically, demographically, and in so many other ways. Organizations such as the Center for Humans and Nature—and online forums such as this one—exist in part because most of us are disoriented by these changes. We want to talk with each other about what it all means. We’re especially confused about the ethics of it all—what should we celebrate? What should we lament and resist? But the very act of making ethical evaluations is complicated by the fact that these rapid changes change our ethics. How can we plan for the future when we can rest assured that our children will see things differently than we do—especially in Asia and other regions that are embracing capitalism and the transformations it brings.

Let’s start with the graph below, which is my nomination for “most important graph in the world.” It shows GDP per capita from the year 1 to the year 2001, broken out by region. You can see the moment when Western Europe’s economy began to eclipse China’s—that first little bump upwards in the blue line, around 1500, when Europeans developed mercantile capitalism. Europeans created nautical and financial technologies to move vast quantities of stuff around using ships. But that bump is nothing compared to the leap upwards in the nineteenth century as Europe—and even more so the United States—developed industrial capitalism. People learned to make things quickly and cheaply, using factories. 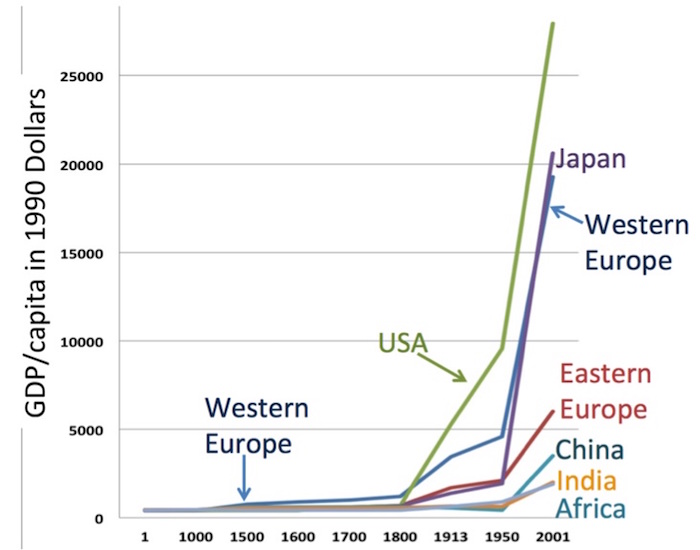 Of course the wealth was not well distributed, and industrialization often has a brutal first phase, but within a few generations, material comforts increased dramatically for the (rapidly growing) middle class, the working class, and eventually even for the poor.

I love this graph because it shows us how capitalism changed the West and Japan in the blink of an eye, and it foretells a similar transformation in the rest of the world. Billions of people are rising out of poverty as globalization connects them to international markets and makes it possible for them to engage in work that creates far more economic value than small-scale farming ever could. In a few decades, billions of people will be as wealthy as Americans are today.

But how does that make you feel?

When I show this graph in Asia, the audiences love it, and seem to take it as an aspirational road map. Educated Asians follow GDP growth rates the way Europeans follow soccer scores; they want their team to win. But when I show this graph in Europe and North America, I often receive more ambivalent reactions. “We can’t just keep growing forever!” some say. “We’ll destroy the planet!” say others. These objections seem to come entirely from the political left, which has a history, stretching back centuries, of ambivalence or outright hostility to capitalism.[1]

I agree that the planet can’t support ten billion people consuming at the level of today’s Americans. But I’d like to point out how capitalist development tends to change values and lifestyles in ways that might be reassuring to those who identify as left-leaning, politically, on social and environmental issues.

The best research on how rising prosperity changes people comes from the World Values Survey (WVS), led by Ron Inglehart and Christian Welzel.[2] The WVS has  collected data on representative samples of people in many countries every six years or so since the early 1980s. They started with twenty countries and are now up to ninety-five countries in the sixth wave of research. They ask more than a hundred questions on topics such as religion, democracy, women’s rights, capitalism, and national priorities.

After each wave, the authors compute the average scores within each country on each value question, and then they do a procedure called “multi-dimensional scaling” to create a two-dimensional map within which countries can be placed. The computer has no idea what the two dimensions mean—it simply aligns countries with similar value profiles, as you can see in the figure below. 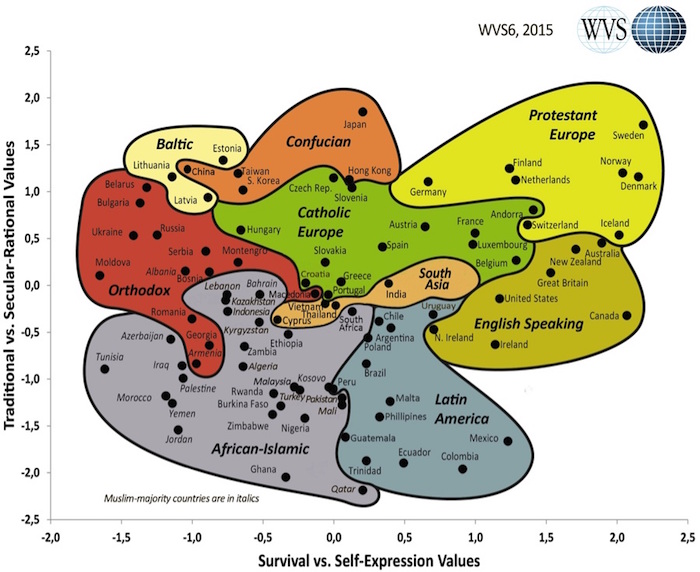 The authors of the WVS interpret the two dimensions, as follows:

The best way to understand the graph is to consider that nearly all societies used to be agricultural societies. Pre-industrial farming cultures generally have traditional and survival values (they cluster in the bottom left quadrant of the map). Life is hard and unpredictable, so you should do your duty, pray to the gods, and cling to your extended family for protection.

But as countries industrialize and people leave the land and enter factories, wealth rises and values shift.  Interestingly, countries don’t just move diagonally, from the poor quadrant (currently occupied by the Islamic and African nations) to the rich quadrant (anchored by Scandinavia, in the upper right). Rather, there is a two-step process. First, countries move upward, from traditional/survival values to secular/survival values. When money comes from fitting yourself into the routines of factory production, there’s little time or room for religious ritual. People express materialistic values in this quadrant—they want money, not just for security, but for the social prestige it can buy.

This, I believe, is the step that gives capitalism a bad name in so many countries, particularly among intellectuals and artists. It sure looks like the capitalists are exploiting the workers (for the capitalists keep almost all of the surplus economic value created), and the workers are buying into it, going crazy for consumer goods, seemingly fueling the cycle of their own exploitation.

But if you just wait a few generations, you usually get to the second step. Societies transition to more service-based jobs, which require (and foster) very different skills and values compared to factory jobs. Also, as societies get wealthier, life generally gets safer, not just due to reductions in disease, starvation, and vulnerability to natural disasters, but also due to reductions in political brutalization. People get rights. The net effect of rising security is to transform people’s values in ways that the modern political left should love. Welzel explains what happens when countries move to the right in Figure 2:

The generation raised with these “open minds” and “expressive values” starts caring about women’s rights, animal rights, gay rights, human rights, and environmental degradation. They start expecting more out of life than their parents did. When women have education and career prospects, they start having fewer children—so few, in fact, that if we set aside sub-Saharan Africa (which will be the last region to undergo this “demographic transition”), the population in the rest of the world will begin declining in just a few decades and will plummet in the twenty-second century.[4] 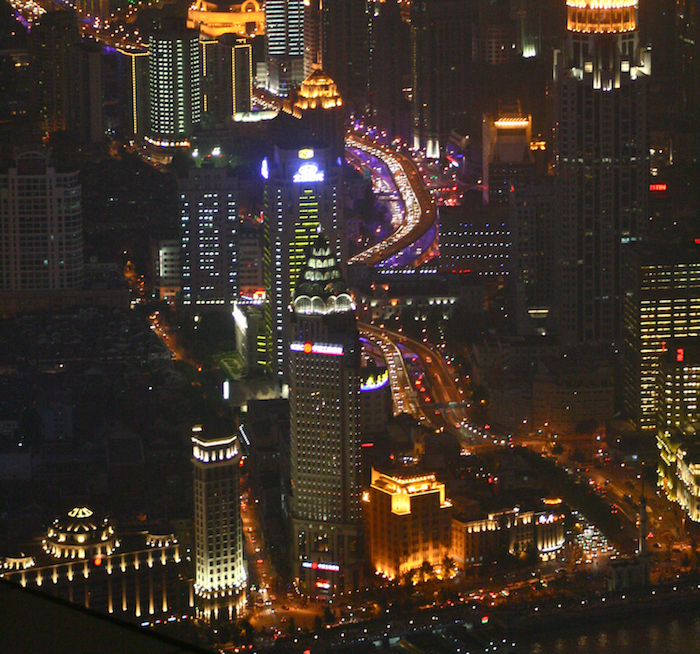 I recently returned from a three-month trip across Asia, and Welzel’s words were like the Rosetta stone for understanding the vast generation gap opening up in  rapidly rising Asian nations. Most Asians under thirty-five have not experienced famine, war, or the fear of being abducted during the night. But most of their grandparents (or parents in some countries) grew up with such existential threats, and their values—the so called “Asian values” that prioritize authority over freedom—don’t sit well in the minds of today’s young people, who have moved to the right along the WVS spectrum.[5]

As people become richer and safer, their values change just as Welzel describes. Young people begin to demand more socially and environmentally responsible behavior from each other and from their governments.  People and countries move in a direction that can only be described as progressive, or left leaning. That doesn’t mean that left-leaning political parties have an advantage—they often get out too far ahead, or too far leftward, of the average voter. And this process works only for social issues—not for economic issues such as taxation and the size of government.

But the general consensus on social and environmental issues shifts leftward (politically), and this is my central point: Capitalism and the wealth it creates changes nature and humanity simultaneously. Any discussion of a “sustainable” or “resilient” future should acknowledge not only the devastation wrought by the industrial revolution and the consumer society but also the progressive environmental values, environmentally-friendly technologies, and shrinking populations that are the inevitable result of economic development. Capitalism changes conscience. Capitalism got us into this ecological mess, back when most people had materialist values and cared little for the environment.[6] But as values and cultures shift toward post materialism all over the world, capitalism might just get us out.

[4] See U.N. projections, including graphs for each region that can be generated at: http://esa.un.org/unpd/wpp/Graphs/. Pick “probabilistic projections” then “population,” then “total population,” then pick regions from near the bottom of the drop-down menu of countries and regions. See also chapter 1 of Bailey (2015) The End of Doom, for why the U.N.’s low-end projections have usually been right, and are likely to be right.