How to Know Where the River Is 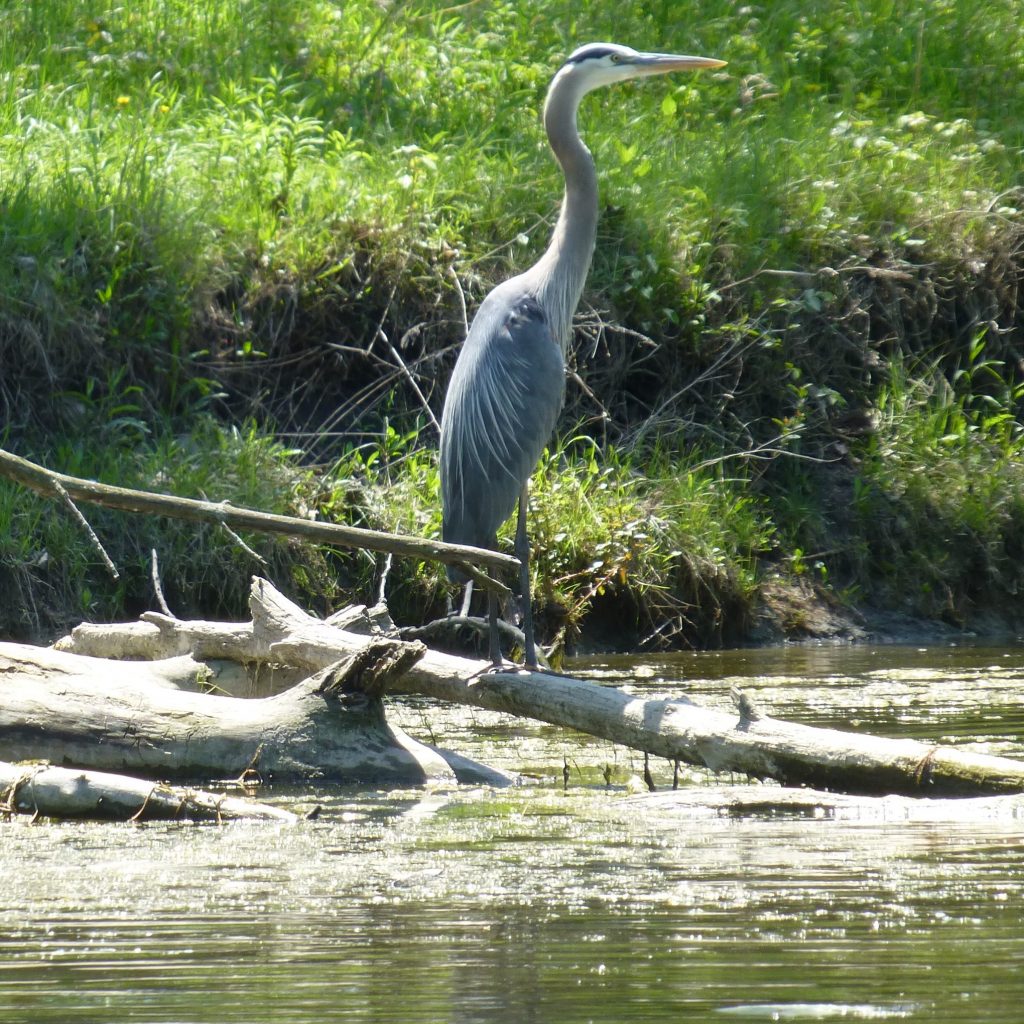 The southeast corner of Harlem and Washington, where I often wait for the bus going north to the school where I work, is irrefutably urban. North across Washington an apartment building edges the sidewalk. Across Harlem is a gas station painted with a green never seen in nature and  fronted with popsicle-shaped yews stuck in a bed of white gravel.

The bus stop itself is backed by a black stucco two-story building, windowless on the Harlem side, formerly housing a small formalwear rental operation that is now theoretically under renovation. Someone may or may not live in the apartment over the store. Just south of this building is a small parking lot. Between building and cars grows an elm, large of trunk, lopped where electric wires run, and far enough back from the sidewalk that one can stand next to it for a little shelter from the wind and road noise. The tree’s base, set right into the asphalt, bears a large scar; between the tree and the building is the detritus that accumulates in such places—pint vodka bottles, discarded fast food wrappers, and lottery tickets. 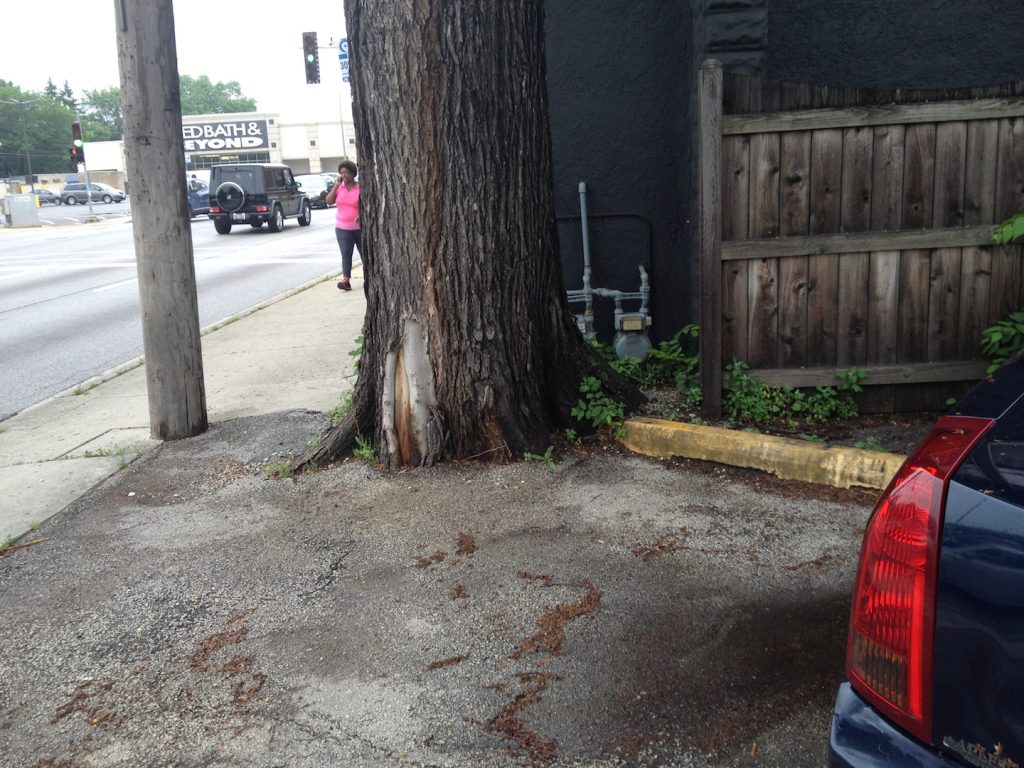 But this tree, remarkable as it is in its green-leafed survival, is not the corner’s main attraction. That would be the surprising variety of large birds in the air on any given morning, especially in spring. There might be noisy Canada geese, several crows, or a couple of gulls. On a sunny, blustery morning, wind from the south, the sandhill cranes will be heading north in what seems to be their favorite flying weather. Another day a red-tailed hawk will be circling. One April day, sky full of clouds, strong wind from the northeast, I saw a great blue heron heading north, angular, tacking the gusts, looking like the Platonic form from which people first developed the idea of “kite.”

From these sights, anyone should know that the Des Plaines River is about a mile or so due west. 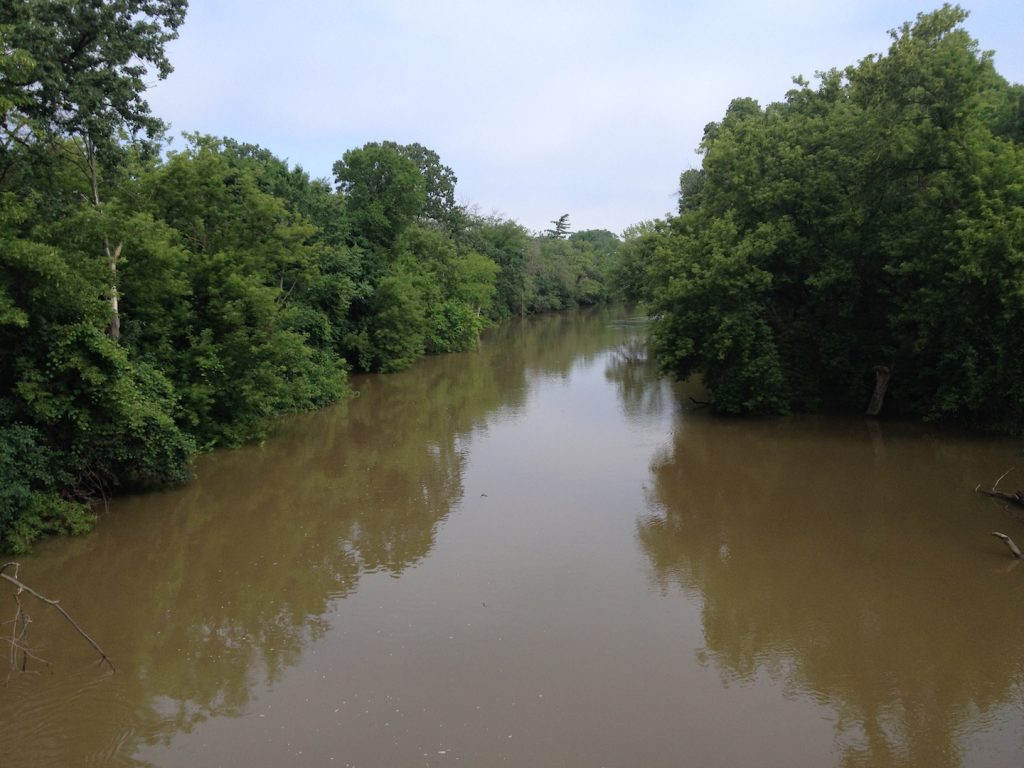 On a humid summer day, if you cycle west towards the Des Plaines, at some point you’ll notice that the smells of exhaust and mown grass and the warm, dusty feel of the air change to a cooler, heavier scent—the green feel of the woods, with deeper, damper notes of more heavily oxygenated air and the slowly moving river.

Walking through these woods, you’ll recognize how the land slopes a little, the soil changes color, and the ground gets wetter. Driving, you may not realize the river is there at all. You’ll speed past a blur of trees, but might miss the road sign bearing the river’s name, if there is one. Where is the Des Plaines River? I’ve sometimes asked students, who, though spending their lives in cars and buildings in the vicinity, couldn’t tell me. Where is the river? What is the river? We might think it doesn’t matter if we know, we might think we are beyond thinking river thoughts. What does it mean for a river to be essential to one’s identity?

Each of us has a river within us, some element of undisciplined wildness, that has its analogue in the landscape. This is not the pathetic fallacy—not mapping our emotions onto nature, but rather acknowledging that nature maps itself in us, and the shape it takes depends on long exposure to physical surroundings. If that landscape is natural, or if we have a natural landscape to which we can return regularly, we are lucky. Such a landscape gives coherence to our innermost selves, which otherwise might be shapeless and fearsome—more like a monster than “that of god within us,” as the Quakers say, when referring to this inner wildness that can guide us. To not have such a place in reality means that inner place, that inner tangle of complexity, has no way to thrive. To not pay attention or to never understand the correlation between human psyche and living landscape, a person risks becoming stunted and sickly—it is a kind of little death.

The Des Plaines is an abused river, an un-natural river. Once it was a sluggish, shallow, wandering body of water, winding by many paths through prairie and savannah. Sometimes in summer it was only five-inches-deep and would dry up during drought. It got channelized in the nineteenth century during the vast effort to control the Chicago region’s abundant water, to make it go elsewhere in this young, post-glacial landscape where water would rather not flow anywhere too fast. Today much of the Des Plaines’ water is piped in from Lake Michigan, used, and sent down the river to the Mississippi. Because we’ve overbuilt, rain has nowhere to go except the river, and then, of course, there are floods and of course we get mad—and spend billions of dollars to manage and prevent what is only natural. Nature can be a harsh teacher; though, considering that nature gives us our lives and way of being, we should make an effort to understand what we are taught.

Having grafted human ideas of engineering and water use onto a complex natural system that functioned perfectly well in its own right, we are now, belatedly, looking at how a nature-based, green infrastructure approach utilizing features such as rain gardens, bioswales, and restored wetlands might work better.  You could say the river is more natural now than it was even twenty years ago. It’s cleaner, and more animal species live in its environs. There are fish and frogs, beavers, coyotes and passerines—and too many deer. Yet the plant community is changing before our eyes: always there are more species from other parts of the world, species taking advantage of warmer temperatures to move north, and new insects like emerald ash borer killing our native  trees. We are living in the new Pangaea.

Adorned with its archaic green ruff, the Des Plaines winds through the street grid like a twisting vein of biological complexity interrupting the product of human logic. Those who visit often, who quiet down, and listen, observe, and learn, will understand what it might mean to live as “naturalized citizens,” Robin Wall Kimmerer’s term for those whom the land has influenced until they become part of that place and its natural community. We might then feel we know our place and why we must step beyond custodial stewardship to the reciprocal caring symbolized by the embrace among friends, the respect between student and teacher, or love between child and parent. Such an attitude, widespread, could help our society adjust to the ancient, newly inescapable requirement that we live in a way that helps nurture ecological health. 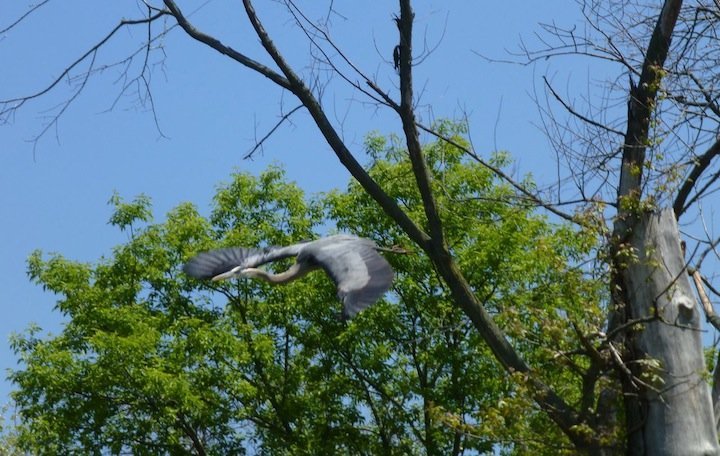 Depending on your personal history and where you live, it might not be a river that tells you who you are. Your river might be a treeless spot at the foot of a mountain, a windblown place in the high plains, or a particular rocky beach on a frigid lake. If you have been well-imprinted, you will always seek such connections. As English nature writer Richard Mabey writes about his process of emerging from deep depression and learning to watch birds again, we must remember, always, to “look up and pay attention.” A thriving tree at a bleak bus stop, with its understory of bittersweet nightshade, lady’s thumb, dandelion, and sow thistle; the sight of a great blue heron angling north-northwest-northeast against the strict north-south grain of the streets—such things as these could remind you of where you really live, which might not be where you think you are.