If “hunting makes us human,” it seems hunting must contain a quality that separates us from our relatives. In the last half century, we have learned that our nearest living relative, the chimp, hunts. We have also learned, with growing clarity, that our direct ancestors were probably better hunters, and became better still as we were honed from something close to a chimp to the so-called “modern” Homo sapiens, the last survivor of many related branches.

As a human hunter, I don’t just kill to eat; I think, dream, and wonder. Why and how did we become this strange cooperative carnivorous being that hunts, kills, and imagines the mind of its prey? The word “human” somehow conveys spirit, mind, and a humane-ness, characteristics that our society does not always associate with hunting.

A few students of human evolution have delineated the many differences between us and our lost cousin and great rival, whose genes we still carry despite its differences with our kind: the Neanderthal. And I remember a throwaway line so casual I can’t remember where I saw it: Neanderthals didn’t keep dogs.

There are many temporary partnerships between species. Most naturalists have heard of the honeyguide, an African bird that leads humans and probably honey badgers to beehives, where it is rewarded by grubs and wax, which it is uniquely adapted to digest. In more familiar habitats, there is a legendary association between badgers and coyotes. In The Lives of Game Animals, Ernest Thompson Seton reported this partnership second-hand. Last year, writer and rancher Cat Urbigkit photographed the real thing on her ranch in Wyoming, following them for two days.

But what species other than ours observes, befriends, trains, and eventually domesticates and modifies “Other Bloods,” to use C. S. Lewis’ felicitous phrase? When did these remarkable partnerships start? 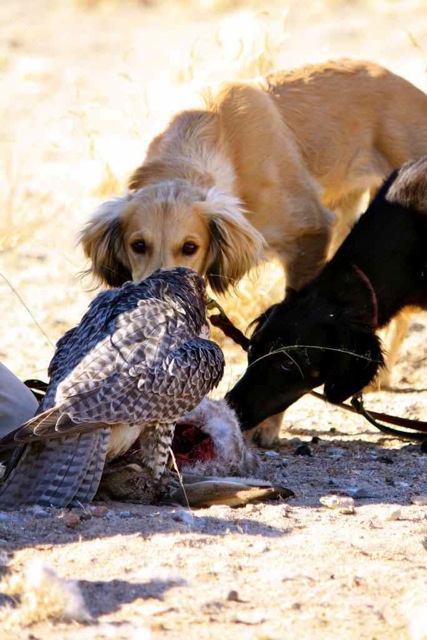 No one seems to doubt that our first non-human partner was the hunting dog. Most scholars think we made our bond soon after moderns left Africa; perhaps when speech became complex, and art began. It is a real bond; dogs, while genetically similar to wolves, recognize a pointed hand better than a chimp, never mind a wolf. The innovative science writer John McLaughlin calls the dog “a social hybrid of man and wolf,” which seems exactly right; the hybridization is a mental construct made possible by a human’s ability to think through a dog’s senses, and a dog’s through a human’s. It may be, if the scholar was right about Neanderthals, one of the intangibles that made our kind. And we did not stop at dogs.

A petroglyph on a low range of basalt hills in the steppes north of Almaty in Kazakhstan depicts an ancient team. Its age is unclear—maybe 4000, even 6000 years old. Until recently, archaeologists seemed to find it mysterious; hunters, both descendants of local nomads and foreign falconers and houndsmen, understand it instantly. 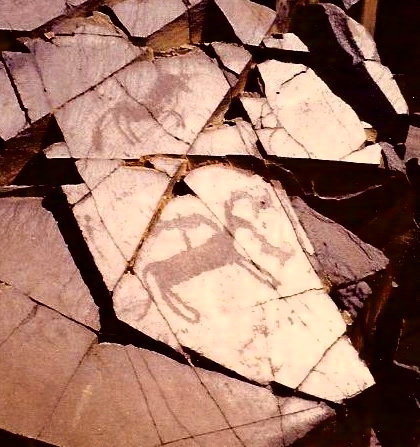 A wild ass stands in the center, bayed by two ring-tailed hounds, one grabbing its nose. Above is a horse with an apparent saddle; behind is a human figure. On the back perches another figure. It is not “a tailless dog standing backwards on the quarry,” as one archaeologist suggested. Apart from the fact that dogs don’t do that, all dogs in Asian petroglyphs have ring tails. Every falconer sees the figure as a bird of prey with its talons sunk into its prey; they only disagree on the species. As the hunters in Kazakhstan and the neighboring countries still use eagles with ring-tailed Saluki-like dogs and horses, I submit that this is the first picture of a local hunting team whose cooperation is engineered by humans, the species that imagines other hunters’ minds.

It is this ability that most paleontologists who study human origins believe is unique to modern Homo sapiens. Whether or not our numerous departed relatives imagined other minds, they apparently did not construct hunting partnerships with them. All hunting humans have dogs, and many use other species too, to this day.

And what is implicit here: they teach other species to speak to each other. For a falconer and dog man, this is a reality he or she observes every day. Birds and dogs cue each other in any training situation. In the traditional age-old Asian-type partnerships, bird and dog, and when appropriate, horse, are raised together from the beginning. My hawks and dogs live together in the house and work together outside. I rear young hawks in a child’s wading pool on my coffee table, where dogs reach in to clean their scraps after they eat. Older dogs teach hawk and pup alike what hares are, and old hawks teach young dogs to mind their manners and not crowd them on their food. 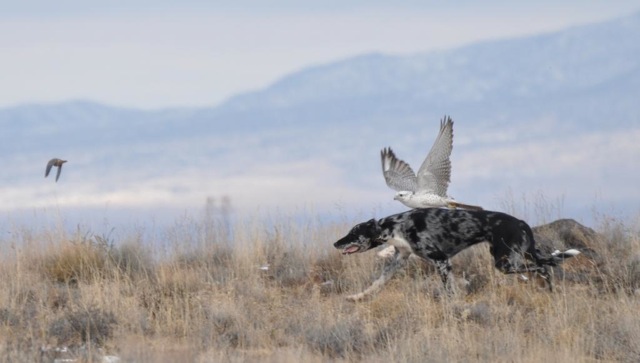 In the field on the American steppe (or as we call it, the Henderson ranch in New Mexico), their cooperation seems miraculous. A falcon will ride on my hat or on my fist, fly out and reconnoiter, and return. The dogs make long loops from left to right ahead of us, hoping to bump a hare (or as we are likely to call it, a jackrabbit). When the hare flushes, the dogs pursue and attempt to occupy its attention while the falcon climbs for enough altitude to deliver a rolling strike. At full speed, the canine hunters have enough stamina to move the hare for a mile or two, but the hawk has only enough in the short term for two or three stoops. If she connects, with a hit like a shotgun blast, the hare will likely fall dead or mortally wounded. But if she misses three times, the quarry is virtually safe. 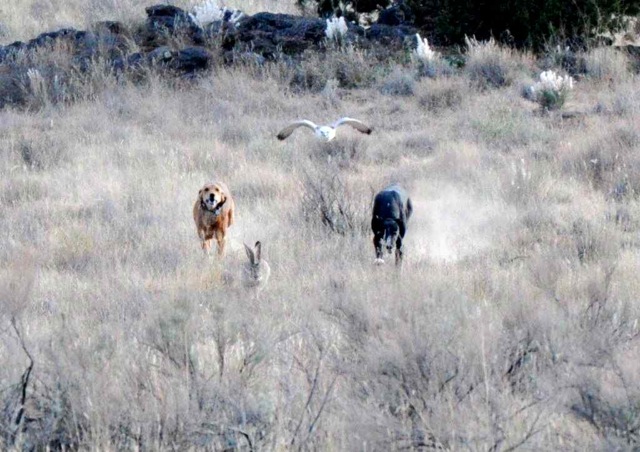 If the dogs do not produce a hare, I have seen a hawk strafe them in frustration. After the chase, the dogs will politely sniff under the hawk’s tail as she sits on the ground; she will tilt her head at the dogs in greeting. I had one hawk who fed tidbits to the dogs at the end of the season, when hormones announced nesting was imminent. I have even seen dogs rolling on the dead hare, sharing it with their slightly exasperated avian pack member.

I submit this amateur’s observation as a proof that hunting, at least in old ways, helped make us human. We are still the only creatures who have evolved multi-species hunting bands of happy companions. 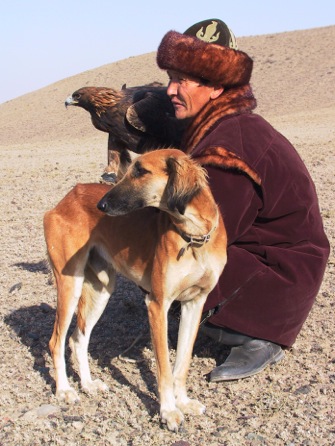