Hunting Traditions in Europe—The Way of Life for Hunters

From the legend of St. Hubertus, patron saint of hunters: “wildlife must not be just hunted, but equally important is the conservation and understanding of the importance of wildlife in nature and based on this, the restraint of one’s passion.”

I am hunter. I grew up in a hunting family. Most of my childhood was spent in the forest with my grandfather and father, the most important people in my life as a hunter. They taught me how to behave in nature and respect wildlife, and how important old hunting traditions are for us all.

Hunting is an inseparable part of life and has been since the dawn of humankind; it has, for example, assisted human development and progress. Hunting and all activities associated with it are very important intercultural phenomena—not only in Europe but throughout the world.

How did hunting and associated traditions develop in Europe? The community of hunters in most European countries consider hunting not only a hobby, but also a lifestyle and mission. For most of them, it is not just about the joy of the quarry, the kill, or the trophies; it is about the honor of being hunters. It is an honor to belong to a group of people associated with nature and its resources. Is there a simple answer to the question “Does hunting make us human”? No, but the answer can be found in European hunting traditions and in the way of life that hunters lead.

Hunters in Europe and around the world struggle daily with the media and especially with many non-hunters, particularly about whether their hobby and style of obtaining food is ethically and socially acceptable. So, what is more human: a) hunting deer in the woods in such a way that it does not feel threatened before the shot is fired, or b) breeding animals solely for meat and in often appalling conditions? This is a question that we hunters are asked on a daily basis by those who claim to be guardians of nature and of animals. Many of them have no idea what the role of hunters is in the forest and what tasks they need to carry out in hunting areas throughout the year in order to be hunters. It is mostly hunters who call for the protection of endangered species, and equally it is often they who deserve credit for wildlife conservation. 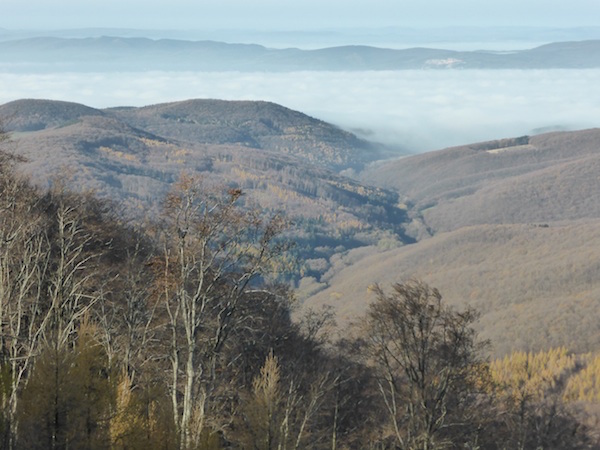 An example of this is in my home country, Slovakia, where, after two world wars the state of wildlife was alarming. At that time, there were no conservationists, and the credit for the increasing game populations went to the hunters, who were already a well-organized group. Thanks to their excellent monitoring and sustainable wildlife management, it was possible for hunters to stop the decrease in game populations and, in fact, to increase their numbers.

Urbanization puts a great deal of pressure on the whole area of Central Europe. Wildlife here is under constant stress from increasing human populations and expanding industries and infrastructures. Throughout the area, there are only a few small patches of untouched nature. Today, therefore, the sustainable management of hunting is so important, and the respect for hunting traditions provides a bond between hunters and the landscape. This bond is preserved through the rituals and traditions associated with hunting.

The preservation of old hunting traditions starts with what is known as the “communion.” This communion is the first of all hunters’ moral and ethical promises to behave, with utmost respect, towards wildlife and nature. The basis of European hunting traditions and rituals is the respect towards wildlife and to the game that is caught. This “respect” is an important part of the hunter’s life throughout the year, not just during the hunting season. Hunters manifest this respect in many places and manners: in nature, in the forest, through hunting, on social occasions, and also in their personal life. The sustainable use of wildlife and sustainable hunting management take place in the majority of European countries. Deer in the wild feel the stress of civilization. Hunters in Europe are amongst those best able to alleviate the pressures that are placed on wildlife. The reward for hunters is the opportunity to spend time in nature and to hunt. In turn, hunters also show the proper respect for wild game. 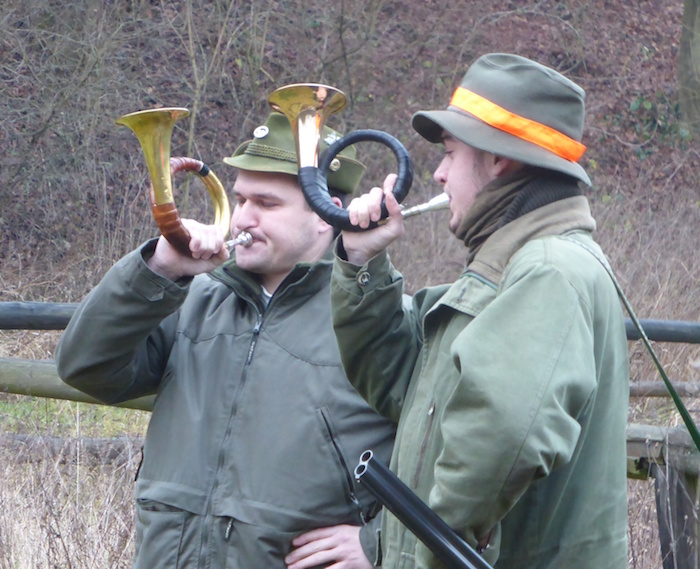 The clothing worn by European hunters when out hunting is also important. Even clothes used for working in nature are always green. For driven hunts, hunters are often dressed in uniform, and it is considered impolite to come wearing dirty boots or to be late. Driven hunts provide an opportunity for friendly gatherings, with all activities being announced by horn blowers and other hunting signals. After a hunt, whether an individual or driven hunt, hunters pay their respects to the game taken. During the closing ceremony—the game bag—the game is laid down, with its right side facing the ground, in a rectangle defined by pine branches. There are fires at each of the four corners. With this presentation, hunters say goodbye to the game and show their appreciation for nature. Each downed animal has a small branch most often from a pine tree, in its mouth representing its last bite. When taking the game from the place where it was caught, the hunters point the animal’s head toward the natural area so that for the last time it can look at the place where it lived. 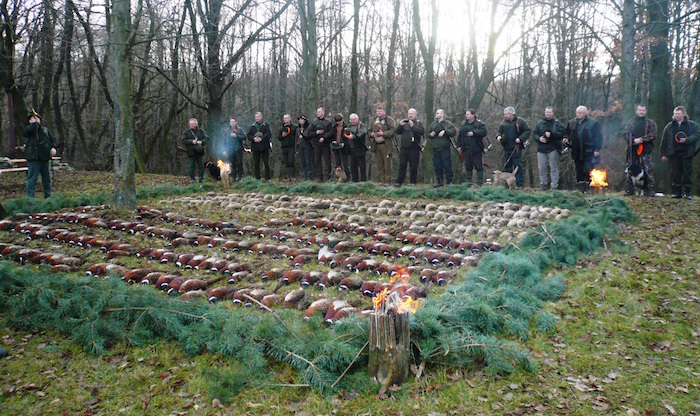 Women play a very important role in European hunting nowadays. In the past, women participated mainly in the activities that followed the hunt. In the countries of former Austro–Hungary, women participated in the social activities of hunting. In the 19th and early 20th centuries, hunting in Europe underwent a final development, and so-called “exclusive hunting” was transformed into a professional activity focused on breeding and the quality and comprehensive care for game animals.

Today, as more and more women work in positions and choose hobbies that were previously dominated by men, the number of active female hunters is constantly growing. In Austria, for example, there are more than 11,000 registered female hunters. Hunting is traditionally widespread in rural areas, and women in Austria increasingly hunt and participate in public hunting life. The number of registered huntresses in Eastern European countries is also increasing annually, although their activities are connected to events organized mainly by men. The Nordic countries, too, are well known for their high numbers of hunters per capita. For example, there are more than 15,000 registered woman hunters in Sweden. 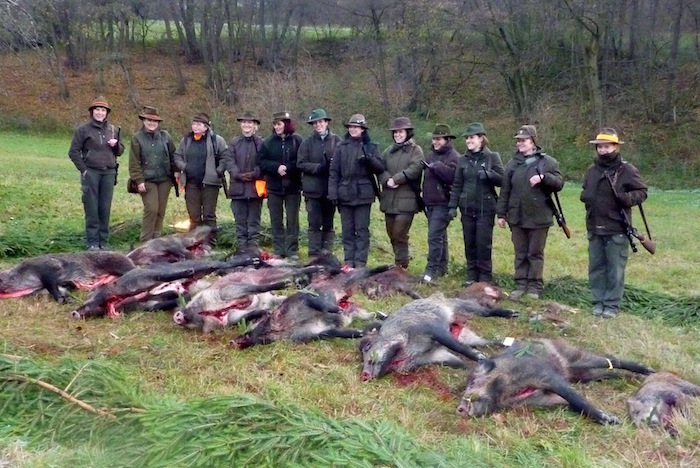 Women also occupy an important place in falconry and hunting cynology, faring well in competitions and serving as judges of various dog events and field shows.

In addition, women are active in many areas related to hunting: education, work with children and with youth, shooting, and fashion. In the countries of Central and Eastern Europe, women regularly organize workshops—to which both men and women are invited—focused on processing and cooking wild game. They exchange recipes and host culinary competitions. Women help convey the elegance of hunting and inspire men to take greater care of their garments and uniforms. Some young women become hunters even without any such family tradition, often thanks to their partners.