In and Out of Place—Reflections on Castor canadensis; or, Leave It to Beaver? 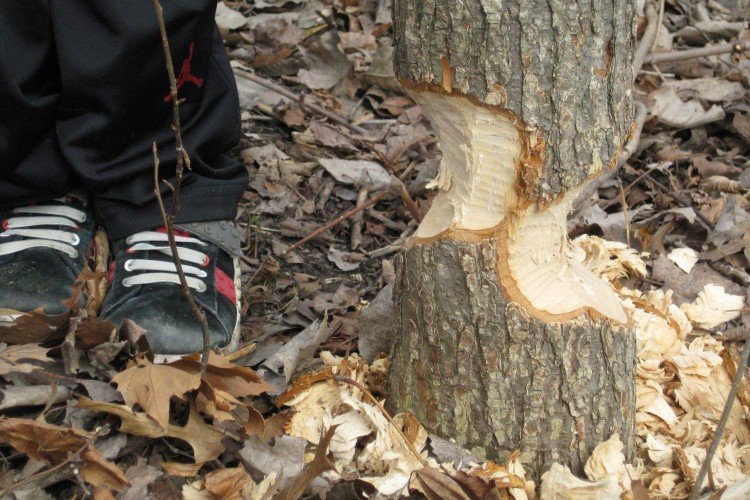 The second largest-bodied rodents in the world have arrived where I live, in Evanston, Illinois. Actually, they’ve probably been here for a while, but my first encounters have been recent. For those who don’t keep a chart of rodent size-rankings handy, I refer here to Castor canadensis, commonly known as the North American beaver.

This is a creature whose plant-based diet sometimes results in sixty or more pounds of furry girth. Fur and rotundity can do amazing things for an animal’s public charisma. Beavers, along with squirrels, are one of the few rodents that most people willingly tolerate in close proximity. Many people would even call them “cute.” (I’m admittedly one of them.) Evanston’s fur-bearing newcomers are intriguing—beyond the cute factor—because of the site they chose to call home. Their colonization efforts are located in a section of the Chicago River that was created exclusively through human industry—the North Shore Channel. A very readable history of the Channel, as well as the entire Chicago River, can be found in Libby Hill’s book, The Chicago River: A Natural and Unnatural History. The “channel” was cut between 1907-1910, and its purpose, as Hill remarks, “was simple, to get rid of the decomposing and noxious filth in the Chicago River’s North Branch.” The quality of the Channel’s water has improved from its early open-sewer days, though lap swimming would not be an advisable (or legal) risk to take.

Too straightly built to fool anyone into believing it’s a naturally occurring river, nonetheless, the Channel is one of those places that can transport a person into the urban wilds. I found this out first-hand. For Father’s Day, my family gifted me with a casual canoe trip on the Channel. Putting in at the Evanston Ecology Center, we lazily paddled “upstream” to the landmark dome of the Baha’i Temple in Wilmette. Along the way, we met with bustling swallows under the Metra overpass, saw our share of mallards, glimpsed the blur of a lone kingfisher, and watched a Great Blue Heron waft broad wingstrokes above our heads as he sought less canoe-infested waters. Our canoe trip was, at least in part, testimony to how the Channel has been repurposed by humans for non-sewage related experience. Now beavers are seeking to further the Channel’s redevelopment in their own way.

It feels fitting to me that two kinds of construction have come together—an artificial canal, originally (and still) intended to deposit unwanted North Shore citizens’ effluent into the Chicago River, and the incipient foundations of a beaver outpost. Chain-link fence runs the length of the riparian corridor, barring human access, but beavers—apparently less picky about the public health concerns of their swimming holes—have managed to find new homes in this human-engineered waterway. The laborers who built the North Shore Channel over a hundred years ago certainly didn’t have beaver habitat in mind when they engaged the ditch-diggers, yet the beavers have accepted the unintentional offering, thank you very much.

For this, and for more general reasons, I am an admirer of beavers’ resourcefulness. Beavers were extirpated from Illinois by the early twentieth century. But they have made an epic comeback. These toothy furballs can now be found in every single county of the state.

And they can be found, sometimes with consequent shock, in Chicago proper. An acquaintance told me about beavers who furtively criss-cross the parking lot of the Holiday Inn Mart Plaza in downtown Chicago, in a hunt for edibles. These beavers, in the act of foraging for late-night shrub snacks, have been known to surprise the car keys out of the hands of unsuspecting hotel guests. 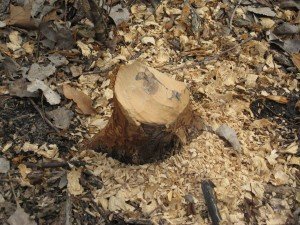 Downtown Chicago or elsewhere, my first inclination is to welcome beavers anywhere they can swim or waddle to on their own. Granted, I don’t have a favorite cottonwood tree sitting streamside (the equivalent of a strawberry frosted cupcake in the school of beaver culinary arts), or a farm to protect from becoming a wetland, or a need for a startle-free parking lot, so my stake is solely based on seeing wildlife diversity increase.

Given beavers’ more than 100-year absence from the lives of most Illinoisans, especially urbanites, the first thing we might feel about beavers’ modest return to places they once inhabited is hope. (Pace Emily Dickinson; hope may not only be a thing with feathers but a thing with a flattened-tale that can crack the water like a canoe paddle.) Perhaps the system is getting better, I think to myself; maybe our cities are becoming more “natural,” maybe the beaver is a package of living aquatic furball evidence that humans can willingly reside in the midst of a greater variety of animal life than previous generations of cityfolk.

But before I’m accused of writing a rodent fluff piece, I need to qualify my beaver kum ba yah.

Both humans and beavers leave prominent marks on the land (and water). Both can also dramatically change the ecologies of the places they choose to call home. Beavers are second only to humans in the extent of habitat altered (albeit the distance between first and second place is immense). Because their industrious ways often create wetland habitat for an entire suite of other species,  beavers have been labeled “ecological engineers.” The benefits of their work are well documented in the areas to which they are native. I first learned about beavers in this context—for their positive roles in creating dynamic ecologies and opportunities for biodiversity richness. But that kind of scenario more accurately describes beavers in, say, Yellowstone National Park, where a few (or a lot) of downed aspen and willow trees have time and opportunity to regenerate after the beavers inevitably move on to new food sources.

What about urban areas? I’m not a biologist but I had a hunch that having beavers in urban environments wasn’t unambiguously positive. So I called Steve Sullivan, urban ecology curator at the Peggy Notebaert Nature Museum, who offered a more sobering perspective about welcoming beavers with open arms (and ponds). Steve related to me that there’s been a bit of back-and-forth between land managers and beaver aficionados; more specifically, the spat is over a series of beavers that have set their minds on making North Pond a dinner table.

North Pond is a nature sanctuary, a thirteen-acre oasis in the Lincoln Park neighborhood that hosts, among other dependents, turtles, waterfowl, butterflies, migratory birds, and … and here’s the problem: a landscape anchored by mature trees, including revered, long-lived willows. Like the North Shore Channel in Evanston, Chicago’s North Pond is entirely a human construction and yet has become critical to a great number of fauna. As a microhabitat surrounded by a densely concrete landscape, North Pond cannot become a wetland—which is exactly what beavers will unswervingly aim for. In the meantime, if the beavers stay then the trees will fall, because beavers, like all of us, gotta eat. With the felling of the trees, the result would be an urban pond denuded of its key vegetation and therefore some of the key species that depend on it. In other words, instead of creating dynamic habitat over the long-term, the beavers would be reducing the regenerative capacity of this urban ecosystem, decreasing overall biodiversity, and then moving along once the edible stuff is gone.

Here’s the larger problem: because humans are unambiguously the number one ecological engineer, we’ve initiated a lot of landscape-wide changes, and the impacts of these actions upon other species is too often an afterthought, if it is a thought at all. We’ve largely appropriated both stream and forest, pond and field, even the rock and sand below and the air above, without regard for other species. I don’t fault anyone for thinking that beavers deserve an opportunity to exist, even in the heart of the city. However, that’s where the conversation should begin; from there, we must consider not only our moral responsibilities to beavers but to the larger well-being of the habitats we share.

This past week, I had the chance to linger on the banks of the North Shore Channel. I was there for a closer, more intensive look at the place where, many months prior, I’d first spotted scattered piles of tree bark shavings that clearly showed that beavers had come back to Evanston. I found a lot of beaver sign. Small trees toppled over and lying prone; the bases of large ashes gnawed half-way through. A stump, two-feet in diameter—with the telltale hieroglyphics of incisor grooves—coning upward to a ragged point. Some impressive work. I also discovered four separate beaver lodge openings dug into the embankment.

But something seemed awry. Three openings were covered with a patina of dulled maple leaves and broken twigs, the remnants of fall. I got down on hands and knees to get a closer look at an egress/ingress a few footsteps away from the languid water in the Channel. This hole was the only one that still appeared as though it might have been in use. I saw no tracks in the slippery soil, however. (I tilted my head upside-down between tree roots to peer as far as I could down the dark passageway, and despite not seeing tracks, I did have a vision of an angry beaver scampering out and tilting me into the water like a scene straight out of a screwball comedy. Fortunately, all remained calm.)

With the knowledge that a city’s animal control bureau might have reason to cast a disapproving eye on beaver loitering, I wondered if what I observed was a crime scene. Perhaps the aged beaver chews, as well as the lack of discernible tracks or fresh leavings, were clues that pointed toward an abduction. If so, there would be no beaver profiles on milk cartons. No 9-1-1 calls. Here and then gone.

The explanation could be simpler of course. Abandonment rather than abduction. Sensing better prospects on the urban frontier, the beavers could have pulled up stakes and moved up-channel to tastier meals. Or, it is possible that the beavers are currently holed up and prepared for winter like good Boy Scouts, with a fully stocked lodge of foodstuffs, awaiting the coming of spring greens.

One last possibility: they could have begun the journey down the Channel, following the gentle current to where it meets the North Branch of the Chicago River. From there, they might have swum still further to reunite with second-cousins-once-removed in Chicago—relatives who are currently putting the fear of beavers into people who only want to get to their cars without incident in hotel parking lots.