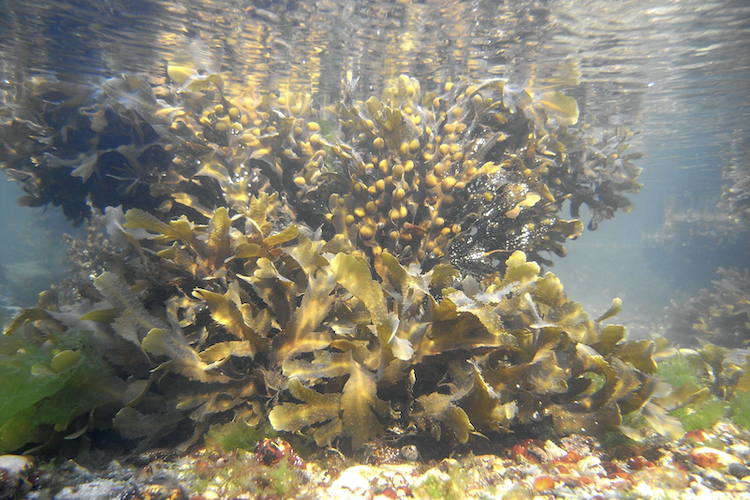 At the seaward fringe of my coastal city, there is a place that defies the rigidity of hard edges and boundary lines. In this place, where the ocean licks the land, a colorful and lively community thrives in an ecological borderland.

In tune with the clockwork of the moon and sun, the ocean pulls herself back twice each day. In doing so, she unveils the microcosmic worlds of urban tidepools—worlds that occupy the liminal spaces between land and sea and between city and submarine wildlands.

It is within this marginal strip of waterlogged earth that I find myself, ankle-deep in a Central California tidepool, probing a melon-sized sea anemone with my pointer finger.

How does my skin taste? I wonder, as the anemone reacts immediately to contact with my inquisitive hand.

A microscopic battle scene ensues. His receding tentacles shoot harpoon-like stinging cells into my outer layers of skin. Human skin, however, is far too thick to be penetrated by these poisonous harpoons. I feel no pain, only mild amusement, but the anemone’s attack mechanism is effective in grasping ahold of my digit and pulling me deeper into the anemone’s grip. Catch of the day! I imagine the anemone cheering to himself, as he engulfs my fleshy finger.

Sea anemones, despite their passive appearance, are voracious carnivores who will devour any small animal that is careless enough to be captured in their tentacular vice. They have a singular opening, which serves as both mouth and anus, and digestive enzymes so strong that they can dissolve the flesh of a small animal in as little as fifteen minutes.

With a swift finger-twist and some wriggling, I squirm my finger free and evade the unlucky predator. Anemones in these highly-trafficked tidepools, I suspect, must be well acquainted to the teasing and pestering of curious human hands.

A quick browse in my water-warped field guide reveals intimate secrets of this otherworldly beast’s existence. Anthopleura sola, the nifty guide explains, is also known at the Sunburst Anemone.

The name seems fitting. Dozens of brown lines, assembled in pairs, radiate outward from the anemone’s frilly central opening across his verdant oral disc. The brown lines dissipate at the critter’s circumference, where five rings of tentacles stretch themselves outwards. These tentacles fade from pale green to pale yellow to frosted lavender tips.

The spectacular brown and green coloration in the Sunburst Anemone, I read in my guidebook, is caused by symbiotic zooxanthellae that live within the anemone’s gastrodermal layer. The name “zooxanthellae” rings a bell in my memory from my introductory marine biology coursework, since these are the same types of microbes that live inside the flesh of coral reefs. Zooxanthellae, like plants, harness energy from sunlight to produce food. It is the loss of these photosynthesizers from anemone-like corals that brings about the bleaching and death of coral reefs.

Gazing into the brilliant colors of the Sunburst Anemone is a lesson in the wonders of symbiotic entanglement. In tandem with their carnivorous habits, anemones also depend on the nutrients that zooxanthellae generate from sunlight. In return, the anemones provide housing, protection, and other nutrients to their green and brown photosynthetic companions.

In symbiosis, anemone and zooxanthellae live together in collaborative association; the destiny of both partners is bound to that of the other.

According to my field guide, the Sunburst Anemone lives from the mid-intertidal to subtidal zones and has a geographic range stretching from Baja California to Bodega Bay. However, my field guide is eighteen-years-old, therefore outdated, and I scribble in the margins to correct this range. These days, Anthopleura sola has been found by intertidal researchers as far north as Kibesillah Hill, a 119-mile-drive north on California’s coastal highway from the guidebook’s supposed northern boundary. It is possible, but not yet proven, that changing ocean temperatures are playing a role in the northward expansion of this species’ geographic range.

This change in distribution is one of many errors in my guide, and the accompanying scribbled notes that fill the margins of my book are a reminder of the coastline’s dynamic nature.

The intertidal zone, like any ecosystem, is always in a state of flux. Intertidal areas can be particularly dynamic, since they are subject to disturbance from harsh weather, waves, erosion, and other coastal hazards.

Warming waters, acidifying seas, rising sea levels, introduced species, and wildlife diseases are also at play in the shifting worlds of the intertidal. Only seven years ago, the sea star populations in these pools and all along the west coast were decimated by a wasting disease outbreak. From California to Alaska, tidepool lovers began to find lesion-covered echinoderms liquefying into sea star goop before their eyes. Researchers later revealed that the cause of the outbreak, sea star-associated densovirus, was most likely triggered by warming ocean temperatures. The mass death of sea stars, a top predator within the ecosystem, continues to ripple through these dynamic ecologies in unusual and unexpected ways.

Where warming ocean temperatures may offer an opportunity for range expansion for the Sunburst Anemone and his kin, these tepid waters also take away possibilities and futures from disease-vulnerable sea stars.

One of the particularly devastating consequences of sea star declines has been the decimation of offshore kelp forests by swarms of hungry sea urchins. These disappearing underwater forests are not only biodiversity hotspots, but they provide urban seashores with vital shoreline protection from large waves, rising sea levels, and increasingly violent storms. If sea stars and kelp disappear from these shores, then humans, too, may be forced to retreat from the urban waterfront.

In this boundary-defying place between land and sea, anemones, zooxanthellae, sea stars, and humans are tangled into complex webs of relation. For city dwellers like myself, noticing the rapid changes taking place in our urban tidepools reminds us of the symbiotic relationships that weave together the fates of all living beings.

A high-pitched staccato—a black oystercatcher’s alarm call—pulls my attention away from the guidebook marginalia and towards an adjacent pool, where an orange-colored sea star sprawls lazily in the sun atop a bed of mussels. Sea star numbers have partially recovered along this stretch of coastline, and I greet the star with admiration, a smile, and a blend of both grief and hope.

Each day, when gravity pulls the ocean away from land at the edge of my coastal city, I also find myself pulled away from the comforts of solid ground. These tidepools have become my place of refuge during the anxiety-ridden times of global unraveling. They invite me to realign my internal clock to the rhythms of the moon and sun and tides, to turn my attention to the wonders of other earthly creatures and to lives so very different from my own.

To bid farewell, I extend my finger to meet the anemone’s partly-retracted tentacles. As we explore the fleshy otherness of warm skin pressed against cold, the rigid boundaries between our saltwater bodies slowly begin to dissolve.